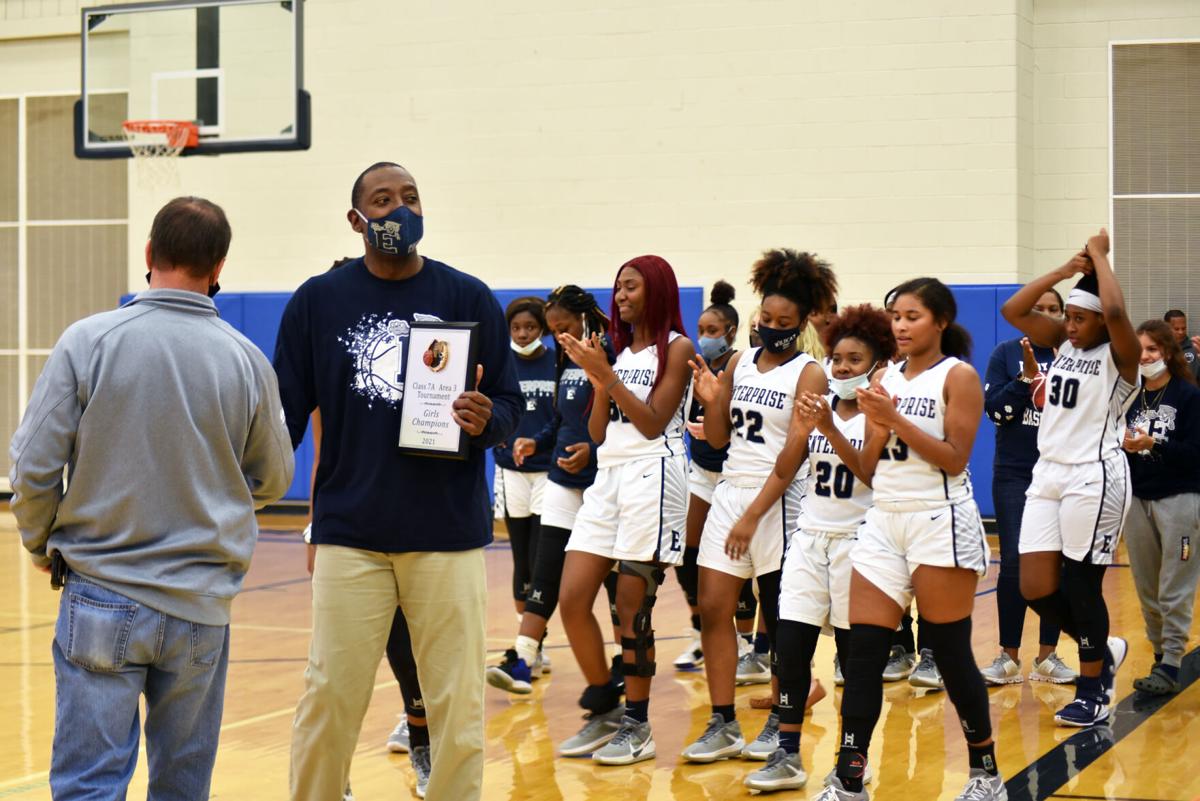 Head Coach George Scott and the team walk onto the court for the award presentation after defeating Dothan 48-39 in the Class 7A, Area 3 championship game. The girls will get to host a game in the Sweet 16 against Theodore sometime later this week. 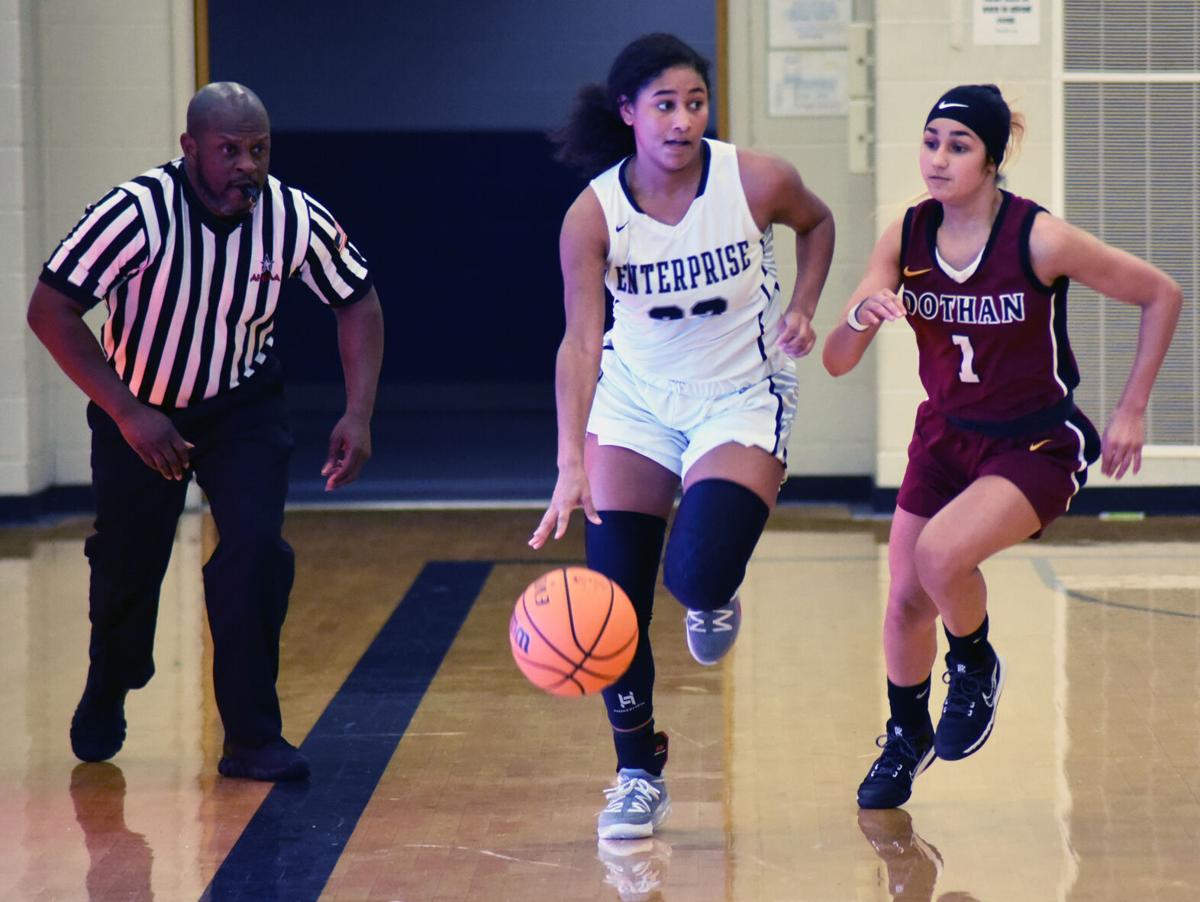 Enterprise's Jadyn Williams matched up with Dothan's Jadalie Medeiros after securing a rebound in the first half of Friday night's game.

Enterprise girls basketball coach George Scott said Jaida Gosha has played like a “beast” for the Wildcats in the last few weeks.

The junior post player certainly played like one in the second half of Friday night’s Class 7A, Area 3 Championship game.

Gosha scored 19 of her game-high 27 points and earned 10 of her 13 rebounds in the final two quarters, and the Enterprise defense contained Dothan in the third quarter, sparking a 48-39 win at Enterprise’s Wildcat Arena.

The victory gave Enterprise its first area tournament title since 2014. The Wildcats (13-7) will host a sub-region game against Theodore, likely on Thursday night.

“We have worked hard for this for a long time,” Scott said of winning the area crown. “The girls stayed strong, stayed tough and we got it done. It means a lot to us.”

The Wolves (9-7), meanwhile, will have to travel to Baker for the sub-region round, also likely on Thursday. Baker won the 7A, Area 1 title on Friday, beating Theodore 57-42.

After a slow-paced and turnover plagued first-half that finished with Enterprise up 15-13, Gosha and the Wildcats dominated the third quarter,  outscoring the Wolves 18-5 to take a commanding 33-18 lead.

Gosha scored 12 points in the quarter, sparked by two putbacks and two other baskets down low off entry passes inside, and earned six rebounds in the period. She also converted 4-of-6 at the foul line in the eight-minute session.

Gosha would add seven more points and four rebounds in the final quarter.

“Gosha has been stepping up for the last three, four weeks,” Scott said. “She has been an absolute beast, a monster, on the inside and dominating every team we have played (lately). I expected no less from her today.”

“Honestly, we couldn’t stop No. 30,” Benjamin said, referring to Gosha’s jersey number. “That was the bottom line – we couldn’t stop her. She scored almost at will and she cleaned up the glass. She rose up and did what she was supposed to do.”

The Enterprise defense also stepped up in the third quarter. The Wildcats held Dothan without a point for five plus minutes to start the period and to only five all overall while creating seven turnovers, five off steals. The defensive work plus Gosha’s offense helped Enterprise open up the lead.

“At halftime, we knew we needed to really pick it up offensively, but we also knew we need to shut them down,” Scott said. “The girls responded to the halftime discussion we had.”

Gosha opened the third quarter with a defensive rebound after a Dothan miss and scored down low on the other end after Wildcat passing beat the Wolves’ press.

Gosha helped pad the lead to 19-13, hitting 1-of-2 free throws on two different trips to the line.

A steal and fastbreak layup by NeNe Nelson, who also had a big night for Enterprise with 16 points and six steals, plus a banked 3-point shot by Riley McCollough pushed the EHS lead to 24-13 with 4:28 left in the third.

Both teams struggled offensively in the next two minutes before Gosha scored down low to extend the lead to 13.

Dothan’s Amiyah Rollins scored on a putback to end a 9-0 Wildcat run, but Gosha answered with a putback.

Rollins added 1-of-2 free throws and Jadalie Medeiros scored on a layup at the end of the quarter, but Gosha scored off three free throws and a putback to give Enterprise a 33-18 lead going to the fourth quarter.

The Wildcats pushed the margin to 39-21 with 5:29 left but Dothan, behind Rollins and Alexis Hudgens, battled back and cut the deficit to six twice, the last at 44-38 with 34.7 seconds left following a Hudgens trey.

However on the ensuing play, a blocking foul on the sideline against Dothan was called an intentional foul – the fifth foul for Dothan’s Monica Morrison. Benjamin, as he talked with one official about the call, wasn’t aware it was her fifth foul, eliminating her from the game, and didn’t substitute in time, resulting in a technical foul.

During the same time, Enterprise coach was called for a technical foul for unsportsmanlike conduct and the foul plus the two technical fouls resulted in six foul shots – four for Enterprise and two for Dothan. Enterprise’s Nelson made 2-of-4, while Hudgens missed both for Dothan, leaving it 46-38 with 30.4 seconds left.

Dothan’s Hudgens’ missed on a 3-pointer on the next play, but Charisma Davis grabbed an offensive rebound and was fouled in going up for a shot. She made 1-of-2 free throws with 17.8 seconds left, cutting it to 46-39.

Nelson, though, put the final touches on it for the Wildcats, hitting two free throws with 3.4 seconds left.

Gosha and Nelson combined for 43 of Enterprise’s 48 points with McCollough scoring the other five.

The teams, who finished the first quarter tied at 2-2, combined on 52 turnovers in the game – 28 by Enterprise and 24 by Dothan.

If you love a cat who is cuddly and a little playful, then look no further, we have the pet for you!

Wildcats to compete in Elite 8 showdown

At the Feb. 8 meeting, the Coffee County Commission unanimously waived the rental fee on the Farm Center for Refuge Church in New Brockton as …

Head Coach George Scott and the team walk onto the court for the award presentation after defeating Dothan 48-39 in the Class 7A, Area 3 championship game. The girls will get to host a game in the Sweet 16 against Theodore sometime later this week.

Enterprise's Jadyn Williams matched up with Dothan's Jadalie Medeiros after securing a rebound in the first half of Friday night's game.