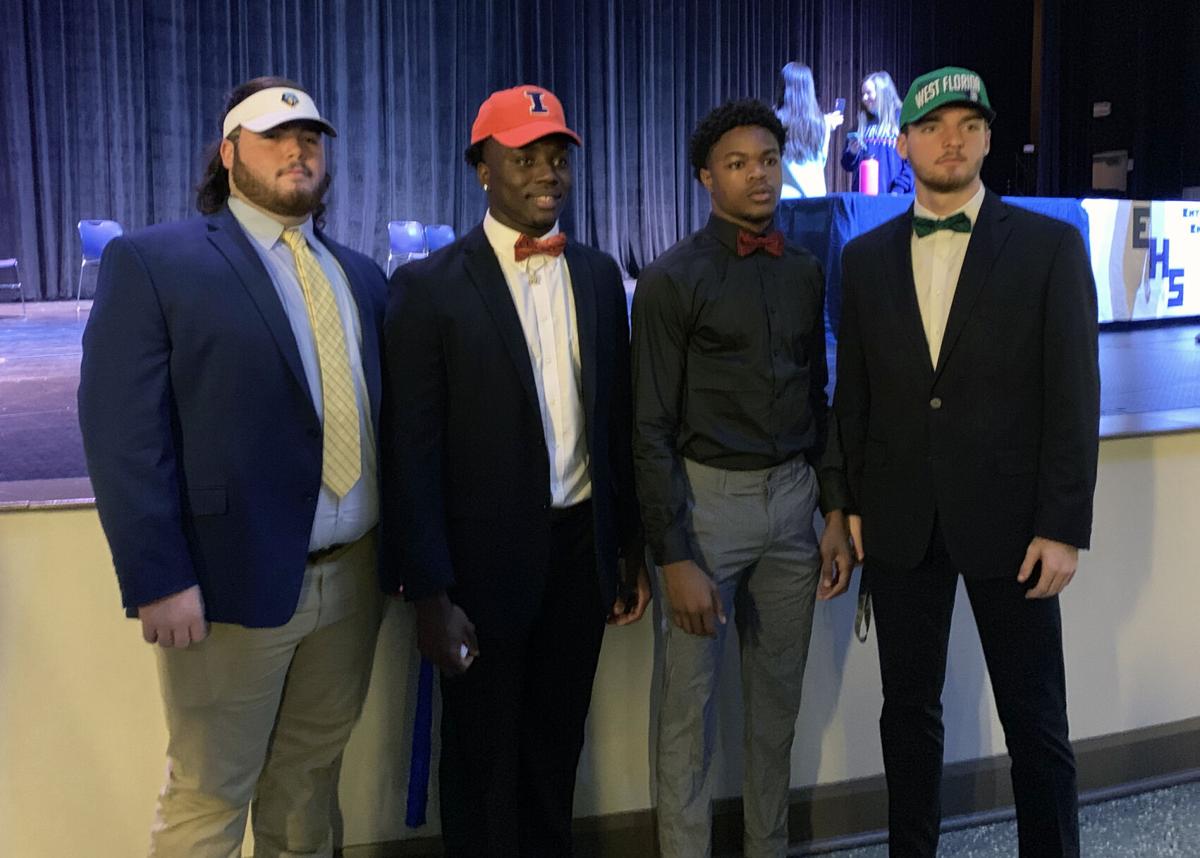 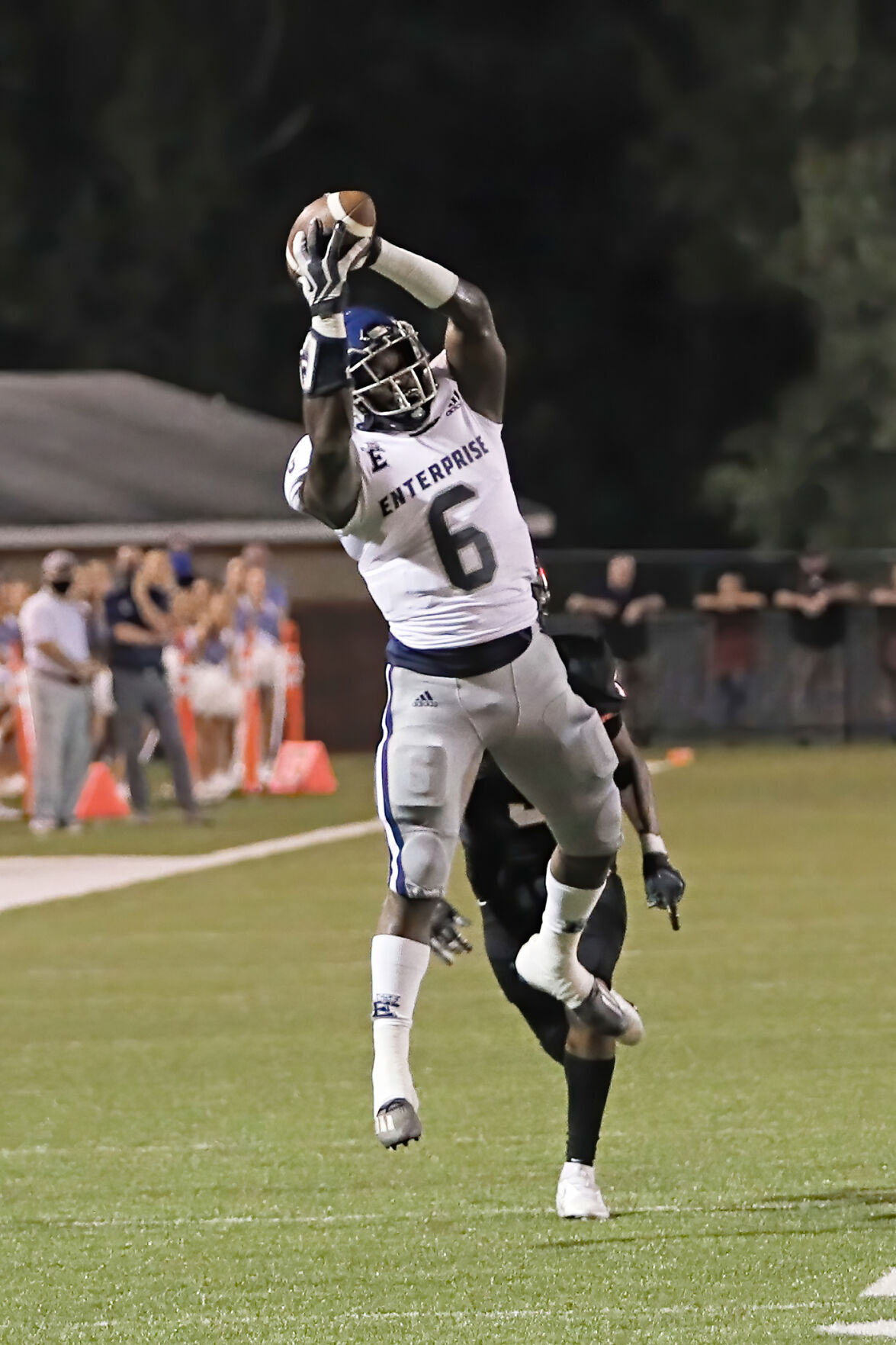 Josh McCray goes up to catch a pass in the game against Central-Phenix City. McCray scored all four touchdowns for the Wildcats that night: two receiving and two rushing. 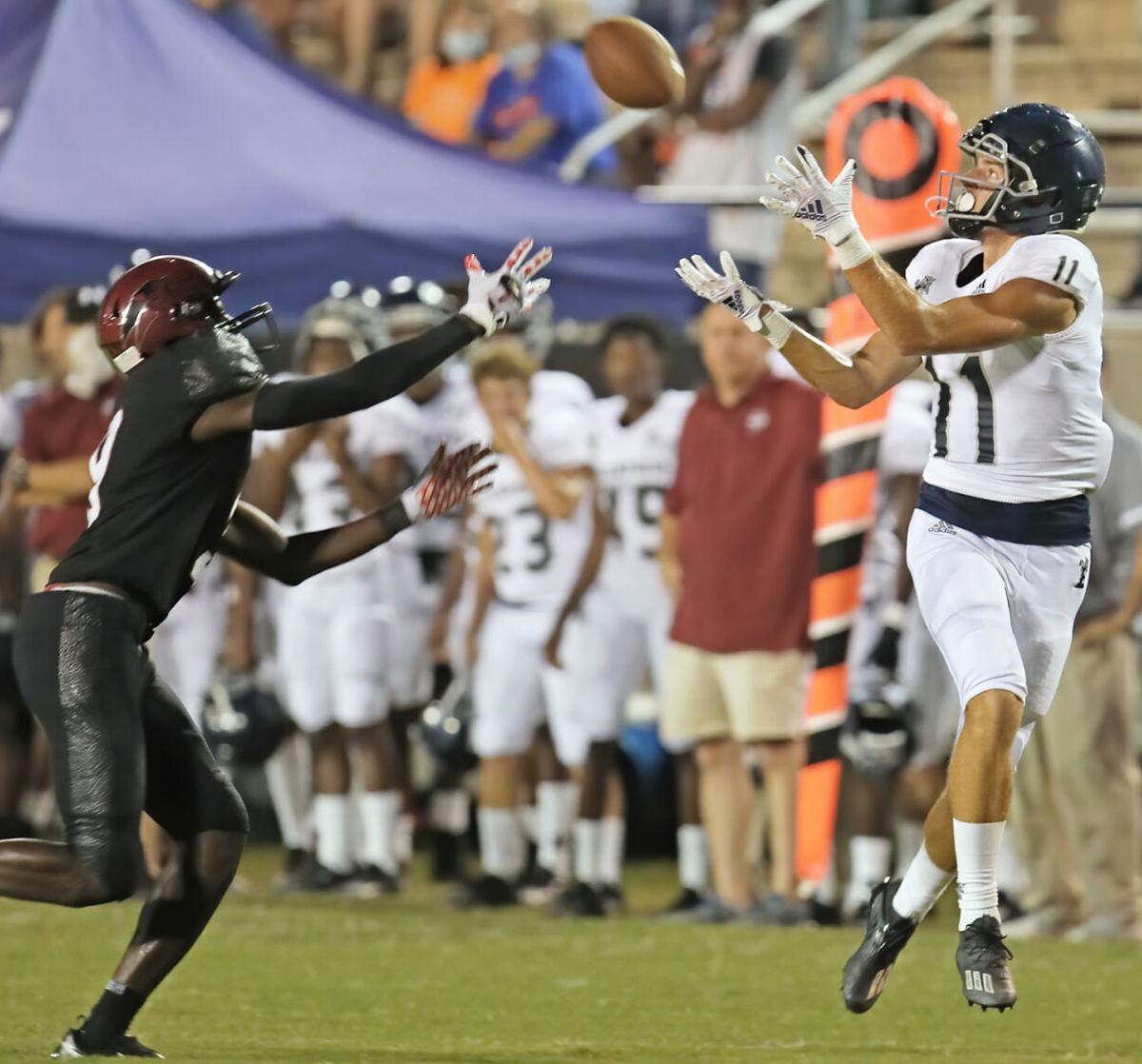 Jared Smith catches a pass from Quentin Hayes in the Wildcat's 42-13 victory over Dothan. 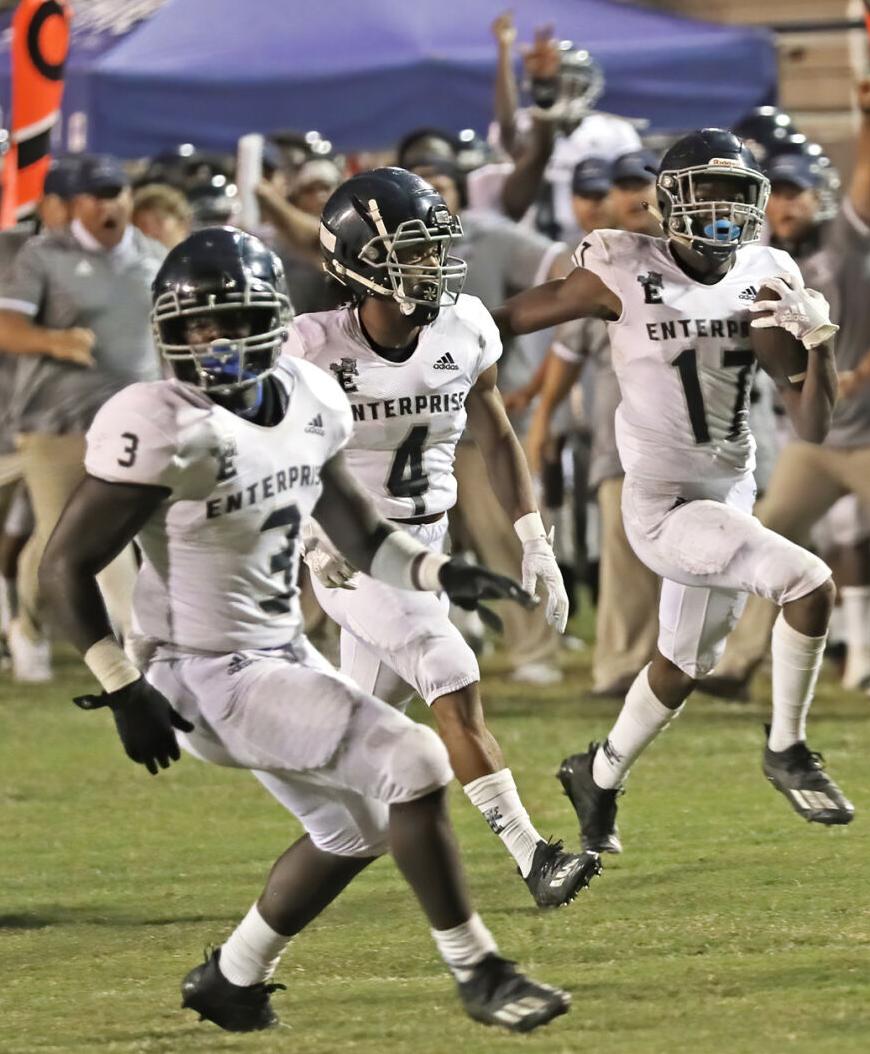 Jaylon Webster ran back a 52-yard interception for a touchdown in the game against Dothan. 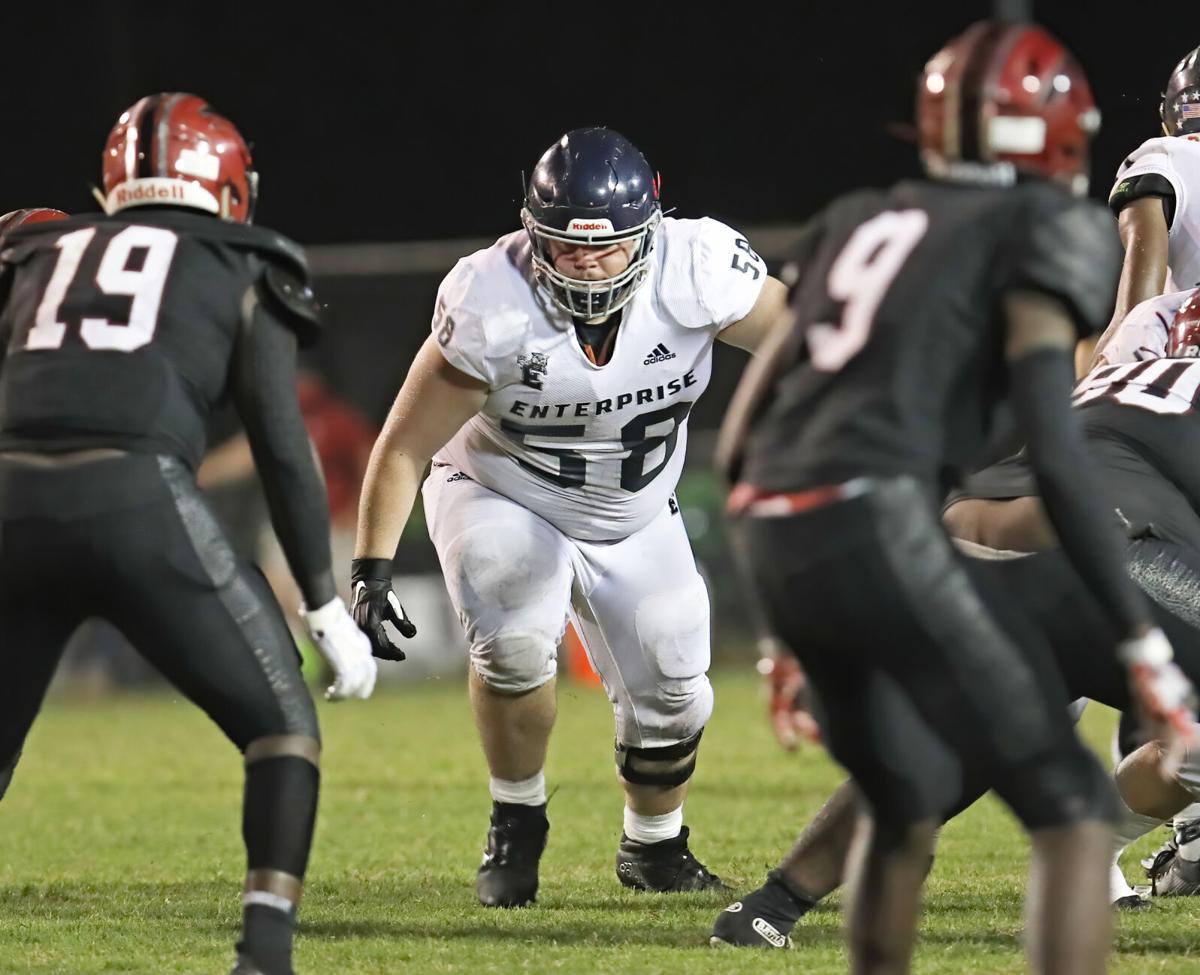 Carson Cole lines up against Dothan. The wildcats went on to win the game 42-13.

One described it as magical. Another called it an accomplishment.

Those were just part of the descriptions from four Enterprise senior football players Wednesday after signing college scholarships.

Smith is coming off an impressive performance in the Blue-Grey All-American Game on Jan. 25 at AT&T Stadium in Dallas, home of the Dallas Cowboys. The Wildcat senior caught seven passes for 227 yards, highlighted by four touchdown passes. He earned offensive MVP honors. The performance sparked some interest from other schools, but he stayed with West Florida, a program that had recruited him for a while.

Below are comments from the four after a ceremony Wednesday afternoon at the school’s Performance Arts Center plus comments from Wildcat head coach Rick Darlington.

On signing: It feels nice. There is so much going through my head. I am just excited.

On recruiting process/how he landed at Illinois: I was on Ole Miss and Kentucky kind of hard. I was pushing kind of towards Ole Miss, but they wanted me to play defense. Kentucky offered me to play running back, so I was kind of staying between those two.

Illinois then came in the mix and they said I could be a running back. That is what I want to be – an offensive player. I want the ball in my hands at all times. I feel like I can make some plays.

On goals for next year: My goal really is to get stronger in the weight room. I know I have to get big heading up there and taking all those big hits. I also have to build up my speed.

Darlington on McCray: Josh is maybe the most talented guy I have ever been around, but I tell you this, he is the most versatile player I’ve ever had. Josh could start on defense. He can throw it. He can run it. He can catch it and return kicks. He fills up those stat sheets.

On signing: It felt pretty magical. It is something you always dream of whenever you are a kid -- you are thinking about playing college football. Getting this opportunity is something great.

On Point University: I went on a visit and it just felt like family. They kind of embraced me and welcomed me. It felt like a really good fit. It is close to home so it will be good for my parents to come there and visit every so often.

Darlington on Cole: Carson is a very versatile player – he can play center, guard or tackle. He is our strongest player in the weight room -- he squats well over 500 pounds. He proved successful in the weight room and parlayed that into success on the field. He was a guy that was not a returning starter, but by the end of the season, he was starting games at all three positions on the line.

On signing: This is very exciting for me and my football friends. This is just a good accomplishment to feel. It has always been my dream to play college football. I thank coach (Pete) Shinnick and (receivers) coach (Alvance) Robinson for giving me a chance at West Florida to come down and play.

On recruiting process: It should be about a month now that they have been recruiting me, talking me very strongly. The only late school that came in (after the Blue-Grey game) was Mercer and they did a real good job. Coach (Drew) Cronic did a really good job at giving a last pitch, but I felt at home with West Florida, going down there and visiting.

On West Florida: The surrounding area is nice and coach Shinnick is a really good coach, a winning coach. Coach Robinson, the receivers coach, took me in on my visit and I decided, ‘This is a place I could see myself working out at, going to class’– it is just a great atmosphere.

On playing against teammate Webster in college: It will be cool. I was talking about that the other day with Jay Web and he was like, ‘That would be pretty cool. We will have to take a picture after the game.’ I was like, ‘For sure.’ It will be really nice to play against one of my former teammates.

On playing in Dallas: Playing in the Cowboys’ stadium was amazing. The stadium is huge and it was echoing and it was loud. It is really cool.

Darlington on Smith: He was the one guy that I was really worried about falling through at a level way below he could play at (because of COVID-19 domino affect with scholarships). I don’t think people realize how talented he is, and specifically how fast he is – he is a blazing 4.4 guy laser time, 23 ½ miles per hour. When he gets down there to West Florida, he will stand out and show people, ‘That guy is a sleeper.’ He wasn’t a sleeper to us. We knew what he had.

On signing with West Alabama: It is a good family environment. I love the coaches. It is not all about football. They focus on other stuff, like education, family, brotherhood.

On visit to West Alabama: When I went on the visit, that is what they talked about – Malcolm Butler, Tyreek Hill, all of them made it to the pros -- so I know there is a (direct) way (to the pros).

On facing teammate Smith in college: It will be something to watch. The (Enterprise) coaches have already been talking about coming to that game. I am ready for it. Jared and I have been battling in practice throughout the years, but we have never had that feeling of being a game (against each other).

Darlington on Webster: Jaylon, No. 17 (on the field), is a versatile guy who can play corner and play safety. He is very fast, a tremendous track athlete. Webbie is a good pass rusher and smart for a defensive back.

After leaving the only home she ever knew for the big city life in New York, Brithany Dookie is living out her own American Dream and making h…

COVID-19 cases and hospitalizations are continuing to drop in Coffee County and statewide, according to Coffee County Emergency Management Dir…

Josh McCray goes up to catch a pass in the game against Central-Phenix City. McCray scored all four touchdowns for the Wildcats that night: two receiving and two rushing.

Jared Smith catches a pass from Quentin Hayes in the Wildcat's 42-13 victory over Dothan.

Jaylon Webster ran back a 52-yard interception for a touchdown in the game against Dothan.

Carson Cole lines up against Dothan. The wildcats went on to win the game 42-13.