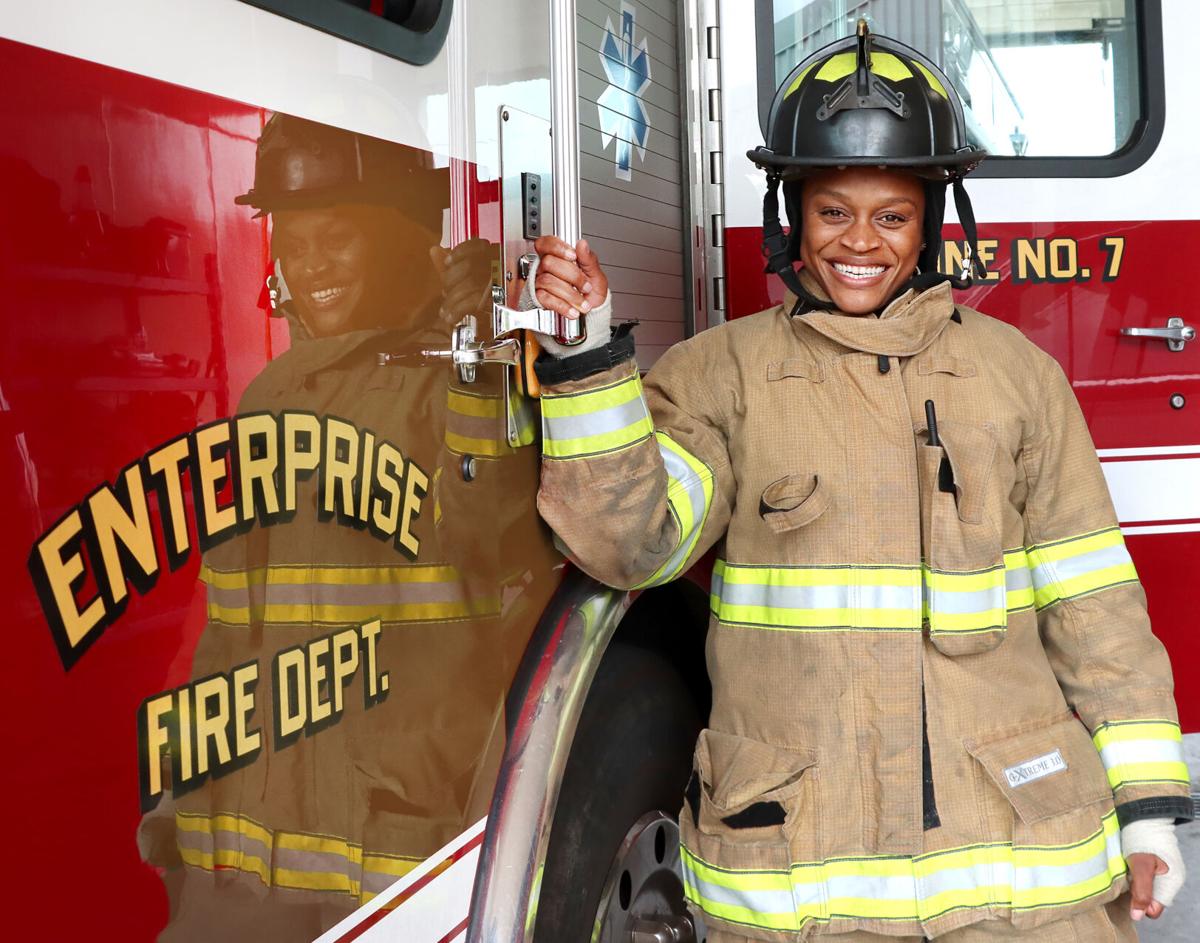 Brithany Dookie grew up in the country of Trinidad and Tobago, but always longed to be a firefighter. Ten years after moving to America, she realized her dream and made local history as both the first woman and minority woman to serve as a firefighter with the Enterprise Fire Department. 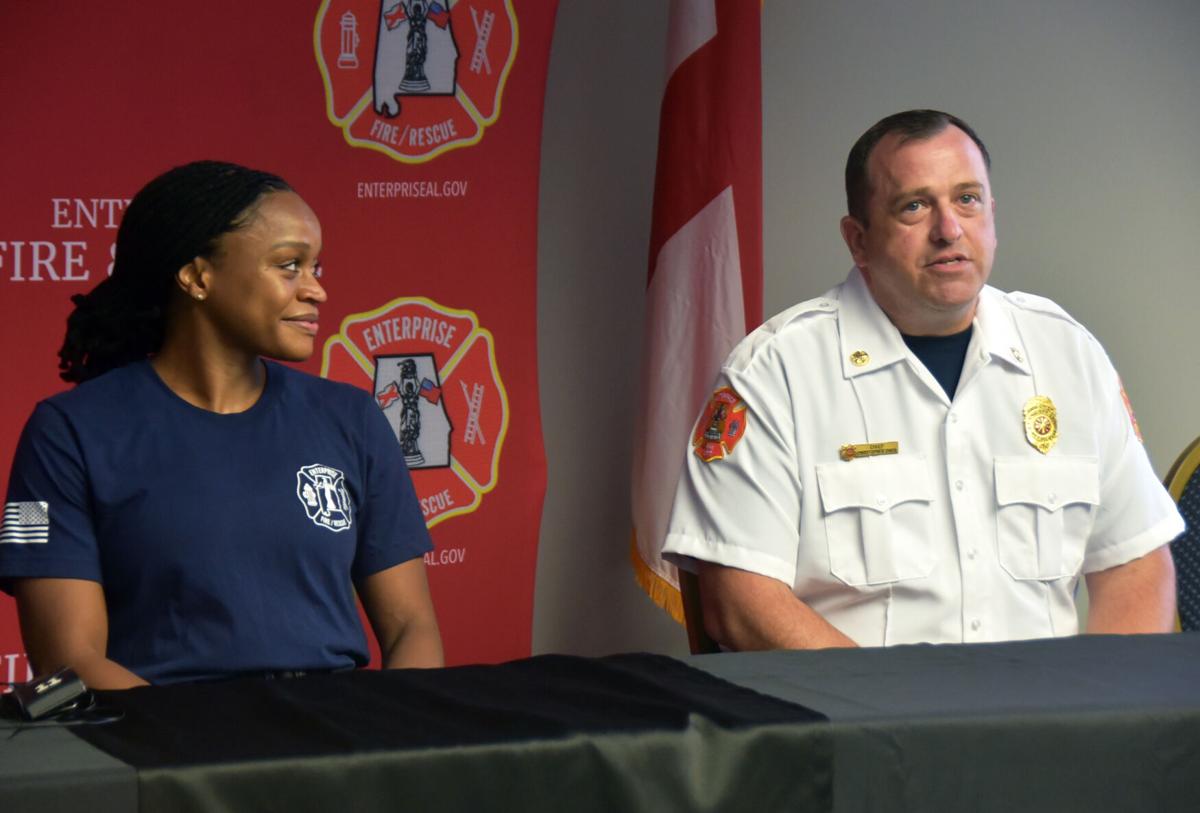 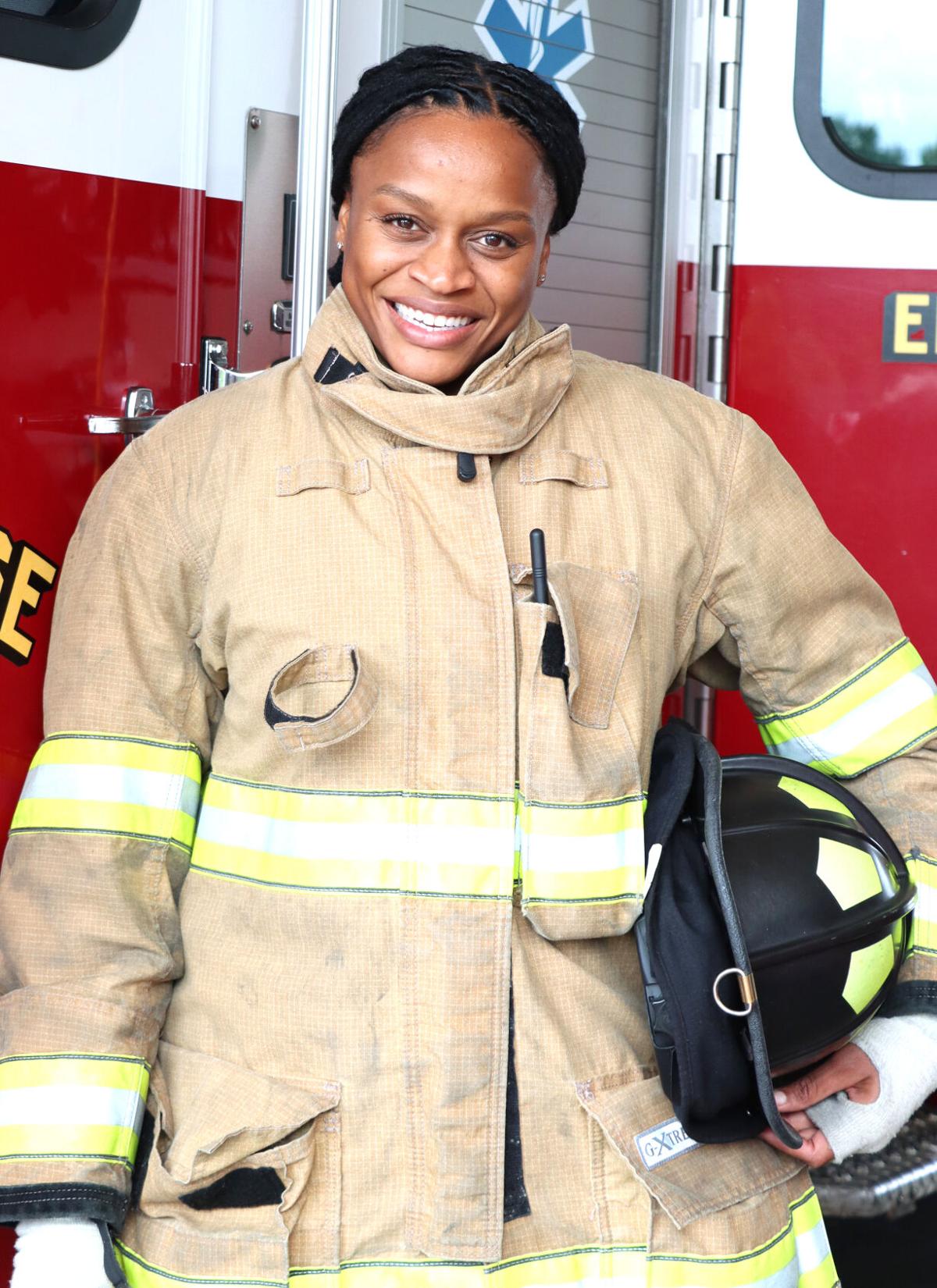 Brithany Dookie is currently assigned to Central Fire Station, and her job on the crew is operating the fire hydrants. Her goal is to one day be fire chief, but Chief Chris Davis said he doesn’t want her “stuck behind a desk” too soon.

After leaving the only home she ever knew for the big city life in New York, Brithany Dookie is living out her own American Dream and making history in Enterprise as the first ever female firefighter to serve with the Enterprise Fire Department.

Born and raised in the tropical country of Trinidad and Tobago, Dookie said she’s always longed for more and eventually decided to make the move to New York after her mom passed to be closer to her dad.

“You don’t see a lot of people like me from my island, doing all this. The American Dream is real for us, so being here is such an honor,” she said. “I loved growing up on the islands, but after a while, you get tired of vacations. I wanted more.”

Dookie earned a degree in business from the University of the West Indies and established a successful career as a bookkeeper and accountant in New York, but she always had her true dream in the back of her mind—becoming a firefighter. Eventually, the itch became too much to ignore.

“Money is not everything. I wanted to do what I was meant to do, what makes me happy,” she said. “I decided I was gonna make my move and get started on my career in the fire service.”

She explored the options in the city, but after visiting family at Fort Rucker, she decided to make the Wiregrass home and leave behind the hustle and bustle—and the cold—in favor of the Southern charm she’d always heard about. She’s now lived in the area for a little over a year.

Dookie earned her certification at the Alabama Fire Training Center and was first hired by the Ozark Fire Department before interviewing with the Enterprise squad and Fire Chief Chris Davis, who said he knew within the first few minutes of the interview that he wanted to hire her.

“This is a first and I know that it is important, but I think the most important thing about Brithany isn’t that she’s the first female firefighter in Enterprise, it’s the fact that she has such a servant’s heart and is genuinely a good person,” Davis said. “It did not take long into the interview to realize that she probably used the word service 20 times, and I was sold. I continued the interview, but she was hired at that point.”

Dookie said her personal philosophy about service is, “If you’re not living a life of service, you need to reevaluate.”

“People think it’s corny, but it’s something I always think about,” she said. “I know if I can help people, I can make a difference in someone’s life.”

Although she’s now a citizen of the United States of America, her island continues to hold a special place in her heart, and she wants to serve as an example of what can be accomplished.

“I want the people of my country to be proud of me and have little girls look up to me and know that they can do this,” she said. “My journey here has been a long one, and I’m just grateful to be here. Everyone here has treated me so good, and I’m just trying to soak up all the knowledge because I want to be great at this job.”

Davis said she’s fit in well with the crew and expects her to have a big impact on the department’s future successes and overall effectiveness.

“Some of the remarks I got in communicating with people from her rookie school were that she was the first to show up, the last to leave and dedicated to knowledge, and that made hiring her even easier,” he said. “She’s fitting in well, and she’s going to be an excellent part of the team. Her confidence, interest, leadership and education are phenomenal, and we’re just happy to have her.”

Dookie, who is currently assigned to Central Fire Station, also received a warm welcome from Enterprise Mayor William Cooper at the press conference held to mark the significance of the occasion.

“This is a historic day in the City of Enterprise knowing that she is the first female firefighter to join this illustrious group of men who have been wonderful as far as taking care of our citizens, having some of the best equipment, having some of the nicest fire stations around and having a staff of men, and now women, that are dedicated to what needs to be done,” he said. “We welcome Brithany aboard, and we know that she’s going to do a fine job and that this is going to open the doors to others. We have made the mark.

“We thank Brithany for thinking about us and Chief Chris Davis for interviewing her and giving her the opportunity to serve.”

Brithany Dookie grew up in the country of Trinidad and Tobago, but always longed to be a firefighter. Ten years after moving to America, she realized her dream and made local history as both the first woman and minority woman to serve as a firefighter with the Enterprise Fire Department.

Brithany Dookie is currently assigned to Central Fire Station, and her job on the crew is operating the fire hydrants. Her goal is to one day be fire chief, but Chief Chris Davis said he doesn’t want her “stuck behind a desk” too soon.