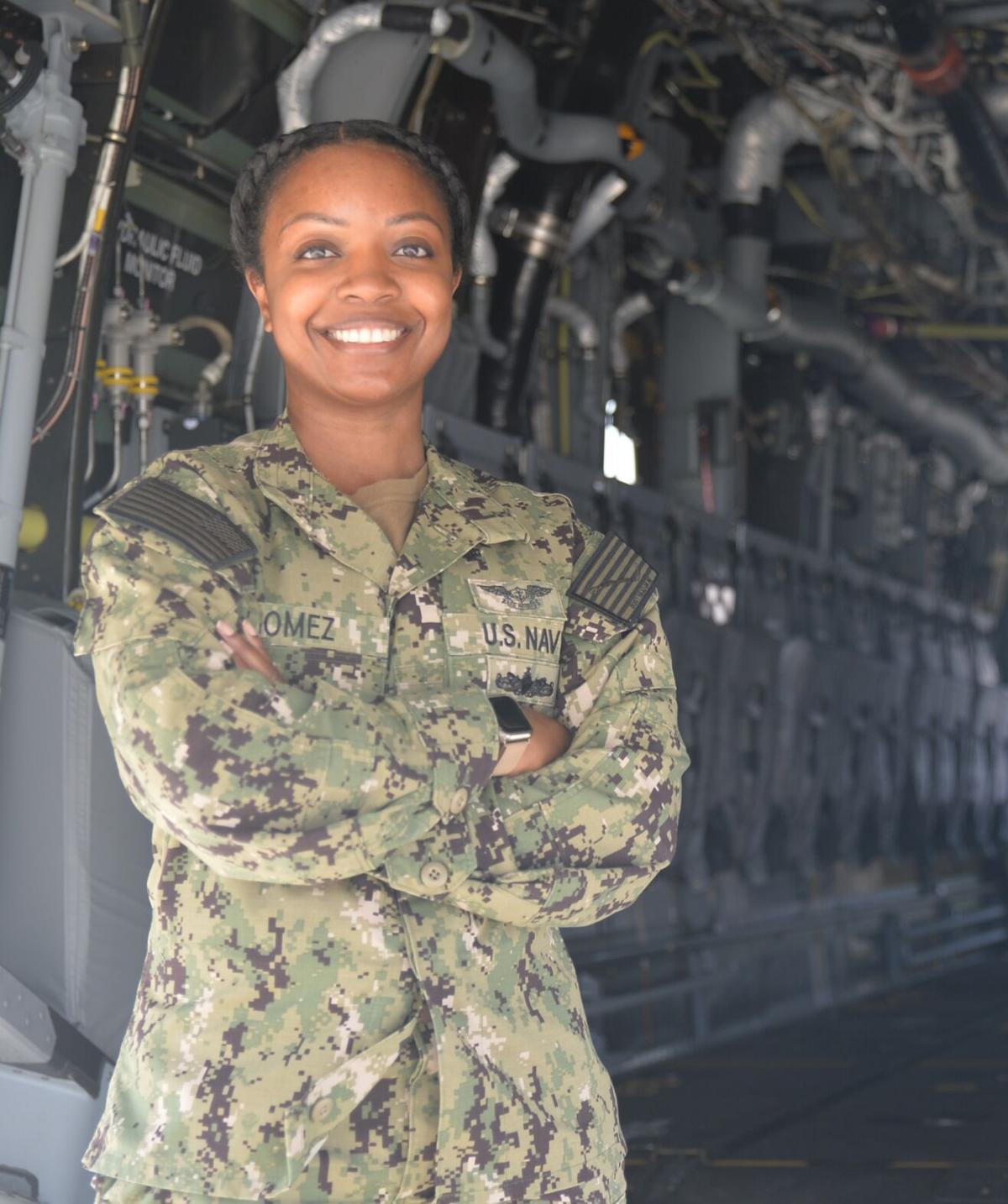 Enterprise native Marnicca Gomez has served in the Navy for 17 years and now supports missions flown by the Navy’s newest long-range, medium-lift aircraft: the CMV-22B Osprey. 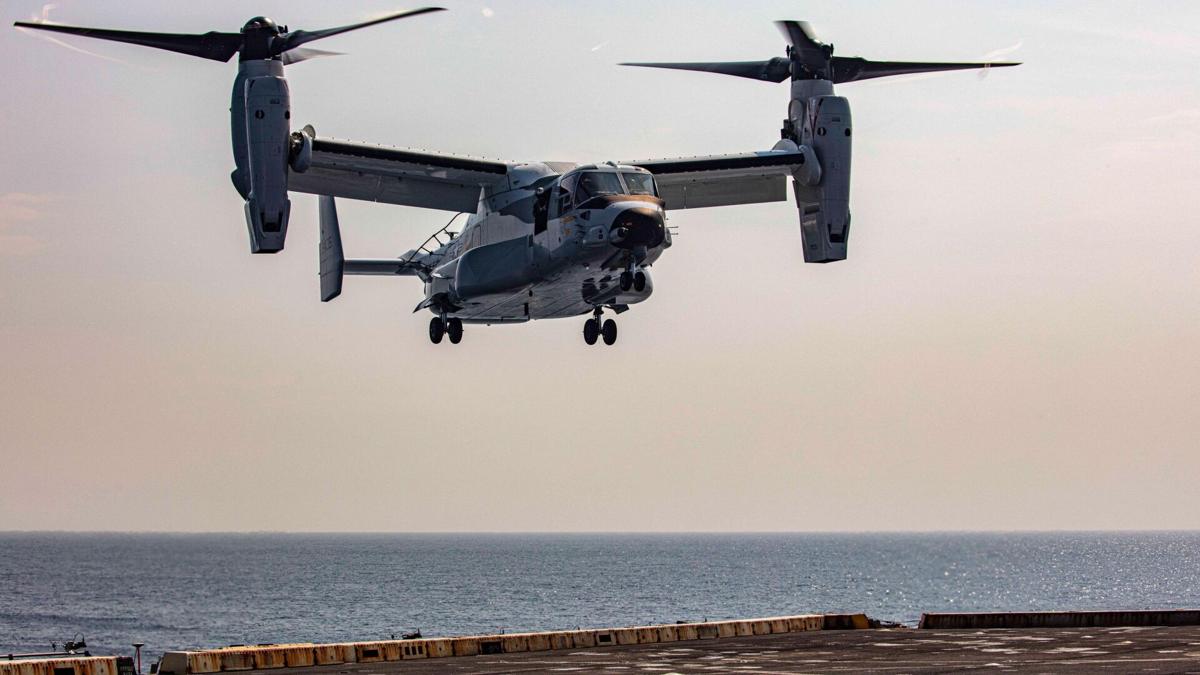 An CMV-22B Osprey, attached to the Blackjacks of Air Test and Evaluation Squadron Two One (HX-21), lands on the flight deck aboard the amphibious transport dock ship USS New York (LPD 21), July 18, 2020.

“I joined the Navy because of my dad,” said Gomez. “He served in the Army and currently works for them as a civilian. My older sister is also serving in the Army. The Navy recruiters came through my high school and they told me I would be able to have a job similar to my dad who was a radar technician in the Army. I was excited to have the chance to follow in his footsteps, while making my own path by joining the Navy.”

Growing up in Enterprise, Gomez attended Enterprise High School and graduated in 2004. Today, Gomez uses the same skills and values learned in Enterprise to succeed in the military.

“Growing up, I was in Junior Reserve Officer Training Corps (JROTC),” said Gomez. “Seeing the discipline instilled in my instructors and the pride they felt for their work made me want to join the Navy. I also grew up in a military town, so I had grown up with discipline and surrounded by diversity, which are both things you get in the Navy.”

These lessons continue to help Gomez while serving in the Navy.

The CMV-22B is the Navy’s version of the U.S. Marines’ V-22 Osprey and is designed to replace the C-2A Greyhound, which has provided logistical support to aircraft carriers for four decades.

According to Navy officials, the mission of the CMV-22B is to provide timely, persistent air logistics for sustained carrier strike group lethality, anywhere in the world.

“The men and women of VRM 30 deliver lethality and combat effectiveness to the Carrier Strike Group,” said Cmdr. Steve Parente, VRM 30’s commanding officer. “Through the sustainment of high priority logistics and critical personnel, our worldwide deployable CMV-22 Detachments directly enable the combat power of the world’s most powerful Navy anytime, anywhere. The Titans are extremely proud of their significant responsibility and steadfast service in the defense of our great nation.”

Serving in the Navy means Gomez is part of a team that is taking on new importance in America’s focus, rebuilding military readiness, strengthening alliances and reforming business practices in support of the National Defense Strategy.

“The Navy contributes to national security tremendously,” said Gomez. “Our presence alone is a big factor. We travel the seas and visit ports around the world, which allows other nations to see that we are the biggest Navy in the world and we are everywhere.”

With more than 90 percent of all trade traveling by sea, and 95 percent of the world’s international phone and internet traffic carried through fiber optic cables lying on the ocean floor, Navy officials continue to emphasize that the prosperity and security of the United States is directly linked to a strong and ready Navy.

According to Chief of Naval Operations Adm. Mike Gilday, four priorities will focus efforts on sailors, readiness, capabilities, and capacity.

“For 245 years, in both calm and rough waters, our Navy has stood the watch to protect the homeland, preserve freedom of the seas, and defend our way of life,” said Gilday. “The decisions and investments we make this decade will set the maritime balance of power for the rest of this century. We can accept nothing less than success.”

Gomez and the sailors they serve with have many opportunities to achieve accomplishments during their military service.

“My proudest naval accomplishment is seeing junior personnel that I’ve worked with grow up,” said Gomez. “It’s wonderful seeing them take the knowledge I’ve instilled in them and become the sailors they are today. Seeing the impact I’ve had on others and seeing their successes has been huge for me. I’m also very proud to have been a chief when I was previously enlisted.

“As an enlisted sailor I had always looked up to the chiefs, and so having the chance to be a chief myself was very important to me. Then, I got to commission as an officer, which is a whole other achievement.”

As Gomez and other sailors continue to train and perform the missions they are tasked with, they take pride in serving their country in the United States Navy.

“Serving in the Navy means being a part of something bigger than myself,” added Gomez. “You never know who you’re going to impact or how you’re going to inspire others until you serve. As an officer, I have to put my best foot forward every single day to push my junior sailors to improve. I also have the chance to set an example for young girls and boys who might not know what they want to be when they grow up. I get to show them that they can also be a part of something as awesome as serving the country.”

After leaving the only home she ever knew for the big city life in New York, Brithany Dookie is living out her own American Dream and making h…

Scammers are at it again, calling Alabama Power customers and falsely demanding immediate payment of an overdue electric bill and threatening …

Enterprise native Marnicca Gomez has served in the Navy for 17 years and now supports missions flown by the Navy’s newest long-range, medium-lift aircraft: the CMV-22B Osprey.

An CMV-22B Osprey, attached to the Blackjacks of Air Test and Evaluation Squadron Two One (HX-21), lands on the flight deck aboard the amphibious transport dock ship USS New York (LPD 21), July 18, 2020.