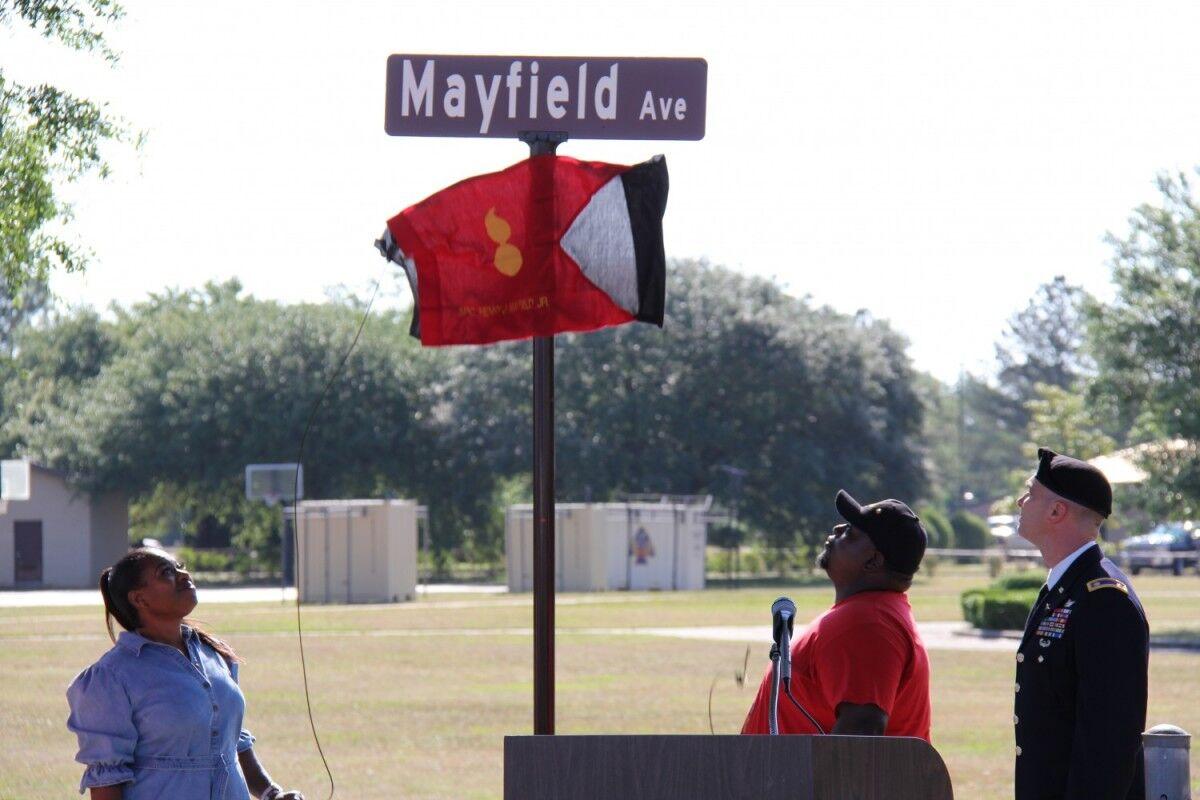 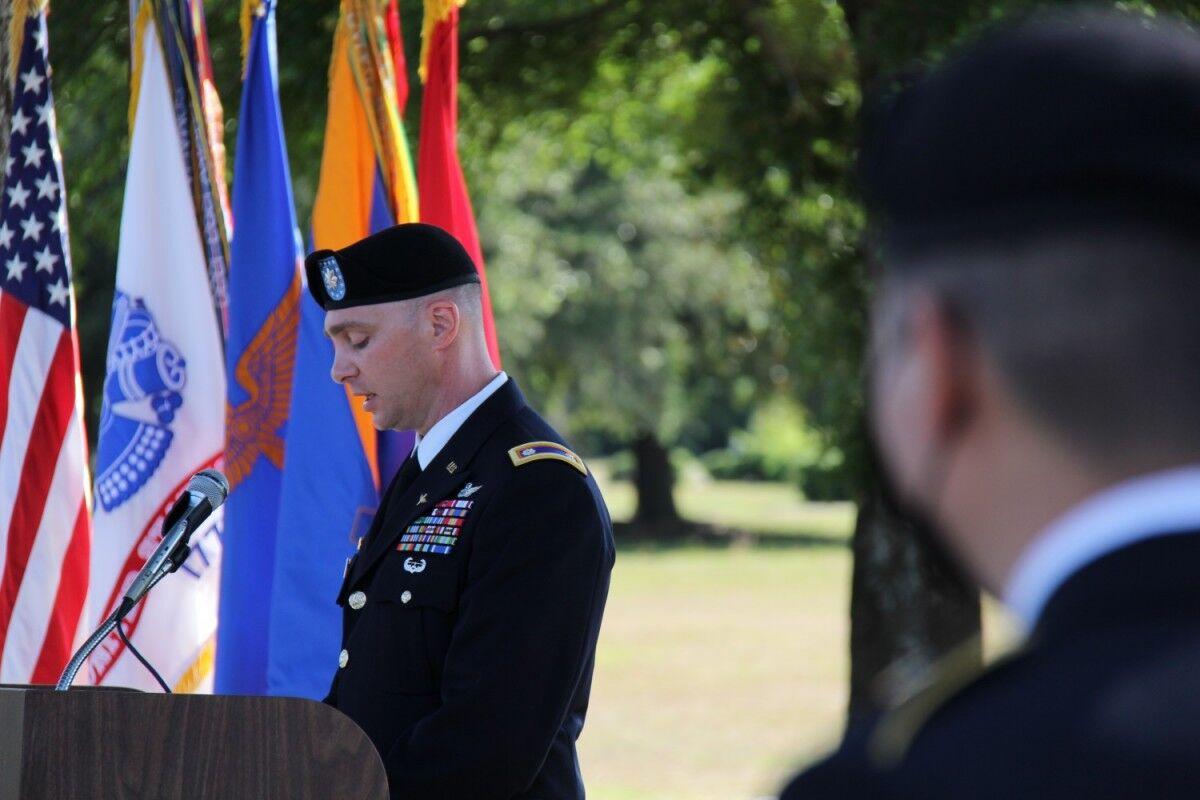 The Mayfield family at the ceremony. 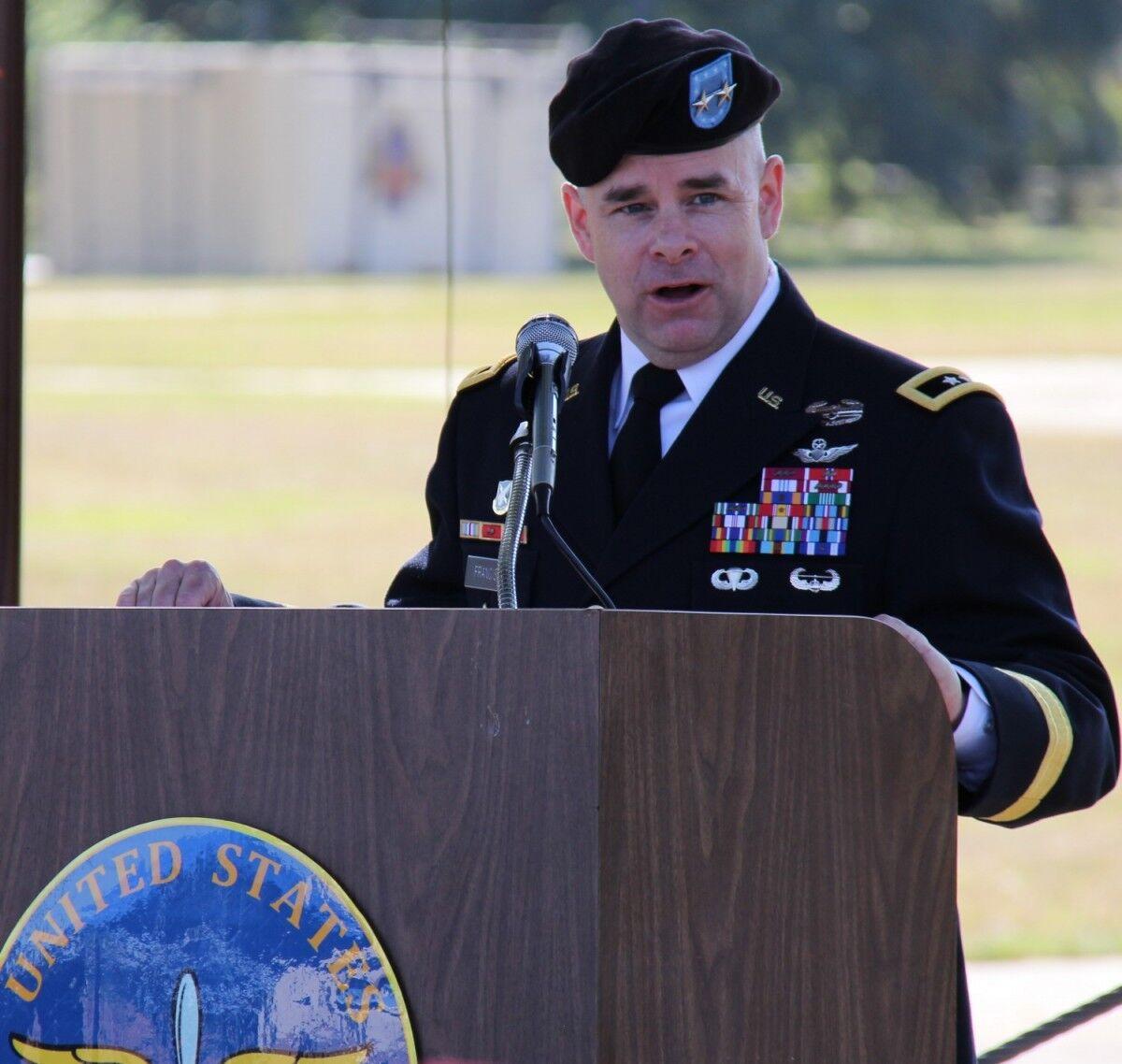 FORT RUCKER, Ala. — Fort Rucker honored the life and sacrifice of one of its own when the post renamed Third Avenue to Mayfield Avenue during a May 26 ceremony.

The street was named in honor of Spc. Henry Jarrett Mayfield Jr., a 1st Battalion, 58th Aviation Regiment Soldier killed in action in Kenya Jan. 5, 2020, and Mayfield’s parents performed the unveiling at the conclusion of the ceremony outside the unit’s motor pool.

“It’s clear that Mitch comes from an amazing and supportive, big family – four brothers, four sisters, loving parents, grandparents, and many aunts and uncles. I’m certain that his patriotism, dedication, ambition and Soldier qualities are all a direct result of a loving family devoted to raising him, guiding him and shaping him into the wonderful young man that joined the Army and became a Soldier,” Francis said of the man known to his family as Mitch.

“Mitch was also a member of an Army family, serving with a unit and a team that valued the opportunity of serving with him – many of whom are present in this formation today,” Francis continued. “Some of the most remarkable, bravest and influential Soldiers from Army Aviation are found on our street signs. These are names our community knows well – Novosel, Molinelli, Ruf and Crandall. We honor these Soldiers with these street names because, like Mitch, they made a difference to the Army and to those they served with every day.

“These street names serve as part of a lasting legacy to our local heroes and a reminder for us all to remember their names and sacrifice to their nation,” he added. “We want to honor and appreciate Mitch’s service and sacrifice indefinitely as his name joins these legendary leaders and Soldiers.”

Mayfield’s commitment to the mission, the Army and his fellow Soldiers was clearly very strong, Francis said. “He made his unit better, the people around him better, and made a difference for the Army serving his country and devoting himself to something bigger than himself. Naming this street after him is a small token of our enduring gratitude for his faithful service to the U.S. Army and to our nation.”

The general also had a message for Mayfield’s family. “We will never forget you.”

Mayfield’s former commander, Lt. Col. Keith A. Haskin, said he knew the specialist was someone special soon after their first meeting.

“I was immediately impressed with his intellect and his work ethic,” Haskins said. “As we prepared for the deployment to the Horn of Africa, he was identified as a Soldier who could not only perform his assigned MOS (military occupational specialty), but one who could also assist in the air traffic control mission of the battalion.

“During the mission readiness exercise in July 2019, Henry began his cross-training to be certified as a landing zone safety officer and performed the same functions as our air traffic controllers,” the commander said, adding that the Air Force, that runs the LZSO program, usually requires a seasoned air traffic controller of at least the E-6 rank to perform those duties. “I remember receiving pushback from many Air Force personnel, saying the mission was too complex for someone that was not a seasoned controller. But I knew better. I knew Henry would not only perform brilliantly, but I also knew he would do whatever is necessary to accomplish the mission and support his fellow Soldiers. And that is what he did, day in and day out.”

He added that Soldiers could still share many tales of Mayfield and his outgoing personality. “But the one common thread in all of them is how Henry was a true team player and a friend that everyone looked to when they needed a boost.’

For his actions in Kenya, Mayfield was awarded the Combat Action Badge, the Bronze Star and the Purple Heart.

“He was a dear friend to the unit and to his family,” Haskin added. “This avenue, named in his memory, will honor the life and sacrifice of Spc. Henry ‘Mitch’ Mayfield. Soldiers and civilians alike following in his footsteps will be reminded of him as they drive on Mayfield Avenue, or walk each day from the barracks behind me. Just like Henry will always be remembered by all within the unit, so too will his name and memory be honored by all those who eat in the (dining facility) at Baledogle Airfield, Somalia; relax in the (morale, welfare and recreation) facility in Manda Bay, Kenya; conduct airborne operations into a critical drop zone in Kenya; or drive down this road – all four locations now permanently bear his name.

Above and beyond the honoring of the memory and sacrifice of Mayfield, Haskin said people should think about two things when traveling down the newly named avenue.

“Live every day to the fullest – take advantage of every day you have on Earth, because you don’t know when it will be your last,” he said. “And always train hard. He was probably one of the hardest workers we had in the battalion. What he did every day to train, and get ready and get mission focused is a lesson for everyone who is in the Army and really just life in general.”

The Enterprise City Council passed an ordinance establishing an entertainment district in the city’s downtown area at its Tuesday evening meeting.

AUBURN UNIVERSITY, Ala.—Hummingbirds are a beautiful and exciting part of Alabama summers. Hummingbird feeder etiquette is not widely known, b…

The Mayfield family at the ceremony.