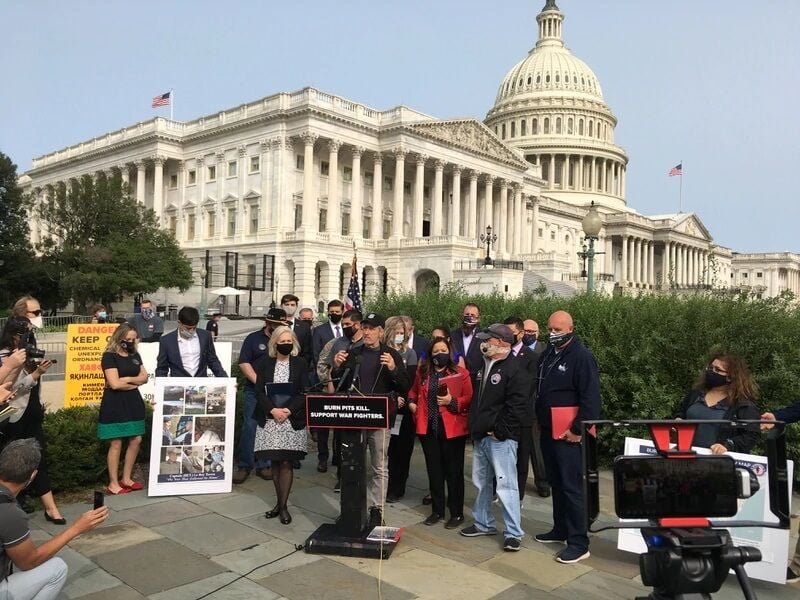 Comedian Jon Stewart (center) speaks to a crowd of reporters and advocates about benefits for veterans who suffer from illnesses related to exposure to war zone burn pits during a Capitol Hill rally on Sept. 15, 2020. 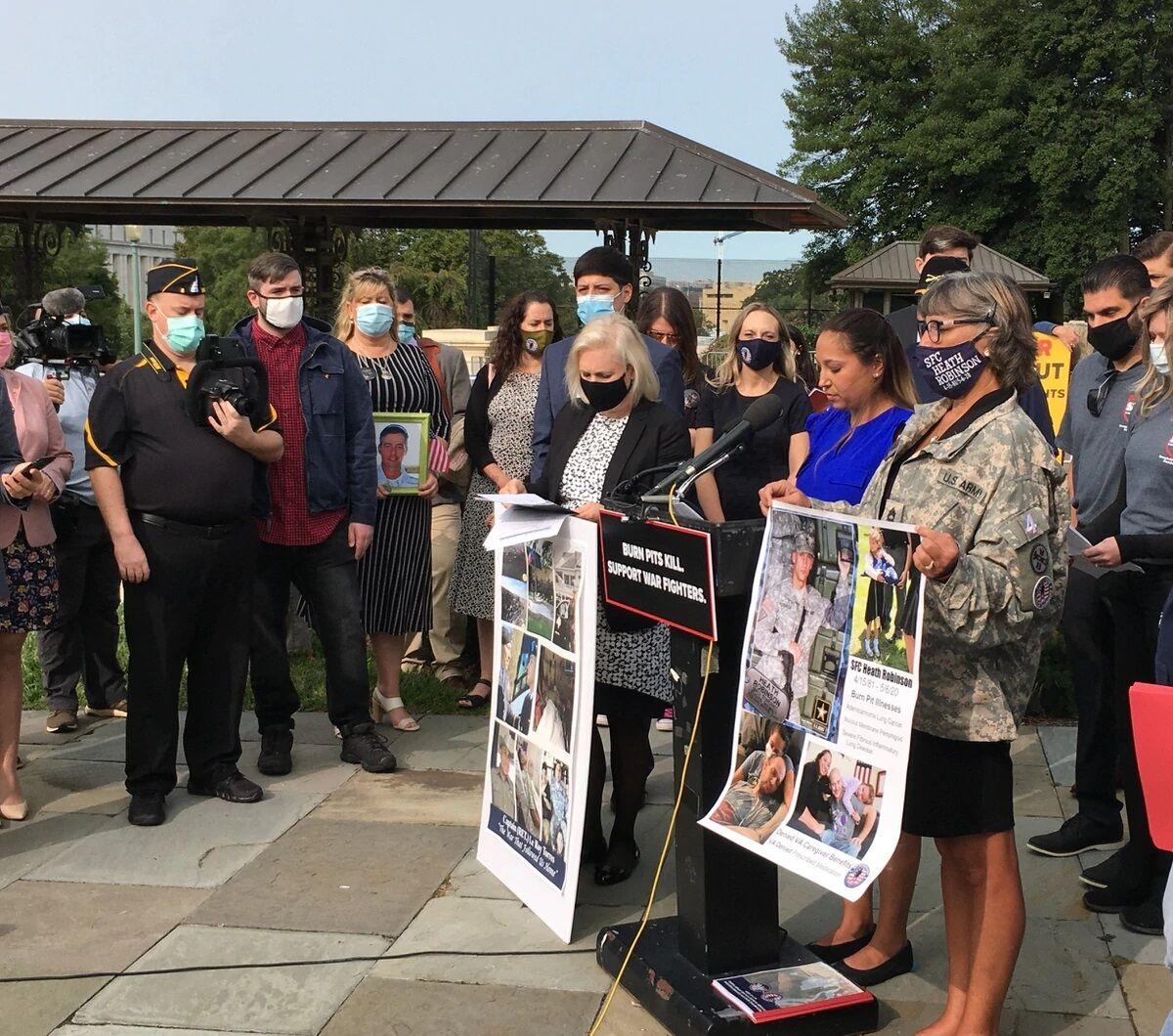 Veterans advocates on Tuesday launched a new campaign for additional recognition and aid for troops exposed to toxic burn pit fumes during overseas deployments at the height of the Iraq and Afghanistan wars, saying time is running out to provide real help to the victims.

“This is not about science, this is about money,” said comedian Jon Stewart in an emotional press conference on Capitol Hill featuring numerous families of dead and dying veterans whose rare illnesses aren’t officially recognized by federal officials as stemming from burn pit exposure.

“Listen to these families … Delaying care and waiting for veterans to die is not a mantle worthy of our country.”

Tuesday’s event coincided with new legislation introduced by Sen. Kirsten Gillibrand, D-N.Y., and Rep. Raul Ruiz, D-Calif., which would provide presumptive benefit status for any veterans who served in Iraq and Afghanistan during the wars, as well as a host of other overseas military sites where burn pits were frequently used.

Advocates for years have criticized the Department of Veterans Affairs for insisting that individuals prove a direct connection between the toxic fumes they breathed during deployments and rare cancers and respiratory illnesses, even though the Defense Department acknowledges little tracking was done over the years to provide a true accounting of the poisons in the air.

“Service members are returning from the battlefield only to become delayed casualties of war,” Ruiz said. “This is the Agent Orange of this generation … We need to be taking care of our veterans and saving lives.”

As many as 3.5 million veterans could be eligible for the benefits under the legislation, if they showed signs of serious, uncommon illnesses believed to be the result of toxic fumes.

The legislation echoes previous measures passed by Congress related to compensation for emergency services personnel who worked in New York following the Sept. 11 al-Qaida attacks. Stewart was a key advocate in that legislative fight, and said he hopes to bring the same attention and resources to the burn pits issue.

“Today, we plant a flag on this,” he said. “I can’t imagine anybody wouldn’t be on board with this cause.”

But fears over the costs of such benefits extensions have sidelined similar past efforts. Rosie Torres, executive director of Burn Pits 360, said after more than a decade of advocacy work on Capitol Hill, only a few significant measures have passed into law, and even those with significant flaws.

VA’s burn pit registry, for example, contains the names of more than 200,000 individuals who claim serious health problems related to the open-air waste pits, but Torres said a tiny fraction of those have received any compensation for the injuries.

Former VA Secretary David Shulkin noted that a study last week from the National Academies of Sciences, Engineering and Medicine found widespread problems with how scientific data is collected and analyzed regarding the burn pits, an analysis he said undermines VA’s strict requirement for scientific links before benefits can be awarded.

“What do you do when you have vets suffering?” he said. “Right now, we’re making our vets wait without getting help. That’s just wrong ... We have to change our system.”

Stewart, advocates from the 9/11 responders fight and veterans families vowed to do that. The legislation faces long odds of becoming law in this year’s shortened fall congressional legislative session, but coalition members vowed to return over and over again until the issue is resolved.

Danielle Robinson — wife of Sgt. 1st Class Heath Robinson, who died in April after a lengthy battle from respiratory illnesses he believed was related to his burn pit exposure — praised the effort but also acknowledged the latest campaign brings with it some personal bitterness.

“My husband is dead because America poisoned its soldiers,” she said. “It’s a national disgrace that our war heroes need celebrities to speak out on their behalf to get this addressed.”

DALEVILLE - This Dale County building will soon be home to one of Amazon’s newest Last Mile facilities supporting its distribution network.

The City of Daleville will soon be home to one of Amazon’s newest Last Mile facilities supporting its distribution network.

Believe it: Band is missed during road games

Your scribe couldn’t be paid enough to be in this year’s Enterprise High School Wildcat Marching Band!

Hurricane Sally took the slow route, dumping rain on Coffee County and knocking down trees and power lines on a washout Wednesday.

A former Coffee County employee filed a lawsuit Tuesday against the Coffee County Commission, alleging he was subject to religious discriminat…

The following people were booked into the Coffee County Jail between September 6 and September 12. The information is in the following format:…

Pentagon war planners can envision a conflict with China starting in any number of ways.

The Enterprise City Council unanimously approved a permit request that will allow a fall festival Oct. 27-Oct. 31 behind the old Ryan’s restau…

Comedian Jon Stewart (center) speaks to a crowd of reporters and advocates about benefits for veterans who suffer from illnesses related to exposure to war zone burn pits during a Capitol Hill rally on Sept. 15, 2020.