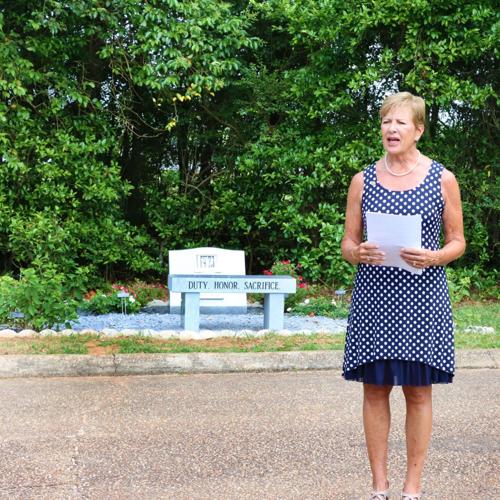 Kathy Brown in front of the Never Forget Garden at the dedication ceremony. 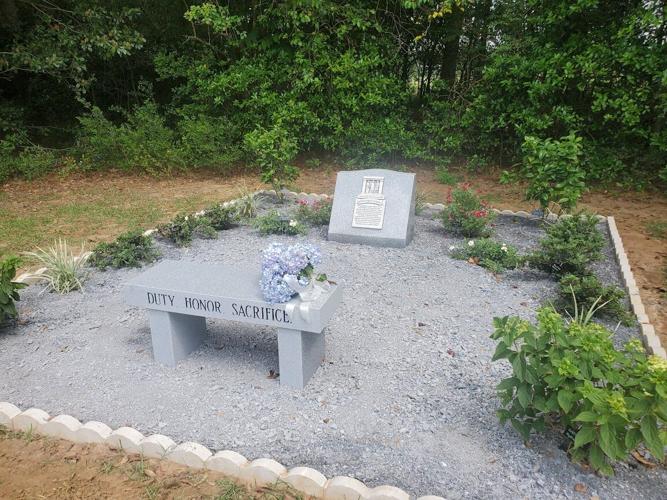 A Never Forget Garden with the mission to honor veterans and their families was recently dedicated at Meadowlawn Cemetery.

Brown worked with the Enterprise Flower Lovers Garden Club to make her vision for the garden a reality. The garden includes 21 different plants, symbolizing the 21-gun salute, the military’s highest honor.

“How many of you have been to see the Changing of the Guard in Arlington?” Brown asked those in attendance. “If you have not, I encourage you to go. It soothes your soul and is such a wonderful thing that our country has to recognize people who gave their lives and we don’t know who they are.

“The tomb guard walks 21 steps and then after they’re about-face, they pause 21 seconds. That is to show the highest respect for the ‘Unknown Soldiers,’” Brown explained. “In their honor we have 21 plants in our garden.”

Enterprise Mayor William Cooper also spoke at the ceremony and thanked those who worked to create the garden.

“This is something that will live on forever,” Cooper said.

Brown encouraged people to visit the new garden and invite others to do so.

“Bring them by and invite to sit in the quiet with their thoughts and memories,” she said.

At its called meeting Thursday, the Coffee County Board of Education approved the following personnel actions:

It’s that time of year when a favorite summertime treat becomes the center of attention. The refreshing, flavorful taste of watermelon will be…

A long-awaited resurfacing project is set to get under way in downtown Enterprise in the next couple of weeks, but Main Street merchants will …

The third year in the history of the Zion Chapel Bass Team is a wrap. The team closed the book on volume three of their tournament fishing the…

Montgomery— On Wednesday, June 22, 2022, Willie Frank Harvis, a 62-year-old from Enterprise, Alabama, was sentenced to 74 months in prison for…

What's happening in and around Enterprise.

Kathy Brown in front of the Never Forget Garden at the dedication ceremony.