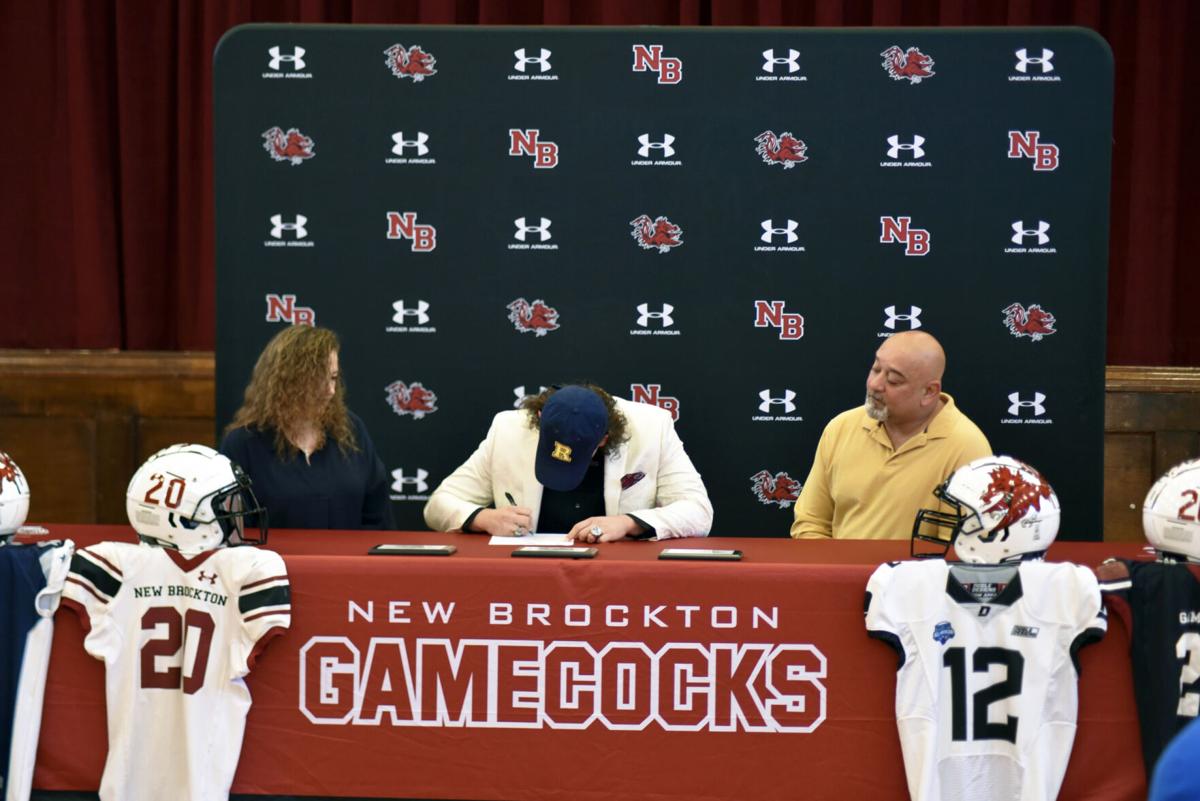 On Friday, March 12, New Brockton senior football player Julian Noble signed his national letter-of-intent to continue his athletic and academic career with the University of Rochester. Pictured with him are his parents, Joplin Nicole and Julius Noble. 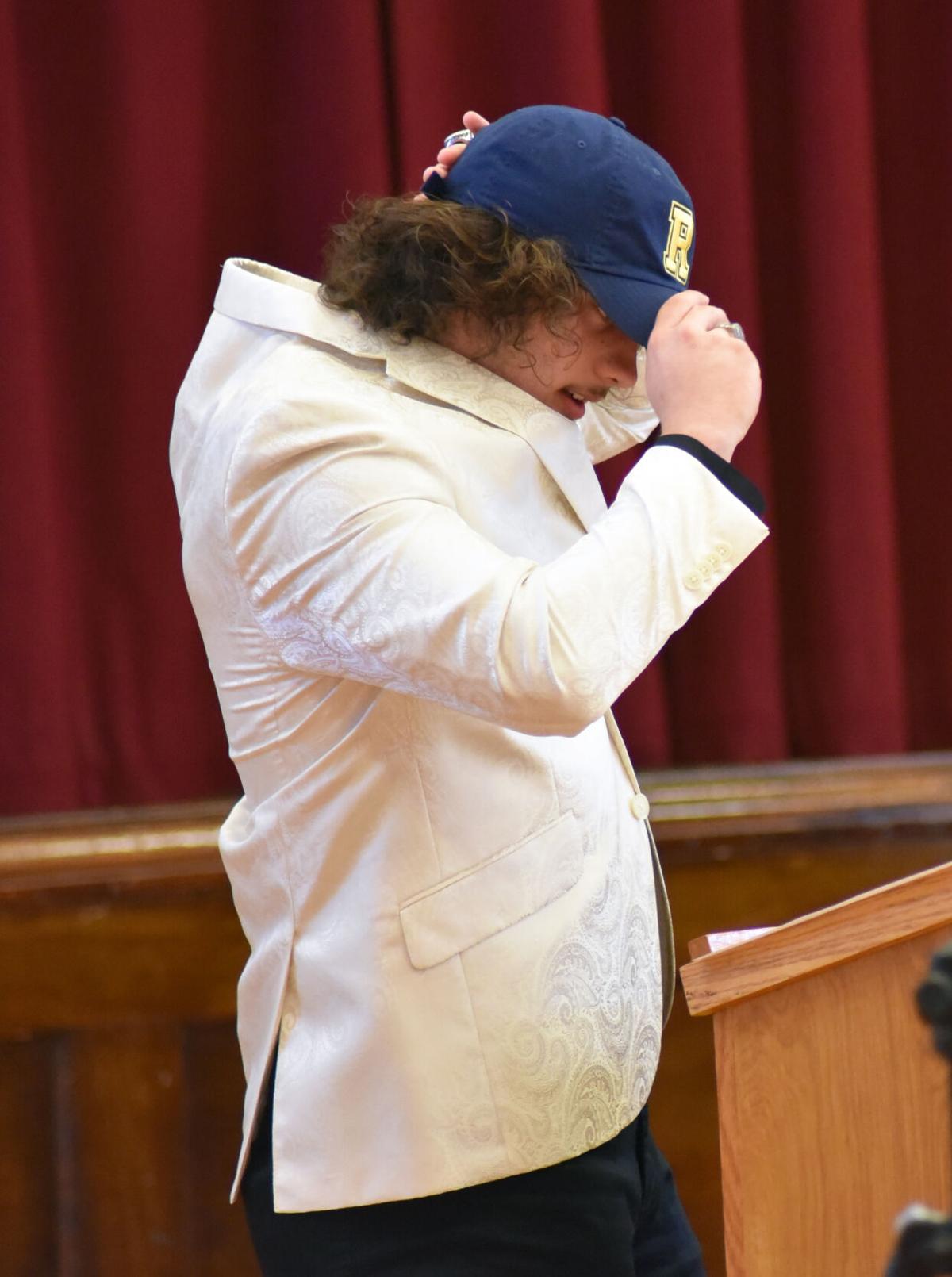 Noble adorned the Rochester cap toward the end of his speech. 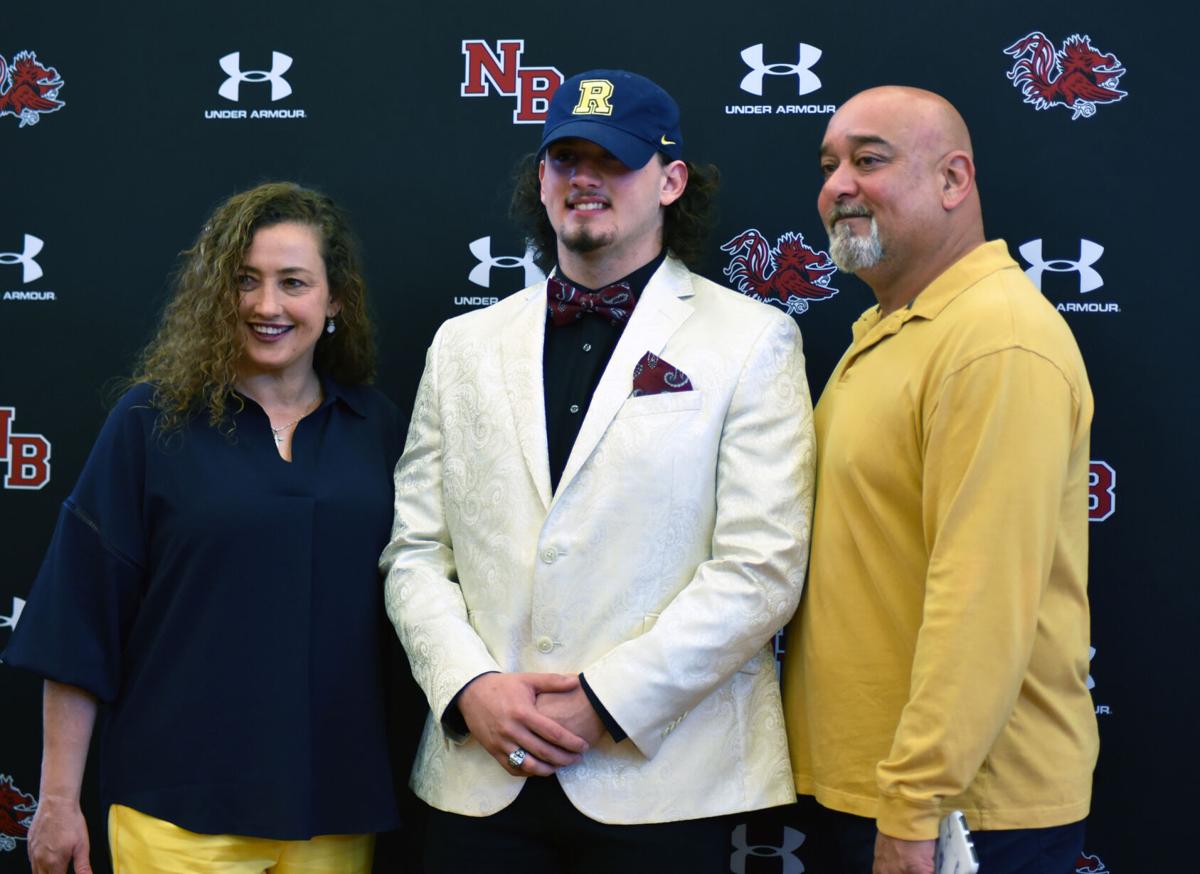 Julian stands with mom, Joplin, and dad, Julius, after the ceremony. 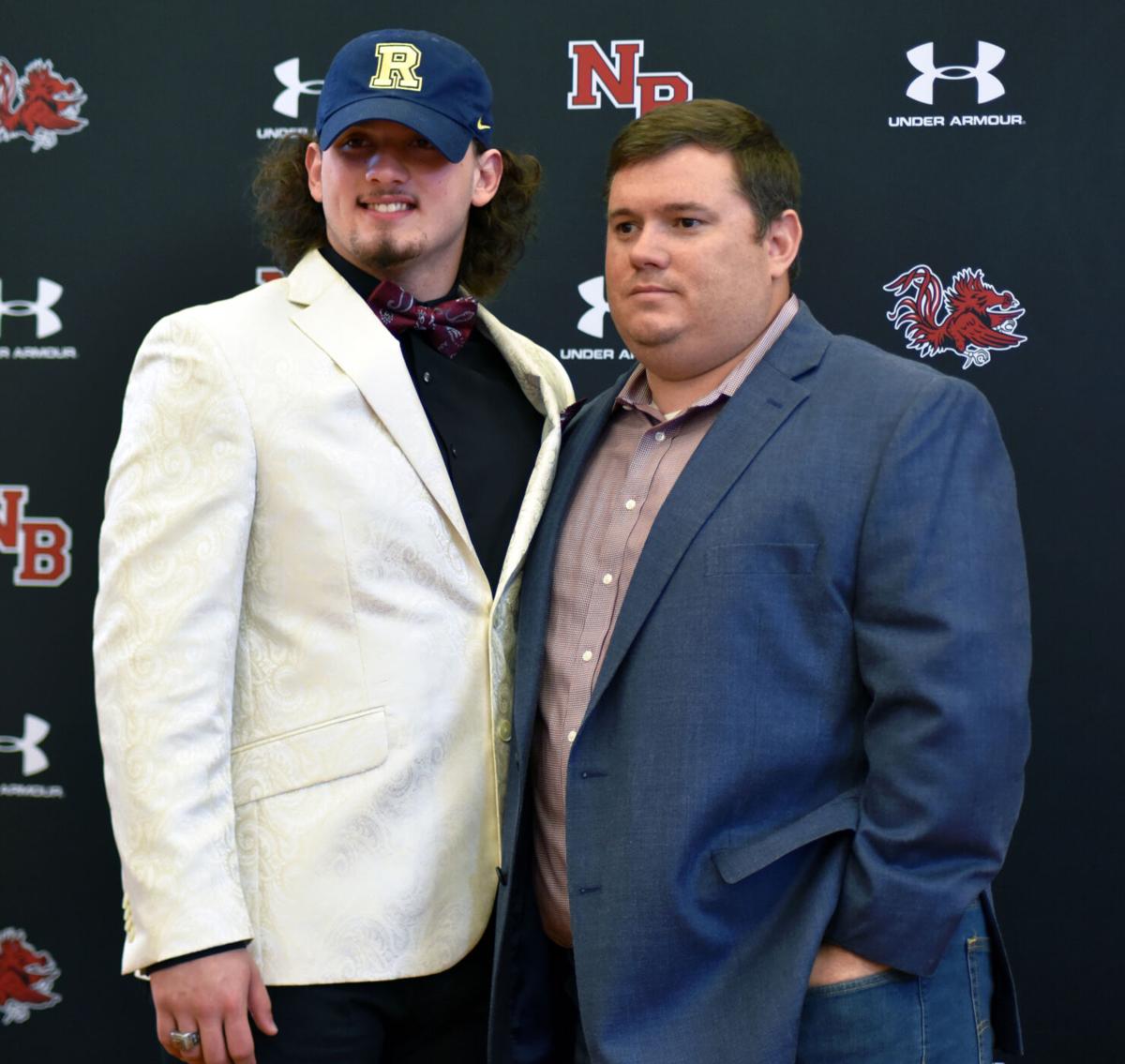 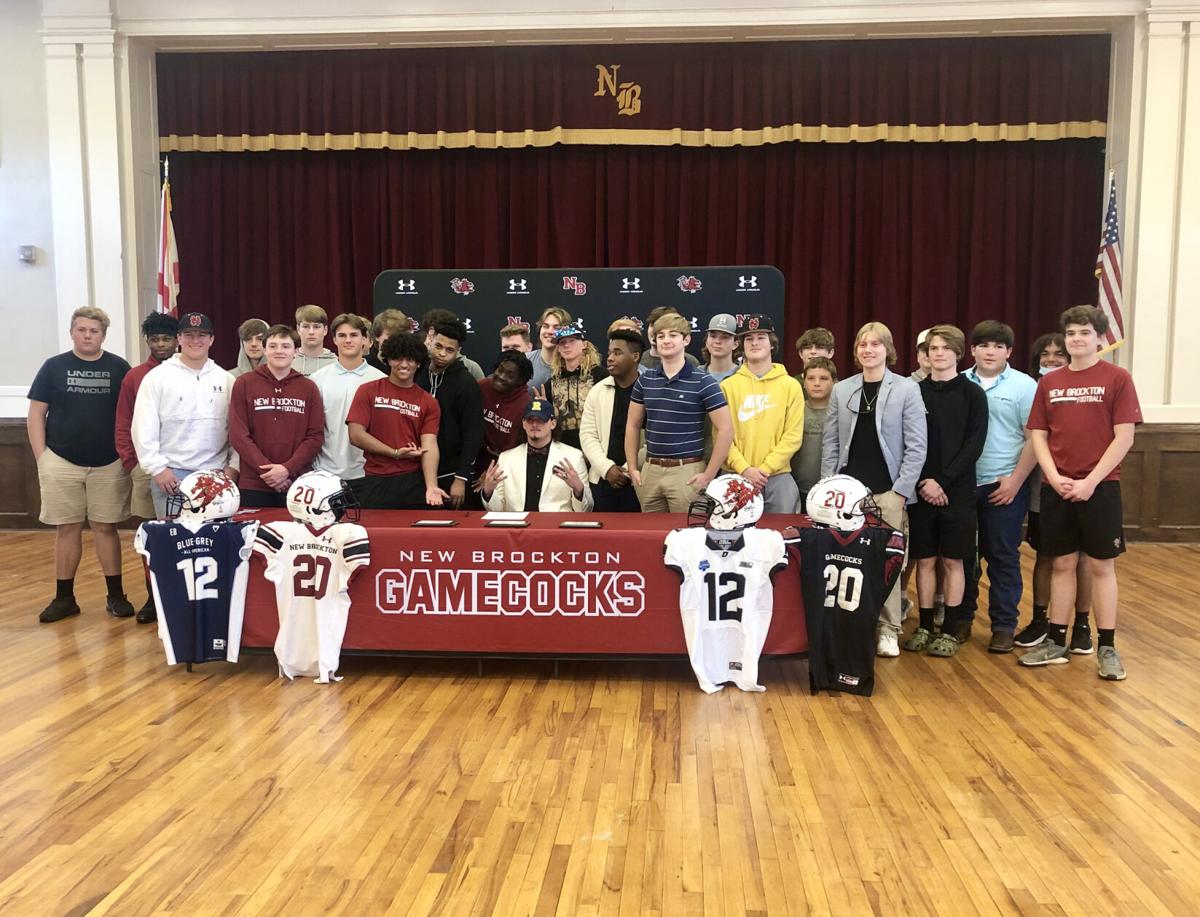 Noble and his teammates after signing his letter-of-intent.

In a crowded auditorium at New Brockton High School surrounded by his teammates, friends, teachers, coaches and family, Julian Noble set the path for the next four years of his life on Friday, March 12 when he officially signed to continue his academic and football career with the University of Rochester YellowJackets in Rochester, New York.

Founded in 1850, the University of Rochester is a private research university with just a 30 percent acceptance rate. While continuing his football career was important to Noble, head coach Zack Holmes said his academic and professional future was at the forefront of his mind when they discussed colleges.

“I think Julian has understood the weight of that decision. He’s taken it as seriously as any person I’ve talked to or any kid I’ve coached,” he said. “His priorities when making this decision have been right and have been more mature. When we talked about all these schools he was looking at, he kept talking about academics while i was thinking about facilities. He said playing college football is great, but my degree is what’s going to get me through life, and that’s obviously a very mature perspective.”

In his speech, Noble made sure to thank just about every teacher he’s ever had for getting him to where he is today, specifically his STEM teachers who first piqued his interest.

“I wish everyone in my speech that I thanked heard it,” he said. “Yes, this is something that’s my day, but it’s really our day. They helped me so much, and I’m so thankful for everyone that showed up. They all mean a lot to me.”

When asked what some of his goals were for his first year on campus, the media in attendance expected a football answer, but Noble’s eyes stayed on what he considers to be the real prize: a four-year degree from a “new Ivy League” school.

“My goal is to get a degree to help myself for the next 40 years, not just the next four, and help change this world,” he said. “Their academics are unbeatable. They have a wide range of studies, a top-tier research facility, everything. And if I want the best education and to be able to play football? That was the best fit for me.”

Noble, who plans on studying to be a chemical engineer, has already helped change the world around him, Holmes said. A leader on and off the field, Noble organized home workouts for his teammates when COVID interrupted spring training and continually mentors his fellow players.

“He took the initiative to do those things and not let quarantine—a pandemic—stand in the way of achieving that dream. He continued to get after it this season and every single week,” Holmes said. “I’m excited to see what not only the next four years hold, but also what his life holds.”

Over the last five to seven years, New Brockton has had at least one player sign with a college, something Holmes is immensely proud of—not just for himself and their program, but for the players and their families.

“For me as a coach, this is a big deal. It’s a big day for our program,” he said. “This means that young man is going on to play football at the next level, which is a dream for a lot of people. I’m really proud of Julian and for keeping that dream and making it a reality, and I’m extremely proud for his family. It’s a big day.”

Although academics was a big factor in his decision on where to attend college, it wasn’t the only one. Noble said he wanted to find the right place for his football abilities and style of play, but also the right coaching staff. He found it all and more under head coach Chad Martinovich.

“The coaches were actually with me last March, so we’ve been talking for a whole year,” he said. “When we went up there to visit, it was so cool to see them. Those guys really are professionals, and I really think they they’re going to use me to my maximum ability. I’ve followed them for a while, and they’re program changers.

“I’ve already bought in. I like how they do things. They’re legit coaches, so that’s a big deal for me. I’m just grateful that I get to have another season and get the best education with some top-tier coaches.”

Martinovich, who has been the head coach for three years, has no doubt Noble is going to make an immediate impact.

“He checks all the boxes for us. A kid that appreciated the type of high-end academic institution this is and the type of opportunity from a degree and career standpoint that he would get here while also having the skillset to help us very, very early in his career from a football standpoint,” he said. “He’s really kind of epitomizes the term ‘student-athlete.’ We’re in the process and rebuilding this program into a championship-caliber program, and we need kids like him to help us do that.”

Martinovich said they’re expecting him to play as a linebacker, but that there are multiple positions he can play within their scheme.

“Once he gets here, we’re gonna figure out what the best fit is for him,” he said. “He has a skillset to where I think he could play all four of our linebacker positions, so we’ve just got to figure out what he picks up the quickest, what the best fit is for him so we can find a way to get him on the field as quickly as possible so he can contribute.”

One of the day’s most-asked questions was how a small-town Alabama boy was going to adjust to life in New York.

“It’s definitely going to be cold,” Noble said. “The heat here is unbeatable, and I’m glad to get out of that. It’s going to be a big adjustment, but I can make it happen. I trust myself. I think I’m responsible enough, and I think I’m ready for it.”

Having recruited players from all over the country, Martinovich and his staff have experience in helping to ease the transition.

“There’s a transition from high school to college no matter where you’re going, whether it’s in your backyard or 3,000 miles away,” he said, “but we have a great culture here in place that allows us to help all of our incoming players with that transition, so he’ll be part of our family and have guys looking out for him and helping him through the process. We have pretty good representation from the south on our roster, so he’ll feel right at home. He’s just gotta buy some long sleeves.”

Noble is part of Martinovich’s third recruiting class since accepting the job and leaving a nine-year head coaching position at MIT. He said they’re a young team right now, but that shouldn’t be a problem for Noble.

“New Brockton taught me how to be a leader,” Noble said. “Because of COVID, we had few in numbers, but I had to step up and teach these guys whatever I could so maybe they could be leaders, too.”

The Pilot Club of Enterprise has announced the nominees for Man, Woman and Youth of the Year.

Lydia Plant, a fourth grader from Enterprise, was named Top Cookie Seller in southern Alabama for selling 10,300 boxes. She also broke the sta…

Have you noticed the Hometown Heroes banners on display in downtown Enterprise? Heard about the downtown Spring Fling scheduled for April 17? …

If close counted for much of anything in fast-pitch softball, the Enterprise State Community College Weevil Women, all nine of whom played aga…

Severe weather expected through the weekend

Several rounds of severe weather and heavy rainfall will be possible tonight through the weekend as a cold front stalls out over the area, the…

On Friday, March 12, New Brockton senior football player Julian Noble signed his national letter-of-intent to continue his athletic and academic career with the University of Rochester. Pictured with him are his parents, Joplin Nicole and Julius Noble.

Noble adorned the Rochester cap toward the end of his speech.

Julian stands with mom, Joplin, and dad, Julius, after the ceremony.

Noble and his teammates after signing his letter-of-intent.