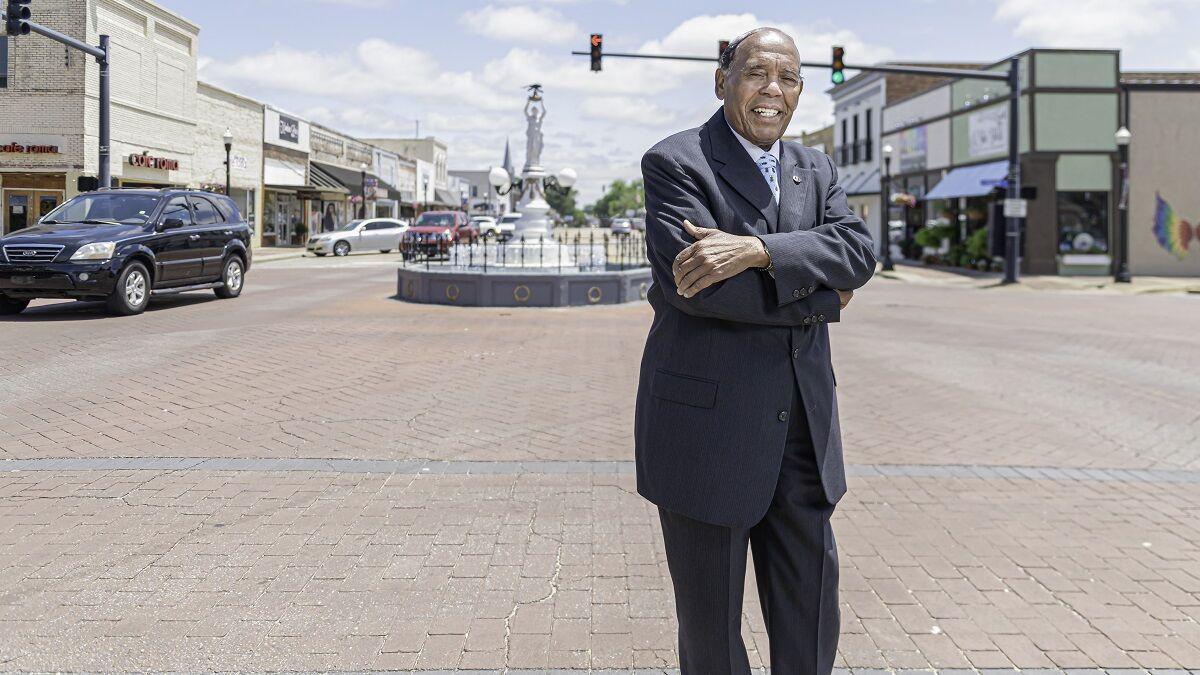 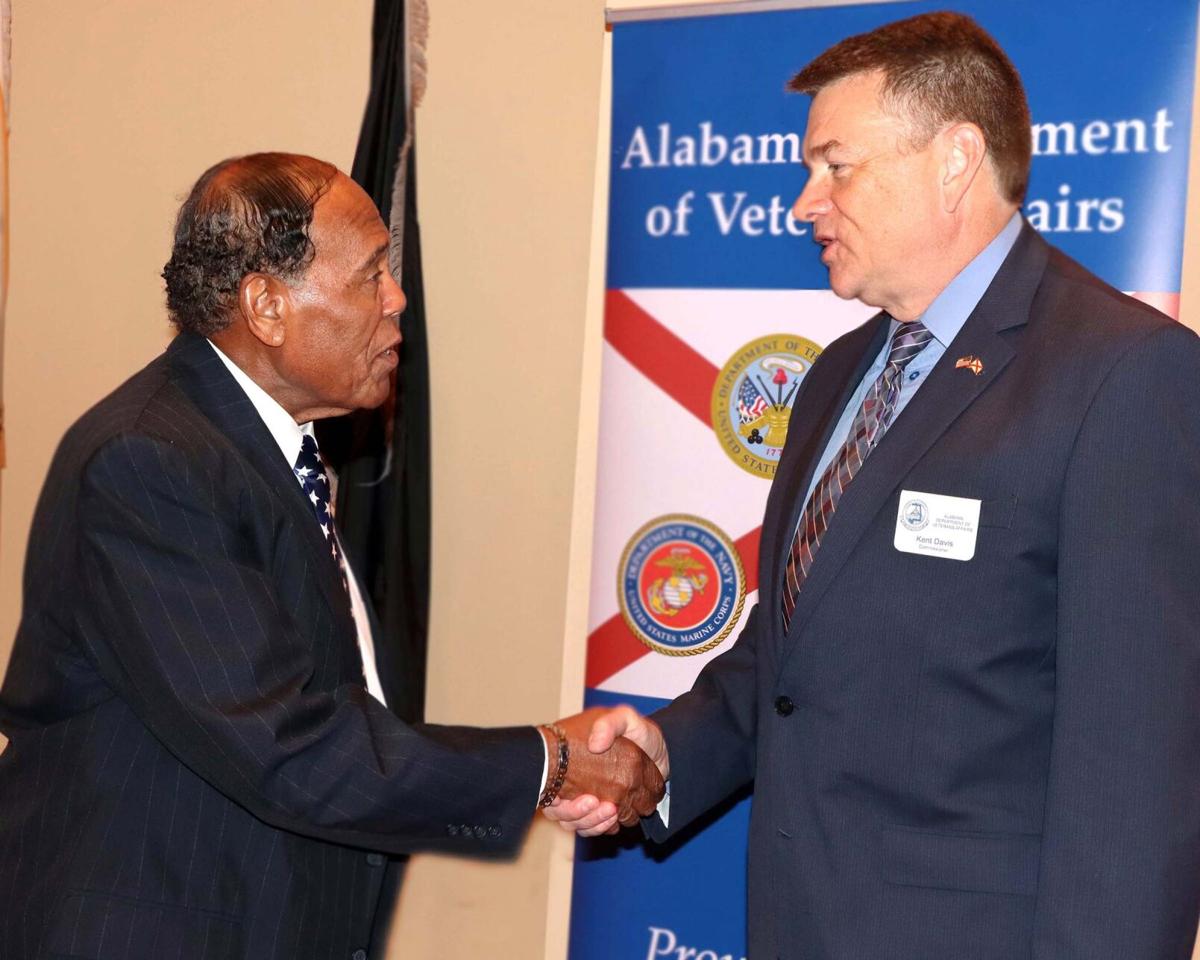 Mayor Cooper shakes hands with Alabama Department of Veterans Affairs Commissioner Kent Davis following the announcement of the name of the veterans home soon to be built in Enterprise.

“I have always approached public service with a spirit of commitment, integrity, cooperation and unity,” he said. “I love the city of Enterprise, and I strive to be honest, fair and kind to all.”

Over the years, Cooper has watched the community grow in impactful ways.

“Working together, we have been able to move this city forward significantly,” he said. As a forward-thinking mayor, Cooper understands that “the future becomes today.”

During the ongoing pandemic, businesses suffered and struggled. But most survived and many prospered. In fact, the city of Enterprise issued 533 new business licenses in 2020, reflecting an increase of 134 from 2019.

Cooper said it has been a team effort to grow the city.

“Practically all of the achievements we have made in Enterprise in the past 30 years … have been made possible by people working together. I have tried to encourage unity, compromise and reconciliation to maintain a good working relationship between the city, its boards and commissions, other local agencies, businesses and state and federal agencies,” Cooper said.

Budget growth is one indicator of how the overall economy and the city’s financial operation has evolved during the years. The city’s $14 million general fund budget has more than doubled since 2000 as an expanding population places increasing demands on services. The number of residents in Enterprise has grown by about 36% over the past 20 years.

Housing sales and new construction are thriving. Businesses are interested in locating in Enterprise, whether it’s on Boll Weevil Circle, which rings the city, or in one of the shopping centers downtown.

“We have several commercial projects in the works as well … and we are working with other business prospects who are considering locations in the city,” Cooper said.

One of the initiatives in which Cooper takes pride is the Main Street Enterprise program. Designated by Main Street Alabama after a lengthy, intense competitive process, it is now in its third year.

“Main Street Enterprise has been a wonderful tool to enhance the downtown experience,” Cooper said. “We are very proud of our downtown Enterprise, with its mix of retail and historical elements, combined with great food and cultural experiences. The occupancy rate of buildings downtown is high, and buildings are being restored or renovated regularly for new locations.”

Enterprise is also working to improve roadways. The city has been working with the Alabama Department of Transportation to start a five-lane project from Salem Road to Boll Weevil Circle, with plans to do more upgrading soon to Highway 167 North.

The Enterprise Municipal Airport is expanding, with a new $1 million terminal building that opened in March.

“We are still elated about our selection last year to be the site of the Alabama Department of Veterans Affairs‘ next long-term care facility,” said Cooper.

The 182,000-square-foot facility is expected to be under construction by January 2022 and to have 175 beds to serve veterans. There are about 7,000 veterans in the community. On July 9, the State Board of Veterans Affairs voted to name new state veterans home in Enterprise after Vietnam War hero and Medal of Honor recipient Army Command Sgt. Major Bennie Adkins.

With so much growth happening, Cooper said he must stay focused.

“One of the many lessons I’ve learned is that you must be resilient in your personal life, in your career and in your public service efforts.

“In public service, you are going to face all kinds of adversity,” he said. “But from the values instilled in me by my parents, I understood that if you are committed to something for the right reasons and pursue it in the right way, with honesty and integrity, you can overcome or bounce back from just about anything.”

Cooper grew up during segregation and the civil rights movement. He never gave up on the life lessons his parents taught him about a good work ethic and commitment. He started his career as a musician, playing the trumpet and teaching band at various schools. He often says his life moved “from musician to politician.”

Power Moves, an ongoing series by Alabama NewsCenter, celebrates the contributions of multicultural leaders in Alabama. Visit AlabamaNewsCenter.com throughout the year for inspiring stories of those working to elevate the state.

The Enterprise City Council passed an ordinance establishing an entertainment district in the city’s downtown area at its Tuesday evening meeting.

AUBURN UNIVERSITY, Ala.—Hummingbirds are a beautiful and exciting part of Alabama summers. Hummingbird feeder etiquette is not widely known, b…

Mayor Cooper shakes hands with Alabama Department of Veterans Affairs Commissioner Kent Davis following the announcement of the name of the veterans home soon to be built in Enterprise.