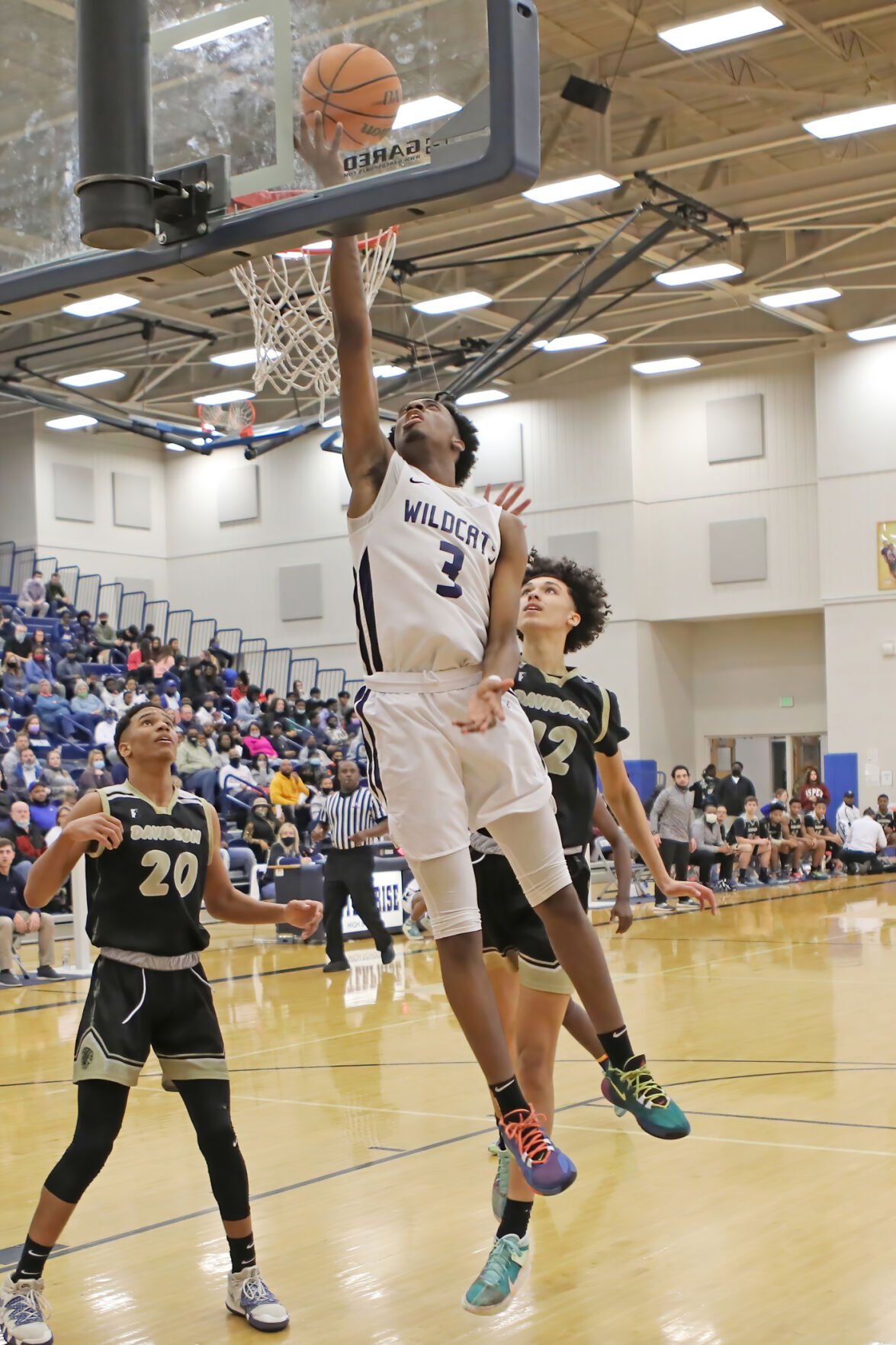 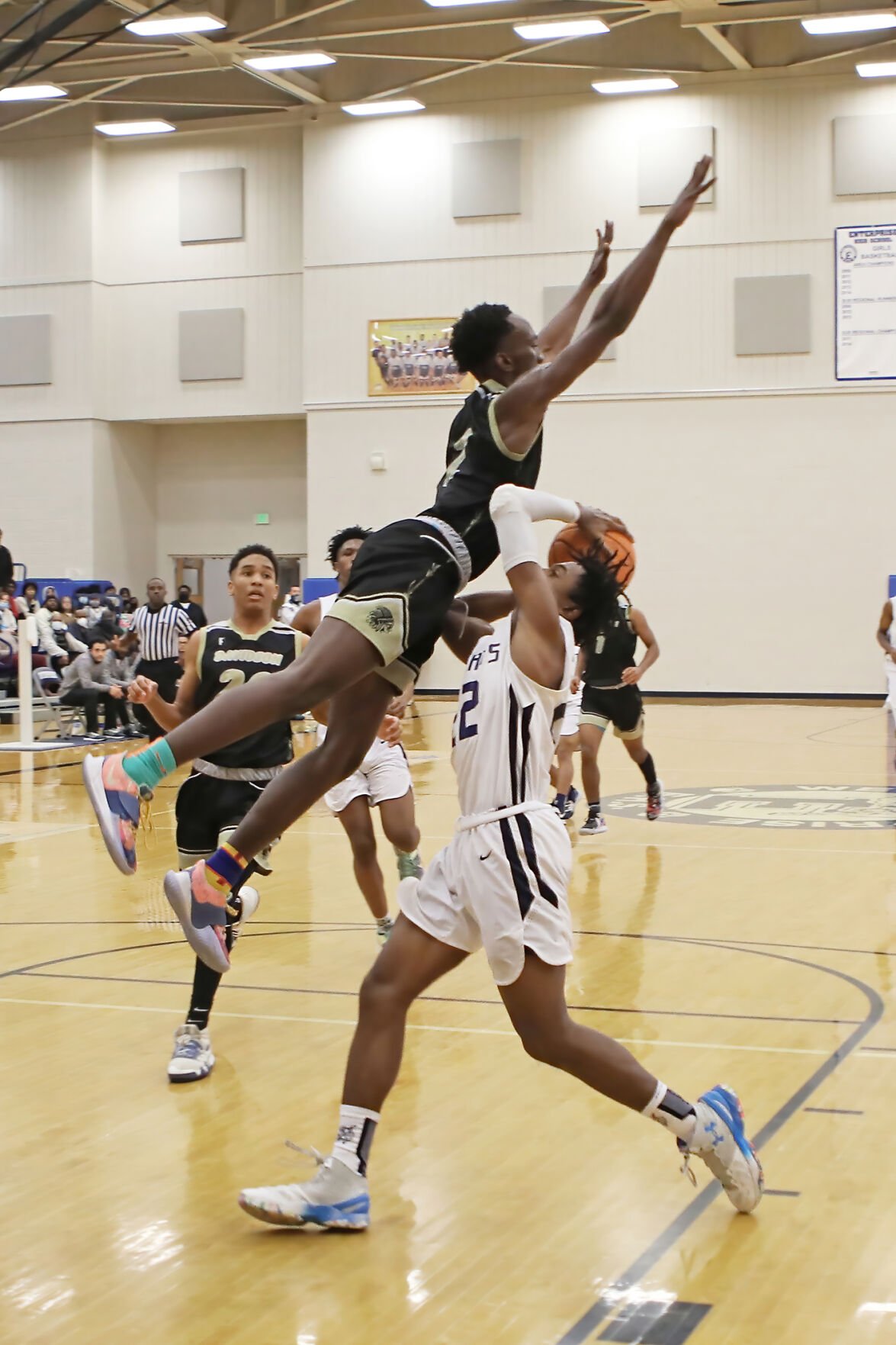 Quentin Hayes draws a foul in the second half of Friday night's game. 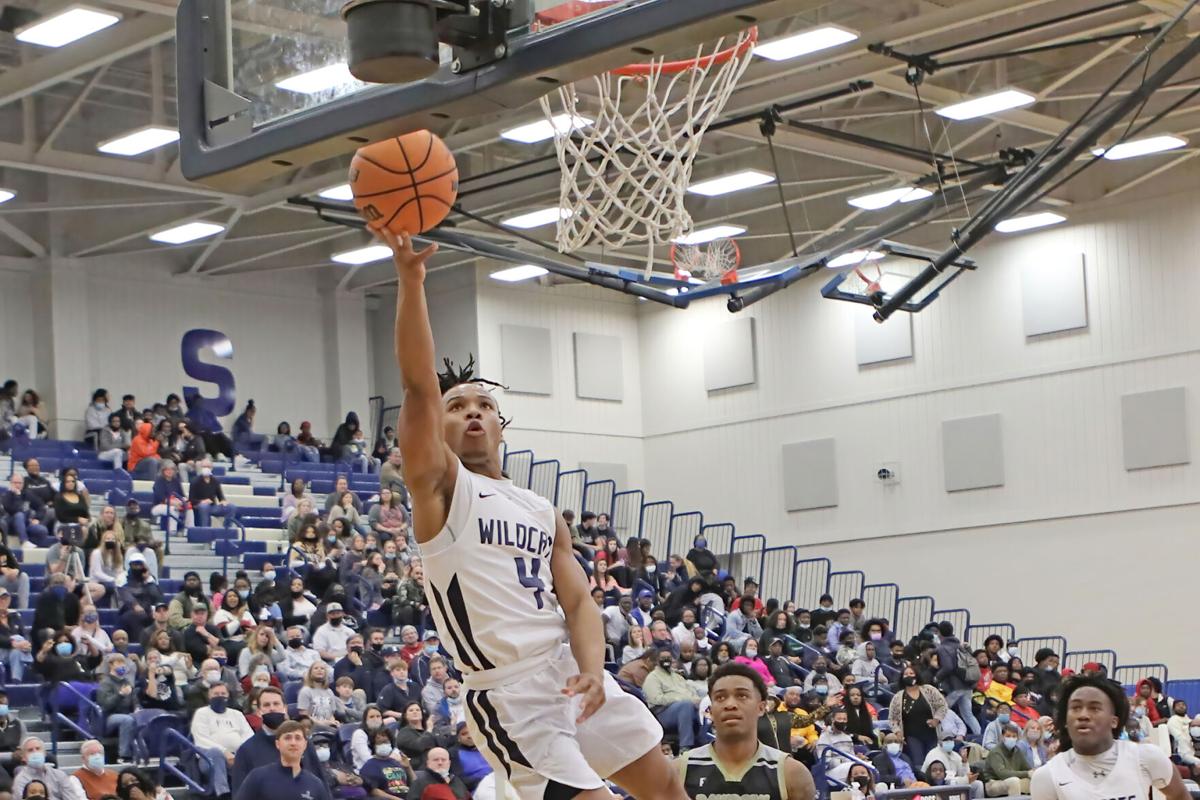 Jalen Cunningham scores two of his seven points late in the third quarter of Enterprise's 47-39 victory.

The Enterprise boys’ basketball team showed heart Friday night in Wildcat Arena and came away with a 47-39 victory over the Davidson Warriors of Mobile in the Class 7A regional semi-finals.

The 32-minute game was a battle of the defenses, and several timely fouls late in the fourth in Enterprise’s favor sealed the deal.

Head coach Rhett Harrelson said “battle” was an accurate description of how the game played out.

“I thought we competed despite not playing real well, and I think it’s a really good sign, at this time of year, to be able to win games when you don’t play as well as you’re capable of playing,” he said. “I thought we competed and found a way to win a playoff game, so I’m proud of them for that.”

In the second-lowest scoring game of the season, the Wildcats trailed for less than four minutes the entire match—and only in the first half. Enterprise opened the game on a three-point run thanks to a free throw from Elijah Terry and a steal and score from Josh McCray before Davidson scored six unanswered points. Two points from Jalen Cunningham, a steal and another foul on Terry gave the Cats a 9-8 lead going into the second half.

Despite several defensive rebounds, Enterprise was only able to pad its score by two in the opening minutes of the second quarter, and an Enterprise foul put the Warriors back within one. Jared Smith and a foul on McCray put the Wildcats up by five, but Davidson found a way to tie it up with 3:42 to go before halftime. After falling behind by two after a Warrior 3-pointer, a shot by Terry regained the lead, and Smith and Quentin Hayes each added two to end the half up 23-20.

The message at halftime was to be grateful they were ahead.

“The only positive at halftime was that we were winning, and that’s what I told them,” Harrelson said. “I said, ‘Guys, despite not really playing well in that first half, we’ve got the lead. We’ve just got to come out and beat a tough team and get shots instead of turning the ball over.’

Cunningham opened the second half with a nice layup followed by a free throw before Davidson again brought the score within two. After a series of unforced turnovers, Enterprise found its footing and scored six unanswered. Mykel Johnson and Marshawn Fitzpatrick grabbed a pair of defensive rebounds, Hayes landed another basket and Enterprise closed out the third 36-29, its largest lead of the game.

The fourth quarter saw a multitude of fouls, turnovers, steals and rebounds, but not much shooting. Enterprise scored five of its 11 fourth quarter points off free throws, and Jordan Hines can account for three of those five. Harrelson said those scores gave his team the spark it needed to finish the game.

“There were a couple of times late third quarter, early fourth quarter where it’s a three, five point game, and Jordan Hines, I thought, really gave us a spark. Without him, I don’t think we win that game,” he said. “Elijah Terry had a really good putback dunk that sparked us and got us going, too, but Jordan just keeps coming to my mind stepping up to the free throw line and hitting a big basket in the second half.”

Terry led the team in scoring with 14 points, followed by Hayes with nine, Hines and Cunningham with seven, McCray and Smith with four and Keion Dunlap with two.

Despite not having a successful game overall offensively, there were things the team did well, especially in the final few minutes where it mattered most.

“I thought we did a really good job offensively of making them come out and guard us when we had the lead with three to four minutes left. We were trying to make them come out and guard us and we got some matchups that we liked and were able to hold the ball for 30, 40 seconds at a time,” Harrelson said. “Eventually, they were having to foul, and we stepped up and knocked them down and were able to put it away.

“We battled and stayed with it and kept fighting and found a way to win. We didn’t hit a single 3-pointer, and we only shot six. That hadn’t happened to us all year. We turned the ball over 20-plus times, and we won a playoff game, so… Those are things that if you hear before the game, if you’d have told me that we weren’t going to hit any 3s and we’d have 20-plus turnovers, I’d have thought we were in trouble. We’re just happy to get a win and move on. Let’s learn from it and get ready to play Friday.”

By Saturday at noon, Harrelson had already re-watched the game and said the defense played better than he thought while the game was live. Although they gave up 20-plus turnovers, they also caused just as many. While those turnovers didn’t amount to points in every case, they interrupted Davidson’s plans and caused changes in momentum in their favor.

“They (Davidson) weren’t able to run really any of their half court sets. I thought we really disrupted them and did a good job taking them out of what they wanted to do offensively,” he said. “An area we still have to improve in is giving up offensive rebounds. We gave up way too many Friday night. We’ll work on that this week.”

Enterprise (20-6, 8-0) will compete in the Elite 8 against Mary G. Montgomery High School (20-5, 9-3) out of Semmes Friday morning at 11 a.m. at Garrett Coliseum in Montgomery. This will be the first road game for the Wildcats after six straight home games, but Harrelson isn’t worried about his team’s focus on the road one bit.

“With this group, there’s something about being together and loading up the bus, I don’t know. We’ve played well on the road all year,” he said. “And I don’t want to say they haven’t thought about it, but it’s not something they’re concerned about.”

Byrd thanks Wallace for start in law enforcement

Christopher Byrd, a police officer with the Enterprise Police Department, credits Wallace Community College for helping him get his start in l…

After recognizing the employees and student of the month and teachers of the year last Tuesday, Enterprise City Schools Board of Education mem…

Mechatronics meeting the needs of industry

Since its start almost two years ago, the Mechatronics program at Enterprise State Community College has grown to meet the needs of not only b…

The Enterprise Chamber of Commerce is excited to host the World’s Smallest St. Patrick’s Day Parade on March 13. Since 1993 the Chamber has be…

City events planned through end of the year

Several organization representatives turned out to the Enterprise City Council meeting Tuesday night to have their yearly events approved.

Hillcrest Elementary School’s teacher, support staff and student of the month were recognized Tuesday evening during the Enterprise City Schoo…

Quentin Hayes draws a foul in the second half of Friday night's game.

Jalen Cunningham scores two of his seven points late in the third quarter of Enterprise's 47-39 victory.