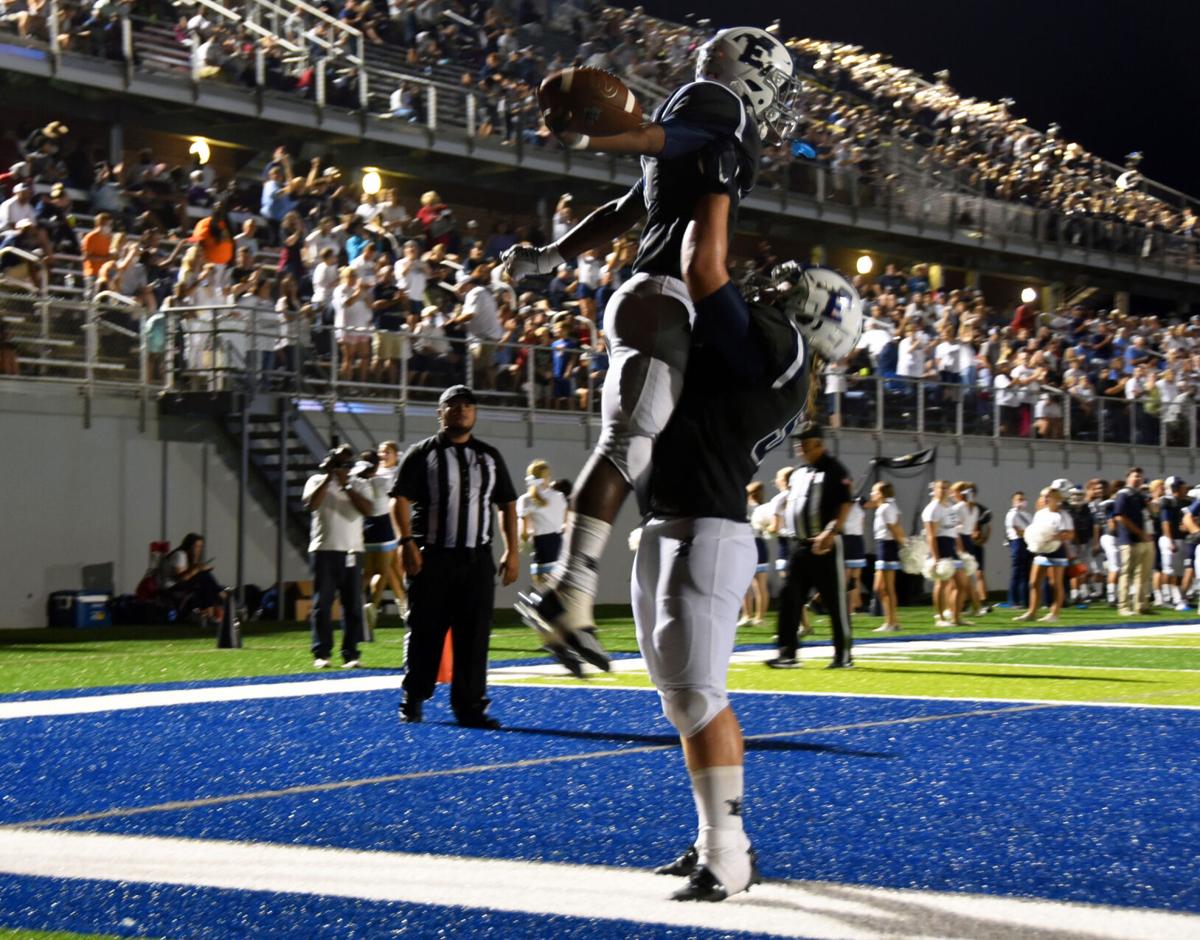 Amare Griffin, left, and Chris Foster, offensive lineman, celebrate after Griffin’s third and final touchdown of the night, a 13-yard run with 3:16 left to play. 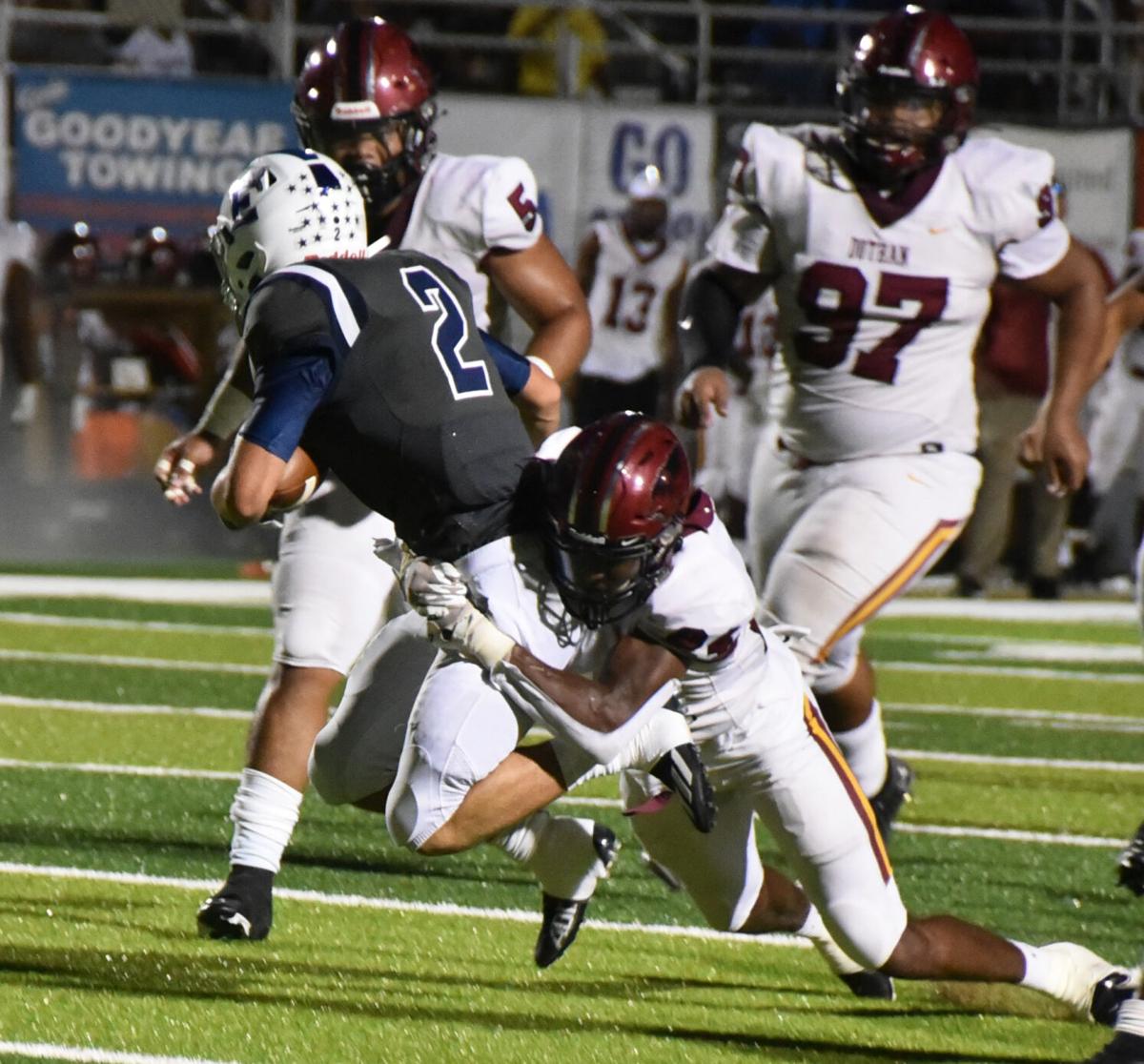 Sam Whitaker had a 15-yard reception for the Cats in the first half that helped set up the second touchdown of seven for the Wildcat offense.

Friday marked only the third game in the natural geographical football rivalry between Enterprise High School’s Wildcats and Dothan High School’s Wolves; the teams had a win apiece in the relatively new series leading into Friday night’s game.

Wildcat Stadium was the site of the rubber game in what was a classic 7A battle as far as the Cats were concerned in their 48-14 shellacking of the Wolves.

Enterprise (3-0) didn’t run at will Friday; the Wolves didn’t seem to have a defender named Will.

The Cats ran at everyone else in white jerseys 42 times for 429 yards, were 2-of-4 passing for 13 yards, punted once and didn’t suffer a turnover.

The Cats didn’t need many gifts.

After receiving the opening kickoff, Enterprise marched 72 yards in 10 plays with Aiden White covering the final 22 yards for the game’s first score. Drew Pickard added the PAT giving EHS a 7-0 lead with 5:35 to play in the first quarter.

Penalties were frequent the rest of the period and the score remained unchanged until 8:06 remained in the second quarter when Amare Griffin scored the first of his three TDs on a 1-yard run that capped a 7-play, 40-yard drive.

Pickard’s PAT doubled the EHS lead to 14-0, but not for long.

Dothan’s offense came alive, marched 56 yards in 8 plays and scored half its points on a 2-yard run by Raymon Blackmon and the PAT by William McCarthy with 4:55 left in the first half and the score 14-7.

That was as close as the Wolves would get the rest of the way as the Cats used three plays to answer the bell.

Mykel Johnson dashed 54 yards for the first of his three TDs on the night with 3:18 left before intermission. Pickard’s PAT increased the EHS lead to 21-7, where it remained until the 9:44 mark of the third period when Griffin exploded for a 38-yard touchdown run.

Pickard’s PAT increased the EHS lead to 28-7 for a little more than three minutes.

After EHS defenders forced a 19-yard DHS punt, the Cats used three plays to cover 51 yards; the touchdown was a 32-yard burst by Johnson with 6:30 left in the third quarter.

The Wolves howled for the second and last time on their next possession, covering 75 yards in 11 plays; Blackmon scored his second TD and McCarthy added the PAT to change the score to 35-14 with 1:23 to play in the third quarter.

A holding penalty on Enterprise’s next series erased a 22-yard Johnson touchdown, but two snaps later, the junior running back bolted 37 yards for a TD the officials counted, and with Pickard’s PAT, Enterprise led 42-14 with 7:45 left in the game.

On its next possession, Dothan was penalized 10 yards for holding and 15 yards for unsportsmanlike conduct during and after the same play, ultimately resulting in a 38-yard DHS punt that put the Cats in business at their 37-yard line for the game’s final scoring march.

In four plays, the Cats lit up new numbers on the scoreboard; Griffin got the points on a 13-yard run with 3:16 to play, bringing the score to its final 48-14.

Enterprise was penalized four times for 30 yards and Dothan was flagged 12 times for 75 yards of accepted penalties.

Griffin had a game high 192 yards on 17 rushing attempts to go along with his three scores. Johnson ran for 137 yards on 10 carries, three for touchdowns.

Whitaker had a 15-yard reception for the victors.

Enterprise is scheduled to host Davidson (1-1) next Friday.

The Davidson series, which began in 1968, stands 3-3 after the Cats beat the Warriors in semi-darkness at Baker High School’s Hornet Field 52-13 last September 11.

Amare Griffin, left, and Chris Foster, offensive lineman, celebrate after Griffin’s third and final touchdown of the night, a 13-yard run with 3:16 left to play.

Sam Whitaker had a 15-yard reception for the Cats in the first half that helped set up the second touchdown of seven for the Wildcat offense.