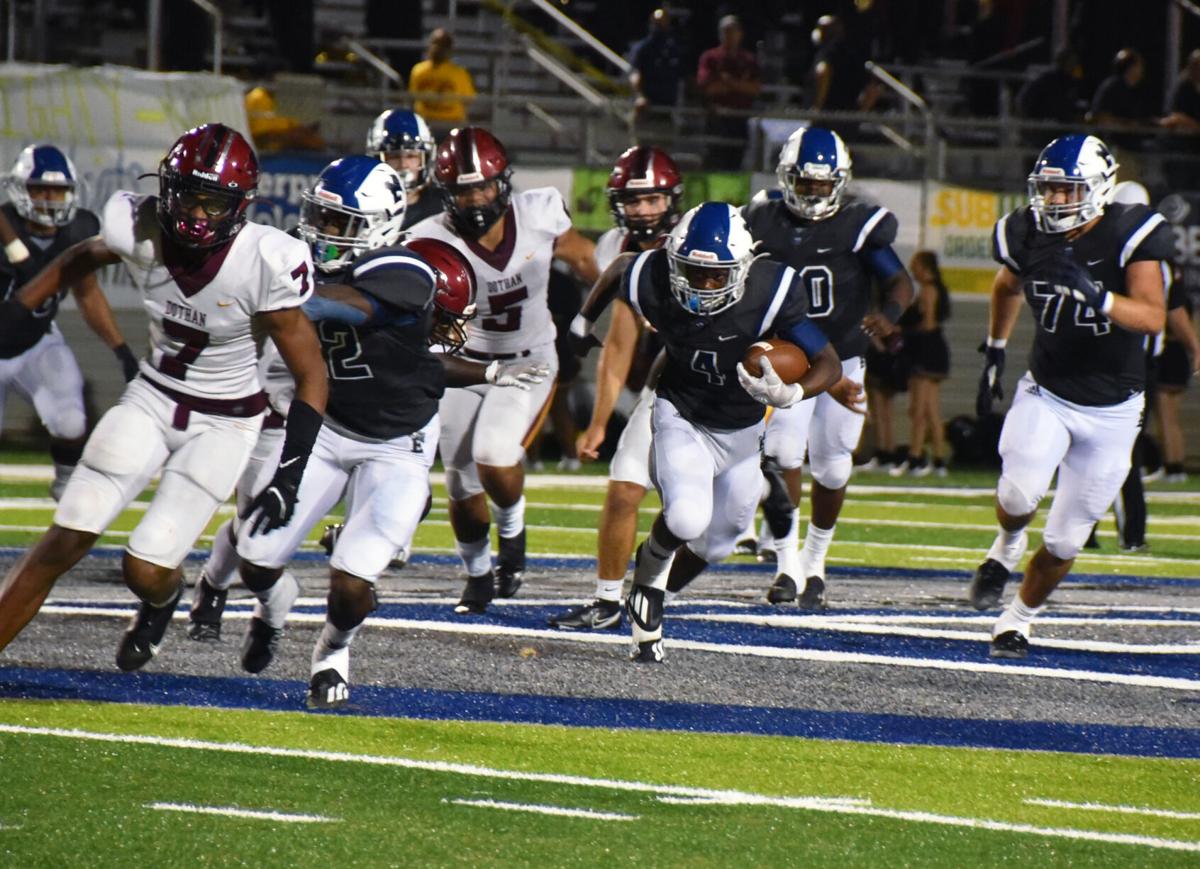 Amare Griffin, wearing No. 4 in Friday’s game instead of his usual No. 3, scored three touchdowns for the Wildcats in the 48-14 victory against area rival Dothan. 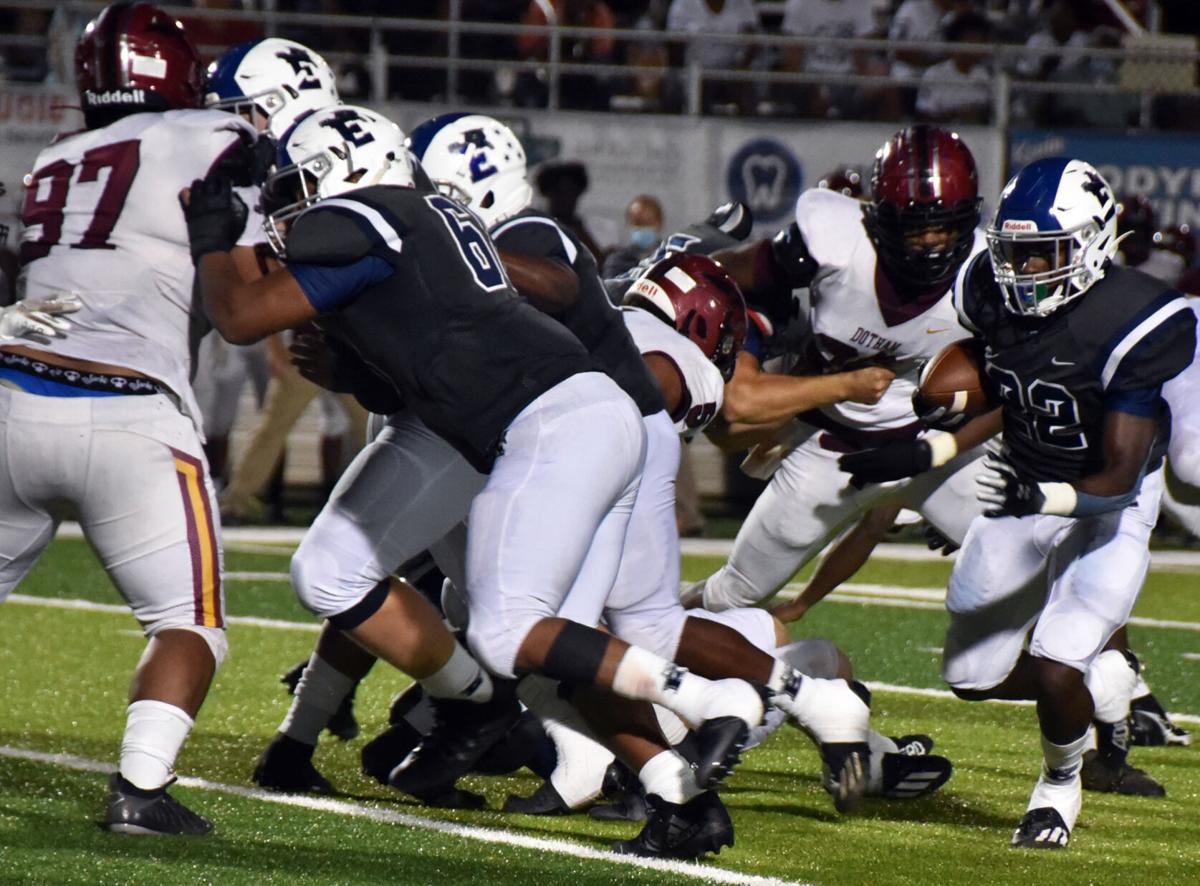 Left: Mykel Johnson (22) also added three touchdowns for the ’Cats on runs of 54, 32 and 37 yards. In total, the Wildcat offense rushed for 431 yards with 13 of the 41 rushing plays going for 14 or more yards. Right: Enterprise’s defense held the Wolves to just 165 yards and six first downs, including 65 yards and two first downs in the opening half. 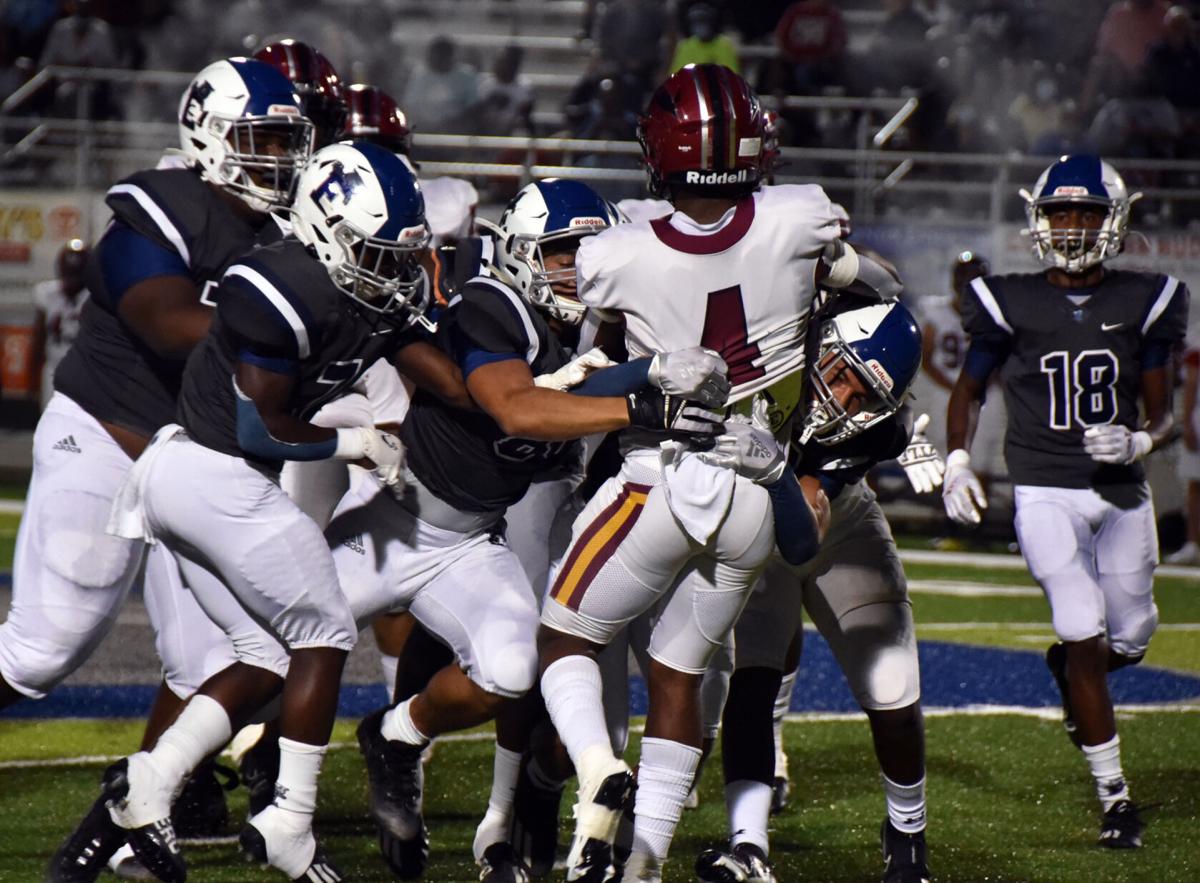 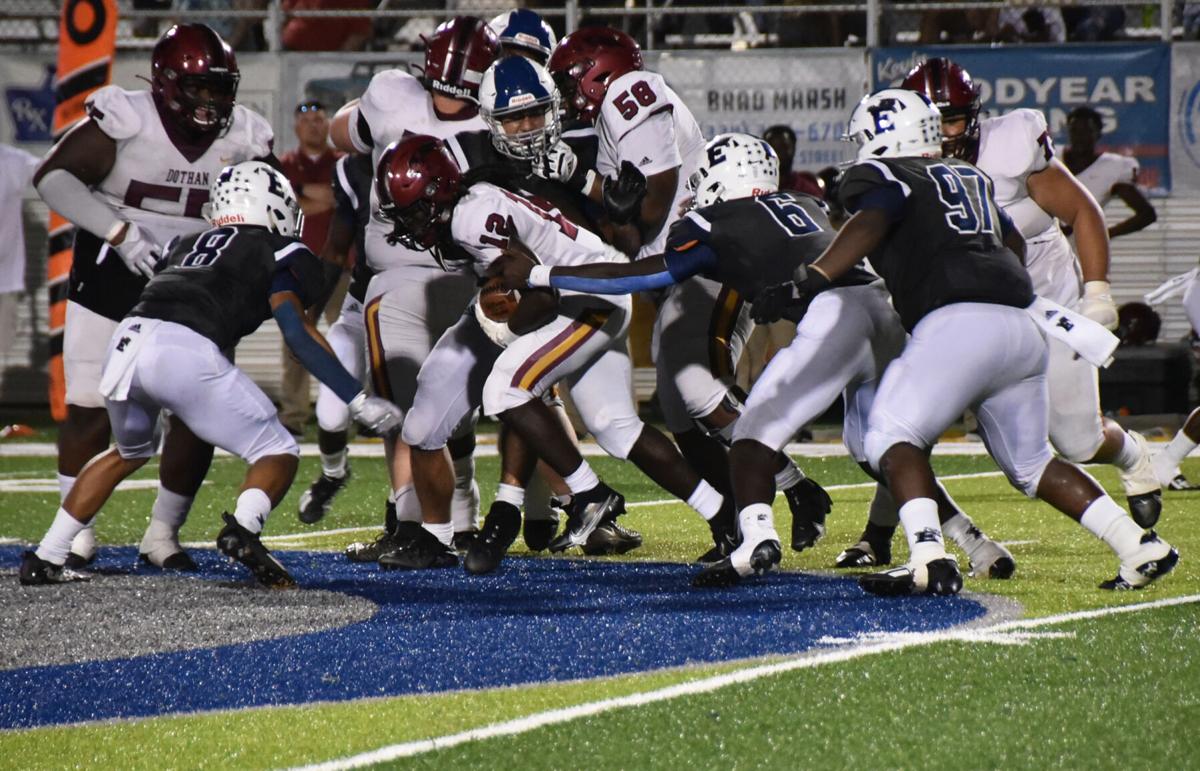 Enterprise held Dothan to 3-of-11 third down conversions, and forced three straight three-and-outs in the first half.

Its defense was pretty stingy most of the night as well.

With the offense and defense clicking, the Wildcats dominated the Dothan Wolves 48-14 at Wildcat Stadium in a Class 7A, Region 2 contest.

“It was a good rivalry win, but more importantly it is a big region win,” Enterprise head coach Rick Darlington said. “It is hard to fight back when you lose this one in the region. I am glad to be where we are, but we still have to keep getting better.”

The Wildcats scored on two of their first three possessions to build a 14-0 lead by early in the second quarter. They built the advantage to 21-7 at the half and scored on their first four second-half series to put the game away and avoid a repeat of last year’s Prattville game that EHS lost in the second half.

“We jumped out on them pretty good and got up two scores at the half,” Darlington said. “We reminded them (the players) how it was at Prattville last year and that we had to put it to bed (finish it).”

It was a night of struggles for Dothan, which finished with 165 yards and six first downs overall, including just 65 and two first downs in the opening half.

“We got our butt kicked,” Dothan head coach Smitty Grider said. “It is what it is. It’s football.

Grider, whose team travels to No. 3 Auburn next week, said his team has to learn how to get in a solid frame of mind for games.

“We have to figure out how to get our kids to settle down and play in a big game and not let the game be bigger than what it is,” Grider said. “We kind of went haywire a little bit on lining up and where we are supposed to be. They took advantage of it. They have a good football team.”

Enterprise, which uses a lot of pre-snap motion and shifts to different formations out of the spread and its single wing offense, was efficient, scoring on 8-of-11 possessions with two series ending with the half and the game. The Wildcats punted only once and didn’t turn the ball over.

Mykel Johnson and Amare Griffin both rushed for three touchdowns and Aiden White added the other TD for Enterprise.

“We have some good players (on offense) and the good thing is there is not many seniors over there – our quarterback, two linemen and one of our backs and that is pretty much it,” Darlington said. “It is kind of a young offense.

“We do different things on offense that people don’t see all the time so it is hard to prepare for in a week. I am glad we have backs who block for each other and a line that blocks.”

Dothan had a lot of issues defensively against the motion and shifts resulting in eight offside penalties during the night.

“We had so many penalties,” Grider said. “We worked all week on that in the way they shift and move. That was just a lack of discipline and focus.”

Enterprise was also effective on third downs, converting 8-of-11 on offense, while holding Dothan to 3-of-11.

“Football is a crucial down game in third and fourth downs,” Darlington said. “That means you either get off the field or keep things moving, for both sides. It is something that we do emphasize.”

Enterprise set the tone of the night with a time-consuming march to open the game. The Wildcats marched 62 yards in 10 plays, eating up 6:25 off the clock. They overcame a 17-yard loss on a fumbled reverse with a 32-yard run by Griffin on 3rd-and-26 and converted a 4th-and-1 when Dothan jumped offside.

They scored on 3rd-and-5 when White took a pitch on a reverse for a 21-yard touchdown run to the right side. Andrew Pickard, who converted 6-of-7 point after kicks, added the PAT to make it 7-0.

After three straight combined three-and-outs, the Wildcats took over the Dothan 40 following a 2-yard punt by the Wolves. Seven plays later, Griffin scored off the left side from a yard out on 3rd-and-1 to make it 14-0 with 8:05 to go in the second quarter.

Dothan’s offense found some life on the next series. Starting at their 44 after a 27-yard kick return by Tamarion Peterson, the Wolves moved into Wildcat territory behind a 26-yard run by Raymon Blackmon.

A few plays later, Dothan was faced with 4th-and-5 at the 30, but quarterback Javierre Jackson scrambled up the middle for 17 yards a first down. Three plays later, Blackmon scored on a 2-yard run off the right side. William McCarthy converted the extra-point kick to close the gap to 14-7 with 4:55 left in the half.

Enterprise struck back with a big play on the next series. Quarterback Quentin Hayes dropped back like he was about to pass, but instead handed it off to Johnson on a “Statue of Liberty” reverse play. Johnson took it to the left side and down the sideline for a 54-yard scoring run to boost the Wildcat lead to 21-7.

Enterprise continued the explosive runs in the second half as Griffin scored on a 38-yard run and Johnson on a 32-yarder on consecutive drives to help the Wildcats extend the margin to 35-7 early in the fourth quarter.

Dothan, in its best drive of the night, scored on an 11-play, 75-yard scoring march. Hard running up the middle by Braxton Fluellen sparked the drive as he ripped off runs of 9, 8 and 23 yards. Jackson followed with a 16 yard scramble.

Enterprise answered with two more scores on a 37-yard run by Johnson to convert 3rd-and-17 and a 13-yard run on 3rd-and-3 by Griffin to finish out the scoring.

Amare Griffin, wearing No. 4 in Friday’s game instead of his usual No. 3, scored three touchdowns for the Wildcats in the 48-14 victory against area rival Dothan.

Left: Mykel Johnson (22) also added three touchdowns for the ’Cats on runs of 54, 32 and 37 yards. In total, the Wildcat offense rushed for 431 yards with 13 of the 41 rushing plays going for 14 or more yards. Right: Enterprise’s defense held the Wolves to just 165 yards and six first downs, including 65 yards and two first downs in the opening half.

Enterprise held Dothan to 3-of-11 third down conversions, and forced three straight three-and-outs in the first half.