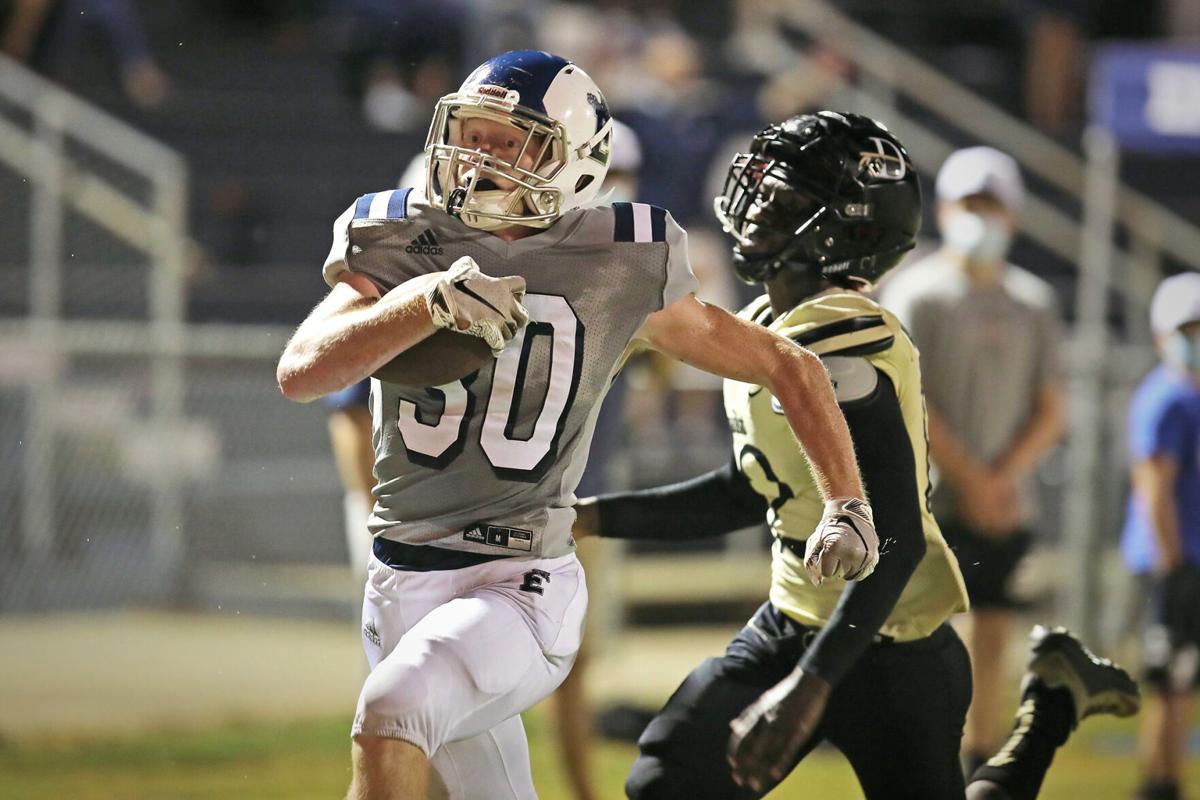 Enterprise receiver Cole Hooper races to the end zone after catching a pass from Quentin Hayes on a 62-yard touchdown play Friday night against Davidson. 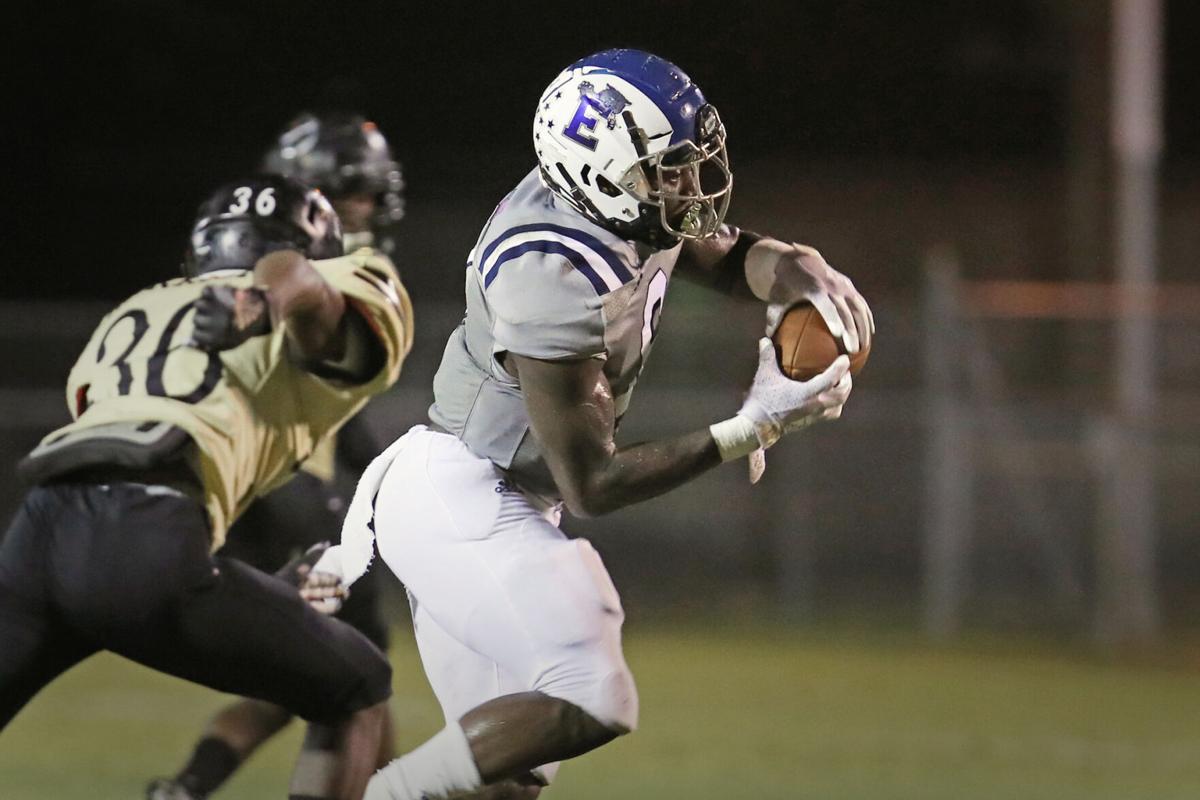 Enterprise's Josh McCray, shown here catching a pass over the middle, scored on a 42-yard run, a 90-yard kickoff return and added two 2-point conversions in Friday's victory over Davidson.

MOBILE – The Enterprise High School Wildcats scored early and often in the first half of Friday’s game against Davidson’s Warriors and cruised their way to a 52-13 win to improve to 3-0 on the season.

After winning the coin toss and going on defense to start the game, the Cats quickly forced the first of four Davidson punts in the first period.

Scrimmaging from its 45-yard line after a 33-yard punt, Enterprise scored on its second offensive snap when Sam Whittaker ran 18 yards for the game’s first score. The TD came after a 37-yard Josh McCray run. McCray ran for the 2-point conversion putting the Cats ahead to stay with 9:48 to play in the first quarter.

Some six minutes later after a short Warrior punt, the Cats used one play, a 32-yard pass from Quentin Hayes to Jared Smith, to notch a second touchdown. McCray again ran for the 2-point conversion with 3:15 left in the opening stanza with EHS ahead, 16-0.

Enterprise’s third touchdown came on a 42-yard reverse McCray took to the end zone. Hayes ran for the 2-point conversion putting the Cats ahead, 24-0, with 11:40 to play in the first half. The TD capped a 2-play, 69-yard drive.

Davidson then drove to Enterprise’s 31-yard line but was stymied on fourth down. Enterprise scored quickly when Hayes threw to Cole Hooper for a 62-yard touchdown.

Matthew Sheahan added the PAT increasing the EHS lead to 31-0 with 9:16 to play in the second period.

The Cats scored their last touchdown of the first half on a 78-yard pass completion from Hayes to Aiden White with 41 seconds remaining before intermission. Sheahan’s PAT put EHS ahead, 38-0, at the half.

Almost midway through the third quarter Davidson’s Johnathan Whitfield capped a five-play, 40-yard drive with a 10-yard touchdown run. After a missed PAT the score remained 38-6.

But not for long.

McCray grabbed Davidson’s kickoff at the EHS 10-yard line and, according to the scoreboard clock, covered 90 yards for a touchdown in six seconds. Sheahan’s PAT lifted the score to 45-6 with 7:19 left in the third period.

Less than a minute later, the Warriors scored on a 74-yard Jaylen Nash run. Jonah Delange added the PAT to conclude Davidson’s scoring, with the score 45-13.

Substituting liberally on both sides of the ball, the Cats racked up the game’s final touchdown on a 27-yard run by Mykel Johnson with 2:49 remaining in the game. Sheahan added the PAT lifting the score to its final 52-13.

On the night, Enterprise had 30 rushes for 224 yards and Hayes completed 5 of 7 passes for 190 yards. The Cats attempted only one pass in the second half.

Drake McDaniel recovered a Davidson fumble in the second period, the only lost fumble among the four suffered by the home team.

Enterprise lost three of its five fumbles and was penalized nine times for 95 yards while Davidson was flagged four times for 32 yards.

Enterprise’s win evened the series with Davidson at 3-3.

The Cats are scheduled to return to 7A Region 2 play Friday in Garrett-Harrison Stadium in Phenix City against the Central High Red Devils.

Cats eager to rebound against Carroll

An open date in the middle of the season is different for Kinston coach Rudy Free and the Bulldogs.

To Whom It May Concern:

Zack Holmes is more than ready to turn the page on last week’s 47-0 loss his New Brockton team suffered against Wicksburg.

Wildcats go back to work

It wasn’t for lack of effort that Enterprise suffered its first loss of the season last Friday night at Central-Phenix City.

New Brockton had a nightmarish start and never turned things around in a 47-0 loss to Wicksburg Friday night.

Kinston’s Addison Hudson ran for 256 yards and four touchdowns, but the Bulldogs couldn’t hold off Georgiana in the fourth quarter and lost 36…

Elba moves out of region play Friday night and plays host to Class 3A Providence Christian.

Enterprise receiver Cole Hooper races to the end zone after catching a pass from Quentin Hayes on a 62-yard touchdown play Friday night against Davidson.

Enterprise's Josh McCray, shown here catching a pass over the middle, scored on a 42-yard run, a 90-yard kickoff return and added two 2-point conversions in Friday's victory over Davidson.