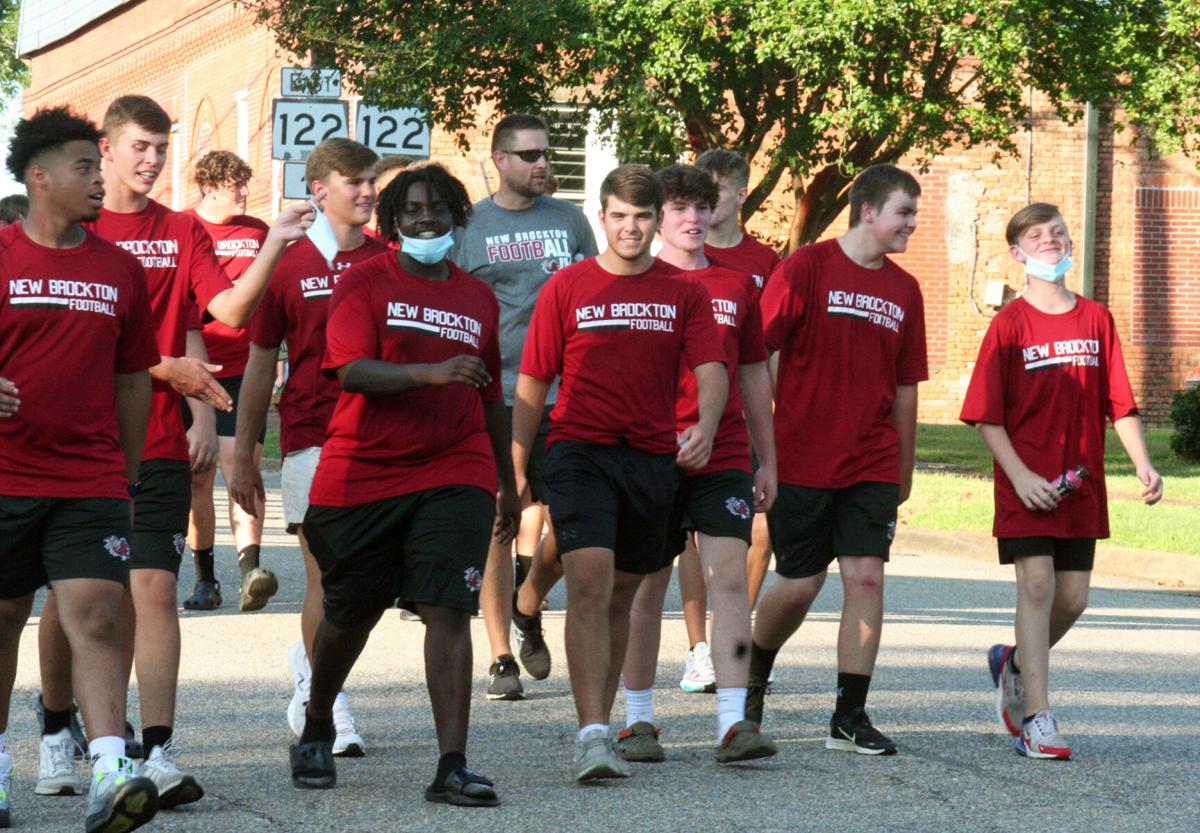 New Brockton athletes participated in a community-wide pep rally, Night of the Gamecock, last Friday on Main Street in anticipation of the first football game of the season tomorrow night. 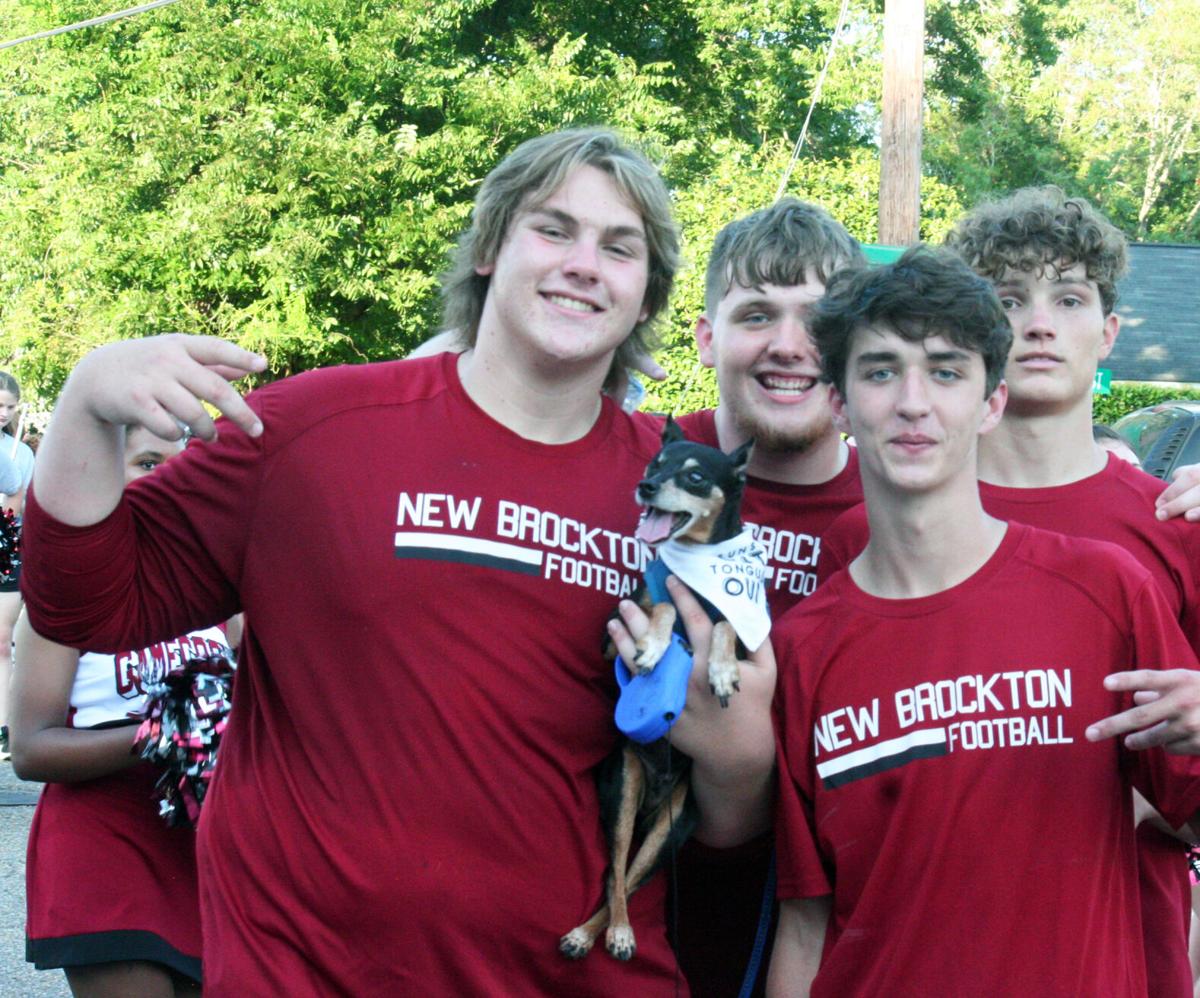 Several NBHS football players took a moment on their walk back to Gamecock Stadium to pose for a photo with their furry supporter. 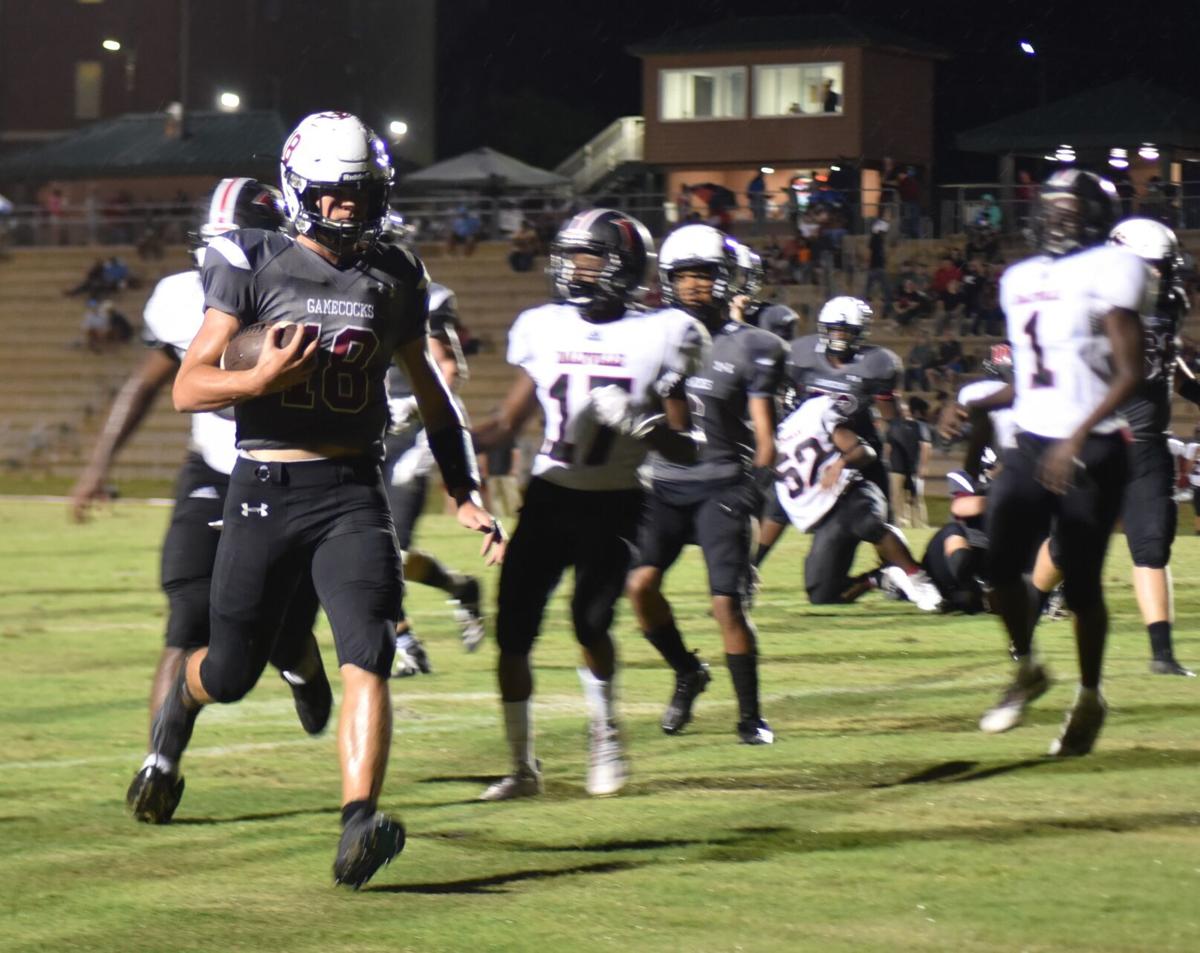 New Brockton senior quarterback Kaden Cupp scores on a 1-yard run late in the first half of a 2020 game against Daleville. New Brockton won 47-8.

As he prepares to take the field Friday for the first game of his third season as New Brockton’s head football coach, Zack Holmes said their main focus this season is to not take a moment for granted.

After uncertainty and the injury bug plagued the 2020 season, Holmes said the goal for his team this year is to just be grateful for what they have and to take it week by week.

“With everything still going on, you don’t know if you’ll be playing next week. Just being where our feet are and being in the moment, playing and taking it one week at a time is the plan,” he said. “Our goal is to be one and zero this week. Our focus is on Cottonwood.”

While the summer started out normal enough, COVID cases increased as August drew nearer and forced the team to be more guarded in their routine. Despite the hiccup at the end, Holmes said summer workouts were an overall success.

“Summer workouts were great, and it was obviously good to be back to some normalcy especially early on in the summer to get into a rhythm,” he said. “We had good attendance, and the kids worked really hard. Our JV kids showed up and did well, so across the board I felt really good about it.

“Most importantly, everyone stayed healthy. That was the main thing, keeping everyone healthy and feeling like we got better though the summer without losing anyone.”

With 12 seniors on the roster—and an even bigger junior class—and seven returning starters on both sides of the ball, there’s no shortage of capable leaders. Holmes said one of the big things they’ve worked on in the off season is sharpening their competitive edge, creating self-motivated players and developing a program everyone can be proud of.

“The one thing we’re trying to stress is making sure that everyone takes pride in being a New Brockton Gamecock and seeing that it’s special and that it’s a great opportunity. There are a lot of guys who have been New Brockton Gamecocks who have a great history, so we’ve been trying to get them to realize that they’re connected to that, and I feel like we’ve done a good job,” he said. “We’ve had multiple guys who’ve played here that have come and spoke to the team, including Enterprise State Community College President Matt Rodgers who shared his journey with cancer. He talked about his time playing at New Brockton and how that’s helping him right now.

At 7 p.m. Friday, the Gamecocks will take the field for the first time in their renovated stadium against Cottonwood. Each “home” game of the eight-game 2020 season was played at Enterprise’s Bates Memorial Stadium.

“We didn’t play a home game last year,” Holmes said. “Our home games were at Bates, which is awesome the city of Enterprise helped us with that, but we still had to put everything on a bus, drive over there and go set it up and tear it down. So it was like we played all away games, which is a big undertaking too.

“It was tough on us, but our kids are resilient. There are some blessings that came out of that and we all learned. The biggest thing is they appreciate the opportunity of having a chance to play, and play together.”

Players to watchThe Gamecock offense will be led this year by four-year starter Kaden Cupp, who averaged over 100 yards both rushing and passing last year. Holmes said he’ll also get playing time on the defense and special teams.

“He will have a huge impact. The offense will run through Kaden,” Holmes said. “He’ll be the main piece. This past season, he broke the career scrimmage yardage record for New Brockton and has kind of been a staple on the offense his entire career. He’s an extremely talented player who’s going to make a lot of plays for us this year, but his leadership and his maturity is what’s really grown and is what I’m excited about.”

Senior running backs Jamarcus Brown and Jordan Tacey are set to have a lot of playing time, and receivers Matt Smith and Brayson Carr have also gained the coach’s attention.

“We have a young guy named Matt Smith who is doing some really good things and catching the ball well,” Holmes said. “Last year because of COVID, we moved Brayson Carr, who was a back-up quarterback, to receiver and he’s been outstanding. He catches the ball really well and does a great job. He’s going to be good.”

“I expect all three of them to have a big impact on the defensive side,” he said. “(Andrew) kind of directs traffic and has everything going. He’s going to be a cog on our defense.”

New Brockton athletes participated in a community-wide pep rally, Night of the Gamecock, last Friday on Main Street in anticipation of the first football game of the season tomorrow night.

Several NBHS football players took a moment on their walk back to Gamecock Stadium to pose for a photo with their furry supporter.

New Brockton senior quarterback Kaden Cupp scores on a 1-yard run late in the first half of a 2020 game against Daleville. New Brockton won 47-8.