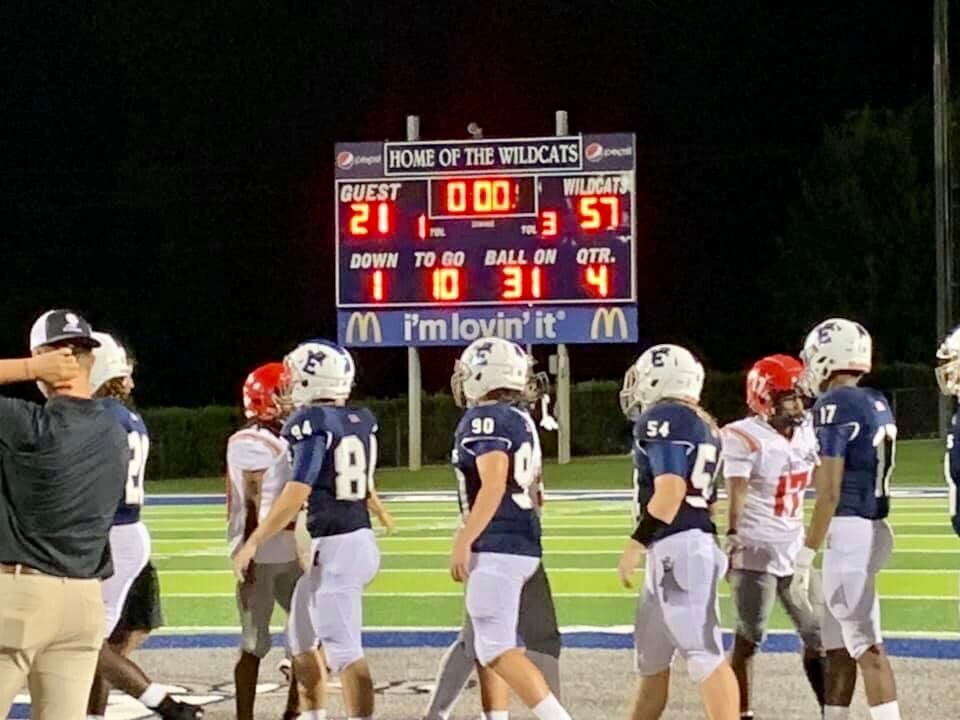 The Wildcats opened its 2021 football season with a dominating 57-21 victory Friday night against Bay High School, improving to 7-5 all time against the Tornadoes. 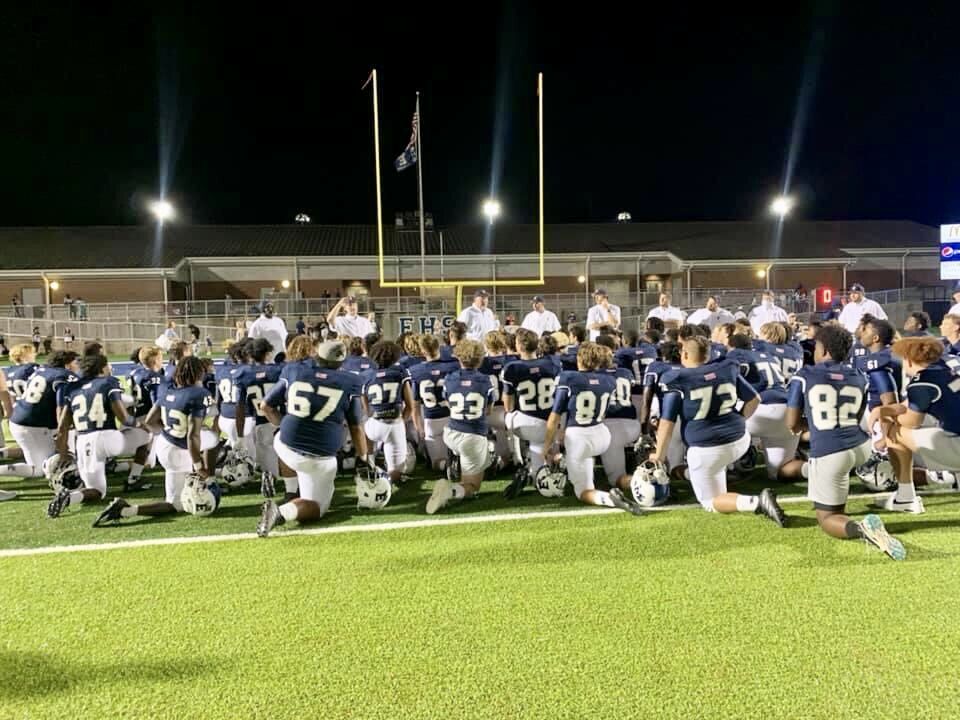 In the first half of Friday's game, the EHS offense produced 232 total yards, despite starting five of its six first-half possessions on Bay’s side of midfield. 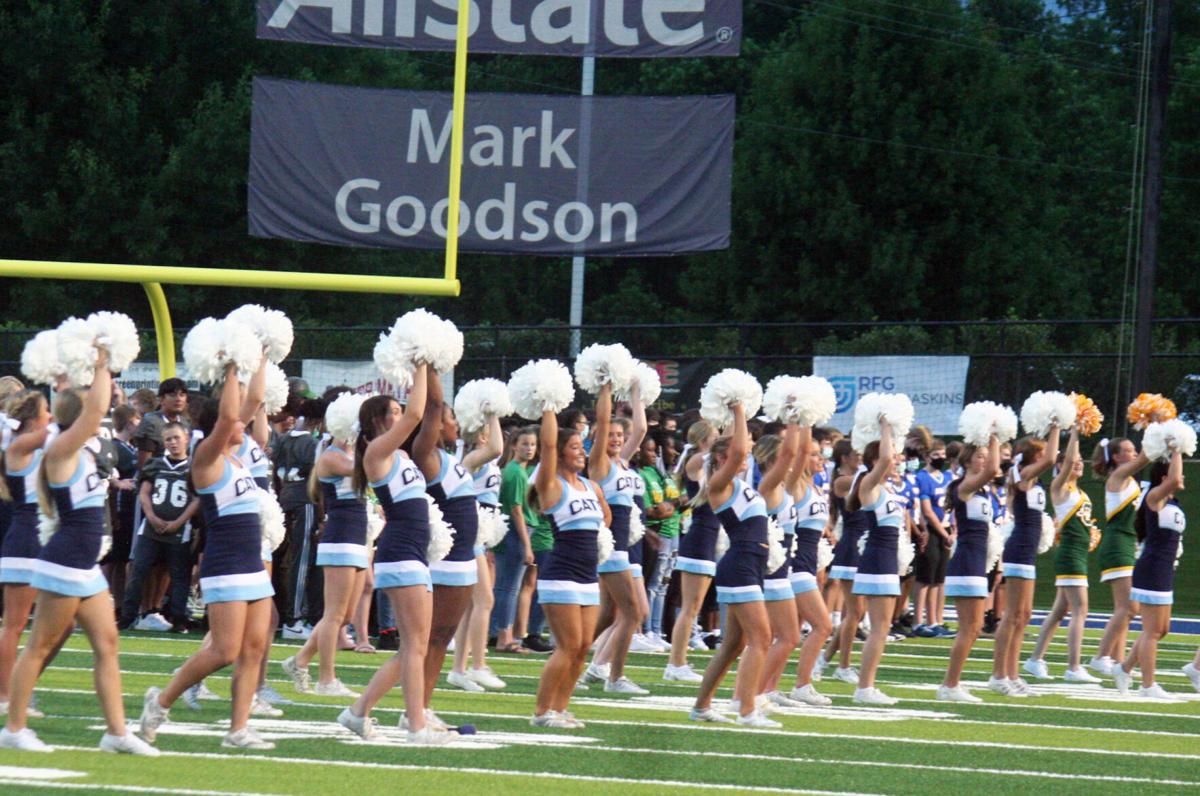 Cheerleaders from Enterprise, Coppinville and Dauphin revved up the crowed at a community pep rally held Thursday night at Wildcat Stadium.

For the 12th time since 1967, the Cats and Tornadoes tangled in a game of football, and on the strength of Enterprise’s 57-21 win, the Cats improved to 7-5 in the rivalry.

Oddly, Enterprise is 3-3 in games against Bay High played in the City of Progress, and miraculously, 4-2 in Bay’s Tommy Oliver Stadium.

Friday’s game began 10 minutes late after Bay High buses ran into heavy rain en route, but that had no impact on the game the Cats controlled from the get-go.

A missed two-point conversion left the score 6-0 with 11:06 left in the first period.

The lead quickly doubled after Marshawn Fitzpatrick intercepted another Bay pass and returned it to the visitor’s 15-yard line.

Two plays and a couple of penalties later, Wyatt Darlington threw to Mykel Johnson for 23 yards and a second EHS touchdown; Johnson streaked into the end zone with the 2-point conversion, lifting the Cats to a 14-0 lead with 8:35 to play in the first quarter.

On the visitor’s next series, Enterprise defenders forced a Bay High punt the Cats put in play at their 39.

Three plays later, Griffin ran 15 yards for the score and Andrew Pickard’s PAT improved the home team’s lead to 21-0 with 3:38 remaining in the opening stanza.

Bay’s next possession ended with a blocked punt, credited to Enterprise’s Jackson Blount, giving the Cats the ball at the visitor’s 19-yard line.

Four snaps later, Griffin dashed 8 yards into the end zone with 10 seconds to play in the first quarter. Pickard added the PAT for a 28-0 lead that proved to be enough points for the win.

Enterprise scored two touchdowns in the second quarter, the first on a 15-yard dash by Sam Whitaker, the second on a 6-yard run by Johnson. Pickard added both conversions putting the Cats ahead 42-0 at intermission.

Bay had one first down in the first half, 55 yards of total offense and didn’t cross midfield on the synthetic surface.

The EHS offensive produced 232 total yards, despite starting five of its six first-half possessions on Bay’s side of midfield.

Enterprise’s Griffin opened the second half with a 65-yard kickoff return to the visitor’s 35-yard line, but the Cats were unable to score, breaking the string of scoring every possession.

The Cats starting offense didn’t play in the second half, but Bay High’s did and registered its first score on an 84-yard drive capped by a 21-yard touchdown pass from Will Smiley to Jayshawn Connerly with 4:08 left in the third period. Chappell Syfrett added the PAT making it 42-7, Enterprise leading.

Bay got its second touchdown, driving primarily against reserve EHS defenders, on a 20-yard pass from Smiley to Mike Johnson; Syfrett’s PAT cut the lead to 42-14 with 11:51 remaining in the game.

Enterprise’s reserve offensive unit answered with a scoring drive that covered 80 yards in 11 plays and ended when Raymond McGoley slashed through Bay defenders for 18 yards and a touchdown.

A bobbled snap on the conversion attempt was picked up by quarterback Quentin Hayes who, on his only carry of the game, ran for the 2-point conversion putting EHS ahead 50-14 with 6:37 to play.

Bay answered when Smiley threw a 24-yard scoring pass to Jeremiah Banks with 2:51 left in the game; Syfrett’s PAT brought the score to 50-21.

On its final possession, Enterprise covered 56 yards in five plays with the touchdown coming on a 48-yard pass completion from freshman Tomorris Green to Josiah Soles; Pickard’s PAT ended scoring at 57-21.

Marzavious Reed had a fumble recovery for the Cats, and wide receiver Jadell Presley recovered a teammate’s fumble in progress and finished a 62-yard run that ended at Bay’s 9-yard line setting up the third TD in the first quarter.

The Cats are scheduled to entertain the Carver High Wolverines Friday in Wildcat Stadium at 7 p.m.

Enterprise leads the all-time series against the former region opponent 16-1-0.

The Wildcats opened its 2021 football season with a dominating 57-21 victory Friday night against Bay High School, improving to 7-5 all time against the Tornadoes.

In the first half of Friday's game, the EHS offense produced 232 total yards, despite starting five of its six first-half possessions on Bay’s side of midfield.

Cheerleaders from Enterprise, Coppinville and Dauphin revved up the crowed at a community pep rally held Thursday night at Wildcat Stadium.