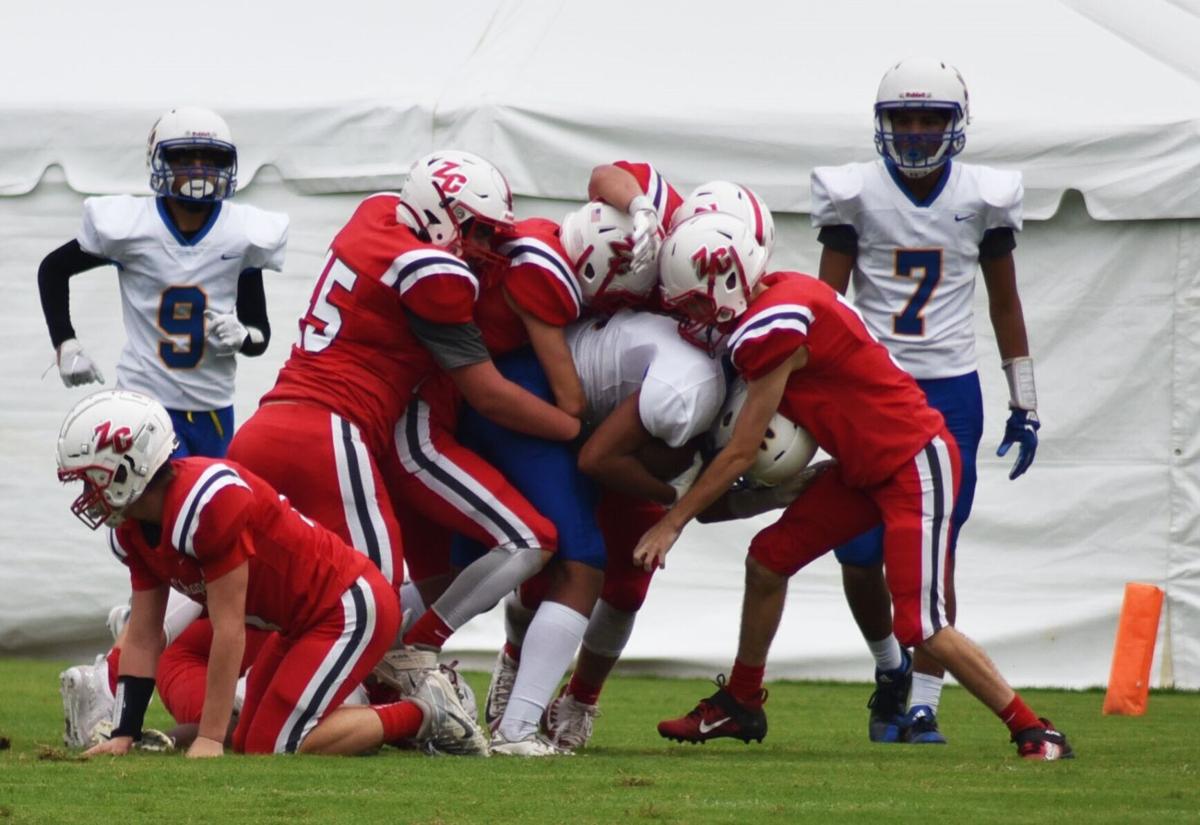 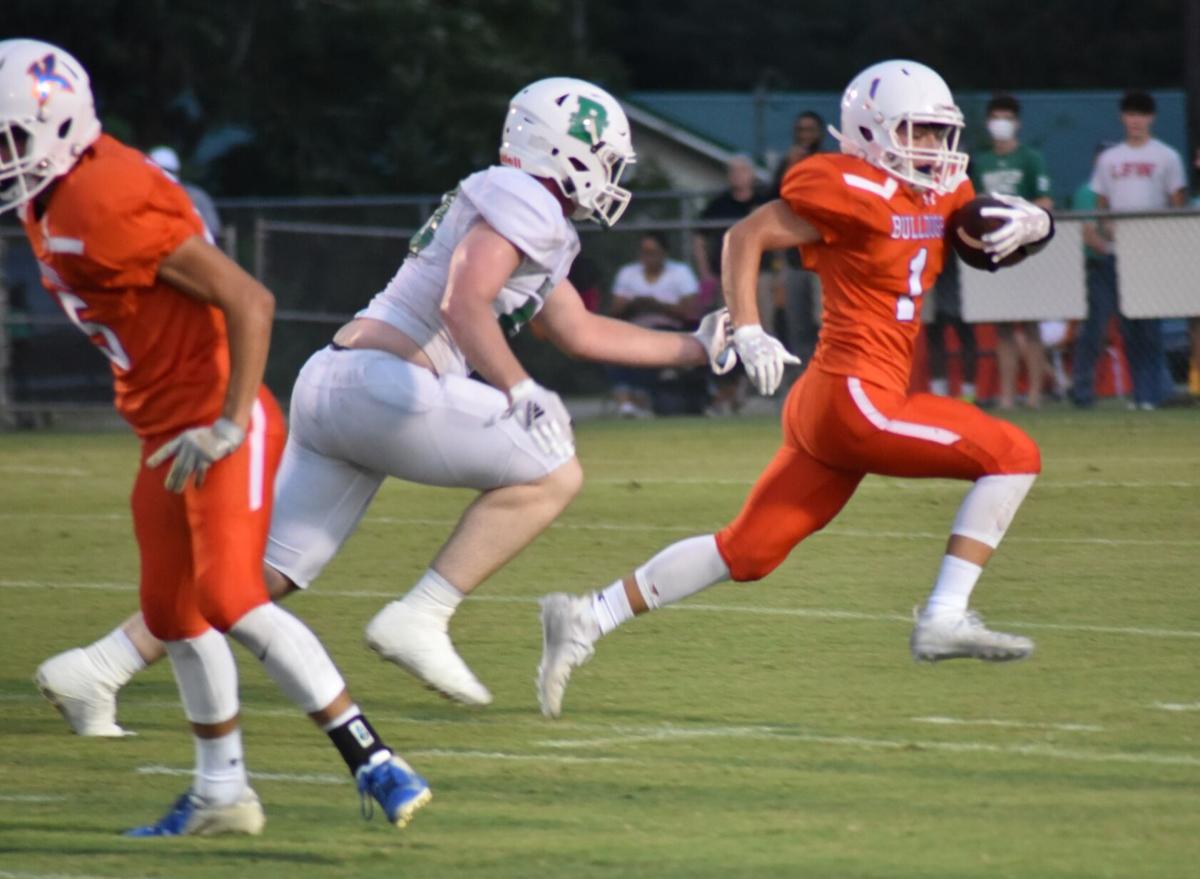 Kinston junior Jeb Crosby (1) tries to elude a Brantley defender during a game last season against Brantley. Crosby played quarterback most of last season but will now be expected to carry the workload in the backfield.

After its jamboree was canceled last Friday due to COVID, Zion Chapel takes the field for the first game of the 2021 season tonight against the Kinston Bulldogs, who are looking to rebound from last week’s 42-19 loss to Houston Academy.

“I feel pretty good right now in that everything has been pretty much back to normal,” said Bryant, speaking at mid-July Media Coaches Day event. “We’ve been in the weight room and done everything like we have done in the past and feel like we’re on the right path again to be back to where we were.”

Part of getting back on track is having a successful summer workout program, and Bryant said this summer’s program was one of the best attended to date.

“We had a great summer. I was very pleased with our attendance and how the kids responded to whatever we threw at them,” he said. “I think we’ve improved in a lot of areas as a team; we’ve worked on every facet of the game, so I feel like we’ve really improved in all areas. Obviously we need some experience with these guys, and that means getting out on Friday nights under the lights.”

Despite having just four seniors on the roster—two returning from last season, one returning after playing early in his high school career and one new player—Bryant said he expects to see a lot of leadership come from these four young men.

“We had a big senior class last year, and we weren’t really sure what the senior class was going to look like this year. The two we added should have been playing all along, but we’re excited to have them,” he said. “One of the two that just joined played earlier in his high school career and just came back, so I expect huge things from him and all four of the seniors. The other two have been with us forever and know what we do and what we expect, so we’re looking forward to seeing their leadership shine through this year.”

Players to watchSenior Paden Boothe, joined by juniors Shaun Smith, Conner Stricklin, Hayden Walden and Tristan Huggins, are anticipated to be the driving factor on both sides of the ball.

“There are a lot of starts there amongst the group,” Bryant said. “We really hope they will be the driving factor for our team this year. Most of these guys will start both ways for us. It’s going to help on offense and defense.”

Though just a sophomore, Mason Stuart will be counted on to lead the way at quarterback, a position that was a sore subject all of last season.

“He’s just a competitor. He’s an athlete,” Bryant said. “He plays basketball, plays baseball – just an all-around athlete. I think he’s going to be able to make some plays with his legs and with his arm. Again, being the competitor – nothing stops him. That’s what is special about him, I think.”

Stuart has been part of Bryant’s system for several years now and gained valuable experience practicing alongside the varsity team as a member of the JV club.

“Our program has been basically the same for the past five years, which is a big thing with consistency. He’s (Stuart) been around for several years now and has a really good grasp of what we’re trying to do,” Bryant said. “We’re going to try our best not to play him as much on defense, but with him being the athlete that he is, sometimes you’re just going to have to.”

Brady Cobb, Brayden Watson, Bradon Grantham and Layton Grantham will all be targets for Stuart, and Zay Adair is also a skilled player that can be utilized in multiple ways on offense.

“Boothe and Adair, both of these guys have been starters for four years,” Bryant said. “Shaun Smith is an inside linebacker that brings a lot of experience. Jackson Adcock – I really expect him to have a big year. I just think he’s progressed phenomenally in the last few years.”

The punting and snapping duties are still a neck and neck race, says Bryant. Stuart and Bradon Grantham are battling for the punting job, while Boothe and Watson are vying for the starting job as snapper. The kickoff duties are also to be determined.

Zion lost to Kinston in the opening game last year 26-40 and went 1-9 with the lone win coming in game 10 against Pleasant Home 41-14. Bryant said his guys are ready to get back on the field and show what they can do.

“I think our team is very hungry and ready to get that taste out of our mouth from last year,” Bryant said. “It was a very trying year, but we kept fighting all the way to the end. Our kids are ready to get back on the field and compete.”

After losing their season opener last Friday, the Kinston Bulldogs hope to squash the Rebels’ dreams of a rematch.

Entering his third year as head coach, Rudy Free has a good feeling about the veteran-heavy team. With nearly 20 seniors and juniors, they bring a good mix of experience in different positions.

“We’re fairly strong. We’ve got a good mix of offensive linemen, where sometimes in the past we’ve had one or the other,” Free said. “I think some of those younger kids – a bunch of those juniors – have had some playing time and experience that I think it’s going to help us a lot.”

While the Bulldogs had to replace star running back Addison Hudson, who signed with Faulkner University after his senior season, they’ve also moved a few players around on the offensive side. Junior Jeb Crosby, who played quarterback most of last season, will now be expected to carry the workload in the backfield while junior Cale Sumblin takes reps as quarterback after playing much of last year as tight end.

“(Crosby) has gotten a lot bigger. He’s probably put on about 10 or 15 pounds, and he’s pretty steady. You know what you’re going to get with him,” Free said. “He did a good job for us last year where we were real run heavy. He and Konner Walker are going to split time at running back. Konner is a kid that last year had never played running back at all. He had some really good games for us and filled in for Addison, who was the main ball carrier. Both of those guys have to carry the load for us.

“Cale is a three-sport guy,” Free said. “He plays a little bit of everything. He pitches on the baseball team. In basketball he’s a post player and is really good. He’s got a really good arm. Mentally, he’s starting to understand what defenses are trying to do and where he’s trying to go with the ball and I think that’s a big key. We’ve worked hard on the passing game this summer, because that’s something we really struggled with last year. We’re just trying to be a little more balanced on offense. We’ve still got to run the ball, but I want to be able to throw it at times and get some people out of the box.”

At 6’4, Submlin will also get some reps as a linebacker.

“He gets in passing lanes and is big enough to take on some blocks,” Free said. “He’s just a good, overall athlete.”

Last Friday against HA, Sumblin ran for 67 yards on 15 carries and scored a touchdown. He also passed for 91 yards, completing 8 of 16, with a TD pass to Crosby, who had four catches for 58 yards.

Other players who could be playmakers include JW Mikel at wide receiver, Caden Dean at tight end, Jack Perry at fullback and Dylan Davis and Blake Senn at wingbacks.

“We lost three guys last year that really did a good job for us,” Free said. “But the good thing about it is the guys who are replacing them got experience. Caden and Connor played a lot last year. Jackson has got to step up and come in and replace Jaken Davis, who had been the center the last two years.”

CJ Lunsford, Dalton Smith and Senn are expected to vie for playing time in the secondary and Walker will see action at defensive end.

Another name to keep an eye on is Reese Hall, who is vying for playing time at receiver and outside linebacker. He and Smith are new additions to the team.

“Reese is probably about 6-2, about 185,” Free said. “He’s a basketball guy that came out this spring. Dalton has never played. He’s about 5-8, 150. Both of those guys have done a good job and may get a good bit of playing time. I’m just trying to figure out what they can and can’t do in a game situation.

“And Drew Conner (WR/RB/LB) didn’t play a whole lot last year, but he’s put on some weight and really gotten stronger. I think he’s going to be able to play a lot for us and give us a little depth.”

Jon Johnson, sports editor at The Dothan Eagle, contributed to this report.

Kinston junior Jeb Crosby (1) tries to elude a Brantley defender during a game last season against Brantley. Crosby played quarterback most of last season but will now be expected to carry the workload in the backfield.