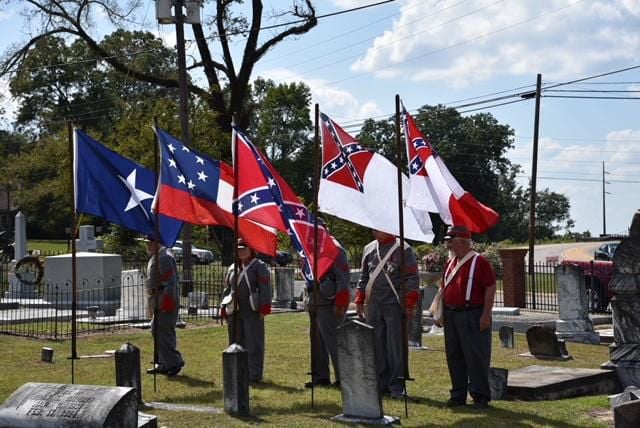 A grave marker to replace a previously fallen one was erected on Grubbs' grave site.

His original head stone had fallen. A new stone was replaced by the U.S. Department of Veteran Affairs.

The service was conducted by Donna Clark, the UDC Henry D. Clayton District Director and a member of the General Edmond Winchester Rucker UDC chapter in Enterprise. The invocation and benediction were given by John Phil McLaney, Jr. The posting of the flags was performed by the Confederate reenactor group called the “McRae’s Flying Artillery” from Luverne, formerly known as “Clanton’s Battery”.

Gun and cannon salute and the playing of “taps” were provided by the “McRae’s Flying Artillery”.  A reception in the church fellowship hall was immediately following the service. The reception food was provided by all the UDC chapter ladies in attendance.

John Tillman Grubbs was born Sept. 7, 1823 to Winford Grubbs and Mary Ann Cadenhead in Jackson County, Texas. He was the grandson of William Adam Grubbs of Barbour County.

John Grubbs was a farmer by profession in Louisville. He joined the Alabama Confederate cause on March 23, 1861 at Barrancas, Florida under Colonel Henry Delmar Clayton, from Clayton, Alabama for 12 months as a private, serving in Company F of the Alabama 1st Infantry.

At the end of his one year of service, the group re-organized and he re-enlisted on Feb. 10, 1862 in Clayton, Alabama under Captain Williams for 3 years.

He was captured at Port Hudson, La and sent to Camp Douglas, Illinois and released and rejoined General Johnson’s troops in Mississippi.  He was paroled May 1, 1865 under General Joseph E. Johnson to Major General W. T. Sherman in North Carolina.

Grubbs was one of the fortunate soldiers to return home to his family in Barbour County, as many never returned.

Upon returning home, Grubbs married Ellen C. Low in 1866, to this marriage no children were born.  She is buried at Pea Creek Baptist Church Cemetery. Grubbs’ later married Emma C. Smart, but again had no children. She is buried beside Grubbs in the Louisville Cemetery.

A grave marker to replace a previously fallen one was erected on Grubbs' grave site.