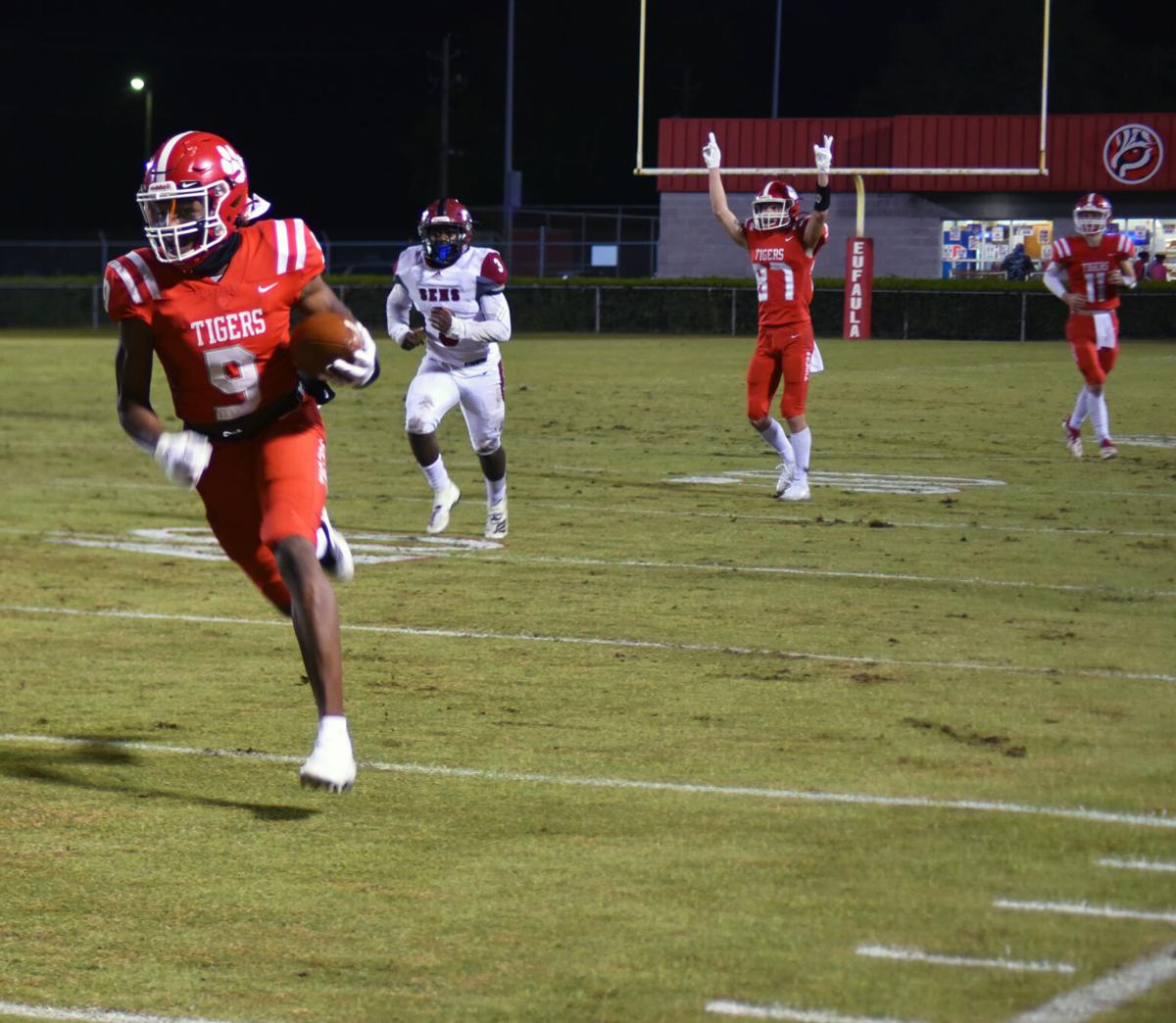 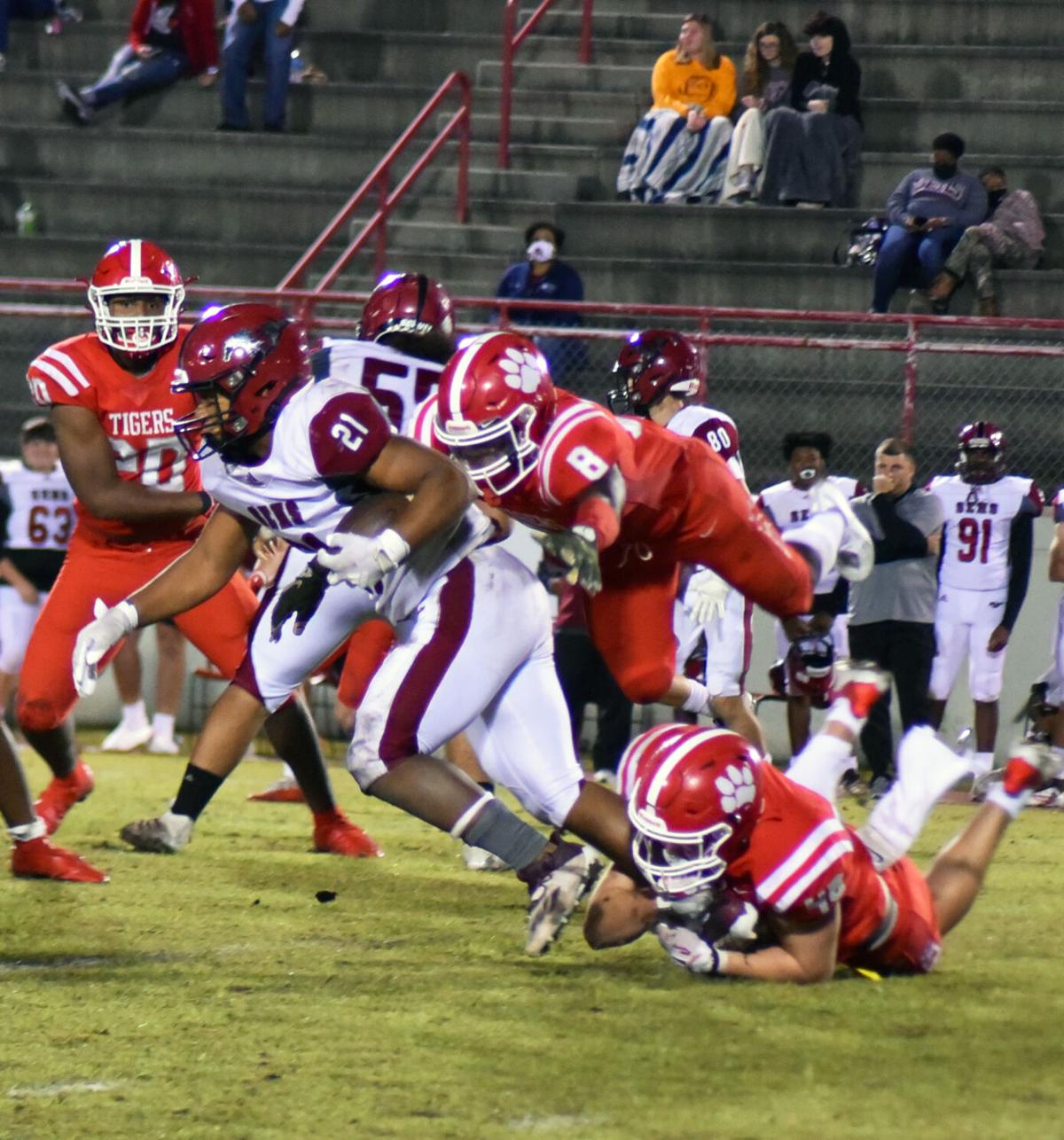 No. 8 Xavier Peterson makes a leaping tackle on Stanhope's No. 21. 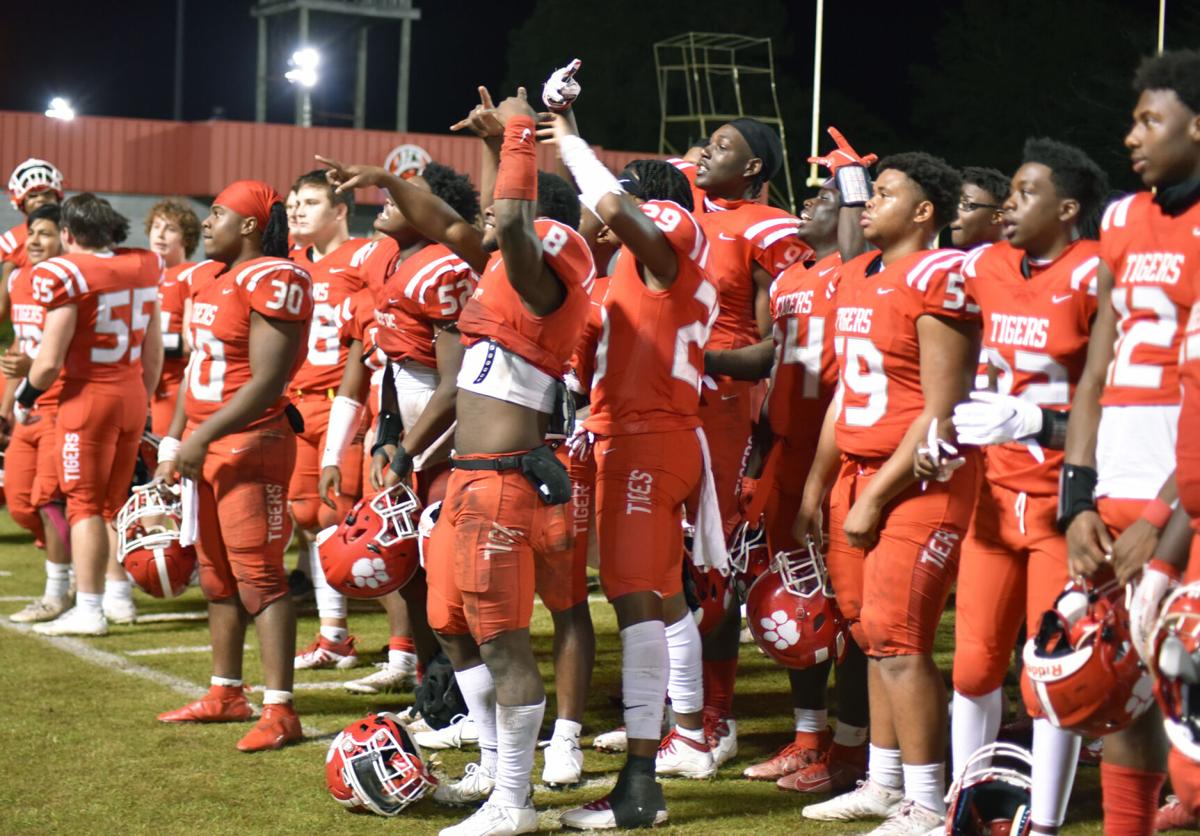 The Tiger football team had a tremendous season, going 8-2 in regular season play, 5-2 in area, hosted and won the first round of the playoffs and made a good comeback effort on the road in round two. So far, 9 players have received scholarships to continue their athletic and academic careers. Pictured are the players celebrating with fans after defeating Stanhope Elmore 52-28 in the first playoff game.

After getting off to a rocky start, the Eufaula Tigers routed the Stanhope Elmore Mustangs 52-28 victory in the first round of the 6A AHSAA playoffs.

This Friday, head coach Ed Rigby and the Tigers (9-2) travel to Eight Mile, Ala. to take on the Mattie Thomas Blount High School Leopards (6-3) in round 2. Blount defeated Hueytown on the road 30-24 in the first round.

For last Friday's game, senior quarterback Hess Horne was named Player of the Game after throwing for 284 yards and four touchdowns. Junior wide receiver Jamarian Lewis, who also plays quarterback, ran for 181 rush yards on nine carries and scored two rushing touchdowns and two touchdowns on passes from Horne. Rod Thomas, a senior wide receiver, had five receptions for 105 yards and one touchdown.

Also joining in with a touchdown each was junior defensive end Rashon Johnson and senior Emmanual Stevenson.

Eufaula got the ball to start the game and the drive ended with a blocked punt, but the Tiger defense stepped up to force a Stanhope three and out. After a promising start to the Tigers’ second possession, including a 27-yard pass from Horne to Thomas and a 45-yard pass to Jay’juan Townsend, the drive ended with an interception on the 6-yard line that led to the first score with 6:15 left in the first quarter.

After a series of punts by both Eufaula and Stanhope, the Tiger defense scored a safety, and the offense followed with a 45-yard touchdown pass to Thomas on second and seven with 53 seconds left in the first to bring the score to 9-7.

The Mustangs took advantage of a second blocked punt to score on a fourth down run at the start of the second quarter, but the Tigers answered with a long drive a touchdown from Johnson to lead 17-14.

Lewis scored on a 70-yard run to give Eufaula a two-score lead at the half.

Stanhope scored on its opening drive, an 80-yard play on first down. From then on, however, it was all Tigers.

Horne found Stevenson on a 29-yard touchdown pass on second and 31; the drive was helped along thanks to a long pass to Thomas and a personal foul penalty against Stanhope that ended with an ejection.

After another series of punts and an expo in pass defense, rush defense and tackles for losses, Lewis opened the fourth quarter with a 59-yard touchdown run and a 26-yard touchdown reception less than 50 seconds later. Stanhope went three and out on its next possession, and Lewis scored on another long touchdown run to make the score 52-21 with 6:38 remaining.

Stanhope scored for the last time with 1:23 remaining.

The Tigers ended the night with 499 total yards of offense while the defense held Stanhope to just 303 total yards.

The Eufaula Police Department made the following arrests from Feb. 19 through Feb. 21:

The following arrests were made by the Barbour County Sheriff’s Office from Jan. 28 through Feb. 7

Eufaula Police are continuing their investigation of a Friday night shooting that resulted in the death of a Eufaula man, according to a Monda…

A look at some of the things I have lost

Well, I’ve gone and done it again. I’ve lost my keys. They have been AWOL for two weeks now. I’ve even had new keys cut; I thought surely that…

The following arrests were made by the Eufaula Police Department from Feb. 4 through Feb. 11:

Birge wins knockout round at REDCREST 2021, advances to Friday’s championship round

Zack Birge of Blanchard, Oklahoma, weighed in eight bass totaling 25 pounds, 14 ounces Wednesday to win the Knockout Round (Group A) on Day 3 …

No. 8 Xavier Peterson makes a leaping tackle on Stanhope's No. 21.

The Tiger football team had a tremendous season, going 8-2 in regular season play, 5-2 in area, hosted and won the first round of the playoffs and made a good comeback effort on the road in round two. So far, 9 players have received scholarships to continue their athletic and academic careers. Pictured are the players celebrating with fans after defeating Stanhope Elmore 52-28 in the first playoff game.