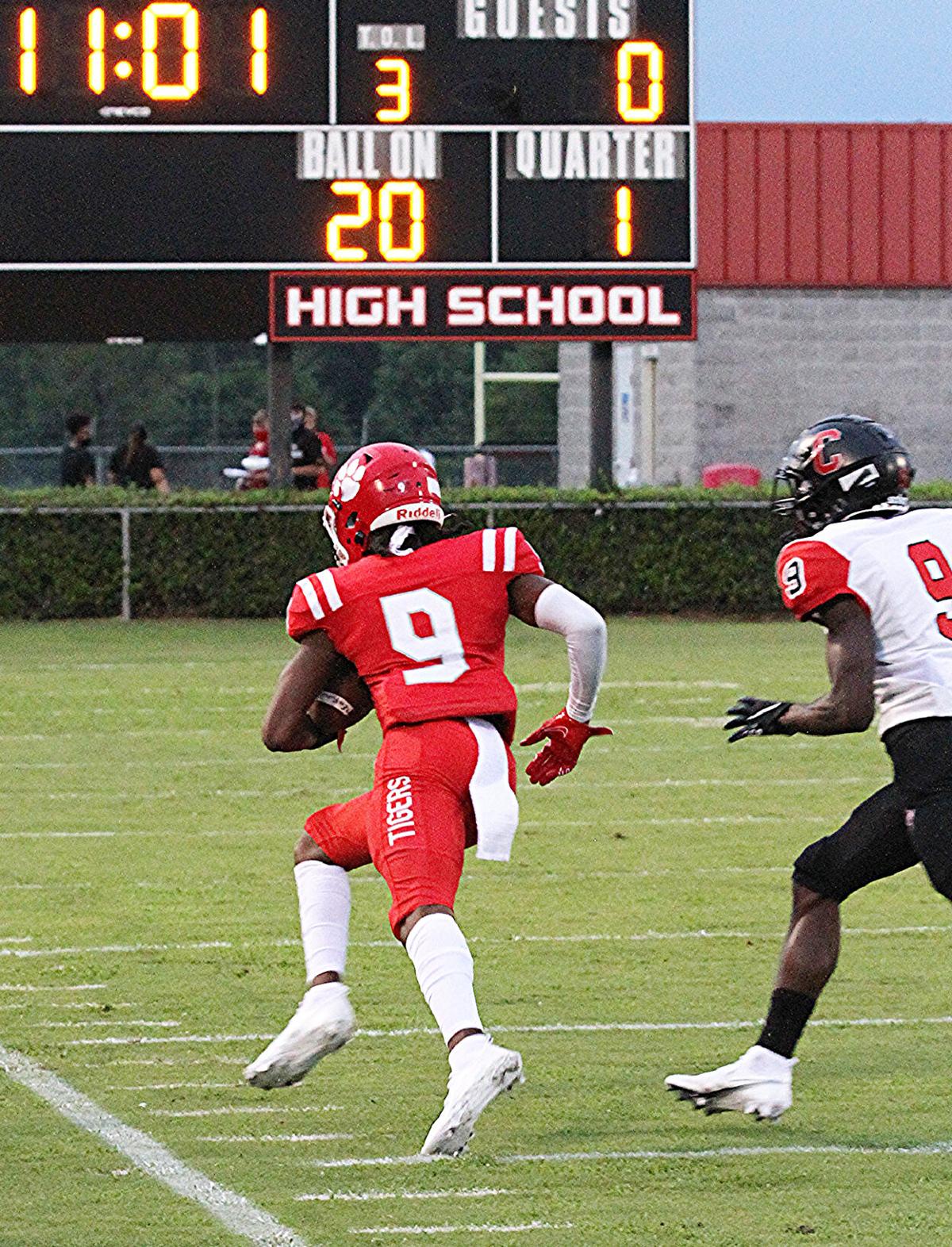 Eufaula’s Rah Rah Thomas (9) sprints down the sideline after a first-quarter catch against Central. 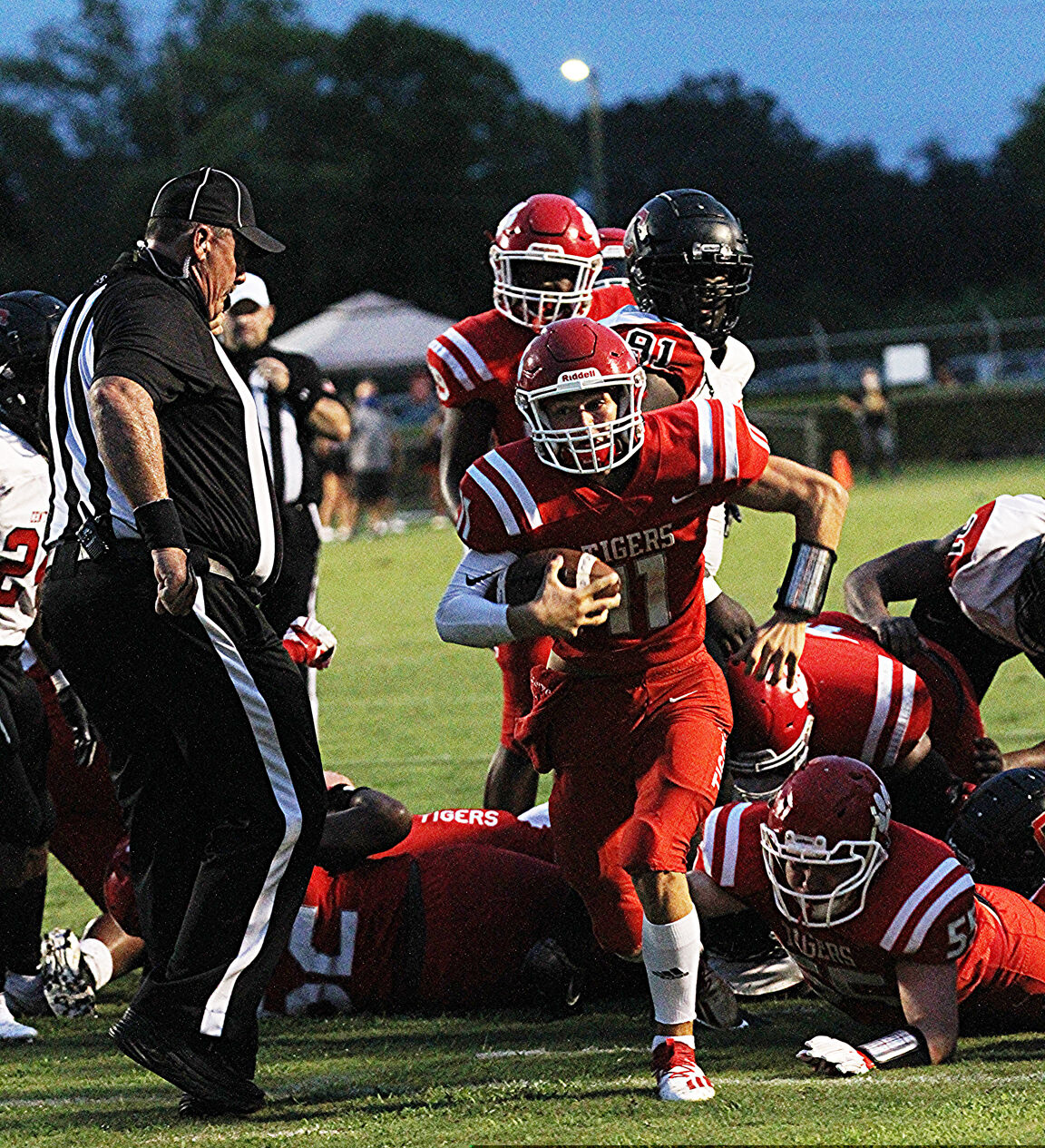 EHS quarterback Hess Horne breaks away from the pileup for an 11-yard touchdown run for the game’s first score. 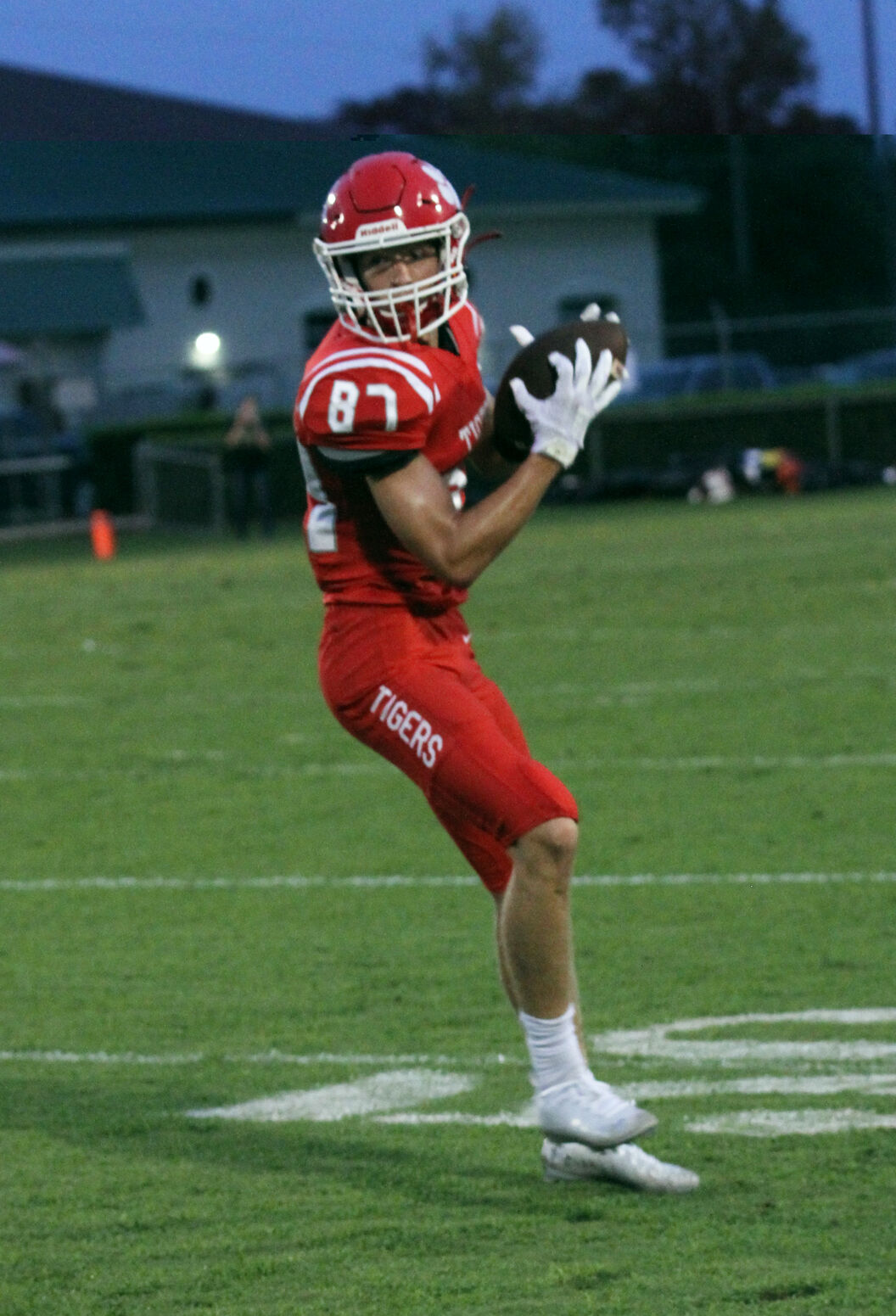 Ethan Black hauls in one of his five receptions for Eufaula. 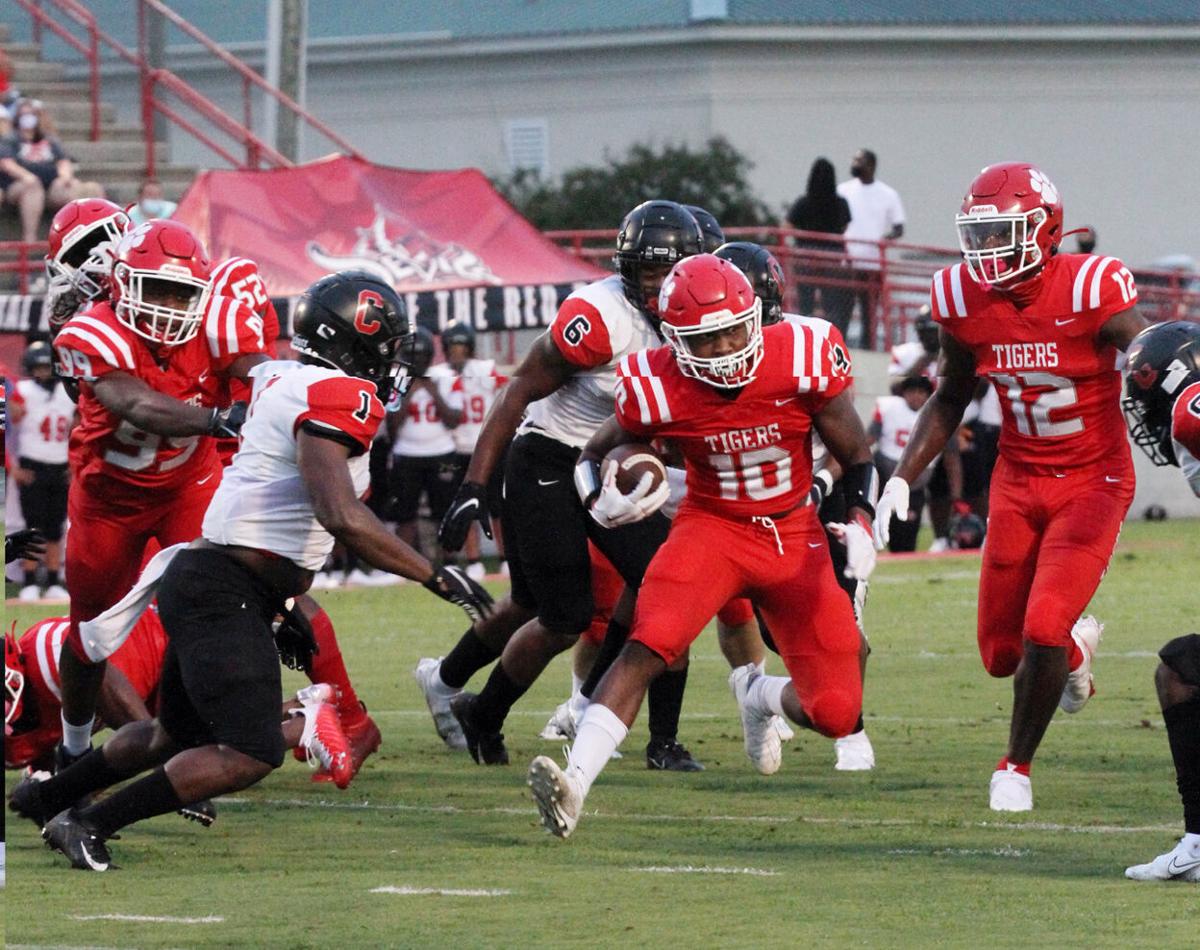 Jamarian Lewis (10) picked up some crucial yards on the ground for the Tigers.

Trailing for the first time all night, Eufaula found itself facing a third-and-6 at its own 30 with just 2:00 on the clock. The opponent was the mighty Central High Red Devils of Phenix City, a team two years ago that went 14-0 and bludgeoned Thompson in the Class 7A title game, 52-7. Last year, Central lost in the 7A finals.

But on this Friday night at Tiger Stadium there was something in the air more than just a steady mist. Social distancing and masks were requested by State Health Officer Scott Harris. Eufaula receiver Rah Rah Thomas made him proud.

Thomas separated nicely from Central-Phenix City defenders, sprinting down the sideline and hauling in a perfectly placed pass from EHS quarterback Hess Horne at the Central 41. By the time the ball was secured it was apparent no Red Devil would catch Thomas, who sprinted the rest of the way for a go-ahead touchdown with 1:50 remaining, one that would hold up as the Tigers pulled off the 38-36 upset of Central.

The victory moved Ed Rigby‘s Tigers to 2-0 on the season while Patrick Nix dropped to 0-2 in his debut season at Central.

Central only led for 50 seconds the entire night after taking a 36-32 lead with 2:40 remaining.

Actually, Central appeared to jump on Eufaula early when, on its first drive of the evening that began in Eufaula territory thanks to two over-the-head snaps, the Red Devils faced a second-and-goal at the EHS 6. Quarterback Caleb Nix, son of the head coach at younger brother to Auburn quarterback Bo Nix, completed a short pass to star receiver Jackson Meeks, who has multiple top-tier Division I offers. Meeks appeared head for paydirt when EHS senior linebacker Daniel Clayton hit him from the side inside the 1, separating the ball. Tiger defender Rashon Johnson recovered in the end zone for a touchback.

The Tigers scored first with 1:41 left in the opening frame when Horne broke out of a pack on a quarterback sneak from 11 yards out. Ethan Black came up big on the drive for EHS with three catches for 47 yards.

Horne found Jay Townsend on a 24-yard touchdown across the middle, and Jamarian Lewis’ two-point run made it 14-0 with 8:10 left in the half.

Central cut the deficit to 14-7 at the half on a 43-yard run by Joseph McKay.

The Red Devils tied the game at 14-14 just four plays into the second half, but Eufaula scored two times within four plays later in the period.

First, Eufaula got a 1-yard TD run from Horne, then the Tigers got a 42-yard interception return by Keith Bain for a 26-14 lead with 3:18 left in the third quarter. Bain stepped in front of a Central defender and raced untouched to the end zone.

Central rallied, first on a fourth-down, 10-yard TD pass from Nix to Meeks and then on a 3-yard run by Isaiah Biggs with 2:40 left.

After two plays netted just 4 yards for Eufaula, Horne placed a perfect pass down the left side line for a runaway Thomas, hitting him in stride at the Eufaula 41 and he ran untouched the rest of the way for a 38-36 lead with 1:50 left.

Central began its final drive at its own 44 and reached the Tigers’ 36 after a 22-yard scramble by Nix.

Offsetting interference penalties were followed by four consecutive incompletions by Nix as Eufaula captured one of its biggest wins in school history over the 7A Red Devils.

Horne finished 19-of-32 passing for 302 yards and three touchdowns. Thomas hailed in six of those passes for 151 yards.

Lewis paced the Tigers’ running attack with 69 yards on 12 attempts.

Meeks had all nine receptions for Central for 135 yards. McKay had 119 yards rushing for the Red Devils.

Eufaula has moved up to No. 8 in the recent state high school power poll by al.com, which is third among Class 6A schools.

Eufaula’s Rah Rah Thomas (9) sprints down the sideline after a first-quarter catch against Central.

EHS quarterback Hess Horne breaks away from the pileup for an 11-yard touchdown run for the game’s first score.

Ethan Black hauls in one of his five receptions for Eufaula.

Jamarian Lewis (10) picked up some crucial yards on the ground for the Tigers.