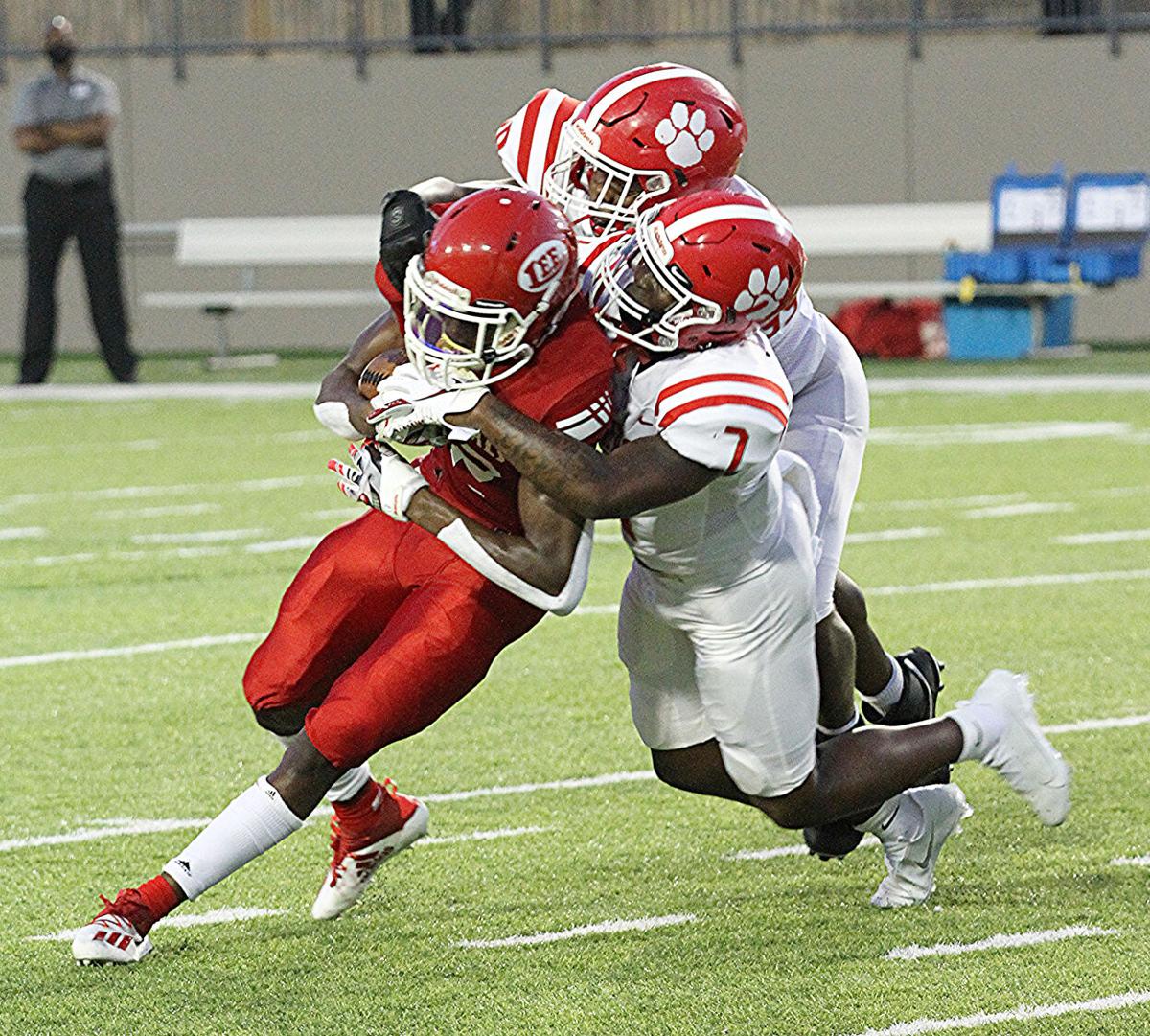 Eufaula’s Rashon Johnson (99) and Zadan Thomas corral Lee’s Reggie Davis on this play, but the Generals’ running back ran for 301 yards against the Tigers. 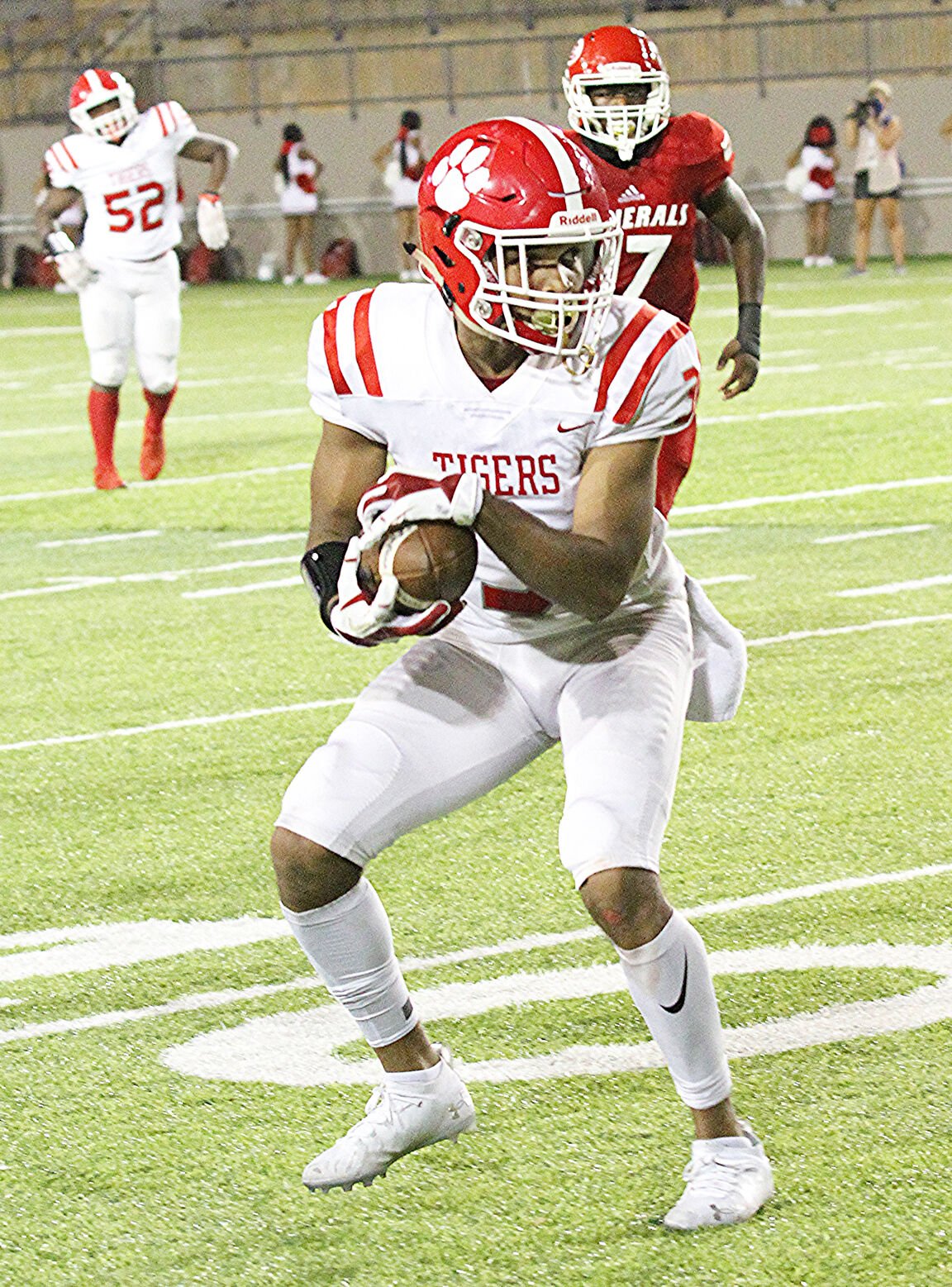 Jay Townsend hauls in one of five catches for Eufaula before looking for running room Thursday night at Cramton Bowl. 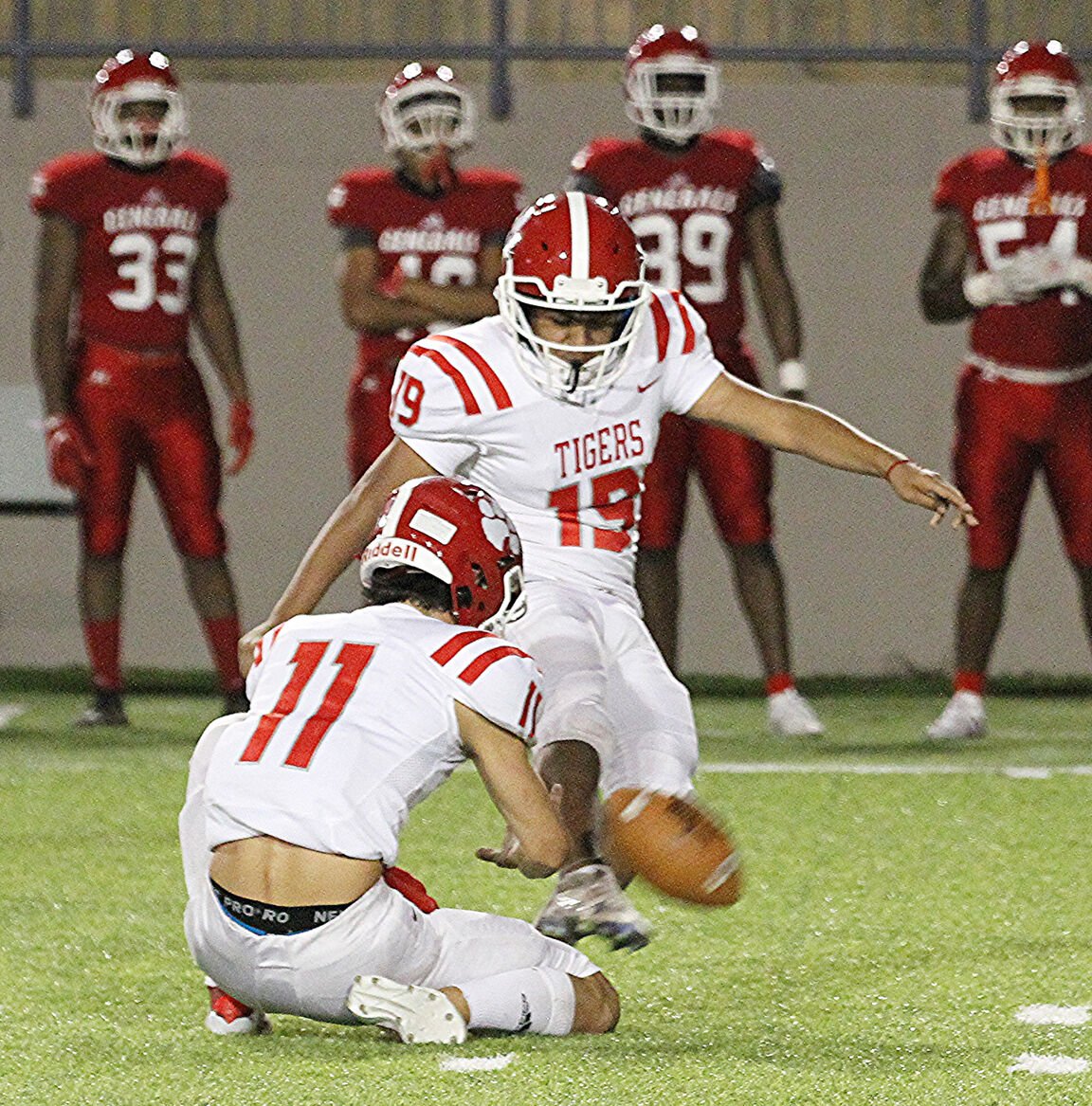 Brando Morales was added to bring life to the EHS place-kicking game. He responded with a field goal and an extra point.

MONTGOMERY – Reggie Davis’ 301 yards rushing on 27 carries and an overpowering Lee General line on both sides of the ball handed Eufaula its first loss in three outings this season Thursday night at Cramton Bow, 25-10.

Eufaula led 10-6 at halftime, but Lee simply played power football the rest of the way, outscoring the Tigers 19-0 in the second half. The usual powerful offensive attack of Eufaula which came in averaging 44 points per game, including 38 in an upset win over Class 7A Central-Phenix City six days earlier, was held out of the end zone on 10 of its 11 possessions against Lee. Other than an early second-quarter TD drive, the Tigers’ only other points came on a 32-yard field goal by new place-kicker Brando Morales with two seconds left in the first half.

The loss dropped Eufaula to 2-1 overall and 0-1 in Region 2 with yet another newcomer to region play and another annual power in Opelika awaiting EHS next week at Tiger Stadium. The Bulldogs are 1-1 after a 42-6 thrashing of Sidney Lanier last week.

Lee (2-1, 1-0) was playing its first region game after dropping from Class 7A to 6A after last season.

Eufaula took a 7-0 lead following a 12-play, 58-yard drive that was capped off by Jamarion Lewis’ 4-yard run with 10:03 left in the second quarter. Morales, unveiled after not playing in Eufaula’s first two games, booted the PAT for a 7-0 lead.

Lee drove 98 yards to pull within 7-6, using a bad snap and forced run on a punt for a first down as well as 50 yards in penalties by the Tigers along the way. Davis’ 13-yard run came with 1:13 left in the half.

However, Eufaula got its field goal by Morales at :02 to lead 10-6 at the break.

It was all Lee from there.

On its second possession of the second half, Lee drove 84 yards and took a 12-10 lead – Jakel Williams 2-yard run -- with 1:02 left in the period. Eufaula was assessed a 15-yard late-hit penalty on that drive.

Eufaula couldn’t get its usual passing attack going and Lee tacked on a final 8-yard TD run by Davis, a Florida Atlantic commit, with 4:43 remaining.

Davis’ output still didn’t match what he did a week earlier against Jeff Davis when he tallied 354 yards rushing. He had 197 second-half yards against Eufaula.

EHS did have a milestone with quarterback Hess Horne, who was 22-of-35 for 167 yards, going over the 5,000-yard passing mark for his career. Fuller led the EHS running game with 71 yards on 11 carries, while Lewis added 68 on 12. Lewis also had five receptions for 49 yards, while Jay Townsend and Ethan Black also hauled in five catches each.

MONTGOMERY -- In a must-win situation, Eufaula came up big with a 33-7 thrashing of Park Crossing at Cramton Bowl Friday night.

Chiefs improve to 3-1 after mauling of Meadowview

SELMA— Seven different players scored touchdowns as Lakeside cruised to a 64-0 victory in a non-region road game over Meadowview Christian.

There was a 59-minute lightning delay early in the second quarter of Friday night’s Opelika game at Eufaula, and the Bulldogs’ Trevon Moore jo…

This year, for all Eufaula High School home football games, we will be selling tickets differently. They will only be sold online and using th…

Eufaula’s Rashon Johnson (99) and Zadan Thomas corral Lee’s Reggie Davis on this play, but the Generals’ running back ran for 301 yards against the Tigers.

Jay Townsend hauls in one of five catches for Eufaula before looking for running room Thursday night at Cramton Bowl.

Brando Morales was added to bring life to the EHS place-kicking game. He responded with a field goal and an extra point.