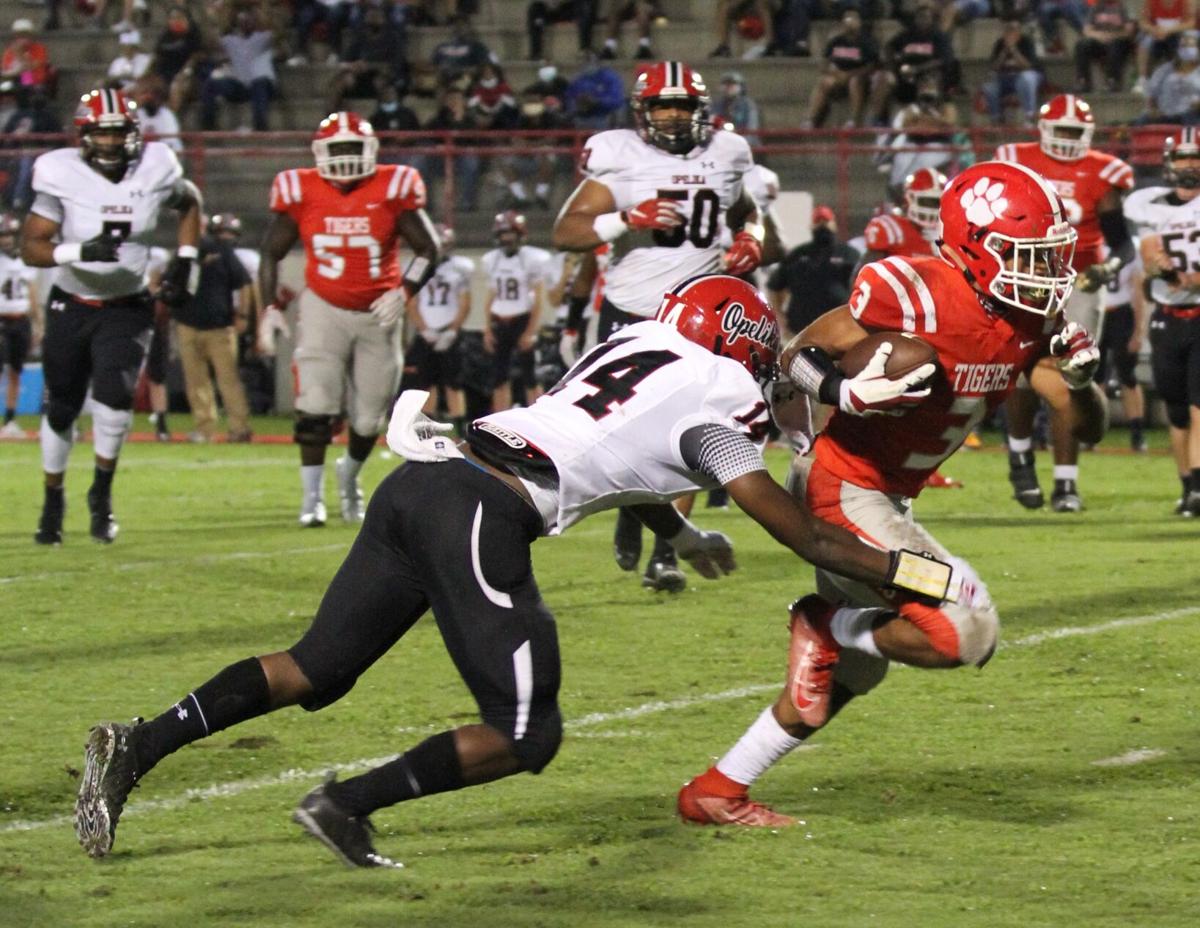 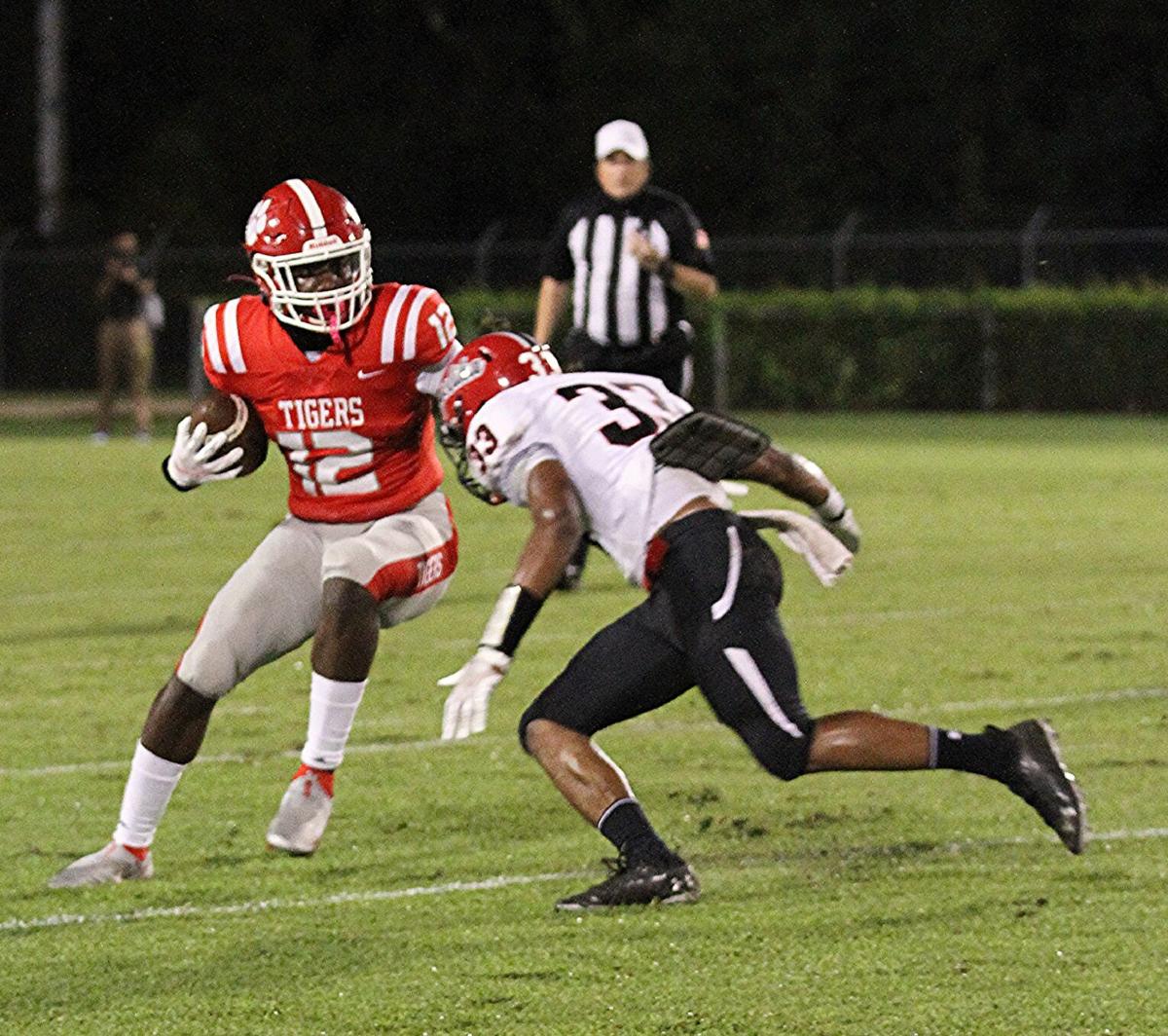 Emmanuel Stevenson (12) tries avoiding an Opelika defender after hauling in this pass for Eufaula. 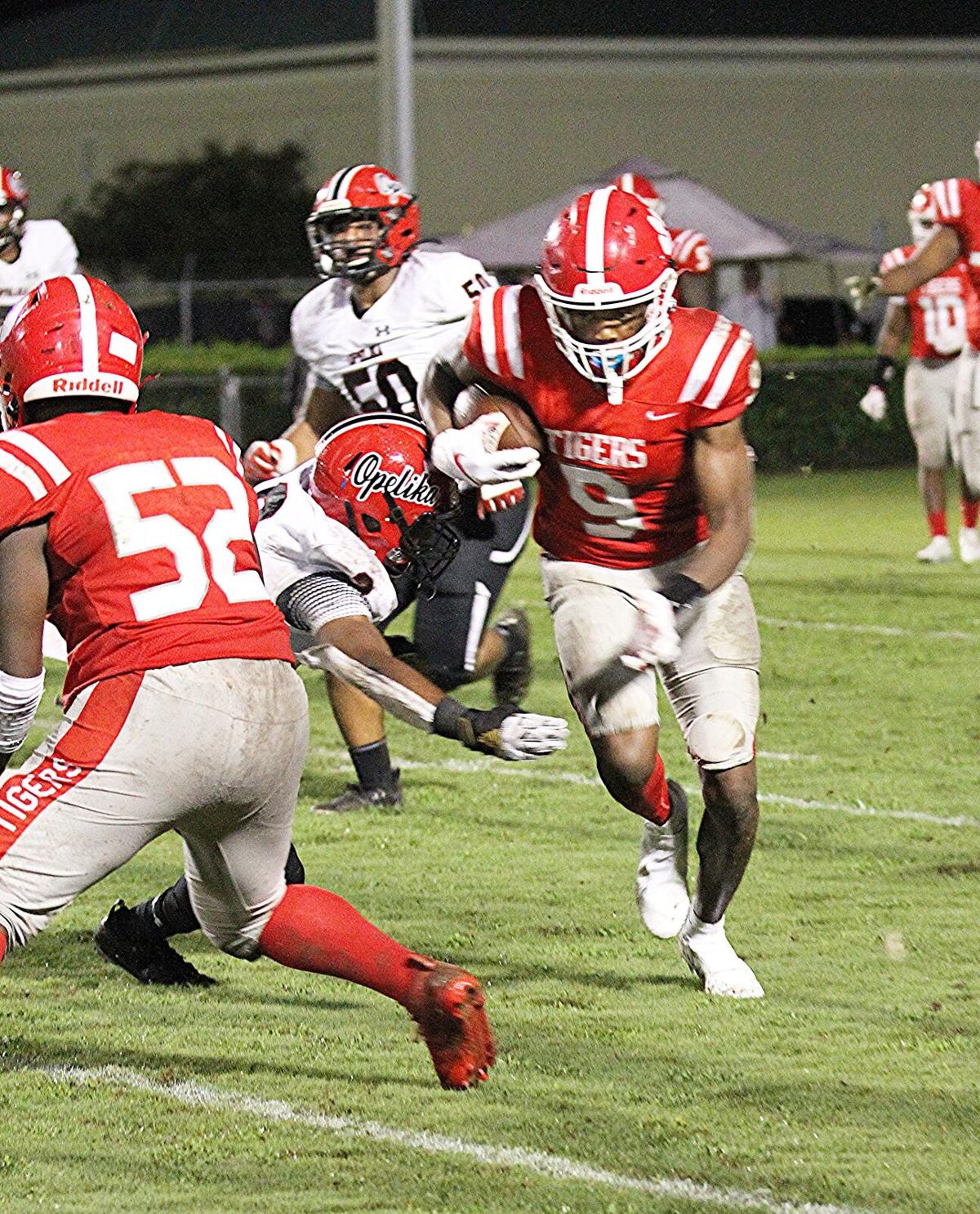 There was a 59-minute lightning delay early in the second quarter of Friday night’s Opelika game at Eufaula, and the Bulldogs’ Trevon Moore jolted the Tigers with a blocked punt that was returned for a touchdown and a big sack inside the final minute as the home team was threatening to tie the game.

Opelika is now 2-1 overall and 2-0 in region play. Eufaula, which upset 7A Central-Phenix City two weeks ago, dropped its second straight region game and is 2-2, 0-2.

The play of the night came with 5:46 remaining when Moore blocked a quick kick by Eufaula’s Hess Horne. Bulldog senior Jakai Stephens scooped the ball up at the EHS 7 yard line and rambled in from there for the go-ahead touchdown. Baker Rowton’s PAT made it 28-21.

Eufaula marched down to the Opelika 6 yard line with 41 seconds remaining, but Moore sacked Horne for a 13-yard loss on third down and Horne’s fourth-down pass fell incomplete. The Bulldogs took a knee to run out the final 28 seconds.

Eric Watts, who rushed 22 times for 220 yards on the night, put Opelika up first with a 10-yard touchdown run with 11:47 left in the second quarter.

With 10:29 left in the half, officials evacuated the field due to lightning in the area.

When play resumed, Eufaula tied the game at 7-7 with 9:31 left in the quarter on a one-handed snag by Rah Rah Thomas of a Horne pass from 15 yards out, followed by a PAT by Brando Morales.

That’s where the score remained until Devin Fuller put Eufaula on top with 8:12 left in the third period on a 2-yard run.

Opelika trailed 21-14 until tying the game with 7:17 remaining on a 2-yard quarterback keeper by Malik Finley and Rowton’s PAT.

Eufaula had narrowly escaped having Horne’s quick kicks blocked earlier, and Moore made the Tigers pay late in the game.

There were 23 penalties called in the game.

Emmanuel Stevenson (12) tries avoiding an Opelika defender after hauling in this pass for Eufaula.