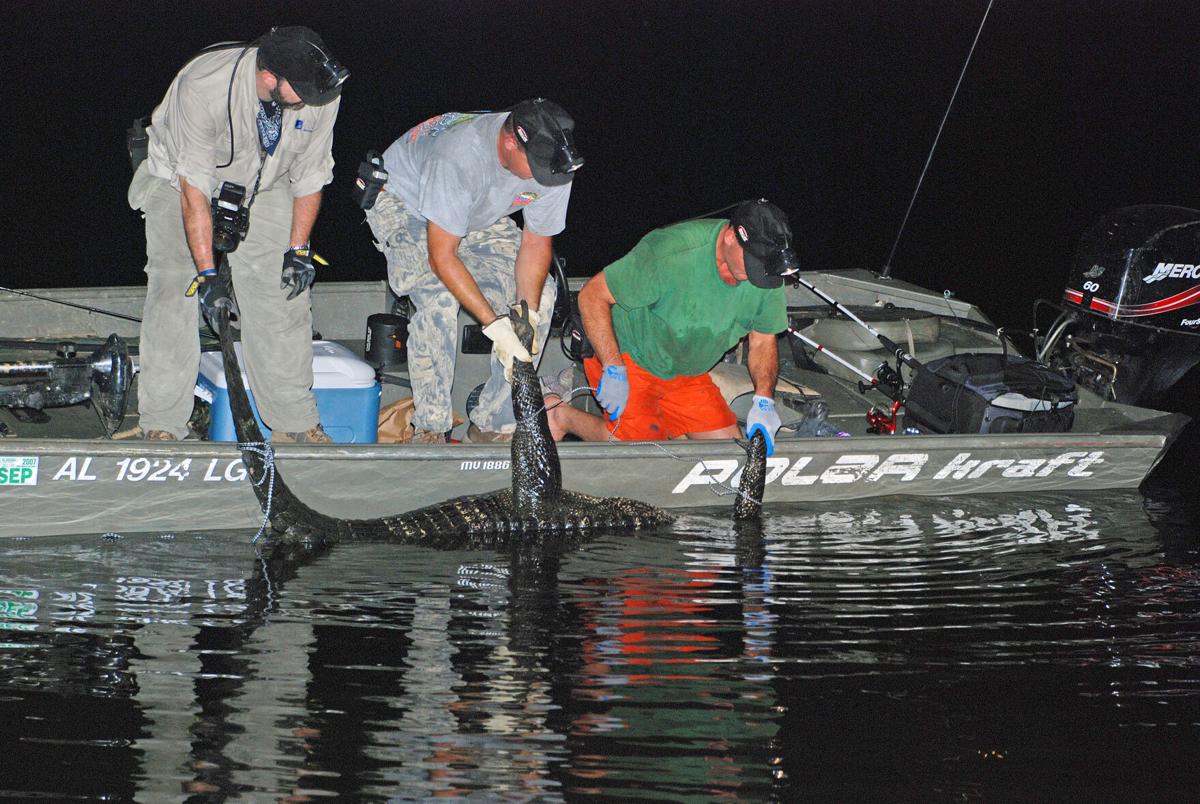 Alligator hunters must secure an animal with a snare around the head or one of its legs before it can dispatched. 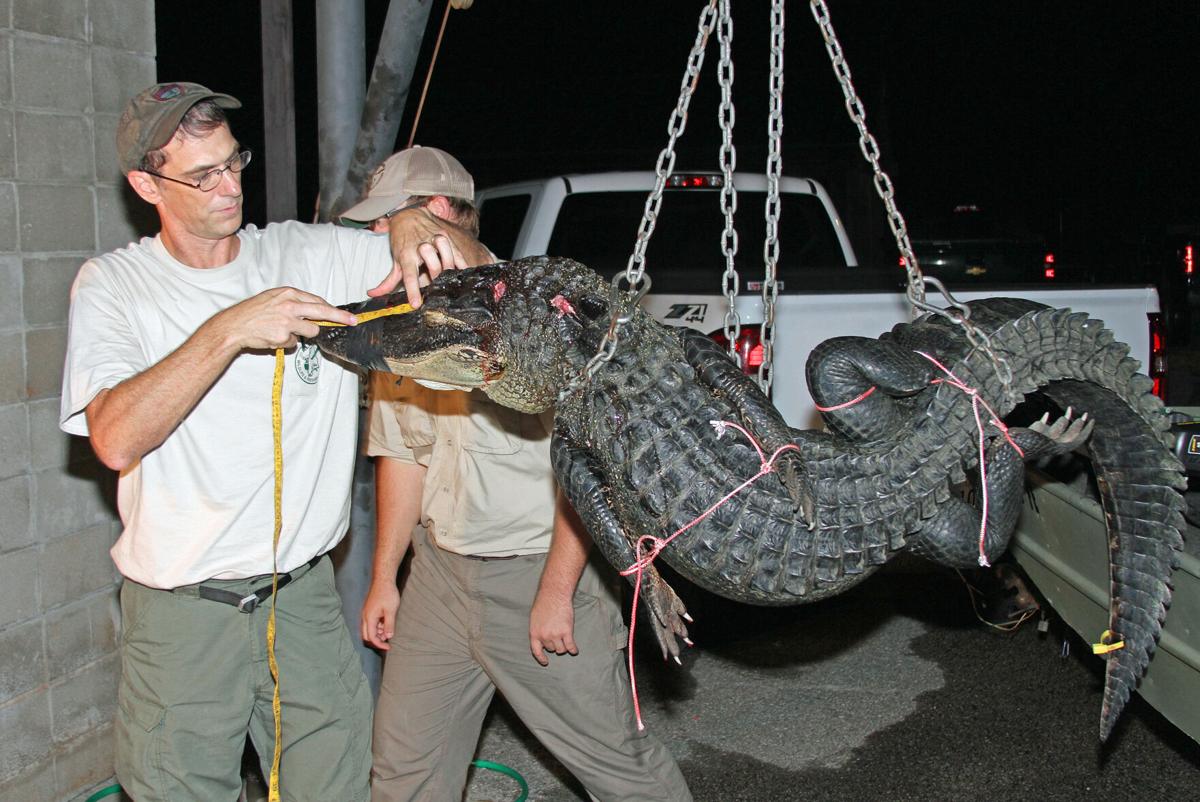 WFF Biologist Roger Clay measures the distance between the alligator's eyes and nostrils, which correlates to the overall size of the animal. 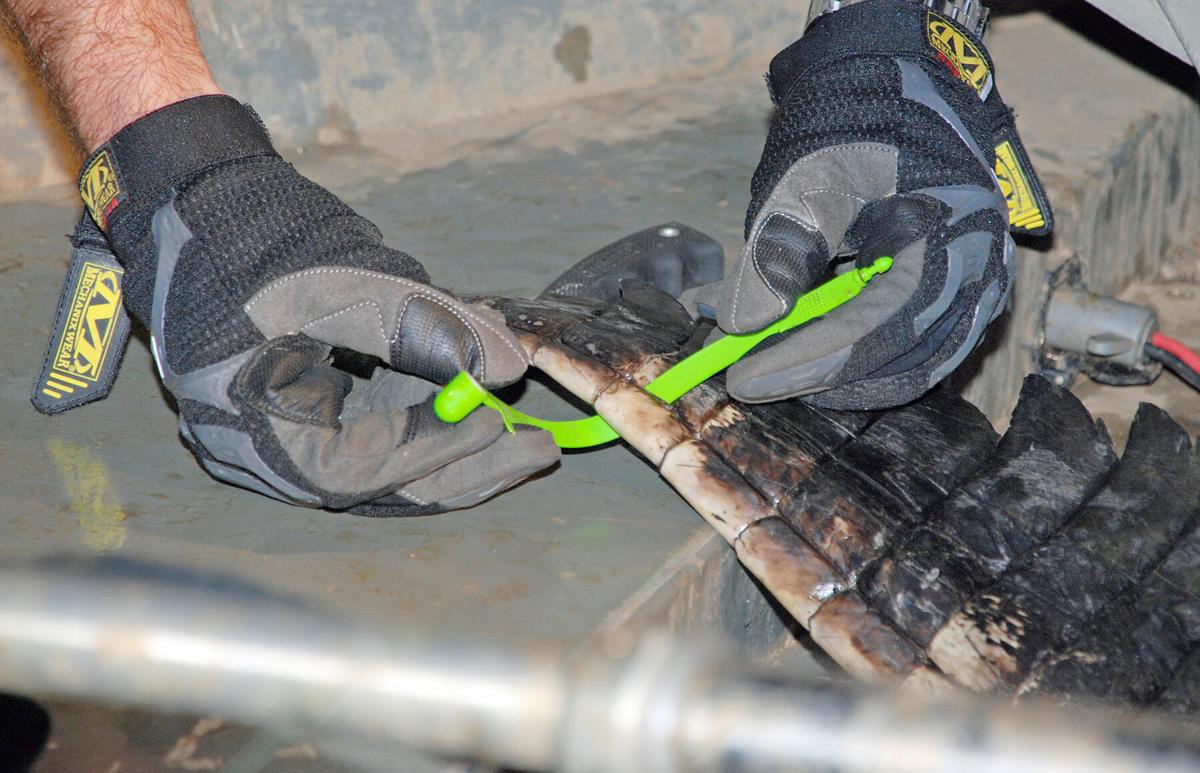 After the gator is dispatched and brought on board, the temporary tag must be attached to the tail.

With Alabama’s 2020 alligator season only a couple of weeks away, the Alabama Wildlife and Freshwater Fisheries (WFF) Division wants to remind those lucky tag holders about the no-cull rule in effect.

With the exception of the Lake Eufaula Zone, tag holders are not allowed to release an alligator after it has been captured. The exception for the Lake Eufaula Zone is because it is the only zone that has a minimum size length, which is 8 feet total length. In this zone, only alligators that are under 8 feet in length may be released after capture. In all other zones, culling is completely prohibited.

“Many folks who have been going to classes for years and are now getting the training online understand about culling,” said WFF Director Chuck Sykes. “However, I think some hunters have abused our leniency in enforcing the regulation. We just want to make sure that everybody is aware that culling is not a legal practice. This is not a fishing trip where you practice catch-and-release. This is a cold-blooded animal that expends a great deal of energy during the fight and that could end up as an unexpected mortality.

“When you have 5,000 or so people apply for one of these coveted tags, we don’t want people abusing the process and making it look like a catch-and-release fishing tournament. We just wanted to clarify that culling is not allowed.”

Wildlife Section Chief Keith Gauldin said this regulation has been in effect since Alabama’s 2018 alligator season.

“Just as you don’t capture and release any other game animal, hunters are not allowed to practice releasing alligators unless they are hunting in the Lake Eufaula Zone, where there is a minimum harvest length of 8 feet,” Gauldin said. “A captured gator is your gator, so be sure to review the training videos on the website. The videos give you helpful tips on how to judge the size of an alligator.”

Gauldin said there is a direct correlation between the distance from the gator’s nostrils to its eyes and the total length of the animal. If the distance from the nostrils to the eyes is 10 inches, the estimated total length of the alligator would be 10 feet. Visit www.outdooralabama.com/alligator-hunt-tag-training-videos for the six training videos and one that explains the no-cull regulation.

Tag holders must abide by the rule that applies when an alligator is “captured.”

“In the past, we have seen individuals on social media posting alligators that they have captured, taken pictures of and then released,” Gauldin said “We don’t want hunters to cause any undue stress on these animals.

“By regulation, an alligator is considered captured once it is secured with a snare around a leg or the head and is secured boat-side and in control. It must be immediately dispatched and the temporary tag applied. We want to stress that before hunters pursue an alligator and throw a hook at it or any of the legal means of catching an alligator, they should view that gator and estimate its size closely. They need to make sure that’s the one they want to harvest.”

Gauldin said another rule that will be closely enforced has to do with boats providing assistance during the pursuit of an alligator.

“When hunting parties have multiple vessels involved, only the boat with the tag holder can have the capture equipment in it,” he said. “The other vessels that are assisting can only have spotlights but no capture equipment.”

Capture methods are restricted to hand-held snares, snatch hooks (hand-held or rod/reel), harpoons (with attached line), and bowfishing equipment (with line attached from arrow to bow or crossbow). The use of bait is not allowed.

Gauldin said the WFF’s Enforcement Section will be out in full force during the alligator season to ensure the regulations are followed.

“There is a high likelihood hunters will be checked by a Conservation Enforcement Officer at least on one of the nights of the season,” he said. “It’s a good idea to put all of your identification, hunting license and alligator tag in a Ziploc bag for easy access instead of having to dig it out of your wallet at one o’clock in the morning. Have that ready for presentation when you get checked. It will make it easier for our officers and make for a more timely check for the hunters.”

Gauldin also wants hunters to refrain from consuming alcohol during the hunts.

“We want hunters to have a good time but a safe time,” he said. “Combining alcohol and alligator hunting is not a good idea.

“And make sure everyone has a PFD (personal flotation device). It’s a good idea to have that PFD on if the boat is under throttle, especially at night. Obstructions are much harder to see at night. We just want them to have a safe hunt.”

The Alabama alligator season is broken into five zones throughout south Alabama, the traditional range of alligators in the state.

The zone where Alabama’s first season originated is the Southwest Zone, which has the most tags (100). The Southwest Zone includes all of Mobile and Baldwin counties north of I-10 and private and public waters in Washington, Clarke and Monroe counties that lie east of U.S. Highway 43 and south of U.S. Highway 84. The 2020 season dates are sunset on August 13 until sunrise on August 16 and sunset on August 20 to sunrise on August 23.

The Coastal Zone (50 tags) was created last year to address the rising interaction between alligators and the human population along the Coast, where WFF receives most of its nuisance alligator complaints. The Coastal Zone includes the private and public waters in Baldwin and Mobile counties that lie south of I-10. The 2020 season dates are the same as the Southwest Zone.

Alabama’s alligator harvest numbers have been consistent at between 65 and 70 percent of the available tags since the program’s inception.

And one never knows when another monster gator will be hauled in that rivals the current world record of 15 feet, 9 inches and 1,011.5 pounds that was harvested in 2014 by Mandy Stokes of Camden.

Reported by the Eufaula Police Department.

Troy Hicks, a sophomore, was recently named as the Wallace Community College-Dothan Student Government Association President. Hicks is a gradu…

Storm causes flooded streets and homes, but no injuries reported

The aftermath of Hurricane Sally left some Eufaula residents with flood damage and others with damage both of trees and from trees.

MONTGOMERY -- In a must-win situation, Eufaula came up big with a 33-7 thrashing of Park Crossing at Cramton Bowl Friday night.

Sign Gypsies of Eufaula has partnered with The Gardens of Eufaula and River Oaks Assisted Living facilities for the “Boo Campaign.”

From the pages of the Eufaula Tribune:

TUSCALOOSA — Javarius J. Norris of Eufaula was named to The University of Alabama Deans List for summer 2020.

Alligator hunters must secure an animal with a snare around the head or one of its legs before it can dispatched.

WFF Biologist Roger Clay measures the distance between the alligator's eyes and nostrils, which correlates to the overall size of the animal.

After the gator is dispatched and brought on board, the temporary tag must be attached to the tail.