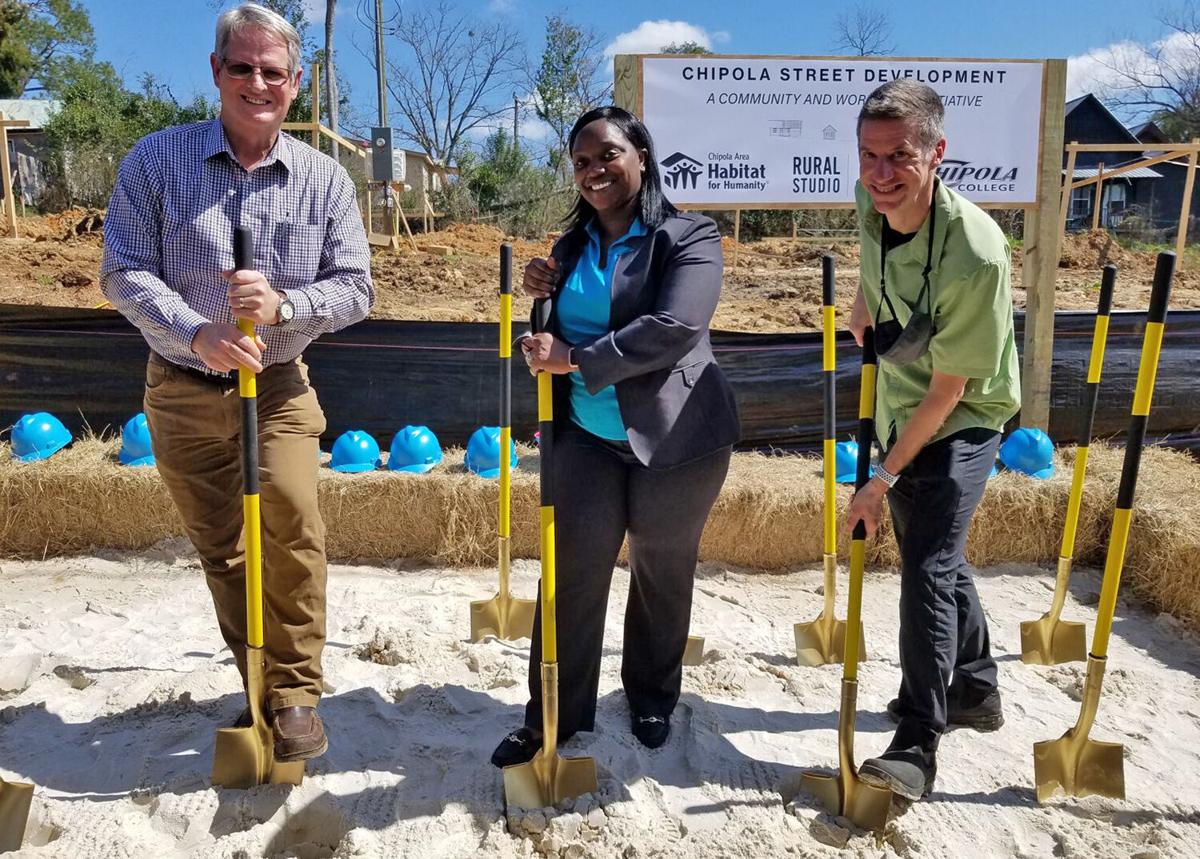 From left, Chipola College Dean of Workforce/Economic Development Darwin Gilmore, Chipola Area Habitat for Humanity Executive Director Carmen Smith and Auburn University Rural Studio Associate Director Rusty Smith are among those participating in a ground-breaking ceremony Thursday to mark the start of a four-house building project in which the three entities have partnered. 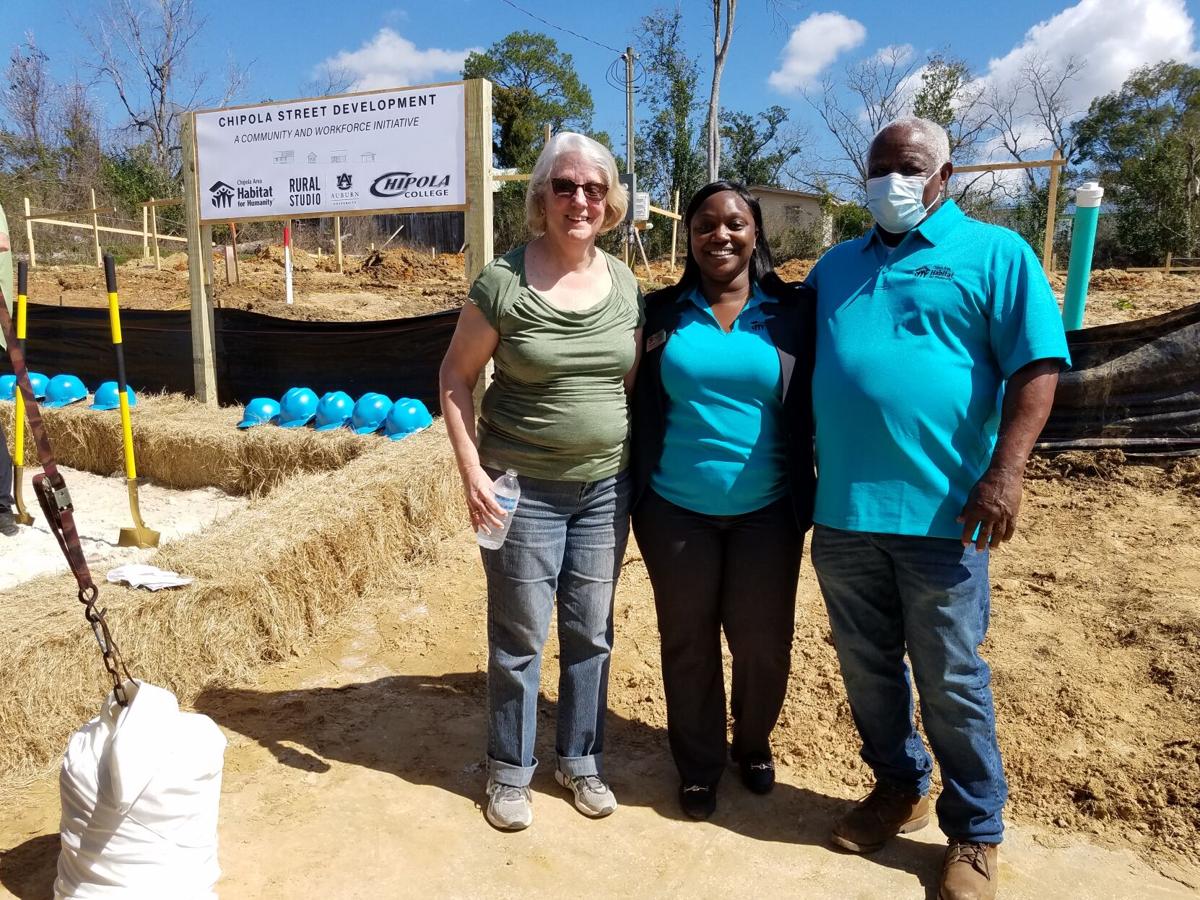 Janet Harns, left, and Isaiah Morgan, right, have been involved in the local Habitat for Humanity organization since its inception 33 years ago. They stand here with the group's Executive Director Carmen Smith.

Chipola Area Habitat for Humanity Executive Director Carmen Smith and her team have entered into a unique partnership with Chipola College and Auburn University on a project which is predicted to become a national role model.

The three entities are making history as they join forces to design and build four tiny, affordable homes on extra-small, side-by-side lots along Chipola Street in Marianna.

A big crowd turned out Thursday for a groundbreaking ceremony to mark the start of work and many more people were tuned in remotely to participate and/or watch as the moments unfolded. Behind the ceremony site were the four small lots where the homes will go, with rudimentary framework in place and providing a backdrop. Foundations had already been poured for the houses as well. Work continues daily as the project moves forward.

Chipola College students from the school’s new Building and Construction Technology division of its Workforce Development Program, and their instructors, will work alongside community volunteers as well as the eventual home owners as those individuals put in the “sweat equity” they’re required to expend as a condition of receiving their homes. They’ll pay for their houses by way of no-interest long-term mortgages that are essentially traditional except for that zero-interest fact.

The Habitat/Chipola/Auburn partnership has also earned support from Fannie Mae and Regions Bank. The nature of that support was not spelled out at the ceremony Thursday, but leadership from both those entities spoke remotely in congratulating the team for its one-of-a-kind union.

“This project serves as an initiative to develop a scalable and sustainable permanent housing solution for rural, vulnerable populations,” Habitat leadership said in a press release announcing Thursday’s ceremony.

“The project outlines a system that can be replicated, not just in our service area, but in rural spaces across America. Often, rural communities must adjust cookie-cutter urban ideas and force them on our communities. This idea is generated by rural partners and cultivated specifically for rural communities,” said Carmen D. Smith, the Chipola Area Habitat for Humanity Executive Director.

Normally, such small lots would not be big enough to be workable under typical home site rules. But Marianna leadership was on board to let it happen. On Thursday, Marianna Mayor Travis Ephriam and City Manager Jim Dean both spoke about the value of the project as one small step in reducing homelessness and raising the inventory of affordable workforce housing and, in the process, creating new opportunities for pride in ownership for some local citizens.

The project will be the first large-scale real-world project taken on by the first-ever students in Chipola’s new building skills program. Their first foray into the field came a few weeks ago in assisting “Today’s Homeowner” host Danny Lipford and a team of volunteers develop Lafayette Landing pocket park on Marianna’s main business corridor.

“Chipola College Workforce Development recruits and trains the present and future workforce in our Region,” the release stated. “Its goal is to provide students with a competitive edge in today’s marketplace that will land students in high-quality jobs.”

To have participated, while still in school, in a real-world build, program directors say, gives them one more edge as they enter the workforce.

“Rural Studio is an off-campus design-build program part of the School of Architecture, Planning and Landscape Architecture of Auburn University,” the press release states about the Alabama team’s role in such projects. “The students work within the community to define solutions, fundraise, design and, ultimately, build remarkable projects,” it continues.

“The Chipola Street development will provide affordable homeownership while incorporating the importance of best-practice and beyond code building technology, workforce training and development, and highlights the importance of public-private-non-profit partnership,” the release states.

Among those attending the ceremony in person was Isaiah Morgan, one of the local Habitat chapter’s longest-standing board members and volunteers. He’s hammered nails, put up walls, or built in some way on every single home that the local Habitat team has touched in Jackson County over its 33-year history and he’ll be there for these next four as well. They’re already underway and the work is expected to move fast: Two of the four should be ready for occupancy in late summer, and the other two around Christmas time.

Also there that day was Janet Harns, a founder of the local Habitat chapter that has, to date, built 74 homes in Jackson and Washington counties combined. The bulk of those are in Jackson County, as Washington County didn’t come into the fold until a few years ago. The name of the chapter was changed to reflect that new responsibility taken on by the Habitat board and its staff leadership.

Harns’ eyes teared up as she talked about the project behind the ceremony, and one of the key people behind the project: Executive Director Carmen Smith.

Harns said Smith was the answer Habitat needed as its mission continued to grow back then. On the board of directors that hired her, Harns said Smith’s spirit of service and her understanding of and belief in the mission made it evident that she was the right choice for the job.

“I knew she was the one,” Harns said, adding that this partnership Smith pulled together is a dream-fulfilling circumstance, a realization of some of her own highest hopes in the founding of Habitat.

“Since 1988, Chipola Area Habitat for Humanity has helped families achieve self-reliance and stability through shelter. Developing community partnerships and the shared goal of transforming lives are vital to our work,” Habitat leaders said in the release. “We believe that families should not just survive, but that they should flourish. We understand that adequate shelter is often the catalyst that ignites transformation. With the help of our communities, we construct new homes, remodel homes, and facilitate home repairs for families affected by Hurricane Michael. Find out more about Chipola Area Habitat for Humanity at www.chipolahabitat.org or on Facebook at fb.me/chipolahabitat.”

MARIANNA — A champion of Jackson County citizens, their health and their general welfare was posthumously awarded honors as the recipient of t…

The following people were booked into the Jackson County jail during the latest available reporting period, April 10-13:

More than 150 people turned out for an open house celebration at Jim Whaley Tires on Thursday, April 8, from 11 a.m. to 1 p.m. to celebrate th…

A look back at local history through the Jackson County Floridan archives.

Fencing comes down at Endeavor

MARIANNA – Jackson County Commissioners met at 8 a.m. Tuesday to watch as some of the fencing around the old Dozier School for Boys was taken down.

Sheriff Donnie Edenfield was the special guest speaker at the regular Wednesday meet of the Optimist Club of Marianna recently. He talked to t…

From left, Chipola College Dean of Workforce/Economic Development Darwin Gilmore, Chipola Area Habitat for Humanity Executive Director Carmen Smith and Auburn University Rural Studio Associate Director Rusty Smith are among those participating in a ground-breaking ceremony Thursday to mark the start of a four-house building project in which the three entities have partnered.

Janet Harns, left, and Isaiah Morgan, right, have been involved in the local Habitat for Humanity organization since its inception 33 years ago. They stand here with the group's Executive Director Carmen Smith.