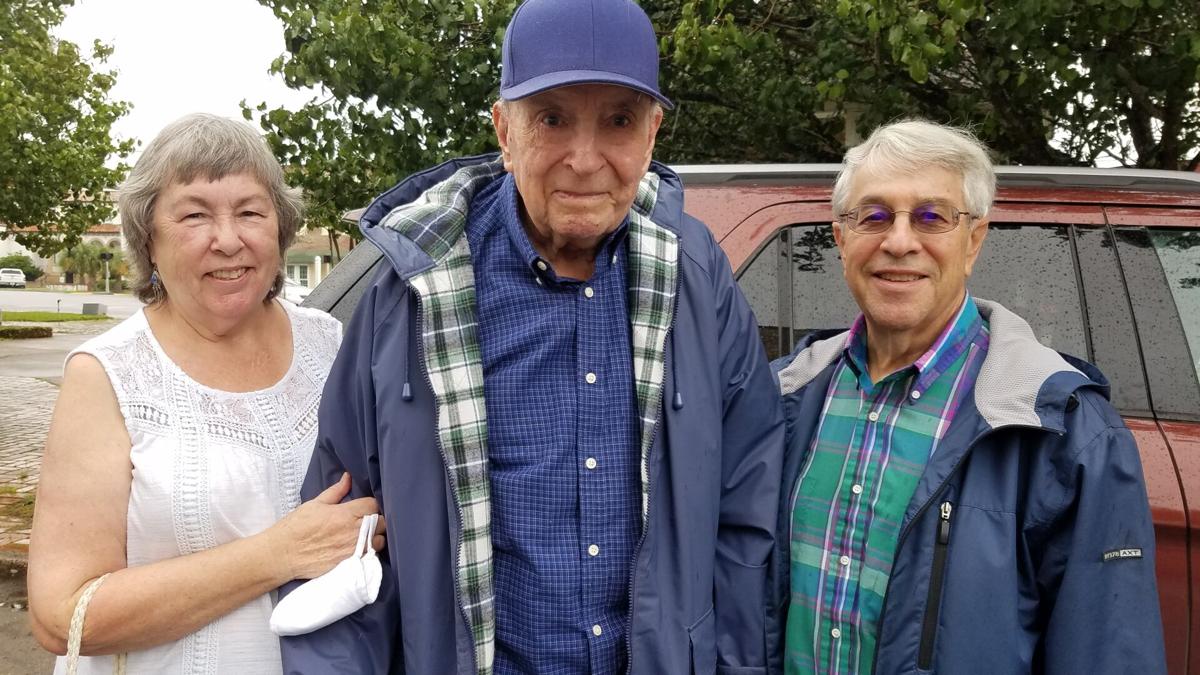 Larkin “Pete” Bowen, left, as a child, with sister Laura and his dad Tom Bowen beside the Model T Ford that Pete learned to drive starting at the age of 6.

Larkin “Pete” Bowen and Orianna Bowen early in their marriage.

This picture of Orianna and Larkin “Pete” Bowen was taken at a gathering where they celebrated their 65th anniversary 14 years ago.

A reception will be held that day, 2-4 p.m. in the Jackson County Agriculture Center on U.S. Highway 90. All who know and care for him are invited to attend. The family asks that those attending wear a mask.

Bowen comes from a long line of tough individuals and even at this age he stays busy tending a few cows on his 30-acre spread, although he’s been mostly sidelined for about five weeks due to an illness. But he’s expected to recover from that and once again have a big hand in tending his place.

He got outside again last week for the first time since that happened and was glad to be there. He’d mostly made his living out-of-doors, starting as a guard with Florida’s road department before it grew to become the Florida Department of Transportation. Back then, prisoners made up most of the road crew, shoveling and loading dirt by hand for the department’s projects in this region.

Now that and other routine work is done with big machines like loaders and graders. Bowen tested and drove the first mechanized excavator ever put in service by the state, having risen in the ranks.

He liked progress. “It just got better,” he said of the effect such changes had on his working life.

Bowen liked advancements in his personal life, as well, but also values the tried-and-true. Gasoline-powered tractors had come along by the time he was born, but they were still in their infancy. By the time he was grown, though, International Harvester was a leader in the field. His old International is still a valued asset on his place. He wouldn’t get that right away.

He made $85 a month back when he started with the state’s road department as a guard. He married at the age of 20, choosing as his bride a childhood friend-turned-sweetheart, 16-year-old Orianna Elizabeth Jackson Bowen. They paid $3 to get hitched.

Their wedding night supper was sandwiches made of Spam and light bread.

On their 65th anniversary they were treated to a very nice dinner, but as a joke a family member first brought out some Spam and bread. The couple lived happily until his wife’s death 14 years ago, before their 66th. Together they’d seen eight grandchildren, 9 great-grandchildren and four great-great-grandchildren come into the Bowen fold.

The two had raised four children. On those early wages, he had to do a little extra to help the family thrive. That included shucking oysters and delivering Sunday’s “Pensacola News Journal” on a local route. That delivery earned their children’s lunch money. The first car he drove was his daddy’s Model T Ford. He was learning to drive by the age of 6. His own first car was a Model A Ford that he bought for $450 and that took him to those jobs that earned his living. He would eventually retire as a supervisor at DOT, where he’d trained a stream of engineers in the realities of road maintenance issues.

The couple had just two acres of land for most of their adult lives, but kept the family table full with what they grew in their big garden. They’d pick vegetables before he went to work in the morning and as the children grew they’d help shell peas and such. They eventually got a freezer and kept that full, too, but in the meantime the wife canned things in jars to keep their larder plentifully supplied.

In the winter, he’d cut down dead trees to heat the home via the family’s pot-bellied stove.

When they first married, the shell of their home was built by a well-known contractor in this area at that time, by the name of Bevis.

But they couldn’t finish it inside right away. Instead, full of energy and purpose, they’d buy knotty-pine panels when he got paid, as many as they could afford, and put them up month-by-month.

It was nine years before they could put down a deep well. He had big jars he’d fill with water at work to use for drinking and cooking. An existing shallow well on their two acres provided water hauled up in a bucket for washing clothes, dishes and bodies.

They had an outhouse for a few years before they could afford indoor plumbing. He helped put that in, along with the wiring for electricity.

He wouldn’t be done with adding-on for many years.

He had a son-in-law to help him by the time he decided he should build and enclose a front porch.

And when his wife starting getting quite ill in her last years, he built an enclosed back porch for her to enjoy, another labor of love carried out with that son-in-law, Bob Weinstein, husband of daughter Dianne.

He’d been retired for quite some time by then, but that was just on paper. He was, and is, far from the rocking-chair years. Soon after he’d retired from his day job he turned his two-acre homestead into a 30-acre spread. He’d always dreamed of becoming a rancher but that was a no-go while he had children at home and needed an income stream that wouldn’t be so much at the mercy of weather. When he got those 30 acres, though, he fenced it in and did increase his cattle operation along with his agricultural pursuits. He’d grow peanuts and cotton along with more vegetables and watermelons. He almost always had cows, hogs and chickens on the place.

He’s cut back on that farming now but still has a few cows and is never without something to do.

Bowen looks forward to Oct. 24 with some surprise. “I didn’t ever think I’d make it this far,” he said. When asked what helped him get there, he offered this: “Good, clean, honest living. Hard work, and the Lord,” he said. “Treat everybody right whether they do the same for you or not. I’ve outlived most all my people — my older sister passed at 92 — and many friends.”

Dianne’s sisters, Ruby Ellen Oswald and Winnie Thames, will join him in greeting the friends, like those at Trinity Baptist Church, where he is an active member, and the other relatives that are still here to celebrate this milestone with him and to remember with love their brother, the late Hays Bowen, their mother, and others he believes will be there to greet him on the other side someday.

This story has been updated to correct the spelling of "Dianne." The Floridan regrets the error.

The Washington County Sheriff’s Officer reports the arrest of Chipley woman Sharmin Corbin, 46, on multiple charges in a case that originated …

Ronstance Pittman had a double mastectomy in 2020, followed by another related surgery, chemotherapy and radiation.

The following people were booked into the Jackson County jail during the latest available reporting periods from Oct. 13-15:

The following people were booked into the Jackson County jail during the latest available reporting period, Oct. 9-12:

The president of The Artists Guild of Northwest Florida will be the guest speaker at next Tuesday’s Chipola Regional Arts Association meeting.…

Jackson County Commissioners and the Jackson County School Board will meet in a special joint session at 5:30 p.m. on Tuesday, Oct. 19, to dis…

From the Floridan archives: 1944

A look back at local history, through the pages of the Jackson County Floridan archives.

The following people were booked into the Jackson County jail during the latest available reporting period, Oct. 16-19:

Larkin “Pete” Bowen, left, as a child, with sister Laura and his dad Tom Bowen beside the Model T Ford that Pete learned to drive starting at the age of 6.

Larkin “Pete” Bowen and Orianna Bowen early in their marriage.

This picture of Orianna and Larkin “Pete” Bowen was taken at a gathering where they celebrated their 65th anniversary 14 years ago.