The Bay County Sheriff’s Office on Wednesday announced the arrest of Panama City resident Jeremiah Beazley, 44, as a suspect in a Southport homicide that morning.

The victim was identified as 44-year-old Southport resident Bryan Thomas Anderson. Officials say he was found dead with multiple gunshot wounds, and that a witness told deputies Anderson and Beazley had been engaged in a confrontation when the shooting occurred at 9020 Ronnie Road.

An investigation into the killing was initiated around 6:30 a.m. and Beazley, who had reportedly run from the scene, was in custody by 9:30 a.m. He was located at the home of an acquaintance on Jeffrey Road, officials report.

He is charged with an open count of murder and of being a felon in possession of a firearm.

OCALA (AP) — A federal prison guard in Florida has been accused of participating in a scheme to smuggle drugs into a facility, officials said.

The following people were booked into the Jackson County jail during the latest available reporting period, April 7-9:

Alabama man Harvey Drayton Burch III, 40, has been charged in Jackson County with possession of a controlled substance without a prescription …

The following people were booked into the Jackson County jail during the latest available reporting period, April 3-6:

An Alford man has been identified as the driver of a UTV that struck and killed a 14-year-old girl in the Mossy Pond community of Altha on March 27.

Marianna man C.B. Miller Jr. has been charged with possession of a firearm by a convicted felon.

Woman who coughed on cancer patient gets 30 days in jail 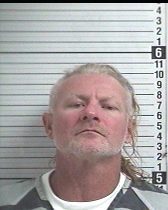