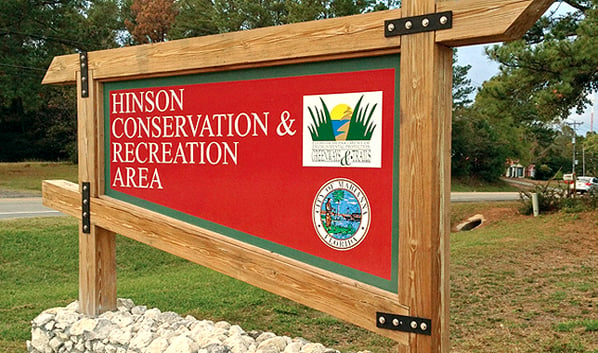 In this 2011 Floridan file photo, the entrance sign on SR 73 in Marianna, Fla. directs visitors to the Hinson Conservation and Recreation Area. 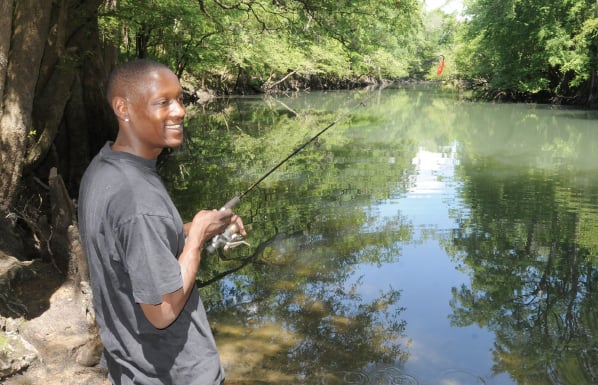 In this Floridan file photo, Marrell Hunter gets some advice from Margaret Hunter as they fish at the Hinson Conservation and Recreation Area in Marianna, Tuesday, May 28, 2013.

“There’s a little bit of magic in a wooden canoe.”

There’s a little bit of magic in the voice of the man that made the observation, too.

Dick Hinson said it as he narrated a 1996 slide show of his 100-mile, five-day canoe trek of the entire Chipola River with good friend Sonny Anderson, just shy of their 60th birthdays in 1986.

Hinson presented it several times to clubs and church groups over the years.

Anderson’s widow, Joanne Anderson, recorded a master copy of it once and since had it converted to a DVD.

And thanks to her generosity, Hinson’s son, Randall, has a copy, as does the Jackson County Public Library System. It was posted for the first time on the library’s website Thursday. It’s there to stay, said Jackson County Library Director Deborah Hynes, ensuring that it will be available for all to enjoy for many years to come.

That rich Dick Hinson baritone rings with authority and knowledge about a river he loved and deeply respected in his lifetime. It brings his essence alive, transporting the listener backward from his death in 2012, at the age of 85, to the days when his was the acknowledged and very present voice of the Chipola.

Hinson grew up on the Chipola River, no doubt playing war games and having other adventures along its banks and in the deep woods that surrounded the body of water that he so loved. As a teenager, he swam the three-mile length of Merritt’s Mill Pond in a rite of passage that he and countless other local boys would pass through on their way to manhood. Over time, he came to know the river as well as anyone.

As a boy, he collected arrowheads some distance away from the mouth of Alamo cave on the banks of the river. As a man, he studied the history of the natural world around him and became a noted expert on that subject.

He established his home near the river in young adulthood, where he and wife Ann raised their four boys.

And a few years before he died, Hinson did something that would benefit generations of children to come. By deeding a substantial swath of his river property to the state for low-impact recreational uses, he made sure a little corner of that wild world is left for other children to explore down through the ages.

Growing up on the river and swimming it thousands of times no doubt helped prepare Hinson for the Navy, where he became an original member of the elite World War II-era “frogmen,” a special-forces underwater demolition team that later evolved into the Navy SEALS. Hinson was a sharpshooter and had a distinguished turn in the military before returning to his native Jackson County to become a successful businessman.

The documentation of his trip in words and pictures, Hynes said, is an important treasure. “It enables us to share some local history and some important facts about Jackson County. It is such a beautiful place...the world outside just doesn’t really know how beautiful it is, and something like this can really increase appreciation of it.”

An introduction written by Randall Hinson, one of Dick and Ann Hinson’s four sons, can be seen alongside the piece.

The son said he was proud to provide it and holds the DVD dear.

“Both Sonny and Dad grew up around the Chipola River, and in it,” Hinson remembered in talking about the DVD and his father’s history on the river and as a friend of Anderson’s. “As kids, it was a flurry of activity around that river for them as they explored, cooled off and swam...they had a lifelong spiritual affinity and affection with the Chipola River.”

The Jackson County Sheriff’s Office reports the arrest of Austin Dean Allen, 31, of Bascom, on Sunday.

The following people were booked into the Jackson County jail during the latest available reporting period, June 16-18:

The following people were booked into the Jackson County jail during the latest available reporting period, June 19-22:

A Miami man was arrested in Jackson County Thursday on charges of stalking and violating an order of protection, according to the Florida High…

Melons in the Park event is June 26 in Marianna

Venders at the Marianna City Farmers Market will host their annual “Melons in the Park” event on Saturday, June 26, in Madison Street Park fro…

An individual was shot and killed in the early morning hours Wednesday in a deputy-involved incident, according to a press release from the Ja…

In this 2011 Floridan file photo, the entrance sign on SR 73 in Marianna, Fla. directs visitors to the Hinson Conservation and Recreation Area.

In this Floridan file photo, Marrell Hunter gets some advice from Margaret Hunter as they fish at the Hinson Conservation and Recreation Area in Marianna, Tuesday, May 28, 2013.