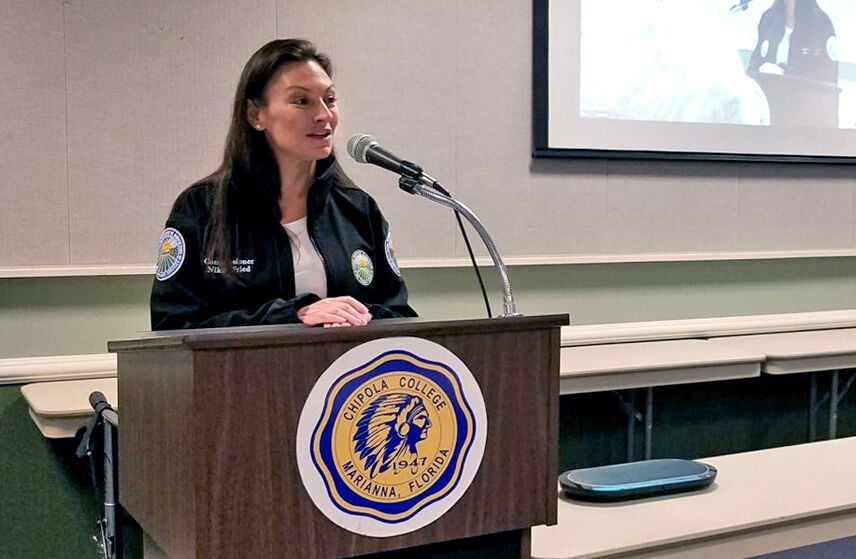 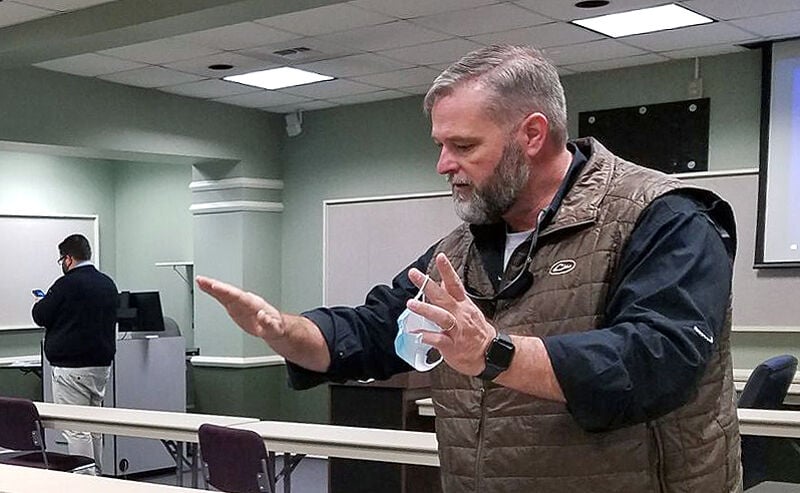 Eric O'Bryan talks about things he'd like to see USDA change in the crop insurance program.

Florida Agriculture Commissioner Nikki Fried recently broke her right foot in two places. But that didn’t stop her from making her scheduled visit to Marianna on Wednesday to host a town hall meeting at Chipola College with local farmers regarding crop insurance and how they think the program could be improved.

With the aid of a knee scooter she wheeled to the podium to introduce the panel of individuals participating in the session remotely via Zoom. Richard Flournoy, acting administrator of USDA’s Risk Management Agency, was among them, along with RMA’s Valdosta, Georgia Regional Director Davina Lee. That office serves Florida and a handful of other nearby states.

The group took questions from the floor, from those watching via Zoom and some that were submitted ahead of the meeting.

Crop insurance is a public-private partnership between USDA and insurance providers. It has its roots in the Depression era and has evolved over time.

Eric O’Bryan was at Wednesday’s meeting and opened up a conversation among producers in physical attendance after the presentation. He’s a crop insurance agent under contract with providers, tasked with getting customers lined up for them. He’s been in the business three decades.

He made three main points.

A new Hurricane Indemnity program within the crop insurance opportunity helps cover damage that exceeds the 75 percent-of-loss maximum that the basic insurance will cover.

This extra-box option covers the next 20 percent of loss, with the total combined possible coverage capped at 95 percent.

But the coverage settlement is only triggered in areas where hurricane-level winds are in play, plus one county over from those.

O’Bryan wants USDA to work out a tropical storm-force provision that would expand the eligibility to a winder span of counties in the path of the storm.

As it stands, although he praises it as a worthy program, many producers that suffer similar damage as those in areas with hurricane level winds but just miss the trigger point because winds dropped just below hurricane level by the time the storm reached them, often just a few miles from the strongest winds.

In the case of Hurricane Sally, for instance, he noted that while Santa Rosa, Escambia and adjacent Okaloosa County were eligible for the additional settlement, the next counties over didn’t, even though farmers suffered just as much with tropical storm force winds twisting their crops to shreds.

“The feds did a great job in putting this program in place and with it’s quick turn-around as far as getting money to the covered quickly, but they need to tweak it by adding this tropical storm force circumstance to the policy terms, to really get it where we need to be and help these farmers,” O’Bryan said.

His other two main concerns have to do with timing.

Farmers have to decide on what coverage they want by Feb. 28. That deadline is too close to the date that commodity prices for the coming year are announced – just two weeks. Commodity prices are a a major factor in a farmer’s decisions about what they’ll plant and, in turn, what insurance will best meet their needs. The producer is forced to make million-dollar and very complicated decisions in too short a time frame, he says. He thinks the buying deadline for insurance should be set to a later date on the calendar.

The current deadline, he said, doesn’t take into account this current Wall Street-based price-setting practice and the evolving nature of crop insurance.

Back in the day, there was only one type of crop insurance and a farmer could easily and simply choose his level of coverage. But now, with many crop insurance products in play and with price-per-pound for commodities determined on the market, the decision is far more complicated.

For instance, the price of cotton was just set at 80 cents a pound for the coming year. Producers didn’t know that a week ago, and it plays into how much money he can borrow from the bank to make that a feasible crop for him. Now, O’Bryan and his counterparts must scramble to get premium prices prepared for the farmers in time, and the farmers can feel rushed into decisions. O’Bryan said that could all be avoided if USDA at its Risk Management Agency, through which the crop insurance program operates, would simply push the insurance buying deadline forward to a more reasonable date based in the realities brought into play by the timing of today’s market-based pricing.

“If we’re trying to really work for the Florida farmer, he needs at least a month to think things over. It’s a complicated decision with a lot at stake,” O’Bryan said. I know of no other circumstance in which insurance decisions are that tightly controlled by the calendar. They need time to sit with a banker and an agent because they’re locking in coverage for crops that won’t even be planted until May and June. Other parts of the country have later sales-closing times. The rules are different depending on where you’re farming, and I don’t understand Florida’s deadline. It used to be March 30, 20 years ago. Back then, prices were announced in December. This is the situation that all row croppers face here in our state.”

O’Bryan’s other main concern has to do with a recently developing conundrum in the after-planting period of the farmer’s season.

The federal government recently extended the deadline by which the Farm Service Agency had to certify, for USDA, the planted acreage of farmers. That deadline was extended in recognition of the staffing challenges that can come along when workers must be quarantined because of COVID-19. But, the feds didn’t extend the deadline by which farmers have to certify their acreage in crop insurance paperwork.

The FSA deadline and the farmers’ deadlines need to match because their crop insurance paperwork must match FSA’s paperwork. FSA’s documents are extremely detailed, and farmers depend upon that data to make sure all is in order on the insurance side. There are serial numbers for the overall farm, and field identification numbers for each parcel he plants, and tracking numbers for groupings of land involved in his operation. If their paperwork doesn’t exactly match what FSA has certified, trouble ensues for the farmer.

“It causes chaos,” O’Bryan said. “Farmers don’t have that kind of detail in their heads. A farmers operation might be composed of 50 different fields, and farmers generally don’t think in that language. FSA helps get that on paper for them, and it’s pretty detailed stuff. If they get it wrong when they bring it to me, it’s not a good thing and it can have costly consequences. If they’re going to move one deadline, they need to move the other, and it’s just that simple. I think this was just an oversight, not anything malicious, but if we’re stressing participation in crop insurance, we’ve missed the boat here,” O’Bryan said. “Don’t get me wrong: In many, many ways USDA has done a great job in its programs. These things just need to be tweaked.”

He said he felt some optimism after the town hall meeting, noting that USDA panel indicated a willingness to listen and to work toward changes ultimately deemed appropriate.

A family from Cottondale will compete on Family Feud tonight. Check local listings for time and channel.

A family from Cottondale competed on "Family Feud" Tuesday night and, although they lost in that go-round, they’ll be back for another try aga…

A fund has been established to assist 19-year-old Alford-area resident Lillie Livingston, seriously injured in a Feb. 16 head-on crash with a …

The following people were booked into the Jackson County jail during the latest available reporting period, Feb. 20-23:

The Florida Highway Patrol reports the Thursday death of a pedestrian on a roadway in Jackson County.

The following people were booked into the Jackson County jail during the latest available reporting period, Feb. 24-26:

Eric O'Bryan talks about things he'd like to see USDA change in the crop insurance program.