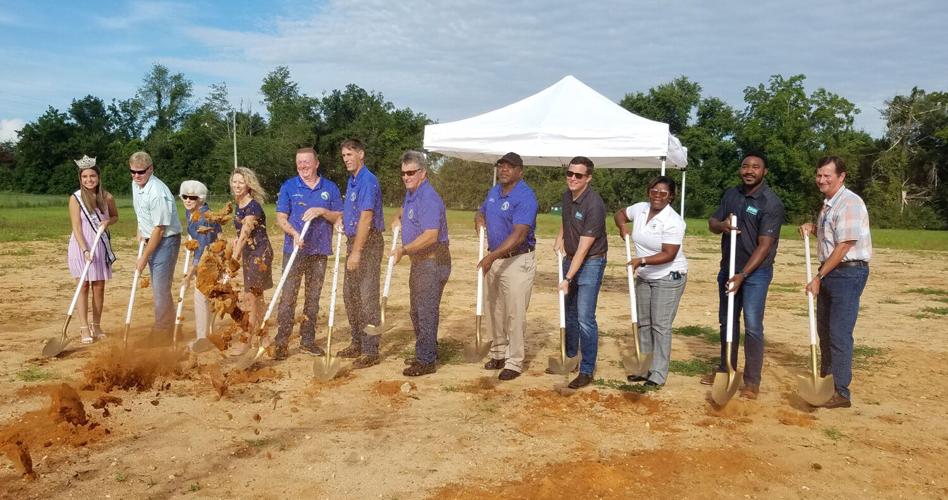 Wayne Malloy II and his mother, JoAnn Clark Malloy, second and third from left, were on the groundbreaking team that turned earth Monday to signal the start of infrastructure installation to serve a new Chick-Fil-A in Marianna on three acres the Malloy family held on State Road 71 South. 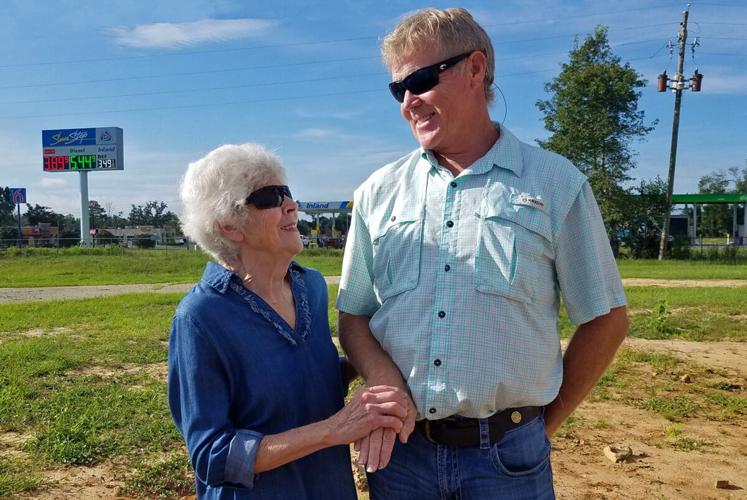 After a groundbreaking ceremony, JoAnn Clark Malloy and son Wayne Malloy II stand together on a three-acre site the Malloy family owned for many decades that is now the future site of a Chick-fil-A restaurant, Monday, July 25, 2022, in Marianna.

After she and her family decided to sell three acres of their old gladiola farm off State Road 71 in Marianna to make way for a new Chick-fil-A, 78-year-old JoAnn Clark Malloy rode out and just sat a while near the farm’s headquarters.

The white and blue building had sat empty since she and her husband, the late Wayne Malloy, reluctantly closed the farm in the 1970s. They’d never been able to bring themselves to tear it down. It had, many years later, been heavily damaged in 2018’s Hurricane Michael, but that didn’t obstruct the precious memories that flooded Malloy’s senses. Accepting the pending demolition of the building and the final closure of an era was perhaps made easier in realizing that the new realities could not erase the joy of the old days.

Sights and sounds came back as if they’d been things of yesterday, not yesteryear.

She’d come into the business as the young bride of Wayne Malloy, the son of the gladiola farm’s founder Dallas Malloy. She and her husband made their first home in a small house right there on the farm property. And she went to work in the business office while her husband toiled in the fields — a working ground that encompassed roughly 140 acres in production that yielded some eight million glad bulbs a year.

Her son Wayne Malloy II grew up there until the age of 7 and she remembers his early years toddling about on the property and, later, his adult role in the family’s business affairs. He became the farm’s manager, eventually, and remembers his mom easily putting in 80-to-100 hours a week during harvest time to making sure their customers — flower markets all across the U.S. and Canada — got the things they’d ordered wholesale.

Both remember a special atmosphere at Malloy Glad Farm when they think of the men and women who worked there, and of children in those households that would one day join the ranks, just as Wayne II had done. They had about 90 workers at their busiest times of year. “I will forever be grateful to them,” JoAnn Malloy said. “They were proud, hard-working and dedicated people that were like family to us.”

The two talked a bit about that feeling Monday at a ground-breaking ceremony held to mark the start of work on the infrastructure that will serve Chick-fil-A as it opens one of its restaurants on the three acres.

For the son, the chain’s decision to build here was more than a little satisfying. He’d reached out to the company back in 2009, pitching the Malloy property as a potential site. He didn’t hear back but continued to feel it would be a perfect fit along the SR 71 corridor. More than a decade later, Zach Gilmore, Vice President of Business Development for the Jackson County Economic Development Committee, started running the ball for Malloy and was a key figure in sealing the deal he had envisioned and continued to believe in for all these years.

At Monday’s groundbreaking, Jackson County Commissioners, members of the JCEDC, project engineers and other key members of the project team turned the earth with shovels that had gold-colored spades.

JoAnn and Wayne Malloy II were also on that groundbreaking team for the roughly $1 million infrastructure project. Mrs. Malloy’s hard-working hands had no trouble grasping and lifting her shovel several times to send scoops of dirt into the air.

On April 8, Governor Ron DeSantis awarded Jackson County $994,712 through the Rural Infrastructure Fund, which was obtained through a successful grant application written by DHM Melvin Engineering.

The location is expected to open in late 2022 or early 2023 depending on factors that affect construction such as supply procurement and weather delays.

And the sale of this three acres won’t mean the Malloy’s are walking away: The family retains 250 acres in the area and Wayne II remains committed to making sure the fits are right if the family sells more property. They’ve only let go three acres before this — that went to the Sun Stop/Inland station that opened not so long ago next door to where Chick-fil-A will set up shop.

Hope Springs Counseling Group provides mental health counseling and mental health training for clients in Jackson County and surrounding communities. In the press release, officials described Hope Springs as “a local team that works to help individuals, couples, and families move toward mental, emotional, and behavioral wellness. Hope Springs’ mission is to provide quality mental health care that will allow positive, forward movement in life’s journey with decisions that are in line with personal values and beliefs,” the release continued. “The counselors at Hope Springs can help map out a path for wellness that includes healthier thinking, more peaceful emotions, and self-controlled choices. To make an appointment with a therapist at Hope Springs Counseling Group or for more information… call 850-372-4663 or visit hopespringscg.com.”

For more information, contact the Jackson County Chamber of Commerce at 850-482-8060 or info@jacksoncounty.com.

The Jackson County Economic Development Committee, the Jackson County Board of County Commissioners, the city of Marianna and DHM Melvin Engineering recently announced a groundbreaking set for Tuesday, Aug. 9, at 8 a.m., to mark the beginning of construction on the first building to be completed in the Endeavor Industrial Park.

DHM Melvin Engineering, on behalf of the Jackson County Board of County Commissioners, obtained a Community Development Block Grant of $2 million and a US Economic Development Administration Grant of $2.6 million to build an approximately 30,000 sq. ft . facility at the Endeavor Industrial Park to support manufacturing growth and boost county economic diversification and resiliency efforts. The city of Marianna obtained a Rural Infrastructure Fund Grant to extend water, sewer and natural gas to the proposed facility and construct a road. Although the potential tenant of the structure has not been named, Melvin has said it is an outfit that manufactures aluminum parts.

For more information, contact the Jackson County Economic Development Committee at 850-633-2203 or executive@jacksoncounty.com.

The following people were booked into the Jackson County jail during the latest available reporting periods, Aug. 5-6 and Aug. 8:

A 19-year-old Marianna man died in a single-vehicle crash early last Saturday morning in Jackson County, according to a press release from the…

A strategy to help get hydrilla and other weeds under control in Merritt’s Mill Pond will begin Aug. 29 and continue into September, the Jacks…

Jackson County celebrates its 200th birthday with a festival on Saturday, Aug. 13, from 10 a.m. to 6 p.m. on the grounds and inside buildings …

The following people were booked into the Jackson County jail during the latest available reporting periods from Aug. 2-4:

Read blueprints, know enough about Computer Aided Design (CAD) systems to do some designing with it, frame the walls and wood floors of a hous…

From the Floridan archives: 1974

The annual Peanut Field Day in Jackson County is set for Thursday, Aug. 11 at the North Florida Research and Education Center at 3925 Highway …

Sunland resident Bruce Griffin Jr., 27, has been arrested on a charge of Battery on Commitment Facility Staff, according to a Marianna Police …

Wayne Malloy II and his mother, JoAnn Clark Malloy, second and third from left, were on the groundbreaking team that turned earth Monday to signal the start of infrastructure installation to serve a new Chick-Fil-A in Marianna on three acres the Malloy family held on State Road 71 South.

After a groundbreaking ceremony, JoAnn Clark Malloy and son Wayne Malloy II stand together on a three-acre site the Malloy family owned for many decades that is now the future site of a Chick-fil-A restaurant, Monday, July 25, 2022, in Marianna.