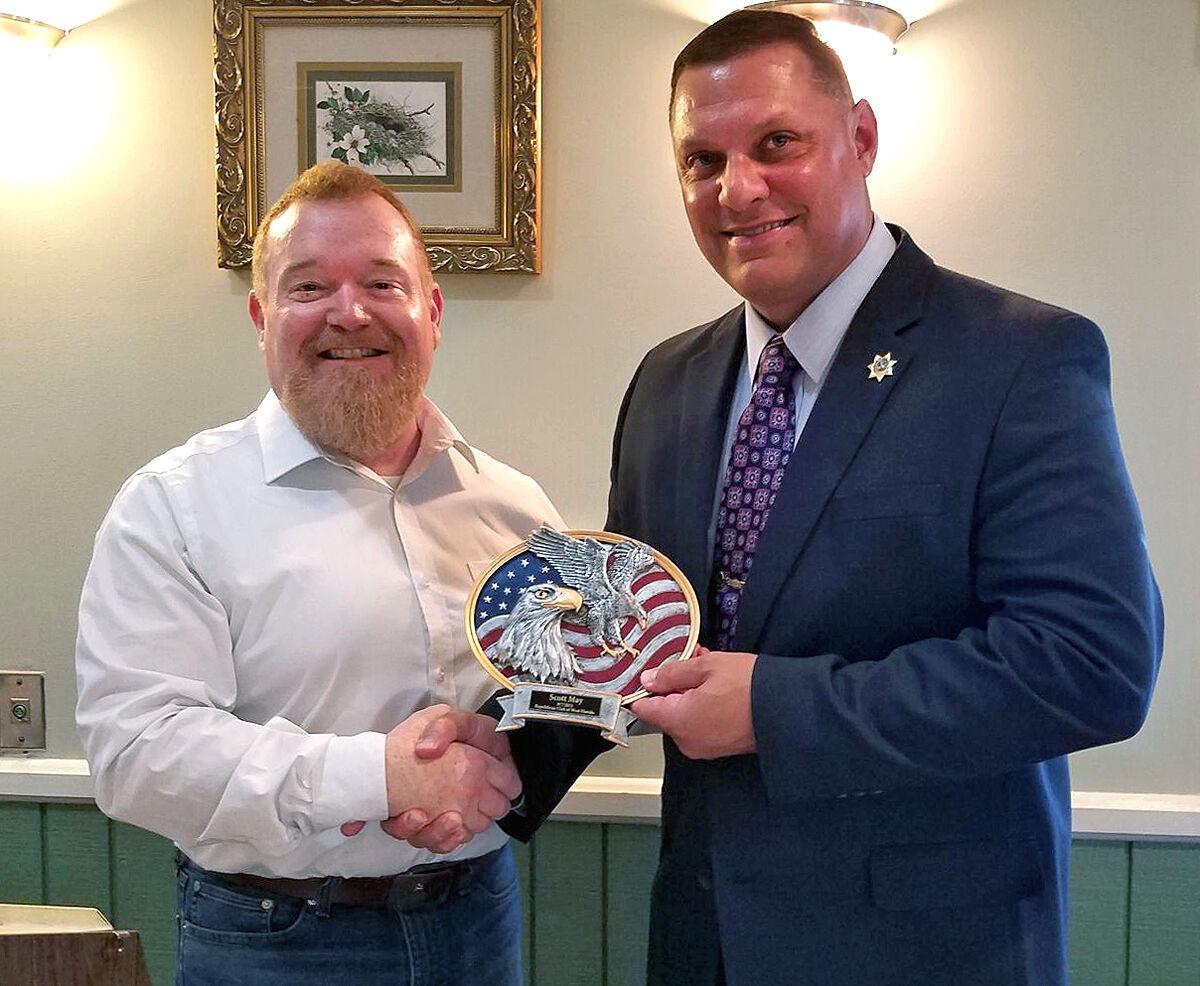 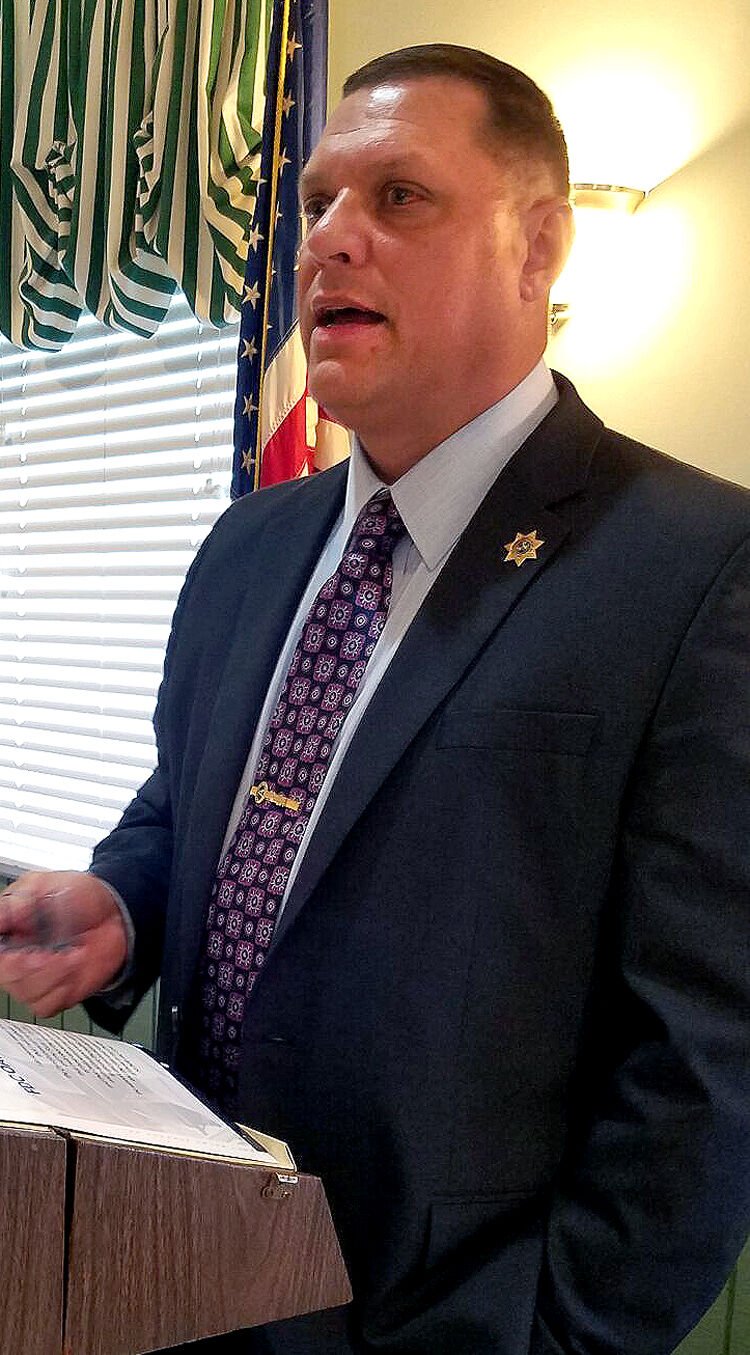 Jackson Correctional Institution Warden Scott May speaks to the Republican Club of West Florida on Tuesday.

Warden Scott May is leading an innovative mission at Jackson Correctional Institution (JCI) — it’s the first of its kind in the state prison system and also the first in the U.S.

Before he talked about that key topic, Tuesday’s guest speaker at the monthly Republican Club of West Florida meeting, fielded some questions.

May was asked during the session about rumors of ongoing prison closures in the state, and, while he said there are few certainties about that, he also made this comment: “There’s unofficial talk about a couple possible, but I can tell you now it’s not in Jackson County.”

He covered a lot of other ground, including the transition from 12-hour to 8.5-hour shifts for prison workers, the incentives staff members are being offered for recruiting others to work for the system beset by shortages at many facilities, and about hopes for salary improvements.

May then outlined the Malone facility’s new mission: It has been assigned to carry out a first-of-its-kind program in the United States. JCI is 10 months into it.

It’s part of an innovation of Florida Department of Corrections Secretary Mark Inch, who took over that job in January of 2019 and implemented a new way of managing prison populations.

In it, some of the most troublesome inmates are now housed together in Administrative Management Units (AMUs) to be created at certain facilities. Jackson CI is the first and still the only one of those, not only in the state system, but the United States as well.

Conversely, some of the best-behaved offenders with no violent history can either be placed immediately or earn placement in “incentivized” prisons, where they would be exclusively in the company of likewise non-violent offenders.

JCI was chosen to institute an AMU, essentially a prison-within-a-prison that houses some of the most troublesome. It was created at JCI last November, roughly three months after Inch instituted the new population-management program.

According to Florida Administrative Code, an AMU “refers to a general population housing status where an inmate is placed in a highly structured environment to promote the safety and security of inmates, staff, and the public, or the security and good order of an institution. Placement in an AMU is the consequence of an inmate’s inability to live within an institutionalized setting without abusing the rights and privileges of others by committing, or instigating others to commit, violent, disruptive, predatory, or riotous actions, or an inmate’s behavior that poses a threat to the security of an institution.”

JCI has always housed some of the toughest inmates, but previously they mixed with the general population, where non-violent offenders were subject to their influence, the danger they posed, and the risk of becoming violent career criminals themselves as they changed in negative ways to survive the environment.

A native of Jackson County’s Cypress community — his father owns May’s Towing — Scott May started his prison career with stints in Calhoun, Holmes and Jackson County-based prisons. He was the assistant warden at Apalachee Correctional Institution for roughly four years, then went on to take over as warden of a facility in Walton County.

He said he’s glad to be back on his home turf and that the program is working well. He further said he sees great promise in the housing program instituted by Inch. The prison system is now implementing its seventh “incentivized” prison site.

He said roughly 90 percent of prisoners will leave those facilities return communities outside those walls. The new program, it’s hoped, will let many more of them return to become productive citizens because they were sheltered from violence inside and mentored for that return.

The Florida Highway Patrol has issued an update regarding an Aug. 7 Bay County crash that resulted in the death of a 25-year-old Greenwood wom…

Rutabaga Café in Chattahoochee opened a little more than six years ago at 23 Jackson Street, in the little house where chef and co-owner Billy…

A hit-and-run driver is being sought by authorities in connection with a Malone traffic incident that left a pedestrian critically injured.

The Jackson County Chamber of Commerce has hired Meghan Gilliland Basford to oversee the Main Street Marianna program as its executive director.

The following people were booked into the Jackson County jail during the latest available reporting period, Sept. 15-17:

The following people were booked into the Jackson County jail during the latest available reporting period, Sept. 11-14:

Jackson County Commissioners were scheduled to have their first public hearing at 5:30 p.m. on Tuesday regarding the proposed property tax rat…

Jackson Correctional Institution Warden Scott May speaks to the Republican Club of West Florida on Tuesday.