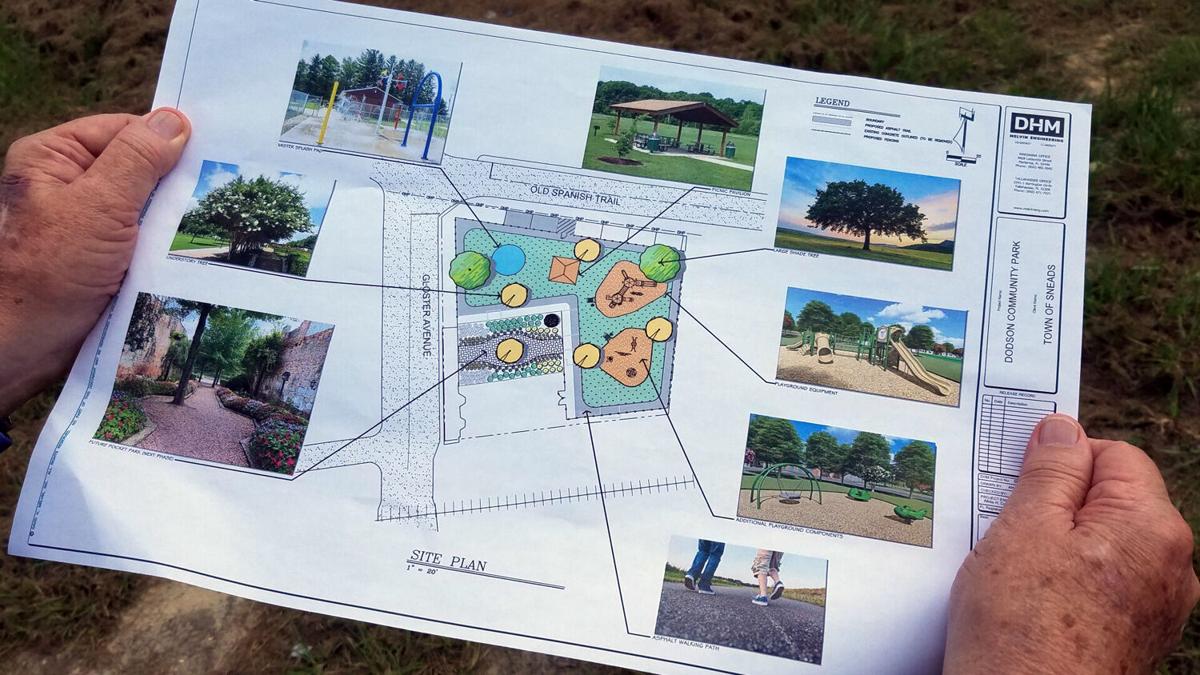 This is the general plan for improvements to a donated block of land and a structure there that the town of Sneads wants to turn into a showcase. 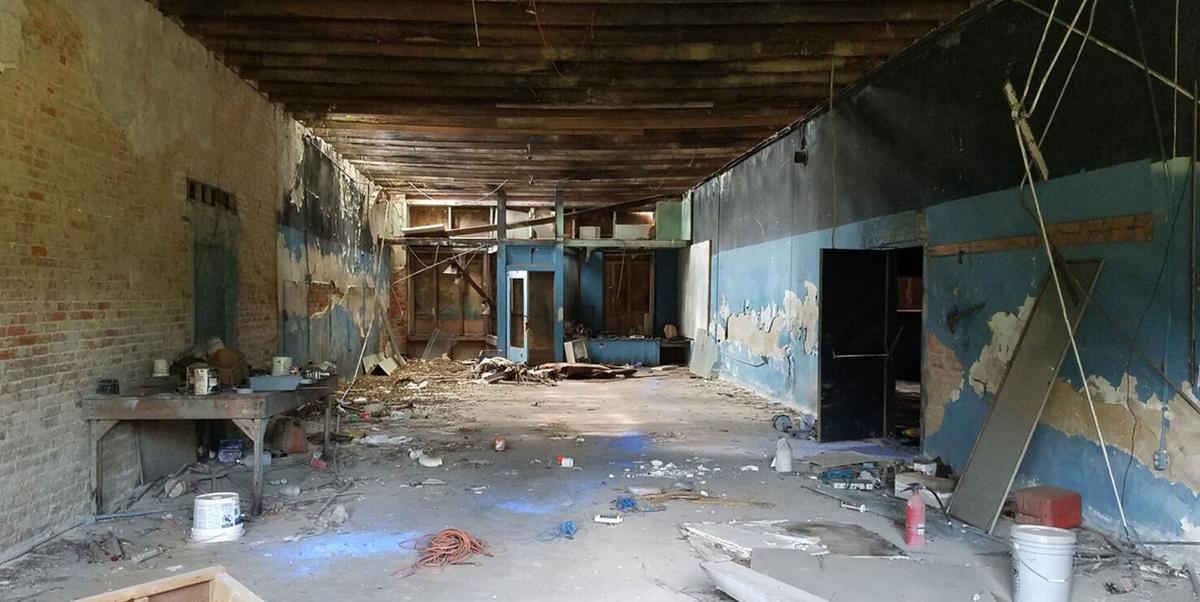 The town of Sneads plans to seek funding for the renovation of this donated building in the old business hub of town. This interior shot of the old mercantile shows the potential and the challenging work that has to be done. 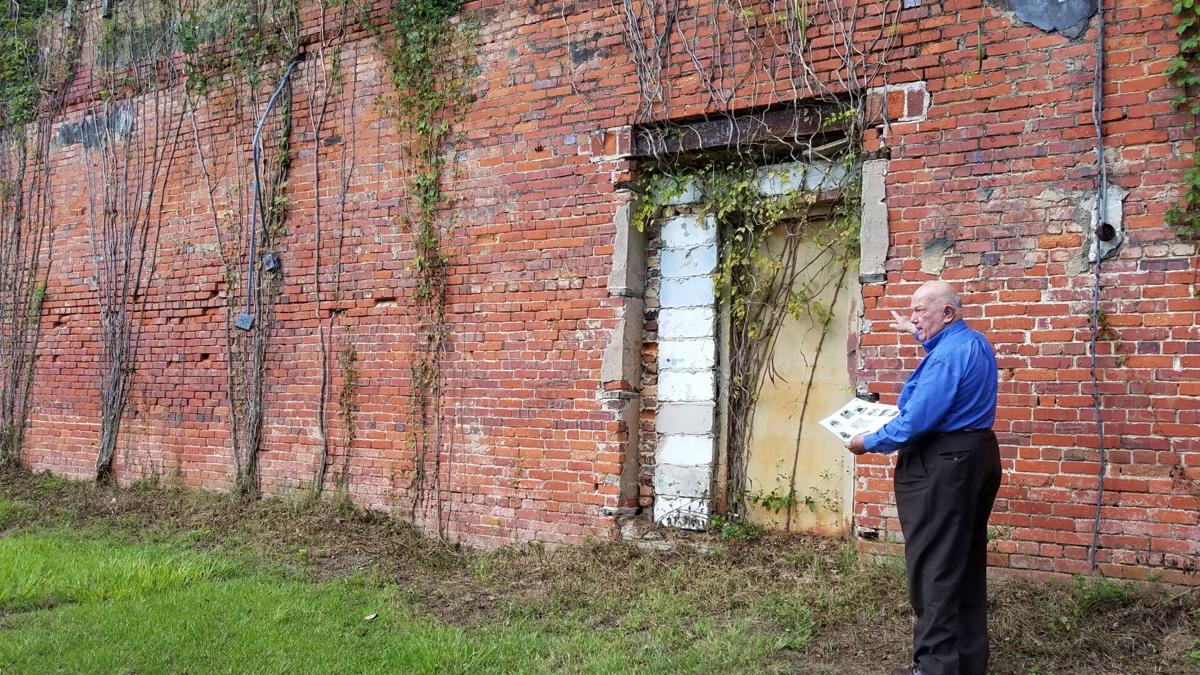 Sneads Town Manager Lee Garner points out some plans being made for the renovation of this donated building in the old business hub of town. Garner said the brick exterior is a feature the town hopes to keep in place as a feature of the structure. 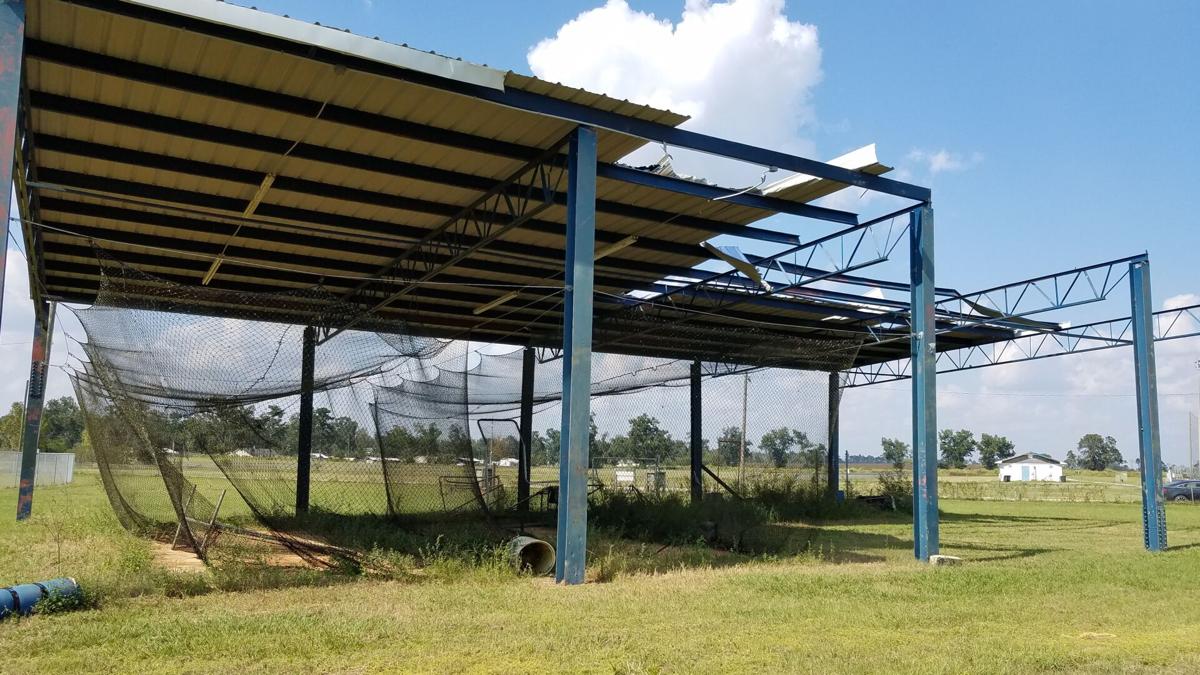 This batting cage structure in the Sneads sports complex needs repair, thanks to Hurricane Michael. 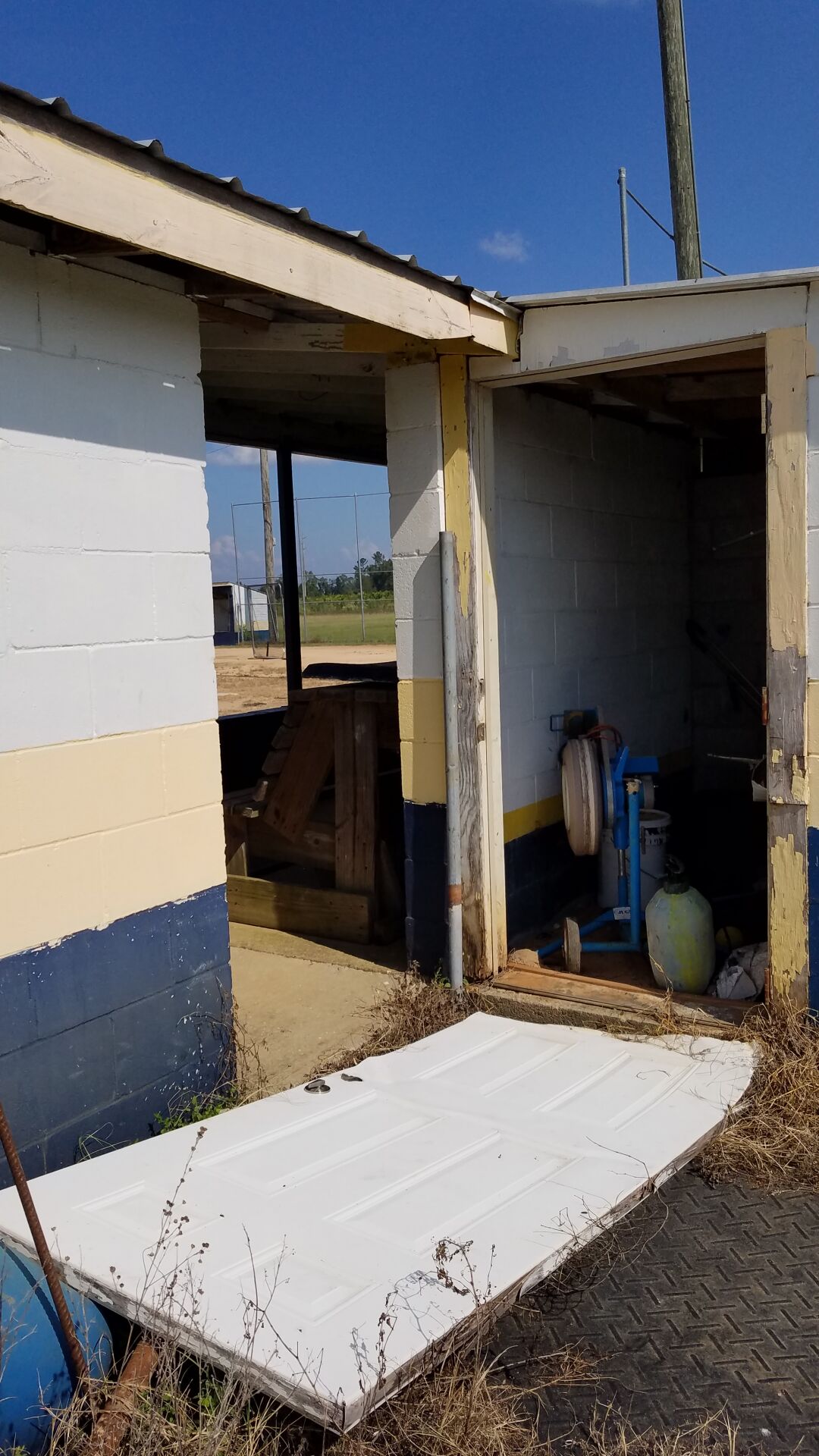 Hurricane Michael knocked down this dugout door in the Sneads sports complex. 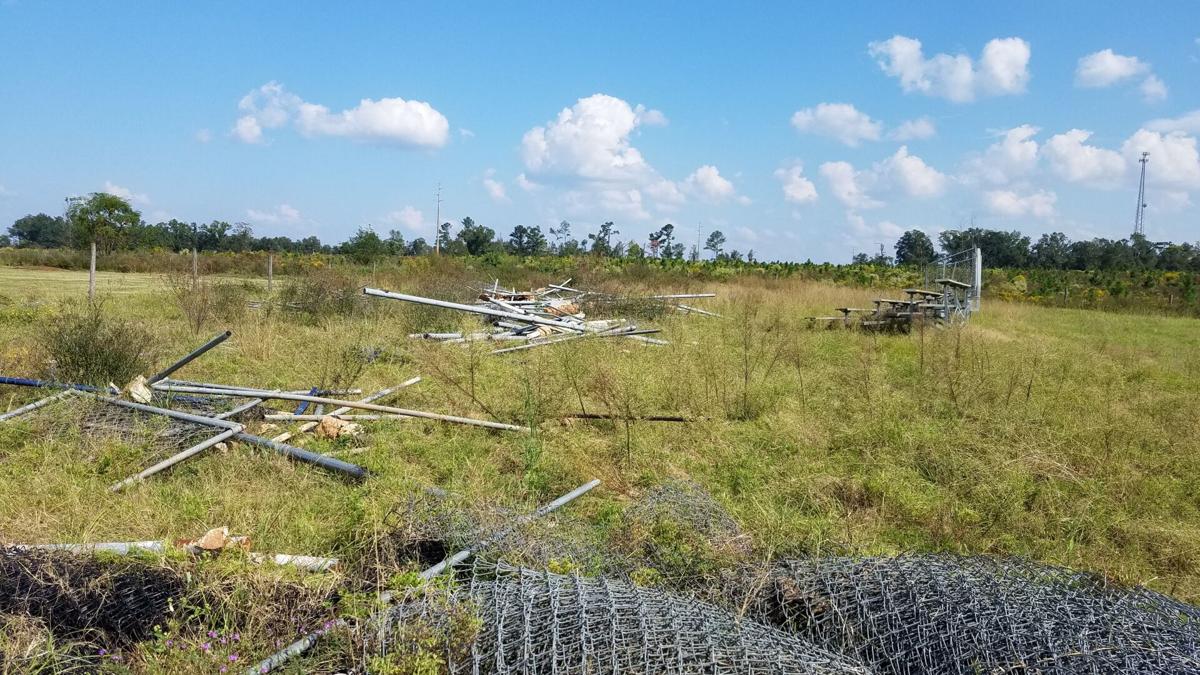 These scattered support poles for the fence around a ball field in the Sneads sports complex are among the damaged assets there.

Special to the Floridan

Former Chattahoochee city manager Lee Garner has been hired into a similar position just across the Apalachicola River, taking over as the town manager of Sneads in late August.

Garner says he plans to issue a monthly report on town business to keep the public more informed, something he says has been perceived as lacking in recent times, a situation he hopes to remedy as he steps in.

His first report focused on the Sneads Town Council meeting of Oct. 13.

In that session, the board tackled several pieces of business across a wide range.

Two of those involved changes that, together, are expected to increase the town’s income by almost $50,000 a year.

In one of those matters, the Council members approved a negotiated amendment to its sewer treatment agreement with the Florida Department of Corrections, a contract under which the city treats waste from the Apalachee Correctional Institution.

The amendment, overdue, Garner said, will let the city realize an income increase of $22,000 to $24,000 annually as the treating facility. The per-thousand gallon treatment fee went from $4.32 to $5.18 under the new terms.

In the other income-increasing action item, the Council authorized an agreement with T-Mobile for the installation of certain T-Mobile communications equipment on the town’s elevated well. That company will pay the town monthly rent of $1,800 for the right, coming to a $21,600 annual total.

Council members also dealt with several grants-related items in an effort to gain funding for infrastructure, quality-of-life projects and more.

On the quality-of-life front, the board authorized Garner to submit a grant request to the Florida Recreation Department Administration Program (FRDAP), seeking $200,000 to help the town build out a park-and-recreation area on a block of property in the old business center of town, land that was donated by the Dodson family in 2016 on the condition that it be used for such purposes. The property is located off Glouster Avenue, near Old Spanish Trail.

Garner said that, in planning for the space, he envisions renovating and repurposing what’s viable of the remaining building there into a museum/arts and community center that could honor local history for the enjoyment of residents and that might also draw visitors off the interstate to explore the area.

Council members also approved a new golf cart ordinance which will allow the carts on designated city streets (not busy U.S. 90), if they meet state code requirements and are property registered with the Sneads Police Department. The ordinance does not apply to ATVs or other such vehicles. Anyone desiring further information about registration requirements can contact the police department. A registration fee of $30 is to be paid for the first year of applicability, and $25 will be charged for ensuing years for each registered cart.

The board also approved an amnesty period for the free disposal of certain non-hazardous waste, white goods and other items, including up to four tires per resident, during the business-day period of Nov. 4-6 and from 8 a.m. to noon on Saturday, Nov. 7. Bins will be located at the maintenance yard south of the Railroad on Third Street. Proof of residency will be required. No batteries used oil or paint will be accepted.

In other action, the Council also authorized Garner to have three streetlights installed on dark Dairy Road.

In that meeting, the board also heard a presentation from Alton Brock, a FEMA consultant, regarding bids received for a project to make repairs to the town sports complex which was damaged in Hurricane Michael. Bids received for major repairs were received from two companies, and the low bid of $179,000 was awarded to C&C Construction. The major repairs will be to the dugouts, pavilions, and backstops in the complex. The town has received a FEMA funding commitment for this work. In another sports complex project, the town also has FEMA funding for a study to be performed by MUSCO Lighting in guiding the town’s quest to replacing lighting there. The Council on Oct. 13 authorized Garner to commence with that contract.

The town also awarded C&C Construction another job related to the storm. It had been the only one to submit a bid on a project to repair storm damage that occurred in the town’s Police/Public Works/Tax Collectors/ Emergency Management complex , and its offer of $78,500 to do the work was accepted.

The Council approved the purchase of a 24-by-48-foot pole barn to be erected at the wastewater treatment plant off Ham Pond Road in the amount of $3,499, to be purchased from Beauchamp Hardware and Supply. Garner said Hurricane Michael destroyed two pole barns there, and that at least one will be needed to protect equipment of the contractor that will be making repairs to the plant over many months’ time.

On that subject, Council members awarded a contract to Tip Top Construction of Havana in the amount of $944,469.67, to make repairs to the plant in damage caused by Hurricane Michael. That company won out over four other bidders, offering the lowest price. Electrical, structural and pump repairs will be necessary, Garner said.

Council members also authorized Melvin Engineering to apply on the town’s behalf for funding from various agencies to make storm water collection system repairs that had been identified as needed in two previous studies, one in 2013 and one in 2017.

Garner said an estimated $3-4 million will be needed on that project. He said he’ll also personally be reaching out to the local Florida legislative delegation and U.S. Congress members for additional assistance in concert with the Community Development Block Grant that Melvin’s firm will be seeking.

The board also authorized bid requests to be prepared and issued for repair work to be done on the town gazebo and the nearby health department building, both those having been damaged in the hurricane.

The Council also changed its regular meeting time from 5 p.m. to 6 p.m. each second Tuesday of the month. That hour-later time will be effective starting Nov. 10. The board also agreed to re-open their meetings to live attendance by the public, with social distancing and other CDC recommendations in play going forward. Garner said the 5 p.m. time was determined inconvenient for the public, too early for many citizens who get of work at that hour.

Council members also approved the purchase of a new bush-hogging tractor for the town’s maintenance department, at a price of $44,800, from SunSouth. A down-payment of $15,000 will be made, with the balance financed for three years with Peoples South Bank. Five quotes were received and the lowest price for the new John Deere unit was accepted, Garner said.

In the Oct. 13 session, council members also directed Garner to work with a local citizen about the man’s offer to do as-needed mosquito spraying once he obtains the necessary state certificates he needs to do the work.

The board also directed Garner have a crew fill in the holes that had been created in Sneads Park as the result of damaged trees having been removed after the hurricane. He said that has been accomplished.

Sneads Carlisle Rose Garden Club President Libby Wilkerson requested that the board obtain a grant for repairs to the town’s log cabin, where the club meets. The group, she told council members, is also working on a project to place welcome signs on the North and South entrances to the town, and asked the town for assistance with permitting when the time comes to see that through. The club is also working on a multi-year project to add native gardens at various locations throughout the town and wants the support of the town government on that project as well.

Emanuel Purdee Johnson, WWII Veteran and former resident of Marianna, celebrated his 99th birthday with family and friends in Tampa.

The Mary Gregory Haunted Garden on Putnam Street in Marianna opens next Monday, Oct. 26, for free enjoyment day and night through the day afte…

The following people were booked into the Jackson County jail during the latest available reporting periods from Oct. 17-20:

Due to COVID-19 restrictions, instead of hosting their annual Students Aspiring for Excellence Banquet, the Jackson County Youth Council of th…

From the Floridan archives: 1980

A look back at local history, through the Jackson County Floridan archives.

Drugs on porch lead to charges for Marianna man

The Marianna Police Department reported in a Wednesday press release the arrest of Armond Lorenza Miller, 46, on several charges.

The following people were booked into the Jackson County jail during the latest available reporting period, Oct. 21-23:

This is the general plan for improvements to a donated block of land and a structure there that the town of Sneads wants to turn into a showcase.

The town of Sneads plans to seek funding for the renovation of this donated building in the old business hub of town. This interior shot of the old mercantile shows the potential and the challenging work that has to be done.

Sneads Town Manager Lee Garner points out some plans being made for the renovation of this donated building in the old business hub of town. Garner said the brick exterior is a feature the town hopes to keep in place as a feature of the structure.

This batting cage structure in the Sneads sports complex needs repair, thanks to Hurricane Michael.

Hurricane Michael knocked down this dugout door in the Sneads sports complex.

These scattered support poles for the fence around a ball field in the Sneads sports complex are among the damaged assets there.