Marjorie (Marge) Virginia Haynes Erwin, 96, who lived in Enterprise for many decades, died suddenly on Saturday, July 11, 2020 in Alpharetta, Georgia. She was enjoying a bright sunny day outside her assisted living facility in her motorized wheelchair when she somehow veered off the sidewalk down a steep embankment suffering a fatal head injury. She was an ambassador for her assisted living facility welcoming new residents and had recently been crowned "Queen" of her facility by the residents. Throughout her life she brought joy to those around her. She loved caring for her African violets, playing bingo, watching Atlanta Braves baseball, and talking with people, including her children, grandchildren, and great grandchild. Marge was born on March 22, 1924 in Louisville, Kentucky, the youngest child of Asher Lewis and Ladye Lee (Wilton) Haynes. She married Lt. Howard Erwin on December 10, 1945 in Louisville, Kentucky and subsequently lived in Atlanta, Georgia; Ft. Sill, Oklahoma; Washington DC; Karlsruhe, Germany; and Enterprise, Alabama, where Major Erwin retired in 1959. They opened a business in Enterprise in the 1960s, which they continued to operate until Major Erwin died in 1987. She was a member of the First Baptist Church of Enterprise and served for many years as church secretary. Marge and Howard had three children: Donald Louis Erwin (Julie); Patricia Colleen Erwin McElhany (Michael); and Rosalie Jeanette Erwin Parkey (William). Grandchildren include Allison Ellen Erwin Harton (Marcus) and Alexander Gibbs Erwin; Katherine Grace McElhany Williams (Charlie), John Erwin McElhany, and Caroline Frances McElhany; Brittany Elizabeth Parkey, Sarah Katherine Parkey, and William Grant Parkey. She had one great grandchild: Charlie Michael Williams. Marge lived in Enterprise, Alabama until 2010 when she moved to the Atlanta area to be closer to her younger daughter, Rosalie Parkey, who helped care for her. She is preceded in death by four older siblings: Elizabeth Frances Haynes League (Ralph); Grace Lee Haynes Jenkins (Truman); Dorothy Fain Haynes; and Asher Lewis Haynes Jr. Graveside funeral services will be held at Meadowlawn Cemetery at 11:00 a.m. on Friday, July 17th. Searcy Funeral Home with Dr. Ben Bowden officiating. In lieu of flowers, contributions can be made to the First Baptist Church of Enterprise. You may sign the register book or send condolences to the family at our website: www.searcyfuneralhome.com. 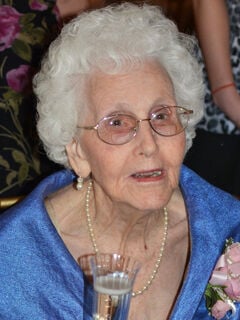 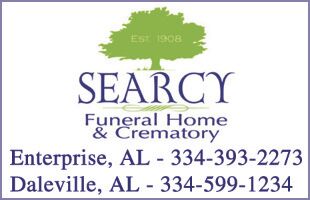