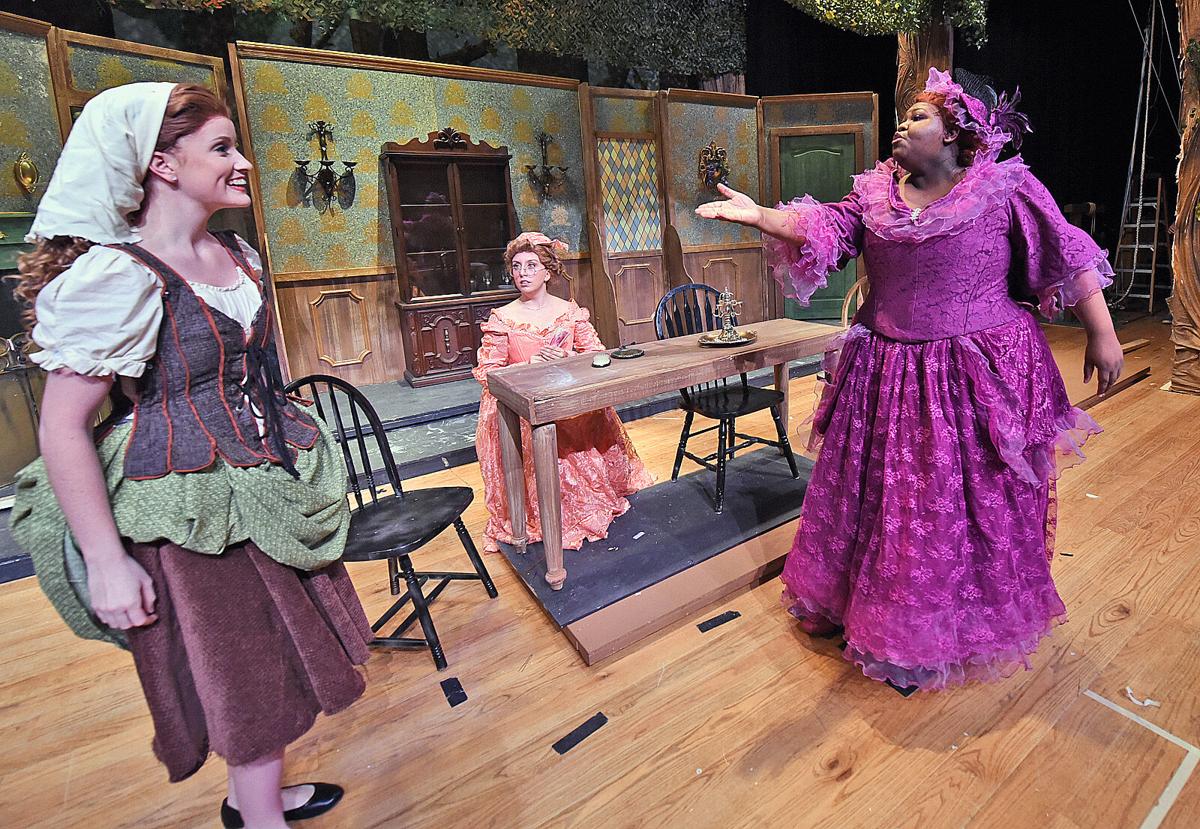 Jessica Saxon portraying Cinderella rehearses a scene with Lauren Beauchamp as a step-sister and Moriah Henry as the step-mother inside of Cherry Hall at Wallace Community College. 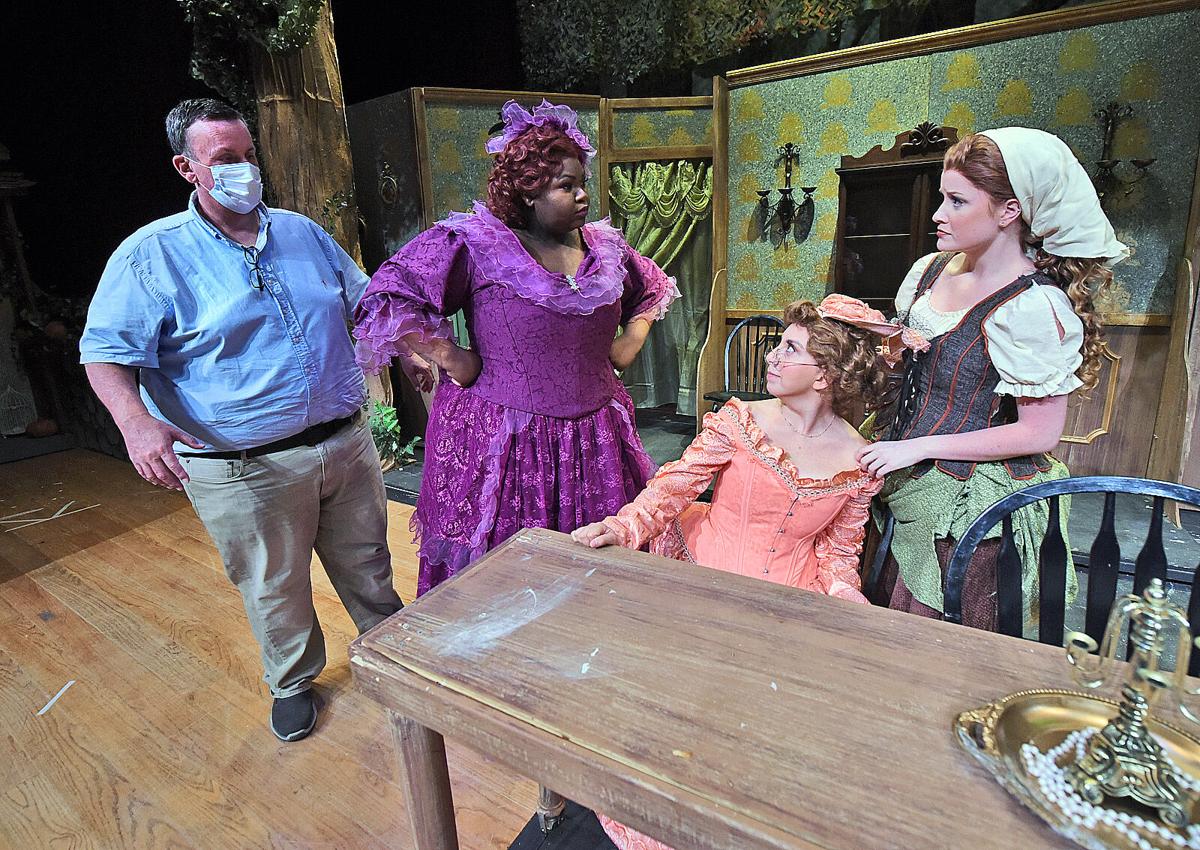 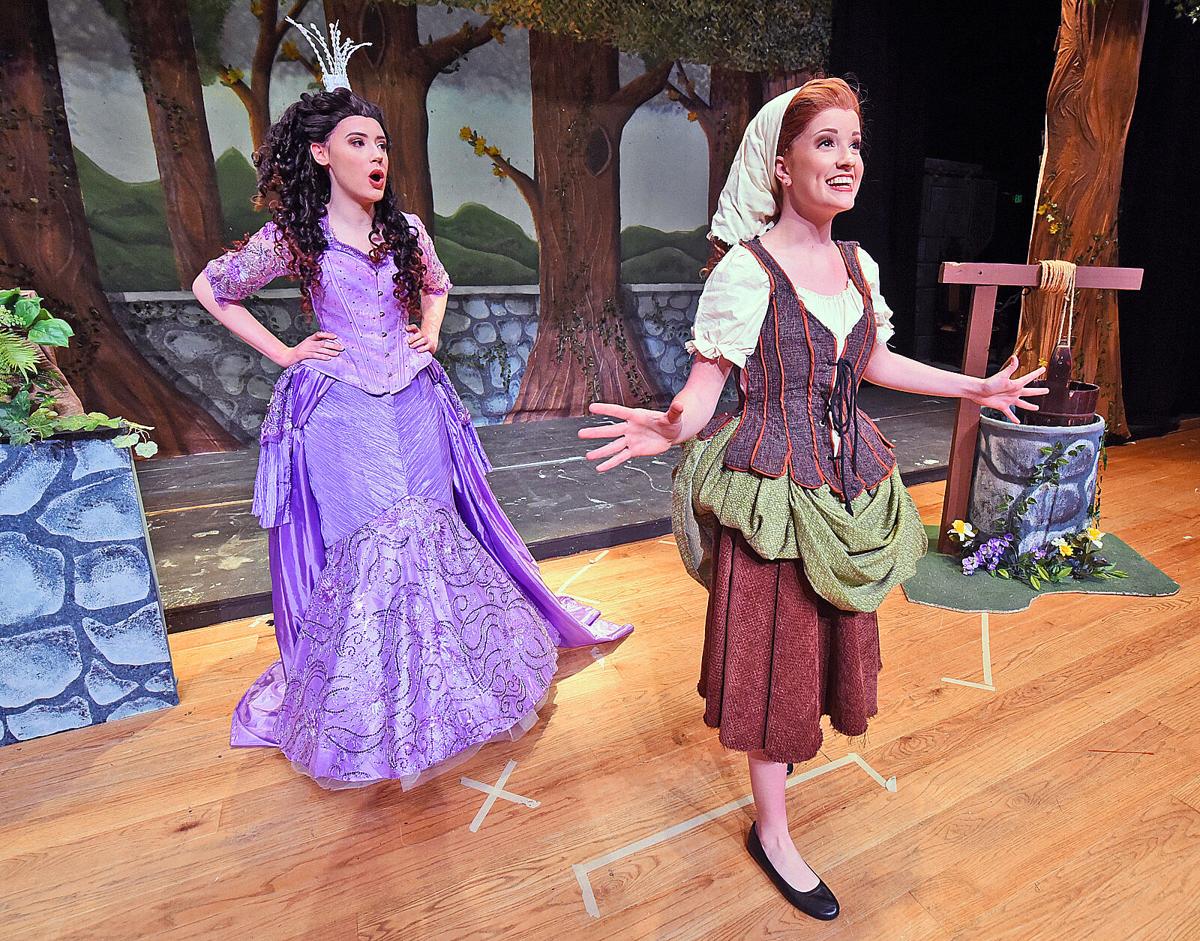 Jessica Saxon, right, portraying Cinderella and Kathrine Keyton as the Fairy Godmother rehearse a scene inside of Cherry Hall at Wallace Community College.

The show must go on – even if it’s a year later with social distancing and masks.

Charles Sirmon had a grand production planned for his first foray as theater director for Wallace Community College in Dothan.

A longtime theater director in the Wiregrass – first at Dothan High School and then at Chipola College in Marianna – Sirmon became the Wallace theater director in January 2020 and immediately began planning a musical production of “Cinderella” for spring. Auditions were held; the cast was chosen; rehearsals were set. Sirmon even reached out to New York theater costume designer and Alabama native Zac West to help with costumes and set design.

Then, COVID-19 shut everything down.

Now, a year after it was originally planned, the Wallace Community College Fine Arts Department will present a musical production of “Cinderella” with grand style – elaborate costumes designed to appear as if they transform on stage and large set pieces of papier-mâché trees and horses and backdrops that move on a track system in between scenes.

It will be, as Sirmon describes it, a “magical surprise.”

The costume transformations themselves take a lot of rehearsal. There’s even a pumpkin that transforms into a carriage.

Such a production, he said, gives students an opportunity to see a glimpse of how professional theater unfolds – building set pieces, acting, working with costumes and beefing up their portfolios. They also learn some important life skills like reporting somewhere on time, having a finished product, and discipline.

“The main goal is just them to become mature, have an appreciation for theater and that appreciation of positivity and of life skills,” Sirmon said.

Sirmon is a Dothan native and comes from a family of educators. He performed theater at Northview High School as a student, moved to New York City to study theater and then returned to Dothan, taking a job at Dothan High School. He spent more than seven years at the old Dothan High building a theater program. He spent 21 years at Chipola building up its theater program. Sirmon said he was ready for a new challenge when the Wallace job became available.

The position appealed to Sirmon not just because he lives in Dothan, but because he felt like it was a chance to help build another program. Wallace, he said, has a great history of theater, but the program was more of a speech theater program until a few years ago.

“I came in on its third year, which was last year,” Sirmon said. “On Jan. 10, we had auditions for ‘Cinderella’ – the Rodgers and Hammerstein Broadway revival musical. And, eight weeks later we were shut down because of the pandemic.”

Sirmon had gone through Hurricane Michael causing damage on Chipola’s campus and forcing a stage production to be postponed. He thought the shutdown due to COVID-19 would end after a few weeks or, at most, a few months.

But it would be a full year before “Cinderella” would see the lights of a stage. New cast members had to be found for some roles because students graduated and left the area.

Sirmon wanted to get the production up and running for the remaining student cast and crew.

“This would be their last year at Wallace, and I thought they have worked so hard, we’re going to get this out there,” Sirmon said. “Somehow, we are going to make this happen.”

What: Rodgers and Hammerstein’s “Cinderella”

Matt Damon hopes Ben Affleck and Jennifer Lopez are back together

Matt Damon hopes Ben Affleck and Jennifer Lopez are back together

Receive the latest in local entertainment news in your inbox weekly!

Jessica Saxon portraying Cinderella rehearses a scene with Lauren Beauchamp as a step-sister and Moriah Henry as the step-mother inside of Cherry Hall at Wallace Community College.

Jessica Saxon, right, portraying Cinderella and Kathrine Keyton as the Fairy Godmother rehearse a scene inside of Cherry Hall at Wallace Community College.