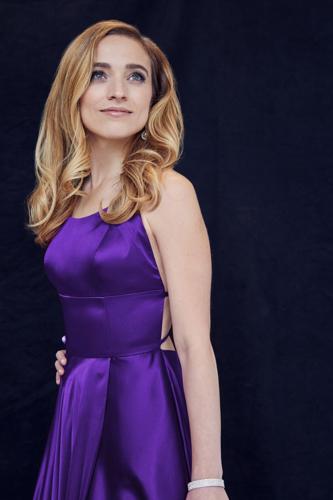 Christy Altomare is one of four women who appear in "Disney's Princess: The Concert," singing songs from the company's hit animated films. She created the role of Anya in Broadway's "Anastasia." Christy Altomare, second from left, is one of four performers singing the songs of the Disney princesses in "Disney Princess: The Concert." Adam J. Levy sings the prince roles in "Disney Princess: The Concert," a show that covers many of the hits from Disney's animated films.

The animated film may have been released by 20th Century Fox but the Disney studios bought Fox, bringing her into the fold.

For the touring production of “Disney Princess: The Concert,” she’s considered one of the faithful – which makes Christy Altomare, one of the show’s stars, more than pleased.

“I grew up with Ariel…she was my No. 1,” Altomare says. “It was like she was the only princess for a while. And then it was Jasmine and then it was Belle.” And then, thanks to a hit animated musical, Anastasia became the focus of girls across the country.

When “Anastasia” was adapted for Broadway, the University of Cincinnati graduate was at the right place in her career to join the princess ranks.

Already on Broadway when a reading was announced, she thought she might have an in because a co-star in “Mamma Mia!” was part of the production. An audition, however, didn’t prove fruitful. She couldn’t hit the high note in “In My Dreams.”

“A year later, I got asked to audition again.” The second time, she was told she looked too young.

Luckily, there was a third chance. Altomare had the high note down and wore heels to look a bit older. “The next day, I got the call that I had gotten the part.”

A lot of memories

On Broadway for more than 800 performances, the musical brought Altomare a Theatre World award, a Drama Desk nomination and a legion of fans.

To share her appreciation, Altomare greeted audiences at the stage door after every performance and encouraged others to take a cue from the show and pursue their dreams.

The character, she says, is a great role model. “She represents courage, strength, kindness, moving forward and being an all-around good person when she does it.”

To pass along the goodness, Altomare frequently gave visitors backstage tours. When she saw a child who was particularly thrilled to be part of the magic, she’d say, “Close your eyes,” and she'd pull out a crown and dub the child an honorary Anastasia. “It was really fun to get to do that for kids.”

In return, they gifted her with artwork, stuffed animals, candy and hugs.

The “experience of a lifetime” continues to bring rewards.

Another shot at Ariel

In “Disney Princess: The Concert,” Altomare gets to sing songs from that show and indulge her inner wish to be Ariel. Yup, she sings “The Little Mermaid’s” songs.

With other actresses (who have played the Disney roles on Broadway, in films and at the theme parks), she’s part of a “greatest hits” show that lets them sing classic Disney songs – not as the characters, but as veterans of the world. Broadway actor Adam J. Levy sings the male roles and joins the others for group numbers.

The “Princess” show is a “best of all possible worlds” for a Disney fan like Altomare.

“It was always my dream to play Ariel…I connect with her so much …but even if I don’t play her I get to be her onstage in this version, which is really cool.”

The touring production is also ideal for someone who has two shows which could go to Broadway. In the past year, she appeared in a musical about Dion called “The Wanderer.” It was presented at the Paper Mill Playhouse and played to sold-out houses. The only thing keeping it from moving to Broadway, she says, is theater availability. The second, “Noir,” is based on film noir and features a score by Duncan Sheik. That played Houston and is slated for a workshop in January that Altomare will be a part of. “We’re all hopeful for the future.”

That philosophy served the actress well during COVID.

“I was one of the lucky ones because I had just finished ‘Anastasia,’” she says. “So people knew who I was. I went straight into the teaching sector when all of the gigs I had lined up imploded.”

Teaching, Altomare says, was a way to make money and “provide a service for so many kids who didn’t get to go to prom, who didn’t get to be social, in general. They needed that boost to remind themselves they were on the right path.”

When theater began to reopen, she went back to work and saw how the time off enabled others to write and create shows about their life experiences. “I knew it was going to come back…it was just a matter of time.”

Still, when she returned to the stage (in a show in Boca Raton, Florida), “I cannot tell you how much I was shaking. I had done a lot of virtual things, but to physically be on stage again? It was different.” Since then, Altomare has been with Tony-winning actors who were returning for the first time and they, too, had the same reaction. “They just needed one show to go, ‘OK, I got this.’”

Now, she’s enjoying the “Princess” world and looking forward to creating another role on Broadway.

When she was in “Mamma Mia!,” insiders were blasé about the casting. “It’s like, ‘You’re the 14th Sophie. That’s cool.’ But when you originate a role, it’s a totally different vibe. You definitely feel like you want to do your best. I always said to myself, if I was every put in that position, I would want to have no regrets. So I woke up every morning going, ‘I’m going to do as best as I humanly can with this part.' Some people might say it was obsessively crazy how hard I worked on it. But I think that’s what you have to do. Not everyone is given their moment in the sun.”

Jeremy Renner was trying to save nephew from injury when he was crushed by snowplow, sheriff's report says

"When Renner attempted to stop or divert the Pistenbully to avoid injury to (his nephew), he was pulled under the vehicle by the track and run over," reads the reports.

'Everything Everywhere' tops Oscar nominations with 11. See the list of nominees here.

The multiverse-skipping sci-fi indie hit "Everything Everywhere All at Once" led nominations to the 95th Academy Awards.

Oscar nominations 2023: Here are the major snubs and surprises that have Hollywood talking

There are always a few big surprises and heartbreaks come Oscar nomination morning, but this year's batch seemed to have more than its fair share of shockers — good and bad.

The nominees for the 95th Academy Awards were announced Tuesday in Beverly Hill, California. The best picture nominees include All Quiet on the Western Front”; “Avatar: The Way of Water”; “The Banshees of Inisherin”; “Elvis”; “Everything Everywhere All at Once”; “The Fabelmans”; “Tár”; “Top Gun: Maverick”; “Triangle of Sadness” and “Women Talking.” Best actor nominees are Brendan Fraser, “The Whale”; Colin Farrell, “The Banshees of Inisherin”; Austin Butler, “Elvis”; Bill Nighy, “Living” and Paul Mescal, “Aftersun.” Best actress nominees are Ana de Armas, “Blonde”; Cate Blanchett, “Tár”; Andrea Riseborough, “To Leslie”; Michelle Williams, “The Fabelmans”; and Michelle Yeoh, “Everything Everywhere All at Once.”

'Everything Everywhere' tops Oscar nominations with 11

The sci-fi indie hit “Everything Everywhere All at Once” leads nominations to the 95th Academy Awards with 11 nominations. Nominations included acting nods for star Michelle Yeoh and Ke Huy Quan in a comeback performance decades after he starred in “The Goonies” and “Indiana Jones and the Temple of Doom.” A year after a streaming service won Hollywood’s top honor for the first time, big-screen spectacles dominated Tuesday’s nominations to the 95th Academy Awards with the “Avatar” and “Top Gun” sequels getting best picture nods. Collectively, the best picture nominees have earned more than $1.5 billion domestically so far, which is a record.  The Oscars will be presented March 12 in Los Angeles.

LOS ANGELES -- “Everything Everywhere All at Once” could best summarize Michelle Yeoh these days.

Jeremy Renner says he broke 30-plus bones in snowplow mishap

Actor Jeremy Renner says he broke more than 30 bones in a snowplow accident on New Year’s Day. Renner said earlier that he is recovering at home from what Nevada authorities say were serious chest injuries he suffered when he was run over by his 7-ton plow while helping free a relative’s car on a private road near Lake Tahoe. In social media posts Saturday, Renner expressed appreciation for support and added that “These 30 plus broken bones will mend, grow stronger, just like the love and bond with family and friends deepens.” The 52-year-old two-time Oscar nominee stars in the Paramount+ series “Mayor of Kingstown" and also plays Hawkeye in Marvel’s “Avengers” movies, among other roles.

The AP has ranked the top 25 movies of 2022. See what topped the list, plus fun facts behind the picks.

The Associated Press has unveiled its inaugural AP Top 25 Movies list, a compilation by a truly representative panel of 26 of the U.S.'s smartest movie experts.

DVD REVIEW: Danielle Deadwyler brings history down to basics with 'Till' performance

Even though TV tackled the Emmett Till story last year, there’s something deeply touching in “Till,” the new film that could figure into Tuesday’s Oscar nominations.

Bruce Miller talks to the stars of "The Watchful Eye"

Bruce Miller talks to the stars of "The Watchful Eye"

Christy Altomare is one of four women who appear in "Disney's Princess: The Concert," singing songs from the company's hit animated films. She created the role of Anya in Broadway's "Anastasia."

Christy Altomare, second from left, is one of four performers singing the songs of the Disney princesses in "Disney Princess: The Concert."

Adam J. Levy sings the prince roles in "Disney Princess: The Concert," a show that covers many of the hits from Disney's animated films.