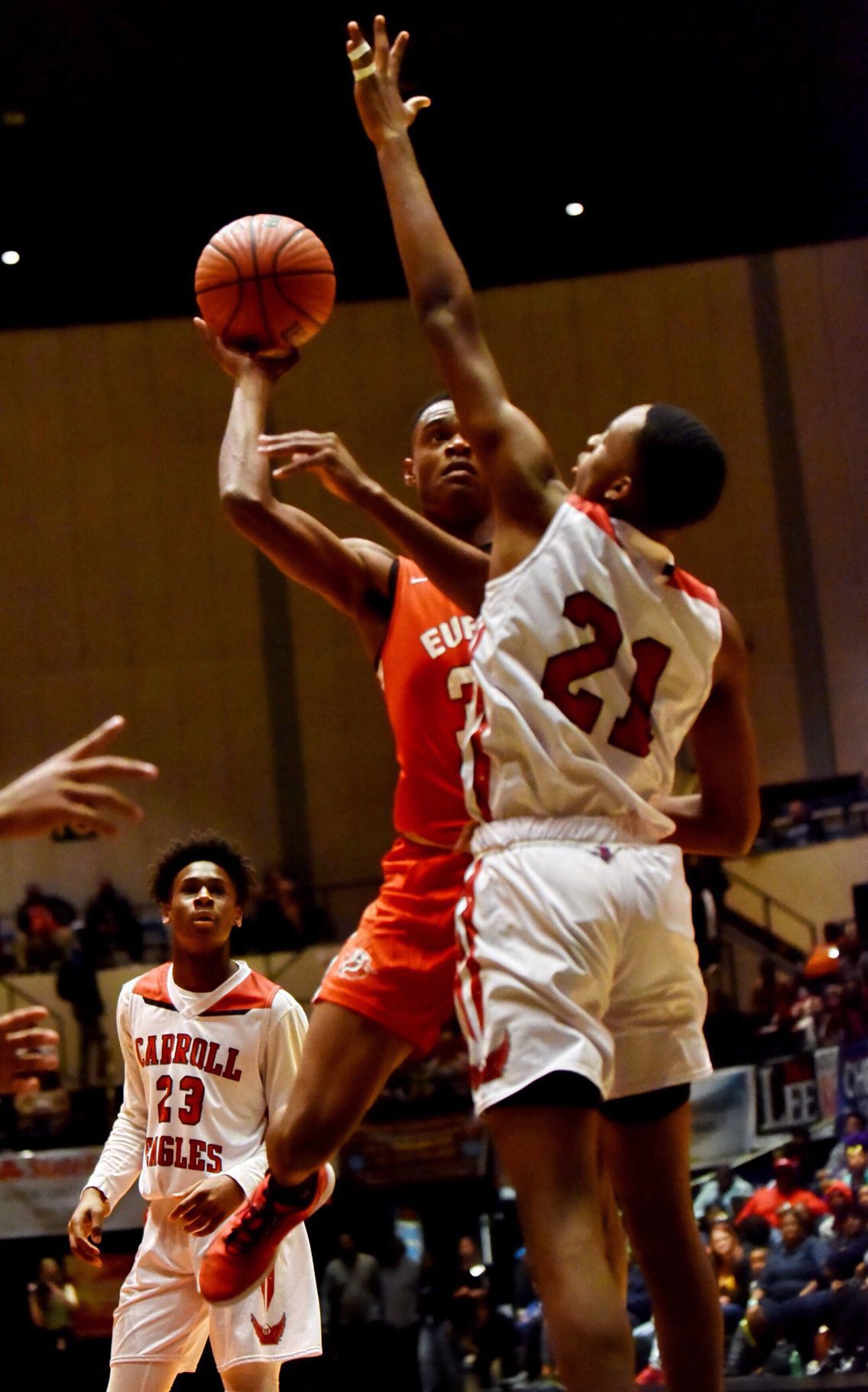 Eufaula’s Eiszeric Thomas hits a jump shot during a game against Carroll High in a semifinal victory at the Downtown Dothan Hoops Classic. 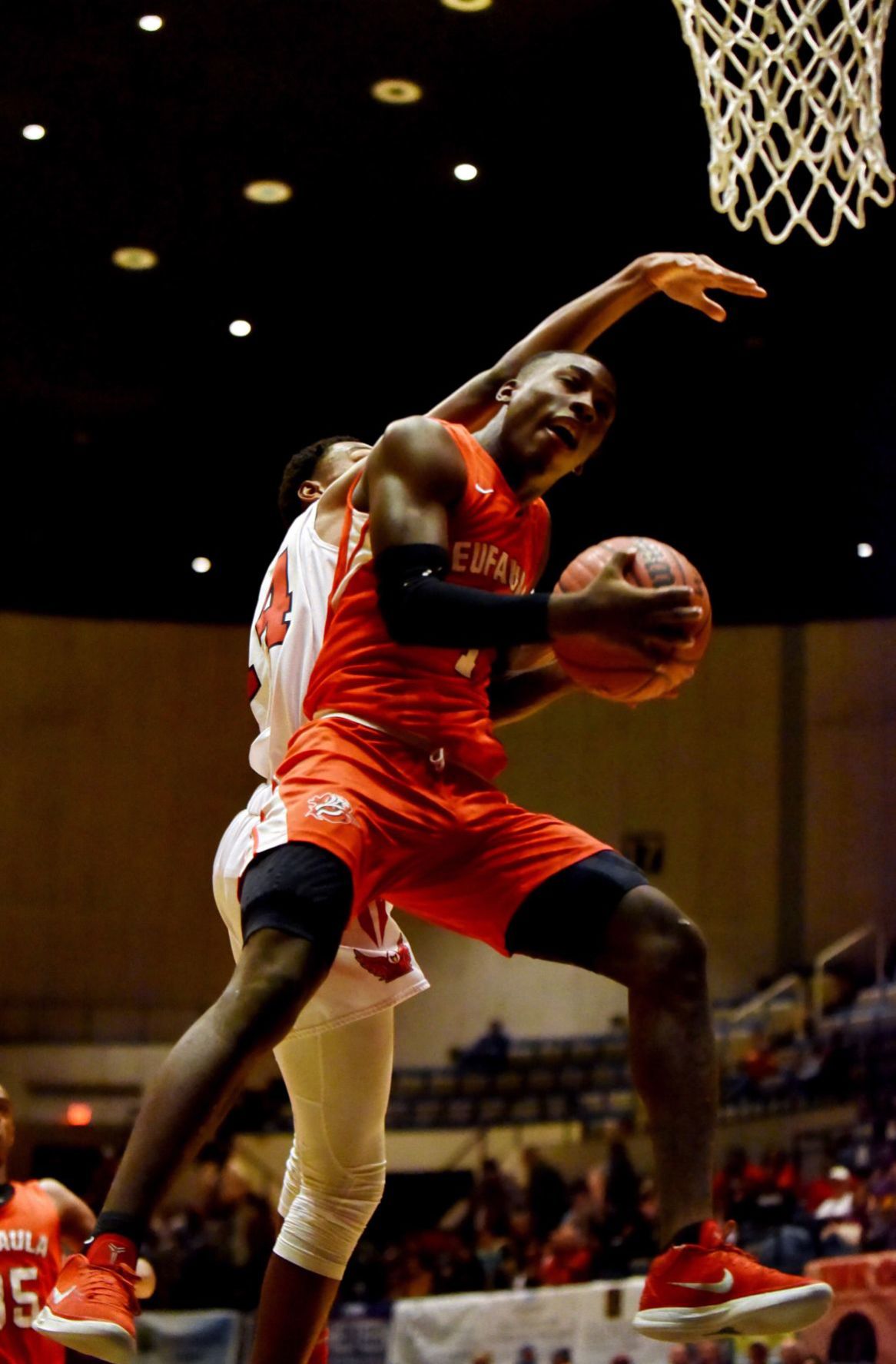 Eufaula’s Jadarious Blackshire goes around a Carroll High defender during the semifinal victory.

It didn’t matter because the Tiger defense was downright tenacious.

Forcing 27 Enterprise turnovers, 17 via Tiger steals, and limiting the Wildcats to 22.4 percent shooting, Eufaula dominated the tournament championship, pulling away to a 59-34 win at the Dothan Civic Center.

In taking the title, Eufaula (12-5) repeated as tournament champion and won the title for the third time in four years. The Tigers also reached the finals in 2017 before losing to Abbeville. They have now won 15 of their last 16 Hoops Classic games.

“This was our fourth year in the tournament and we have won three of the four title games so far and that means a lot,” Eufaula head coach Michael Smith said. “Winning here is always positive. To come down and beat a good (Enterprise) team is huge.”

Eufaula, in winning four tournament games during the week to take the title, didn’t allow any opponent to score more than 34 points in any game. The Tigers won every game by 25 or more points. In addition to the 25-point win in the finals, they won the other three games by margins of 44, 46 and 36 points.

“That was one of our goals — to come down here and play four good games of defense throughout the tournament,” Smith said. “We kept everybody under 40 points. Offensively, we struggled but I am happy with our defense and where we are playing at and the intensity level we are playing at. That will help us win a lot of ballgames.”

After shooting 64 percent, 46 percent and 57 percent in its first three tournament games, Eufaula managed only 35.9 percent on Tuesday (23-of-64), including a 16.7 percent in the first quarter.

The Tigers finished with their second lowest output of the season in points (59), but still won comfortably because of their defense that bottled up Enterprise all night long.

“Tonight was an off night offensively for us we struggled,” Smith said. “It was probably one of our worst shooting nights this season, but we did a good job defensively and that carried us. That is what we have been preaching each and every night.”

Smith credited his players’ effort and intensity for the defensive havoc against Enterprise.

“We have to go all-out on defense,” Smith said. “We can’t have loafs. We didn’t have many loafs (tonight). We had people rotating and helping with constant movement and constant pressure.”

Playing their aggressive man defense behind their athleticism and length, the Tigers clogged up the passing lanes, usually intercepting passes before their destination.

“That is something we do by design,” Smith said of taking away passing lanes. “We try to get into the passing lanes to create the turnovers. We try to anticipate where the ball is going next. Our guys are downing a good job of that.”

Eufaula was especially stingy in the last two quarters, giving up just 13 points after intermission to pull away from a 27-21 halftime lead. Included was allowing just three points in the fourth quarter.

After both teams scored on their first shot of the game, the two struggled offensively for most of the first period. The Tigers missed 10 straight shots and had five turnovers for the next five minutes.The Wildcats had a longer drought, also missing 10 shots and committing six turnovers over seven minutes.

Enterprise’s Josh McCray hit two free throws during the stretch and Eufaula’s Eiszeric Thomas hit 1-of-2 at the foul line as the Wildcats led 4-3.

Thomas ended the Eufaula field goal drought, hitting a shot over two defenders going to his right off the lane, giving the Tigers a 5-4 lead.

Jordan Brown added a 3-pointer for Eufaula with 27 seconds left in the period to extend the margin before Enterprise’s Damarion Holt ended the Wildcat drought with a 3-pointer with 11.0 seconds left, making it 8-7 Eufaula.

Enterprise’s Jared Smith scored on a fastbreak layup to start the second quarter after receiving a nice, cross court pass from Quentin Hayes for a 9-8 Wildcat lead.

It was the last lead of the night, though, for Enterprise as the Tigers scored seven straight to go in front for good.

The teams, though struggling with turnovers, did come to life shooting wise in the second period.

Eufaula hit 6-of-14 in the quarter, including three 3-pointers, to seize a 26-16 with three minutes to go in the half.

Enterprise missed five of its first six shots with four turnovers in the first three minutes before back-to-back threes by Holt ignited the offense midway in the period.

However, the Tigers’ 3-point shooting, including one each from Jadarious Blackshire and Josh Paige, helped Eufaula to its 10-point lead.

The ’Cats finished the half strong, though, with a 5-1 run and cut it to 27-21 with a layup right before the halftime buzzer by Hayes off a nice pass from Josh McCray.

The Wildcats closed the margin to four early in the third, but Eufaula popped the advantage to nine at 32-23 and later increased the gap to 10 at 39-29 with 2:29 left in the third period.

The Tigers continued to pad the lead in the fourth quarter as their defense continued to harass Enterprise. A tip-in by Blackshire off his own missed shot followed by a steal by Thomas that led to a Blackshire layup pushed the margin to 44-31 early in the final period.

Blackshire paced Eufaula with 18 points, hitting 7-of-12 shots from the floor. Caleb Paige followed with 13 and Josh Paige had 12. Thomas chipped in eight points.

Holt was the lone Enterprise player to finish in double figures, scoring 10 points.

Rehobeth’s Parker Turner was the lone player not among the final four teams to earn all-tournament honors.

Eufaula scored the first 12 points of the game and never looked back in a surprisingly easy 70-34 victory over Carroll.

Eufaula came out swarming, with its pressure defense collecting turnovers and its transition game finishing on fast breaks.

It was 12-0 before Carroll’s L.A. Shider put the Eagles on the board with a 3-pointer with 1:46 left in the first quarter.

“Any time you can get off to a good start it relieves a lot of pressure,” Eufaula head coach Michael Smith said. “Our boys came out ready and were very focused to do what they had to do tonight and the start was outstanding.”

He credited that opening surge to his team’s energy level, particularly on the defensive end.

“It basically starts with our defense,” Smith said. “I think we applied pressure and people were helping and recovering and moving around, not just watching. We got turnovers and scored some easy baskets.”

The second half wasn’t much different. Eufaula took 18 more shots and made 17 more field goals than Carroll for the game. The Tigers outrebounded Carroll 28-22, including 7-5 on the offensive boards. The Eagles had 25 turnovers to the Tigers’ 13.

“You’re going to win a lot of ball games playing like that,” Smith said when told of those numbers.

odarious Thomas led the balanced Tigers with 16 points. His 7-for-9 shooting came largely on breakaway layups after turnovers. Caleb Paige was next with 15 points for Eufaula. Jardarious Blackshire scored 13 points and Eiszeric Thomas 11 for Eufaula (11-5), which has now defeated Carroll twice in their three meetings.

Eufaula’s Eiszeric Thomas hits a jump shot during a game against Carroll High in a semifinal victory at the Downtown Dothan Hoops Classic.

Eufaula’s Jadarious Blackshire goes around a Carroll High defender during the semifinal victory.