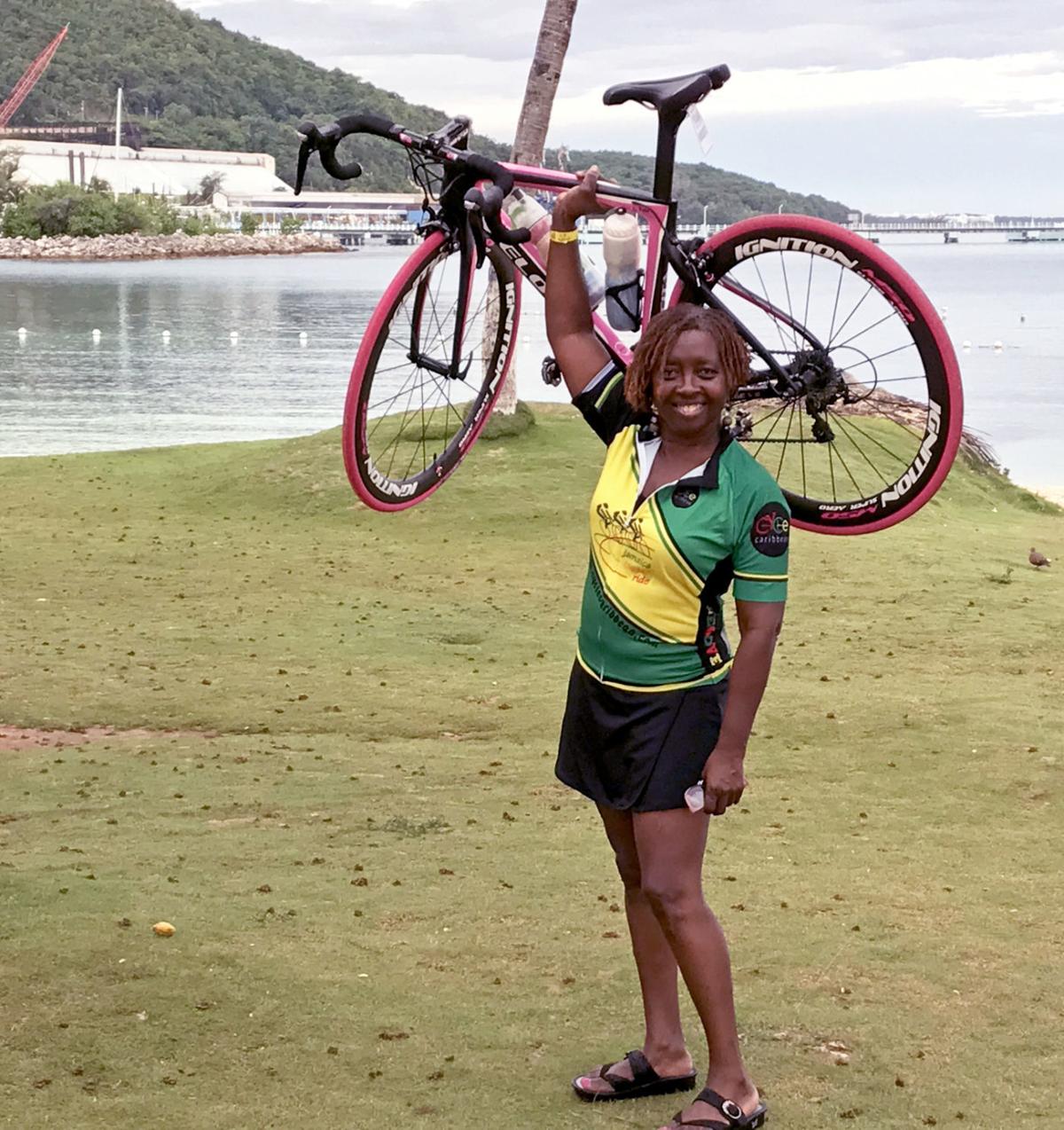 Avid cyclist Dr. Sheryl Johnson-Roulhac holds her bike skyward in victory after biking across Jamaica from Negril to Port Antonio last year. This week, the Jackson County native is riding Marianna’s gently rolling hills in preparation for the upcoming bike ride to commemorate the 55th anniversary of the Montgomery Voting Rights March. 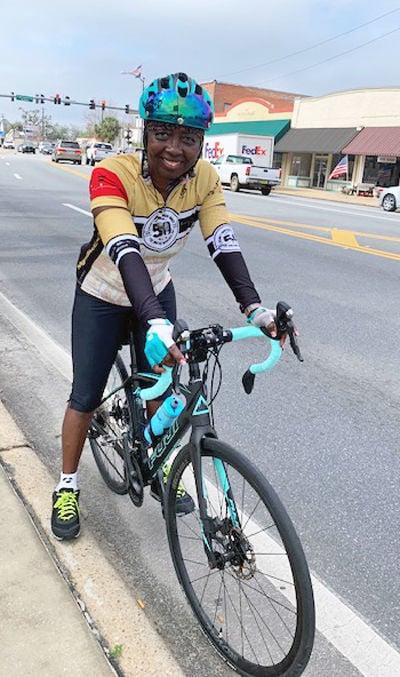 As she prepares to participate in an upcoming bike ride commemorating the 55th anniversary of the Montgomery Voting Rights March, Dr. Sheryl Johnson-Roulhac takes a short break during a training ride, Monday, Feb. 17, 2020, in Marianna.

Marianna native Dr. Sheryl Johnson-Roulhac was back in town this week, coming in from her current home in Detroit to visit family just before she joins more than 500 others on a 51-mile bike ride to commemorate the 55th anniversary of the Selma-to-Montgomery Voting Rights March of 1965.

The daughter of Barbara T. Johnson and the late Judge Roy L. Roulhac, she had made that ride on the 50th anniversary as well, in 2015. She’s in Marianna this week visiting her 76-year-old mom and other relatives, including her 107-year-old great-aunt, Catherine McElroy.

Johnson-Roulhac explained why she feels it’s important to ride the route again.

“There’s a saying: ‘We are our ancestors’ wildest dreams,’” she said. “I get to live a life that they couldn’t live. I get to do that, because of the things they did on my behalf, on the behalf of the generations to come. It’s important not to forget whose shoulders I stand on. My life is what it is, because of what they did, and it’s important for me to demonstrate to my children and grandchildren its significance and my acknowledgement of its power. It’s also my lived experience.”

Johnson-Roulhac, now 60, talked about the circumstances that existed in her youth in Jackson County.

“I had to sit in the balcony at the movie theater,” she said. “I don’t know how to swim or skate right now, because I wasn’t allowed in those places in my youth. My uncle, who ran a recreation program at Union Grove High School in Greenwood, would on Tuesdays take us to the pool in Dothan to swim, because that wasn’t available to us here. Tuesdays were the only times we could swim at the Dothan pool, because that was the day before they drained it every week. These are things that you remember and they affect you. I think there’s something in me because of the things I couldn’t do as a child.”

In a press release about the upcoming ride, the one in 2015, and the civil rights movement of her childhood, she wrote that she has vivid memories of being forced to enter downtown stores from the “back street,” having to sit in the balcony of the local theater, not being permitted to sit inside certain popular restaurants, but instead having to order from the take-out window, and being forbidden from skating rinks and pools.

“The people who strove in those days for equality, they have made such a tremendous difference,” she said. “Without their efforts, I couldn’t have worked at Kato’s as my first job, in downtown Marianna,” she said. “I remember, as a child, hearing the adults around me talking about the things that were going on — in one case, the KKK was supposed to ride, and I remember them talking about where they’d station themselves to protect their homes and families, the neighborhood. I lived all these things, trying to figure it out as a child. Those experiences are part of me.”

Her mother taught school locally 46 years, mostly first grade at Golson Elementary School. Johnson-Roulhac followed her mom into the field of education, and retired in 2018 from the University of Detroit Mercy, where she was serving as dean of its Center for Career and Professional Development.

She says she’s loving her retirement years. She travels a lot by plane, train and automobile, seeing the world. But she also pedals her way around the country sometimes. The commemorative ride she’ll start in a few days is one of her favorite cycling treks, because it holds so much meaning.

As it takes her back to childhood memories of the local civil rights movement, she said it reminds her that the story here has not yet been fully told, and should be. “There was Selma, but there was also Marianna. There’s a rich legacy here, too.”

It’s a story she may wind up writing herself. Her dad was prolific writer and deep researcher, and left her a treasure trove of information after his death. She’s contemplating a volume. It might start with some of the things she recalls.

Meanwhile, she’s getting her body in prime shape for the upcoming ride. This year, it will take place on Feb. 22.

Like the 1965 march, the ride, sponsored by the Montgomery Bicycle Club, will begin at the Edmund Pettus Bridge and end at the Alabama State Capitol.

“In 1965 the Voting Right marchers walked an average of 12 miles per day and slept overnight in nearby farmers’ fields. The weather was unusually cold with rain almost every day and temperatures near freezing,” Johnson-Roulhac recalled in a press release about the project.

Johnson-Roulhac graduated from Marianna High School in 1978. But before that, she attended the segregated Jackson County Training School, now Marianna Middle School, until it was integrated as she entered fifth grade.

She recalled that much of the change in the area, including school integration, was brought on by protest demonstrations led by the Jackson County chapter of the NAACP, including a civil rights march from Marianna to Tallahassee.

She said that, although as a fourth-grader she couldn’t fully comprehend what was happening around her, she recalls seeing the effigy of a black man hanging in a tree across from the former location of Marianna High School and hearing her older family members discussing their experiences as students fighting for change at the high school.

Johnson-Roulhac is a leader/organizer for the Detroit Chapter of Black Girls Do Bike (BGDB). She’s called a “shero” there.

“BGDB is interested in growing and supporting a community of women of color who share a passion for cycling,” she wrote in the release. “They champion efforts to introduce the joy of cycling to all women but especially women and girls of color.” She said she dreams of organizing a BGDB chapter in Jackson County. Find her on Facebook to learn more.

Avid cyclist Dr. Sheryl Johnson-Roulhac holds her bike skyward in victory after biking across Jamaica from Negril to Port Antonio last year. This week, the Jackson County native is riding Marianna’s gently rolling hills in preparation for the upcoming bike ride to commemorate the 55th anniversary of the Montgomery Voting Rights March.

As she prepares to participate in an upcoming bike ride commemorating the 55th anniversary of the Montgomery Voting Rights March, Dr. Sheryl Johnson-Roulhac takes a short break during a training ride, Monday, Feb. 17, 2020, in Marianna.