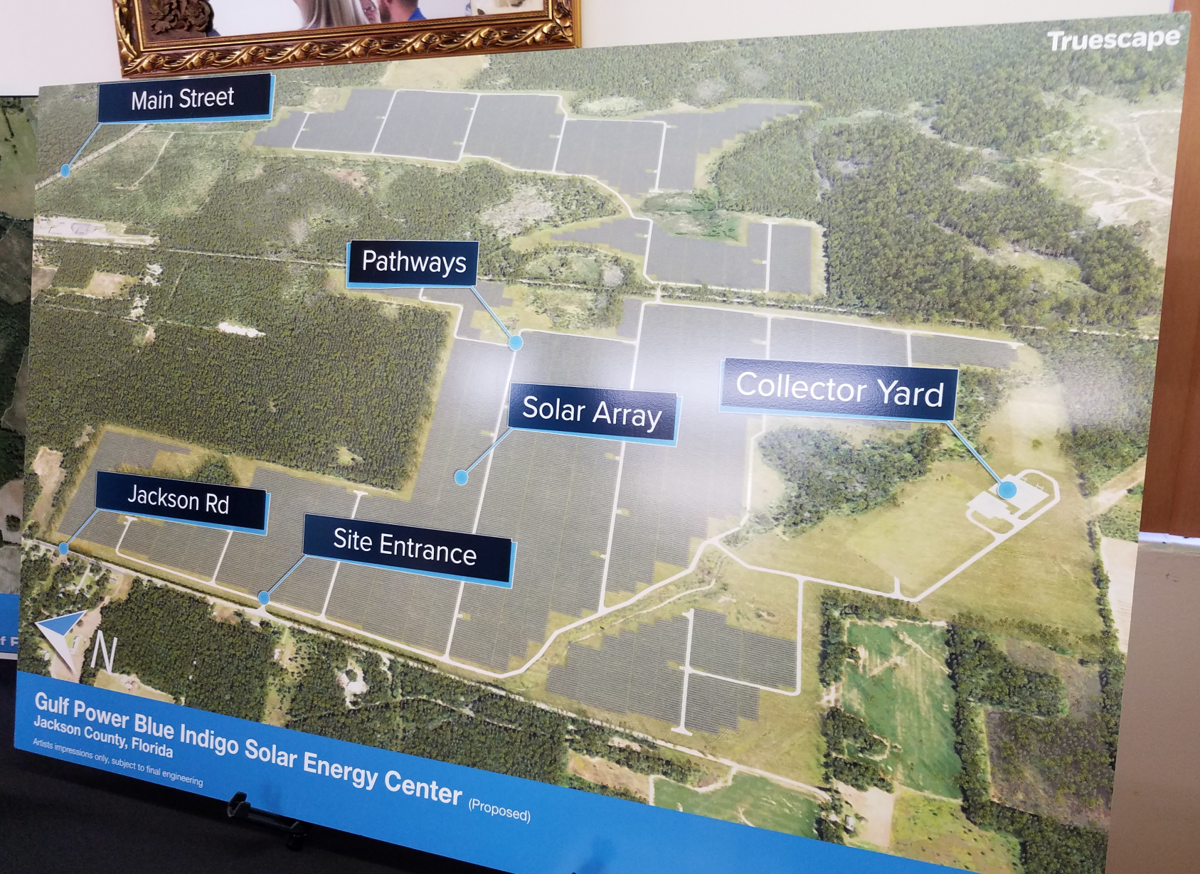 This open-house display shows Gulf Power’s plan for developing a solar farm near the intersection of Jacob and Jackson roads in Jacob. 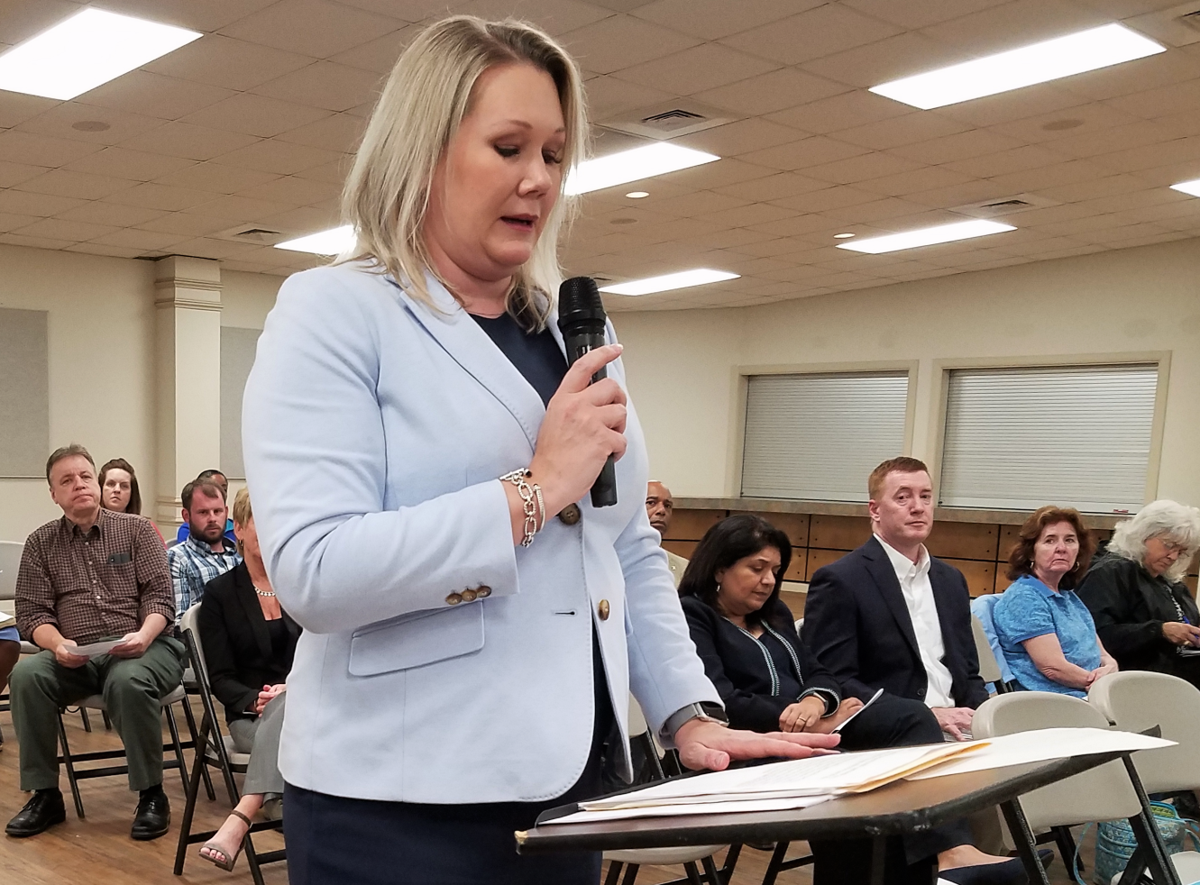 Amy Goodwin of Gulf Power talks to Jackson County Commissioners about that company’s plan to build a solar farm near the Jacob-area community. 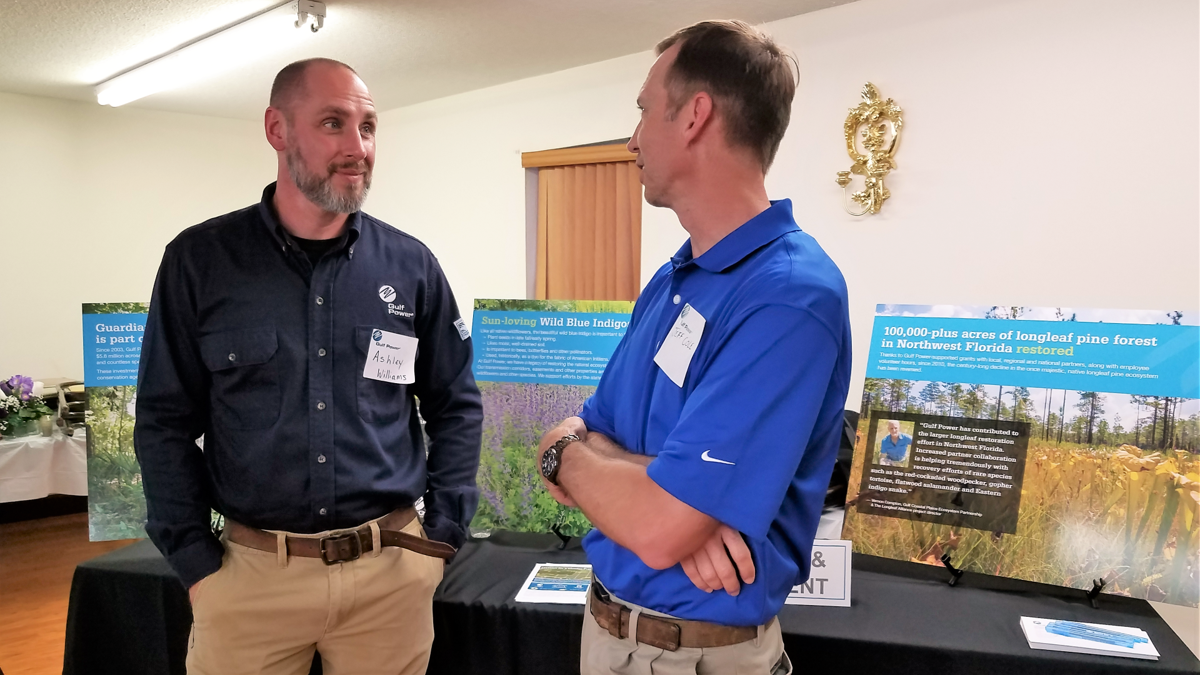 In this file photo from earlier this month at an open house hosted by Gulf Power to present its plan for a solar farm in Jacob, company representatives Ashley Williams and Jeff Cole talk near a display focused on environmental factors.

Construction of the project will provide 200-250 temporary jobs, company officials estimate. The jobs available include general labor positions and spots for warehouse personnel as well as for solar installers, electricians, and equipment operators.

Gulf Power plans to build its Blue Indigo Solar Energy Center on a 697-acre parcel of land off Jackson Road, about 1.5 miles south of where it meets State Road 162 (AKA Jacob Road).

The company hosted a public meeting on the proposal earlier this month at St. Mary Missionary Baptist Church in Jacob City, and several displays were provided showing the proposed layout and offering other information.

The center would generate 74.5 megawatts of solar energy, enough to power the equivalent of 15,000 homes. The energy option reduces carbon emissions and can lower costs. Company officials say it would be like taking 12,000 cars off the road in terms of the emissions it would eliminate.

Company officials also said the operation will be quiet, would have no lights operating at night, would not use water in its processes, and would not increase traffic on the surrounding roadways. Gulf Power also said that, during construction, it would create no dust or other adverse effects for the general surrounding community or adjacent farms, specifically mentioning that it would have no negative impact on productivity of their soils.

In approving the project Tuesday, local officials gave the company two years to complete the project, but allowed for a possible extension if more time is needed. It limited the footprint to no more than 795,916 square feet of impervious surface.

The development order gives the county the power to review the site and its development every three months as work progresses, and demands that the company remove all materials from the site if the project is for some reason abandoned or shelved along the way.

This will be the fourth solar farm for Gulf Power, but its first own its own; the others have involved partners.

Below, Gulf Power Senior Communications Specialist Kimberly Blair provided answers to the following set of submitted questions regarding the project.

•How many panels are planned as presently proposed?

•Is there room on site for expansion beyond what is currently proposed, and is that potential in the playbook?

-Our focus is on successfully developing the Blue Indigo Solar Energy Center. We cannot speculate about any future expansion of this site.

•What does “universal” mean in the context of “universal solar”?

-Universal means large-scale solar centers. We are investing in universal solar so we can bring the benefits of solar energy to all Gulf Power customers.

•Would this be the company’s biggest solar field to date?

-This will be Gulf Power’s largest solar installation in terms of power produced at 74.5 megawatts. For comparison, Gulf Power’s three other solar sites produce 120 megawatts combined.

•What are the sizes of the panels?

-The panels are approximately 6-by-3 feet. The panel (on display) at the open house (held in Jacob in early March) was a good representation of a typical panel.

•What’s the angle of tilt as far as the profile of the vertically-oriented panels?

- Gulf Power is continuously optimizing the solar site including the angle of tilt on the panels. This characteristic of the solar site has not yet been finalized.

•How far off the ground will the bottom of the panel be?

-Typically, 2 feet off the ground.

•Gulf Power indicated in handouts that the solar farm will be “reducing carbon emissions and lowering costs.” Should that be taken to mean that customers’ costs will go down appreciably, and if so when should that start showing up as a significant difference on power bills? Will there be a period when customers are cost-sharing this by paying more per kilowatt hour?

- Energy produced from a solar center helps keep customer bills low due to minimal operating cost and the use of sunshine for fuel. If built, Gulf Power’s Blue Indigo Solar Center will allow our customers to enjoy the benefits of solar energy affordably.

•Are there any real-world examples of this cost savings actually happening in households or for entities powered by the three existing solar farms that your company runs?

- The solar centers on Eglin Air Force Base, Naval Air Station Whiting Field’s Holley Outlying Field and NAS Pensacola’s Saufley Outlying Field were built by Coronal Energy in partnership with Gulf Power and the Department of Defense. These projects have only been in operation for about 18 months. Along with delivering clean energy, they are expected to deliver long-term value for our customers.

•Would solar become the primary source of power for your local customers? If so, what happens to dependability of power supply during long spells of rainy cloudy days?

•Will households need to install anything special to receive their power by this means?

This open-house display shows Gulf Power’s plan for developing a solar farm near the intersection of Jacob and Jackson roads in Jacob.

Amy Goodwin of Gulf Power talks to Jackson County Commissioners about that company’s plan to build a solar farm near the Jacob-area community.

In this file photo from earlier this month at an open house hosted by Gulf Power to present its plan for a solar farm in Jacob, company representatives Ashley Williams and Jeff Cole talk near a display focused on environmental factors.