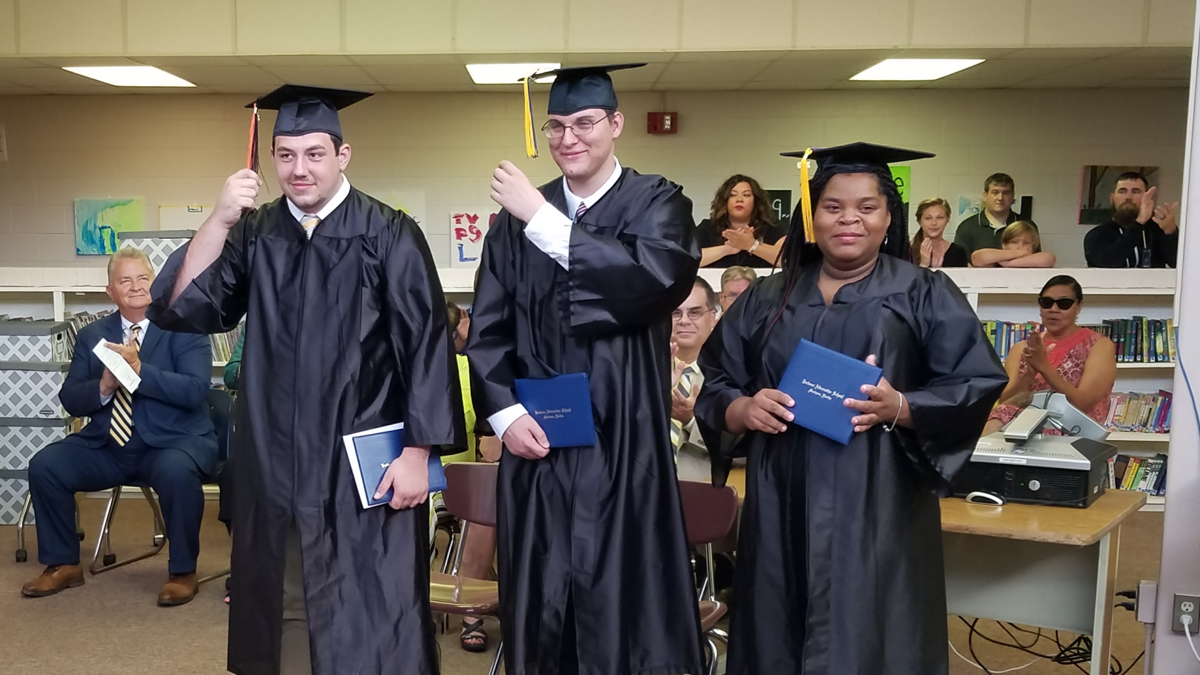 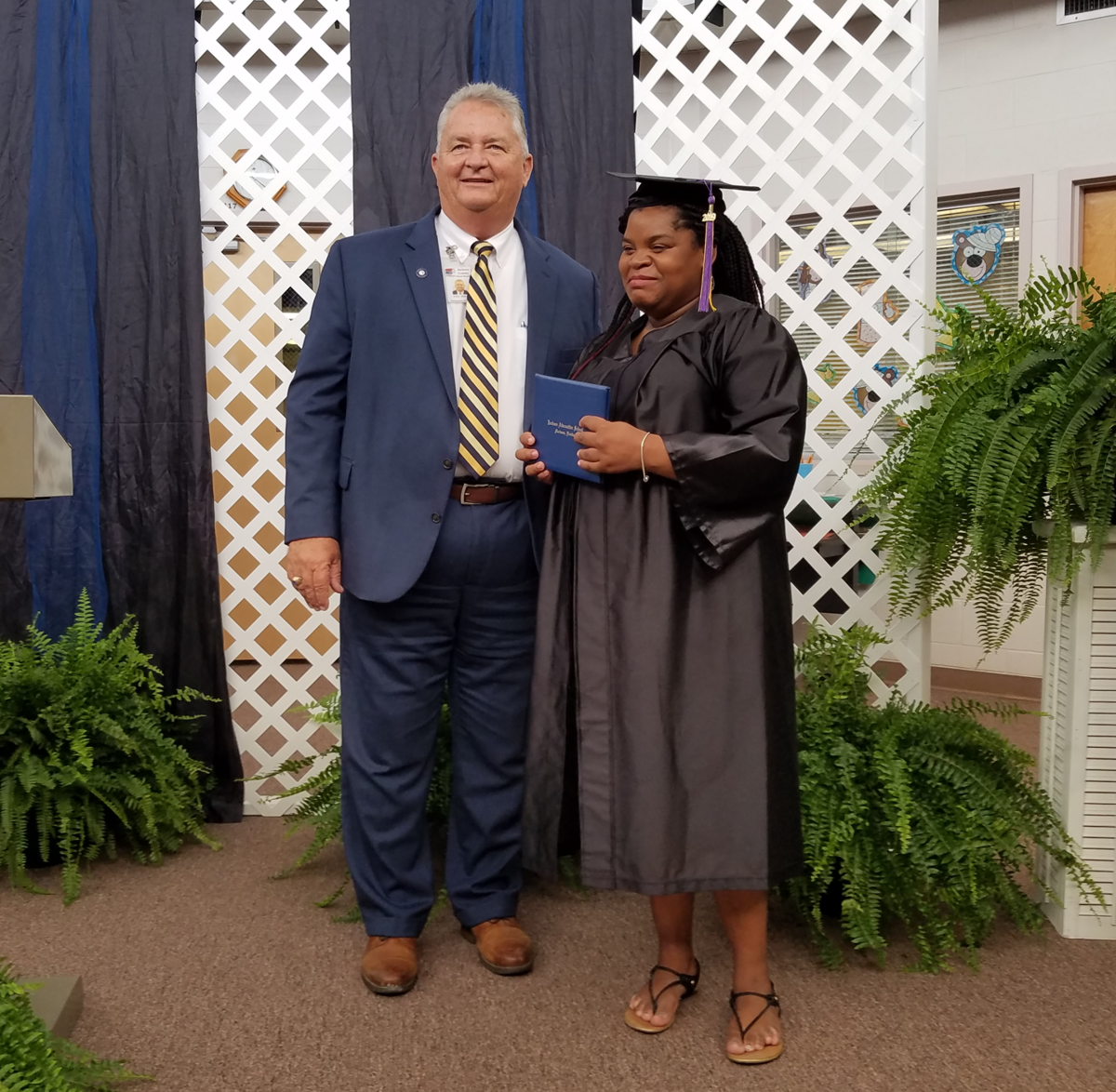 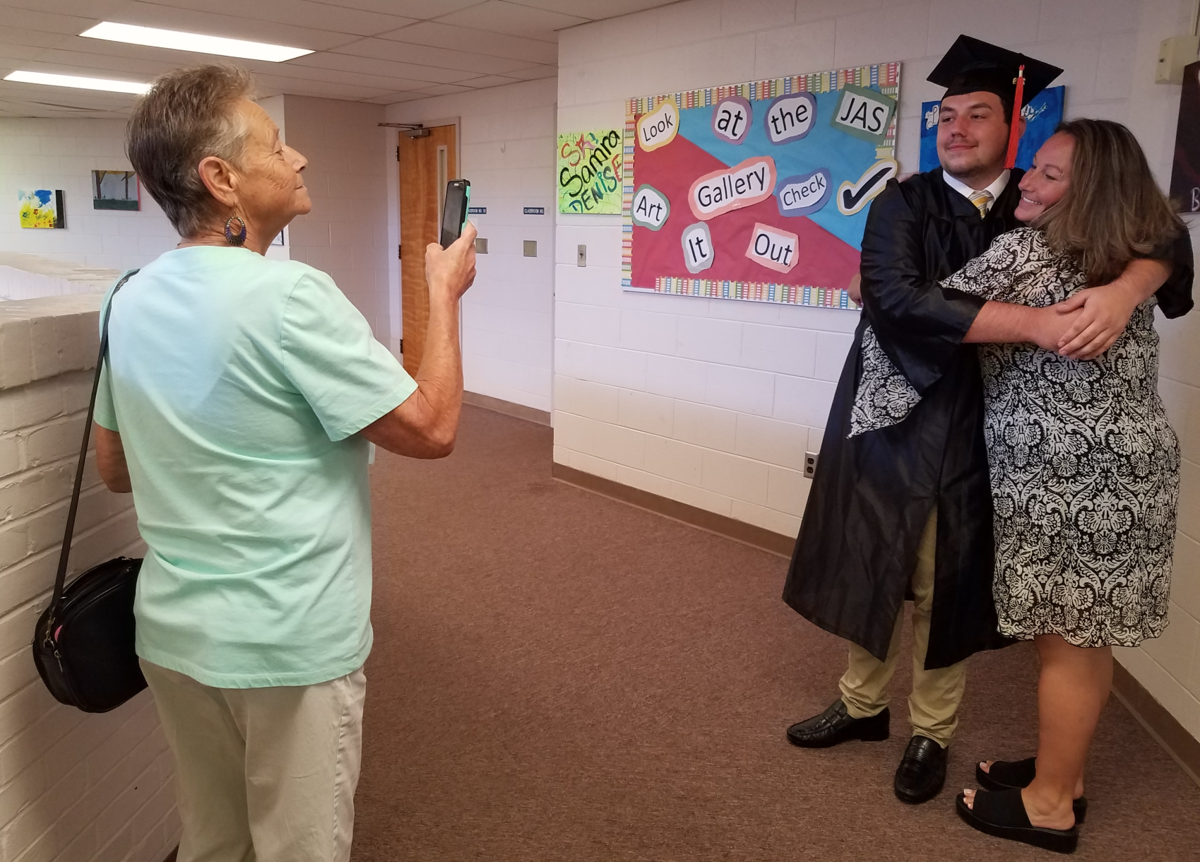 JAS graduate Wesley Hunter Bowen gets a hug from his mom as his grandmother snaps a picture of the moment. 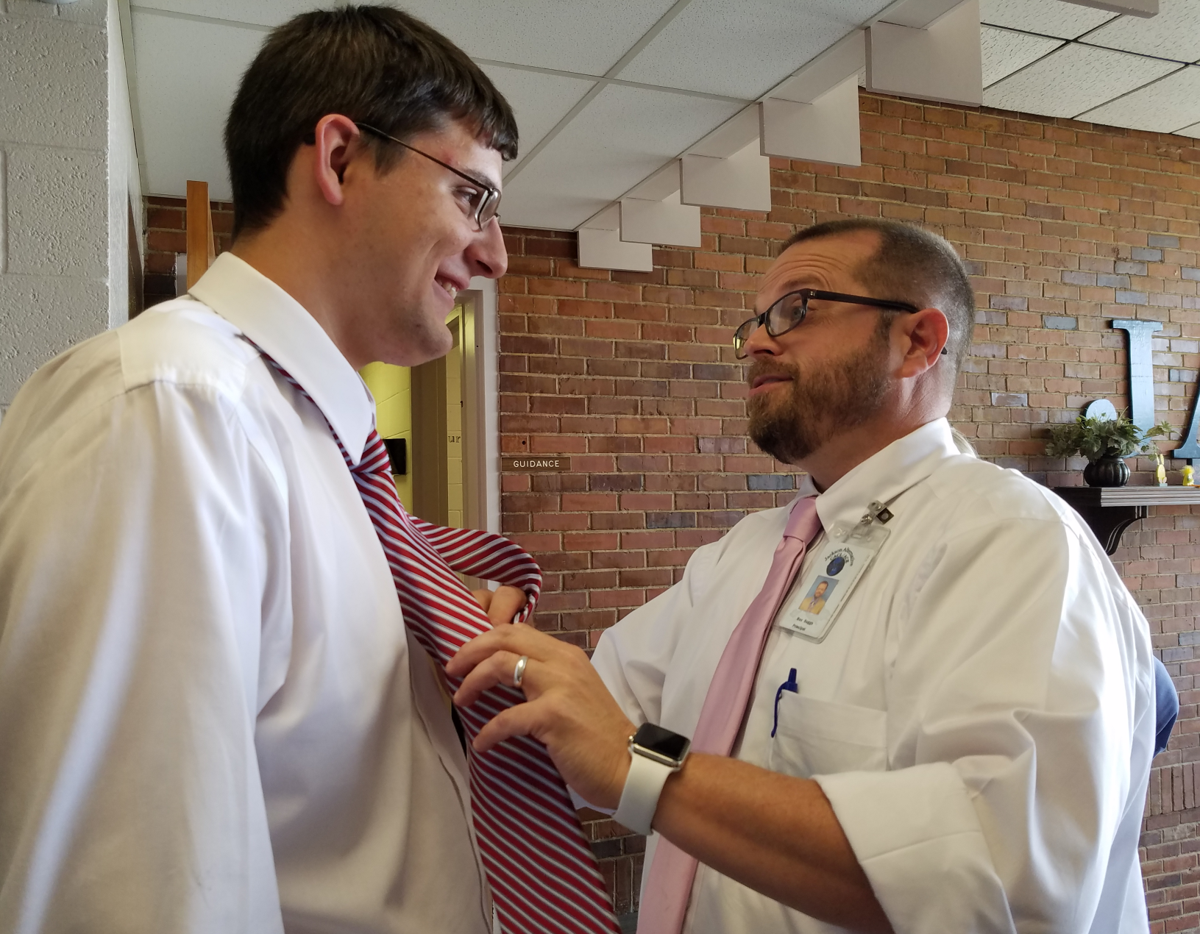 Matthew Dewayne Gibson gets a helping hand with his tie from his principal, Rex Suggs. 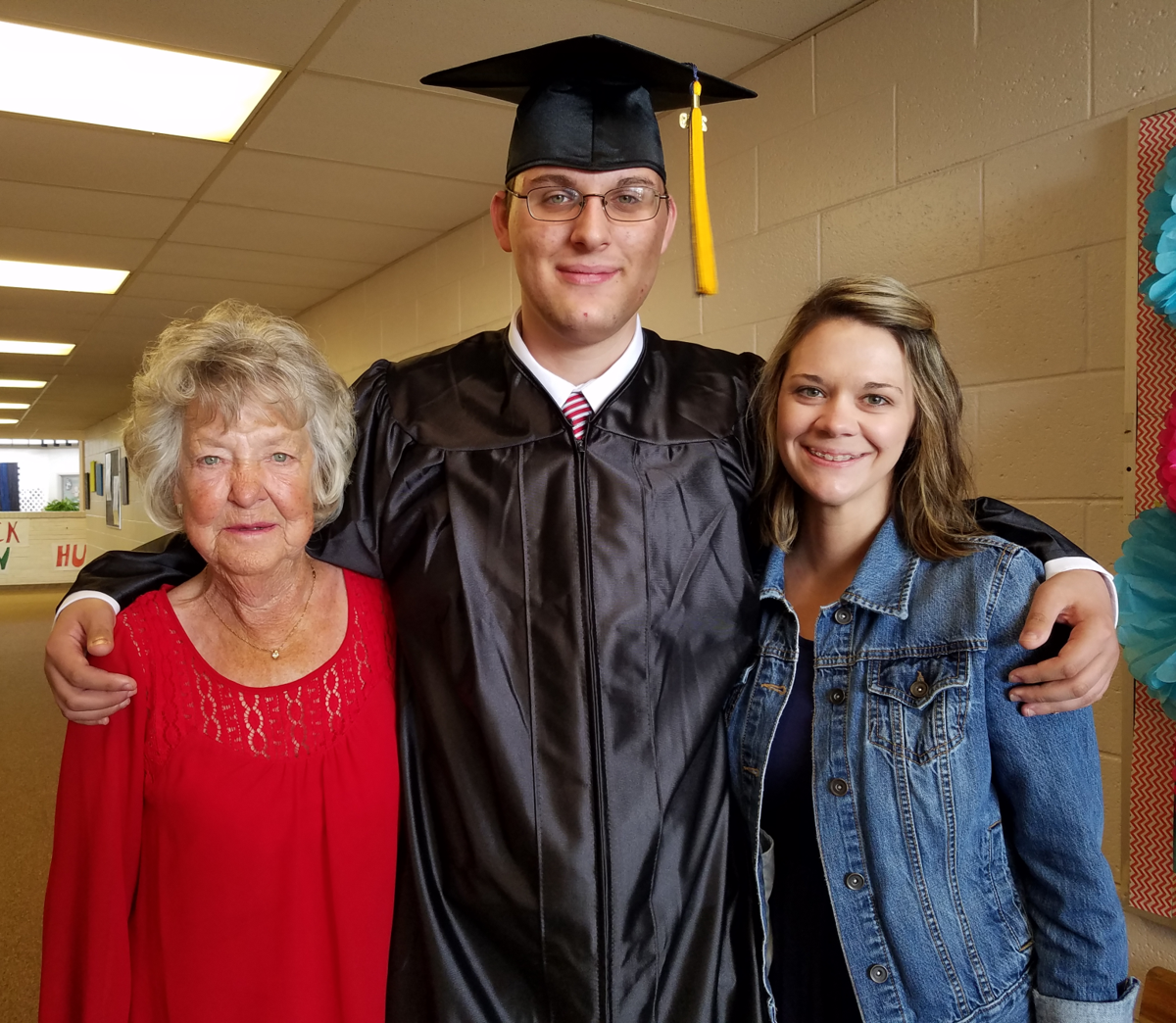 Matthew Dewayne Gibson shares a moment with his grandmother and sister before his graduation ceremony Monday.

It was one of smallest graduating classes ever in Jackson County—just three marched for their diplomas at Jackson Alternative School on Monday. But the small class of 2019 has big dreams for the future.

One of the three, the only female in the group, will probably be a mother by the time this story prints.

A bit overdue, 19-year-old Tykia Dayshonna Thornton was scheduled for induced labor on Tuesday morning, and is expected to have her daughter’s birth certificate in hand less than 24 hours after reaching for the diploma Jackson County Superintendent of Schools Larry Moore handed her Monday morning.

Thornton set her inducement date to fall after that milestone, saying she wanted her diploma before her first child, Royal, came into the world.

She’ll have a full plate very soon—in addition to becoming a mother, she’ll be taking post-secondary courses-a full load, she hopes, on line, and will be working full time as well. She has two mother-figures in her life, a fact that might make things a little easier.

But it will be largely up to her to make it all work out. She’s ready for the challenge, she says, a little apprehensive about learning to be a mom, but excited about it just the same.

She and her two fellow graduates share some qualities, says their principal, Rex Suggs, that make him confident that they’ll all be able to meet whatever challenges life hands them.

The three were first assigned to JAS because of some behavioral problem or other—that’s the primary reason any student is sent there for a few weeks or months. But all three chose to stay long past their required time in the alternative school, rather than going back to their home schools.

Thornton has been there almost exclusively since the first grade. She briefly tried Riverside in her elementary years, but returned to JAS after a month in the 5th grade because the bigger school with more hustle and bustle was not a good fit for her. She thrived better academically and socially in the smaller setting, where the entire student population, from kindergarten to 12th grade, typically hovers around 110.

As she enters her college years, she dreams of a career as a technology whiz in cyber security or helping law enforcement catch the bad guys.

Suggs said he has every confidence that she will meet her life goals. On stage during the ceremony, he talked to directly to her in that regard. “I’ve watched you grow into a wonderful, responsible, mature young lady,” Suggs said. You can be as stubborn as the come, but you’ve made me laugh and almost cry. You had me figured out before I figured you out,” he continued, recalling her ability to make him lose momentum during a talking-to by inquiring about his family’s welfare mid-scold. “You have grown up on me and I’ proud of you, the young lady you’re becoming.” He advised her to use her stubbornness to stick to her values and plans.

Hunter Bowen came to JAS in 8th grade, well behind his age group at 15. When he met Suggs, he flatly told the principal that nothing he said about the days to come mattered to him—he’d be quitting when he turned 16. Suggs saw a boy who had given up but the school leader had one ace to play-he asked Bowen if he’d ever heard of the school’s ‘credits recovery’ program that allowed students to catch up faster than they could on a traditional path at their home schools. Three years later, Bowen is graduating at the age of 18, despite life challenges that included a fire that destroyed his childhood home. He’s on track now to build a career in the flooring industry and already has a job in that field.

And then there’s 21-year-old Matthew Gibson. His eyes welled up at points during the ceremony Monday, and his sister, too, showed signs of tears. She acknowledges being fearful long ago that her brother might not see diploma day. Faced with challenges associated with autism, he struggled emotionally through school and also academically, but his fortunes began to change when he started at JAS in 4th grade. He’d felt picked on back in his home school but found a welcoming spirit at JAS. “Everybody helped me,” Gibson said, rattling off the names of some key teachers. School, he said, became “joyful instead of disruptive.” He’s made friends here that he hopes will be lifelong buddies. “I call this school my family,” he said. “I could have gone downhill but I’m graduating today.” He plans on some celebrations involving all his biological family members to further mark this important day.

Suggs said all three had struggles and that all three were challenges in their own ways. But a shared trait, their principal said, is what brought them to the stage as graduates in caps and gowns on Monday.

“They didn’t quit,” Suggs said in an interview before the graduation ceremony. “I love a challenging child, and all three of them were definitely that. They challenged, and yes, they were sometimes stubborn. Their spirits and their personalities were strong.” In his commencement address, Suggs continued talking about those qualities. “All three of them endured and persevered. All have this common quality-they stayed the course with a no-quit attitude. That will take you far in life,” he continued as he turned and began addressing the three students directly. “Perseverance is the hard part. You guys have the opportunities because of that. Quitting will never pay off. Sometimes we have to stay the course without immediate reward. The storm taught all of us that,” Suggs said.

But these three had a handle on that fact long ago, he said. Suggs encouraged the students to keep that fact in mind as they go forward and to always be proud of themselves, their accomplishments and their uniqueness.

Members of the Graceville High School Class of 2019 received their diplomas in a ceremony on Tuesday, May 21, 2019, in the GHS gymnasium.

Members of the Sneads High School Class of 2019 received their diplomas during a ceremony on Monday, May 20, 2019, at the SHS football field.

Members of the Malone High School Class of 2019 received their diplomas during a ceremony on Thursday, May 23, 2019, in the MHS gymnasium.

JAS graduate Wesley Hunter Bowen gets a hug from his mom as his grandmother snaps a picture of the moment.

Matthew Dewayne Gibson gets a helping hand with his tie from his principal, Rex Suggs.

Matthew Dewayne Gibson shares a moment with his grandmother and sister before his graduation ceremony Monday.