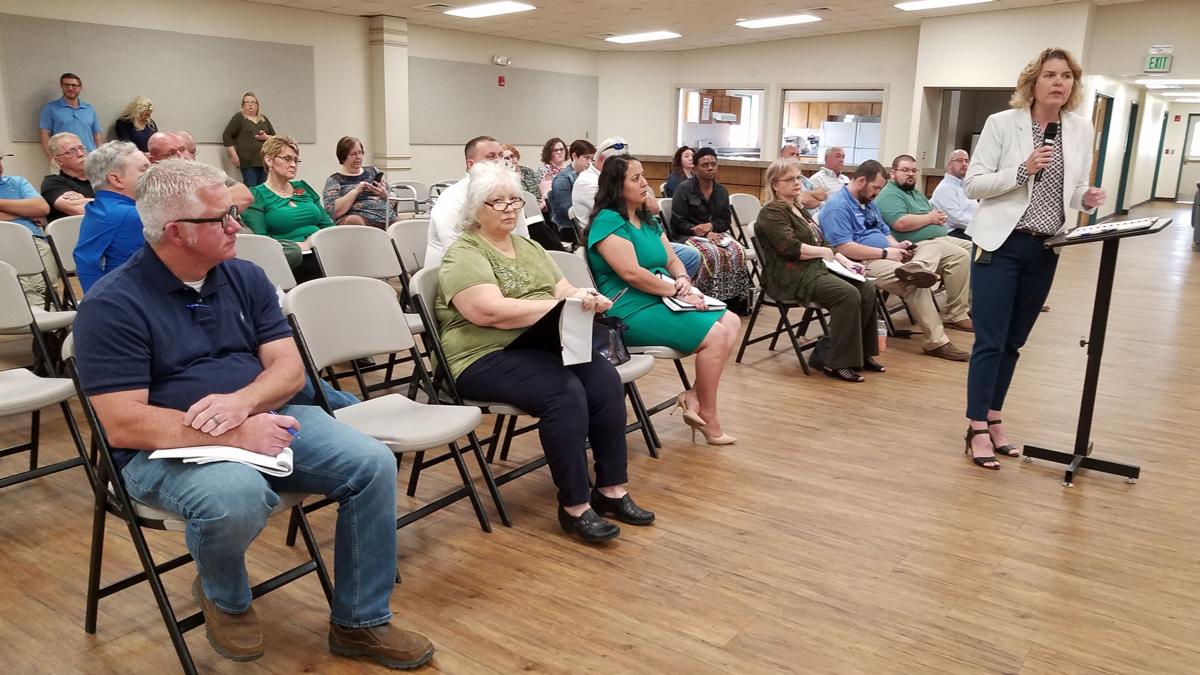 Jackson County Health Department Administrator Sandy Martin updates Jackson County Commissioners and others on COVID-19 at a special board meeting in the Jackson County Agriculture Complex, Tuesday, March 17, 2020, in Marianna. 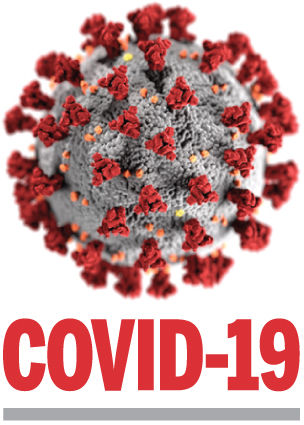 Jackson County Commissioners declared a local state of emergency in special session Tuesday and took several other actions in response to the COVID-19 virus.

They held the session in the Jackson County Agriculture Complex in a meeting room larger than their own, which helped the assembled achieve more social distance.

Declaring an emergency authorizes implementation of the county’s Emergency Management Comprehensive Plan and Emergency Operations Plan if they become necessary in dealing with the crisis.

In other action, the board voted to close all county offices to general entrance by the public until March 30, with the possibility that the precaution will extended past that day. Signs on the doors of the offices will have a phone number where staff inside can be reached to field questions or provide further instruction.

Also, no rental of county facilities will be permitted for the next 30 days any special events that had been planned inside them for the period will be cancelled. Those that have paid deposits already will get a refund or have an opportunity to reschedule.

Commissioners also cancelled their regularly scheduled meeting of March 24, and will meet next in regular session on April 14, unless circumstances change. Any matters that must be taken up before that time will be handled in special session. Board members were told that there have been efforts to convince Florida Governor Ron DeSantis to suspend certain elements of the Florida “Sunshine” laws meant to guarantee public access to meetings in which government officials conduct business, but were told he has not yet taken any such action. Commissioners have a staff member researching to see whether board meetings might be “live-streamed” or otherwise made accessible in real time.

In other action to keep government operations running smoothly in the face of the virus and the safety precautions made necessary by it, the board authorized staff to sign off on any regular bills that surface between this last session and the next, and authorized county administrator Wilanne Daniels to spend up to $50,000 for emergency supplies if the need arises. Typically, she can only spend up to $15,000 without prior board approval.

The board learned in the Tuesday session that there are no recorded cases of the virus yet in Jackson County, but commissioners were warned that its spread is growing across the world, nation and state, and that the trend is expected to continue.

Jackson County Emergency Management Director Rodney Andreasen said Tuesday that he would put the emergency department on “level 2” activation once a single case is confirmed here.

Jackson County Health Department administrator Sandy Martin advised commissioners that she would keep county officials aware as soon as she knows of any local cases. In an update to the board, Martin also reminded the board of the precautions recommended for everyone – things like thorough hand-washing, keeping a social distance of at least 6 feet, avoiding contact with a known infected person, covering cough and sneezes with something other than the naked hand, self-quarantining for 14 days if you’ve traveled out of the country or into a in-country location that has been identified as having a high number of corona virus cases, and avoiding gatherings of 50 or more people. That’s the state’s general recommendation, but she acknowledged, though, that 10 or less is even better.

Churches are grappling with such questions about crowds – whether to cancel regular services for a couple of weeks, for instance, and what to do about holding weddings and funerals. Martin is advising individually on some of those issues.

At the meeting Tuesday, Commissioners also heard from Jackson County Fire Rescue Chief Charlie Brunner, who said that some precautions are being taken to protect his team and the people they tend to. For instance, dispatchers will be asking callers a series of questions once they get their crews on the way to scenes. Those additional questions will be about whether certain symptoms common to COVID-19 are presented by the patient to be seen.

Also, Brunner said, in cases where it is possible and advisable, the patient needing their care will be asked to come out into the open air for initial assessment so that a safer distance can be maintained for all. Further, only one member of the crew will be sent inside, initially, in cases where the individual can’t come outside and when it is clear no more than one is needed for an initial quick triage.

Crew members are also being directed to bring an extra set of street clothes to work so that they can change into something fresh for the trip home after shift, and to leave their footwear outside the living space of their dwellings.

At the Jackson County jail, administrator Jammie Jeter said he and other jailers are working with state officials on a possible plan to grant some inmates extra gain time in order to reduce the prison population and therefore reduce risk of illness inside and therefore its spread to the outside. He also said he is also having extra clean-up regularly done, and ordering extra food and medical supplies. The outside work squad program has also ceased for now.

All unnecessary movement of inmates in and out of the jail is being suspended, with first appearance and certain other procedures taking place via video rather than moving the inmates from jail the courthouse and back again for proceedings. Trials are also being pushed back.

For up to date information on the Coronavirus, visit www.floridahealth.gov, www.cdc.gov, or call the Florida Department of Health Call Center at 866-779-6121.

A lawyer born and raised in Marianna has been made a judge by Gov. Ron DeSantis.

The third, fourth and fifth COVID-19-related deaths in Jackson County were announced Wednesday.

Jackson County Health Department Administrator Sandy Martin updates Jackson County Commissioners and others on COVID-19 at a special board meeting in the Jackson County Agriculture Complex, Tuesday, March 17, 2020, in Marianna.