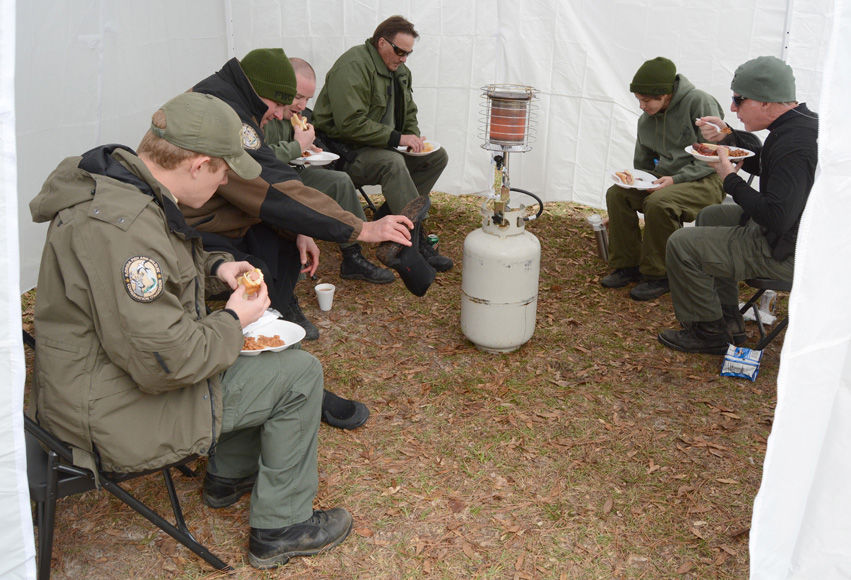 Florida Fish and Wildlife Officers take advantage of a heated tent and warm food supplied by Evangel Worship Center during a break in the search for a missing duck hunter Thursday. 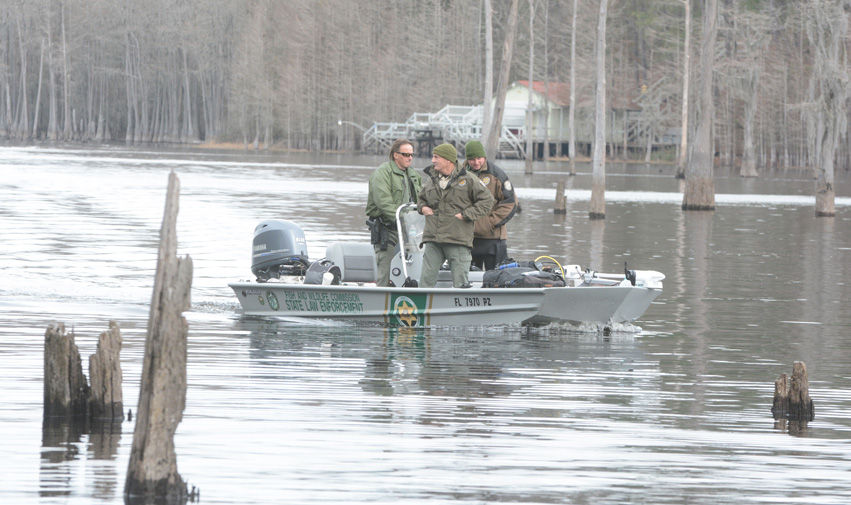 Searchers used boats, horses and a drone aircraft to search Ocheesee Pond and its surrounding area Thursday for a missing duck hunter.

On Thursday, volunteers from a local church spent a second cold and windy day with the officers who are searching for a missing duck hunter at Ocheesee Pond.

Dogs, horses, drones, boats, and helicopters have been deployed in the hunt for Calhoun County resident Scott W. McCormick. His 60th birthday was Thursday. A friend had reported him missing Tuesday after dark when he failed to return from his duck hunting excursion on Ocheesee Pond. His boat and some gear have been found, but as of noon Thursday he had not been located.

Pettis said his emergency response support team has been called out several times in the past, but that this operation was the first in which the crew deployed the trailer they’re using to make coffee and store sundries that the searchers might need for their comfort while they’re on the mission. The Evangel volunteers also brought a pop-up tent where dive team members can take shelter and get warm when they take a break from the icy waters of the pond. There’s a propane heater inside that vented tent, Pettis said.

They also brought a big grill that they’re using to cook food for the searchers. On Thursday, lunch consisted of sausage dogs. They were planning to serve an evening meal if need be, and would be on site for as long as the search team worked.

He and other volunteers periodically trekked deeper into the search area to bring thermoses of coffee and other supplies needed by the searchers who were looking in swampy area about a mile and a half from the Ocheesee Pond landing where the trailer, tent and grill were set up.

Pettis said some of his volunteers even took off work to participate, while others who were off-duty rearranged their personal business affairs so that they could serve.

The trailer they’re using as the center of their support effort was provided by the sheriff’s office, and was part of some confiscated property. The church team added shelves and other items to fit it out for the purpose.

Florida Fish and Wildlife Officers take advantage of a heated tent and warm food supplied by Evangel Worship Center during a break in the search for a missing duck hunter Thursday.

Searchers used boats, horses and a drone aircraft to search Ocheesee Pond and its surrounding area Thursday for a missing duck hunter.