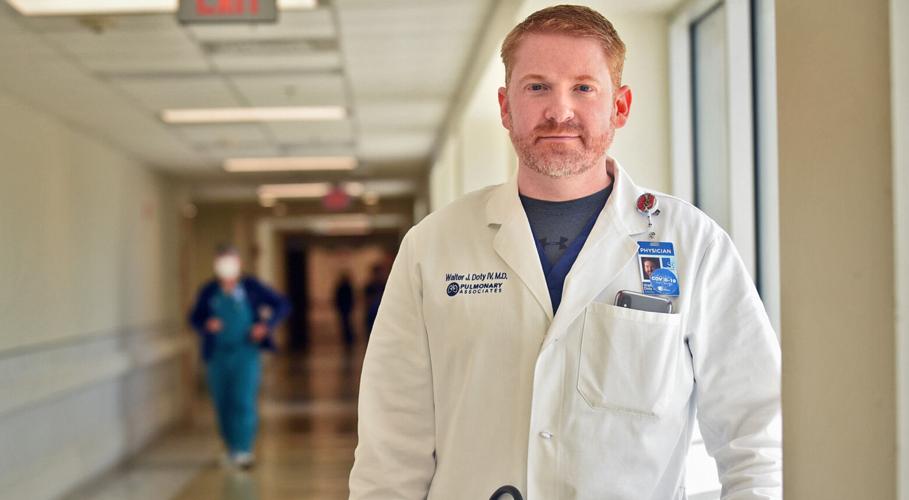 Dr. Walter Doty of Pulmonary Associates poses for a photo at Southeast Health on Wednesday, July 28. 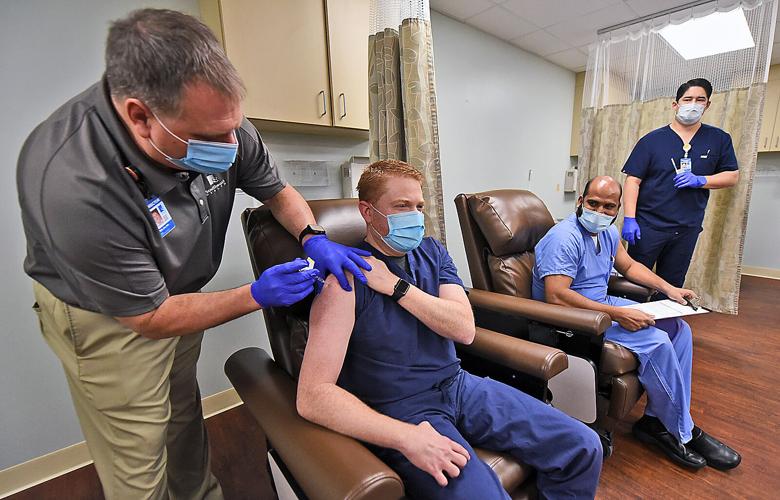 Dr. Walter Doty, an intensivist with the Critical Care Unit at Dothan’s Southeast Health, receives the first dose of the COVID-19 vaccine in Alabama on Dec. 15, 2020, as Dr. Ravi Nallamothu looks on.

As the COVID-19 pandemic ticked away at the calendar, Dr. Walter Doty has experienced a mix of emotions.

It’s been rewarding to practice medicine and help people with his skills. There’s also been sadness as patients struggled without their families nearby for comfort and help.

“I guess one of the newer emotions is frustration,” Doty said. “We certainly started to feel a lot of that and almost bordering on anger just because we have something at this point. The difference between now and last year is that this is becoming by and large a preventable illness. And unfortunately, we’re not doing the things that we need to do to try to prevent it. And as a result we’re unfortunately suffering the consequences right now.”

Doty is a pulmonologist with Pulmonary Associates and an intensivist in the Critical Care Unit at Southeast Health in Dothan. As an intensivist, Doty cares for some of the sickest of patients in the hospital. In the last year, many of his patients have been sickened with COVID-19.

But what adds to the frustration is that in June, the hospital only had one patient with COVID-19 and the hospital was almost COVID-free.

“We felt like we were so close,” said Doty, who was the first in Alabama to receive a vaccine back in December. “There was a lot of enthusiasm for the vaccine but unfortunately what we’ve seen is that enthusiasm has gone away, and the people that wanted a vaccine have gotten one and now there’s a large proportion of people that are unvaccinated – we are either last or next to last as far as vaccination rates in this state. And it is no coincidence that states that have the lowest vaccination rates are now seeing these large outbreaks, which is what I believe we’re about to be in the middle of.”

He worries about the hospital becoming overwhelmed again and non-COVID patients being neglected as a result. And then there’s still an ongoing shortage of critical care nurses. He worries about a lot of people getting sick or dying or developing what is called long COVID – ongoing, sometimes debilitating, symptoms that linger after a patient’s initial recovery.

Dr. Allen Latimer, a pulmonologist and intensive care physician with Flowers Hospital, is a part of the COVID-19 response team at Flowers. The recent surge makes him feel like the state has turned back time.

“We’re seeing positive cases and hospitalizations approach the same levels we saw at the peak of the pandemic,” Latimer said in a written response to the Dothan Eagle. “Recently, I was off for a few days, and when I came back it felt like I stepped back into 2020. We’re also seeing more hospitalizations among younger patients with fewer health issues now.”

Latimer said he’s talked to a number of patients about their choices regarding vaccinations.

“The explanations I’ve heard for people not taking the vaccine are not substantiated by science,” Latimer said. “I’ve not had anyone give a logical explanation as to why they would not take the vaccine. Unfortunately, I’ve talked to a number of patients who said they were waiting to see if the vaccine was safe, and they’ve died in the meantime. We know the vaccine is safe, and the hesitation behind the vaccine is one of the difficulties as a healthcare provider – these deaths feel unnecessary and could have very well been prevented by taking a vaccine.”

Misinformation on social media and elsewhere has caused people to put themselves and others at risk for serious illness and possibly death, Latimer said.

“Once you’re sick or in the hospital, it’s too late for the vaccine,” he said. “It takes weeks for the vaccine to become effective, so once you start getting sick, you just have to rely on your body’s defenses at that point. However, it is recommended that you still get the vaccine after you have recovered. People who are vaccinated after having the virus are having an additional strong antibody response, which tells us you get added protection from the vaccine even after being sick with COVID.”

Flowers Hospital has treated more than 900 COVID-19 patients with monoclonal antibodies to lessen the severity of the illness. It’s been effective for high-risk people, according to Latimer and hospital officials. But the infusion has to be prescribed and administered at the hospital; and it is not for people already hospitalized due to their symptoms. It has, however, kept hundreds of people out of the hospital, Latimer said.

“The fact that we have the lowest vaccination rate puts us at great risk,” Latimer said. “We had an opportunity to avoid our present position, but we missed the boat. The difficulty and concern with the new variant is that there is a lot more of the virus in a person’s upper airways when they are sick, which makes it much more contagious.”

The majority of COVID-19 patients these days with severe illness are unvaccinated. Statewide numbers suggest around 96% of deaths due to COVID-19 are people who were unvaccinated.

“This is by and large a surge of the unvaccinated,” Doty said.

Doty said the severity of current cases is not much different from early in the pandemic before the virus mutated into different variants that have proven to be more contagious. Alabama has identified several variants in the state, including the Delta variant believed to be the cause of the surge in cases and hospitalizations around the state and country.

Doty said he doesn’t judge his patients. He sees his job as to provide care whether the patient is vaccinated or unvaccinated.

“They’re already feeling bad enough at that point and my job is to care for both the vaccinated and the unvaccinated,” Doty said. “And we’re obviously going to keep doing this again and again and again as long as we have to because that’s what we’re called to do. But I would be telling you a story if I told you that I was not frustrated and disappointed with our state and how a lot of people are letting us down in doing something that’s very simple and safe and effective and we’re just not getting it done right now.”

Should you still get the flu shot if you already had the flu?

Should you still get the flu shot if you already had the flu?

When to wash your dog's food bowl

When to wash your dog's food bowl

Dr. Walter Doty of Pulmonary Associates poses for a photo at Southeast Health on Wednesday, July 28.

Dr. Walter Doty, an intensivist with the Critical Care Unit at Dothan’s Southeast Health, receives the first dose of the COVID-19 vaccine in Alabama on Dec. 15, 2020, as Dr. Ravi Nallamothu looks on.