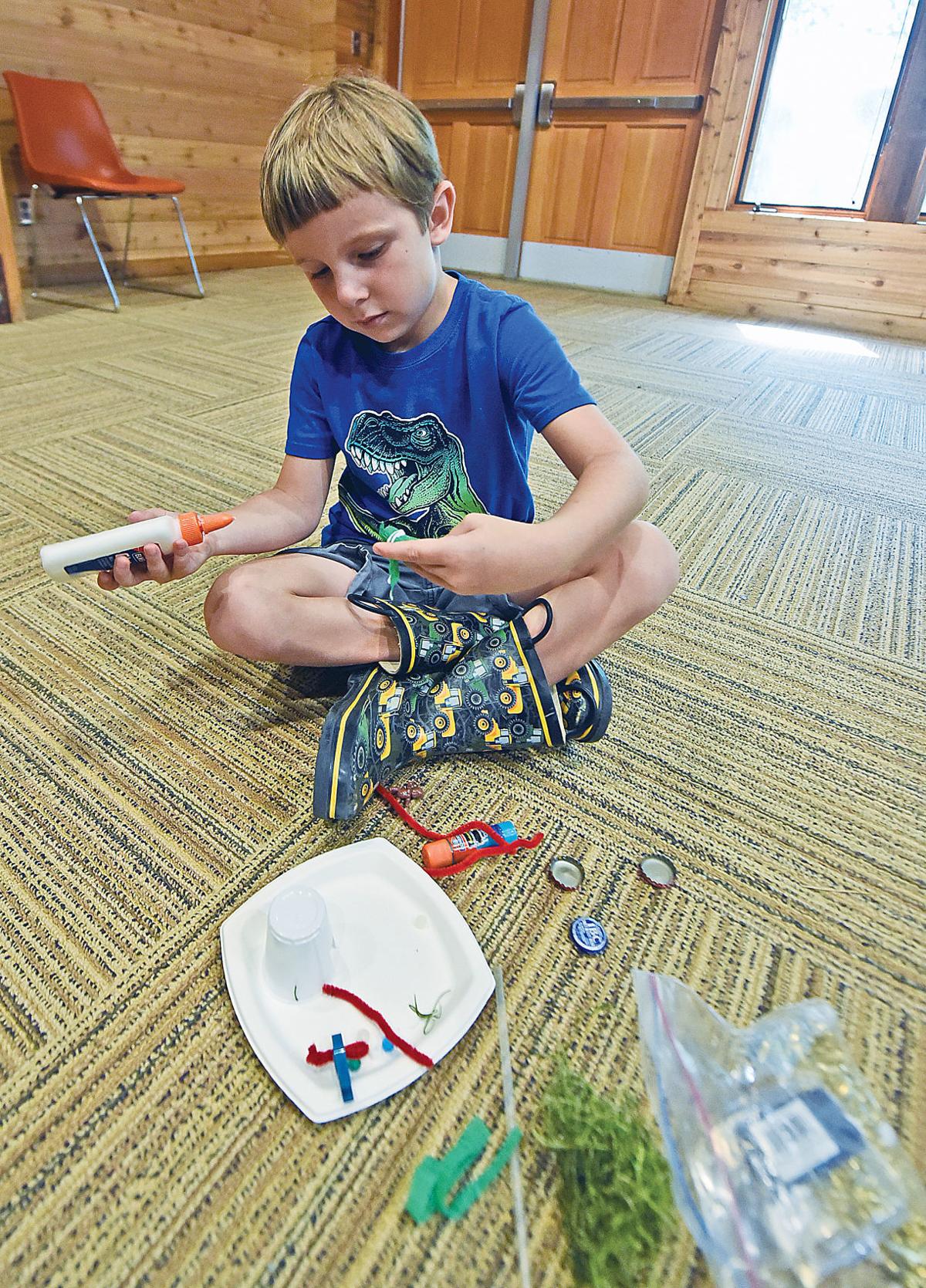 Colton Wise works on his gnome home at Landmark Park. 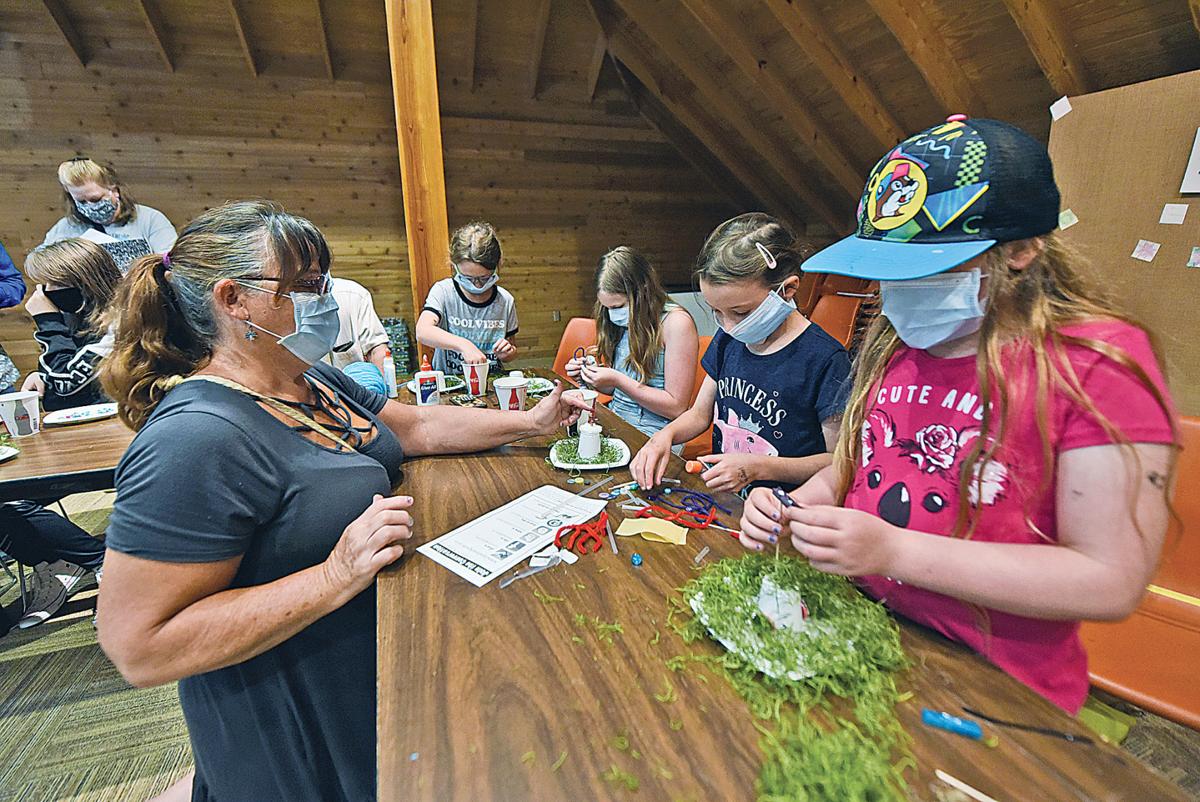 Children create their own gnome homes during Wacky Wednesday at Landmark Park. 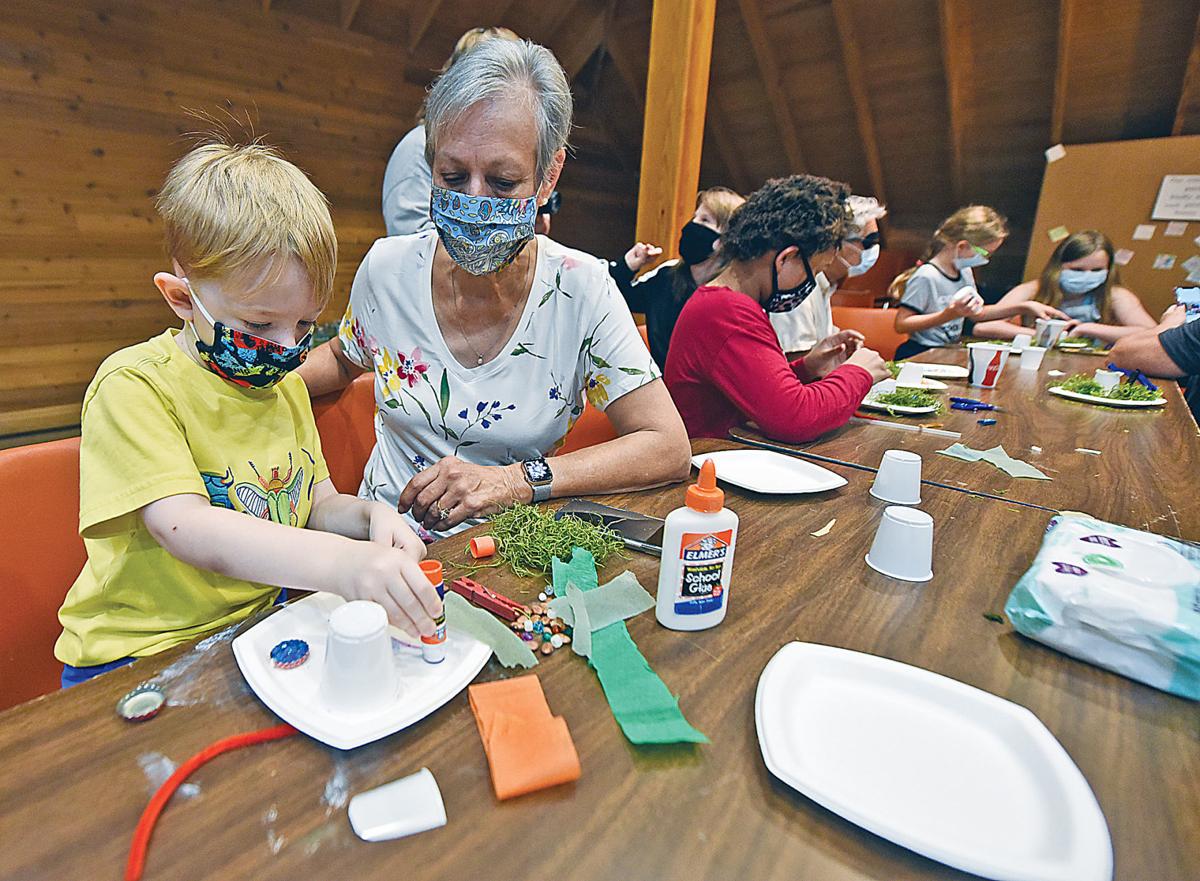 Susan Holmes watches as her grandson Bradley Morris applies glue to the base of his gnome home during Wacky Wednesdays at Landmark Park.

When Katie Glover’s grandmother asked her to pick out five beads to decorate the path to their gnome home, the 4-year-old retrieved the entire bag of beads.

Her grandmother Pam Alexander broke the sad news that they couldn’t use the entire bag of beads — after all, their gnome path was only a few inches long. So instead of the whole bag, Katie reached in and grabbed a fistful. Alexander and Katie knew a few things about fairy gardens before they arrived at Dothan’s Landmark Park to build a gnome home with other crafters during a recent Wacky Wednesday program.

“She and I have a fairy garden behind my house, and I have a flower bed full of day lilies … even her brother likes to get out there and play with the stuff,” Alexander said. “They always want to rearrange it.”

After being closed for two months due to COVID-19, Landmark Park reopened around the end of May. The park didn’t host any programs or activities during June but is now slowly easing back into hosting gatherings like the park’s July programs — the Wacky Wednesday series, Animal Adventures on Thursdays and Fridays, and Heritage Forums on Sundays. The park is also hosting its Music by Moonlight concerts and some of its summer camps along with recurring programs such as reptile feedings, beekeeping, Sit and Sew, and blacksmithing demonstrations.

“Usually in June we would be chock-full of stuff, but we didn’t want crowds forming,” Executive Director Laura Stakelum said. “For July, we’re kind of easing back into it.”

More programs and events are planned for August and September.

Landmark Park, located off U.S. Highway 431, is taking precautions like limiting the size of classes and encouraging attendees to wear face coverings and social distancing as much as possible. With the limits on sizes, those who want to attend a program — typically free with paid gate admission — are asked to register in advance at the park’s website, landmarkparkdothan.com.

Visitors have been good about wearing masks and social distancing, Stakelum said. The park has provided masks for employees.

“We’re just making the modifications that we need to and taking it day by day,” Stakelum said. “We know it could change. Tomorrow, it could be a whole new set of rules and regulations.”

Visit dothaneagle.com to watch a video on the most recent Wacky Wednesday program on building Gnome Homes.

Wacky Wednesday activities are free with paid gate admission ($4 for adults, $3 for kids, free for park members and children ages 2 and under). Seating is limited and registration is required. Visit www.landmarkparkdothan.com to register and find more information on all the park’s programs.

Participants can learn how to do different experiments made with ingredients found in their home such as edible slime, making your own orange soda, and much more.

Whether a wild fire or hurricane, disasters can hit at any time. Join Landmark Park and WTVY’s meteorology team to look into the world of natural disasters. Learn the best ways to hunker down and keep your family safe.

Study: Access to nature is linked to improved mental health

Study: Access to nature is linked to improved mental health

There are always dogs and cats in need of good homes at the Dothan Animal Shelter. And kittens.

Here are the health scores for food and lodging establishments May 17-28 as provided by the Houston County Health Department. A score of 1 mea…

Colton Wise works on his gnome home at Landmark Park.

Children create their own gnome homes during Wacky Wednesday at Landmark Park.

Susan Holmes watches as her grandson Bradley Morris applies glue to the base of his gnome home during Wacky Wednesdays at Landmark Park.