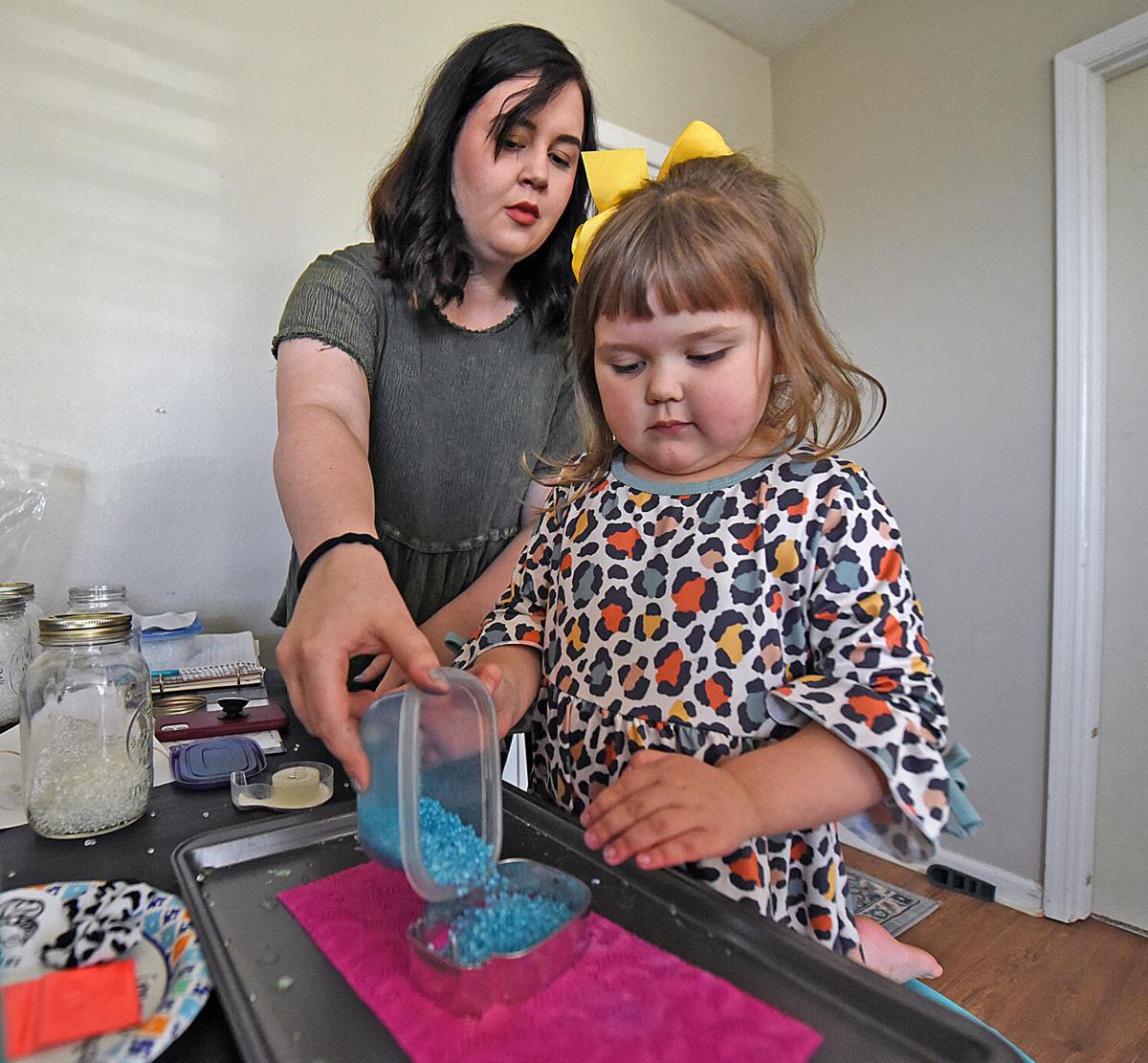 Lindsay Connell and her daughter Caileigh, 4, pour ingredients into a mold to make a freshie inside of their home on Feb. 8. 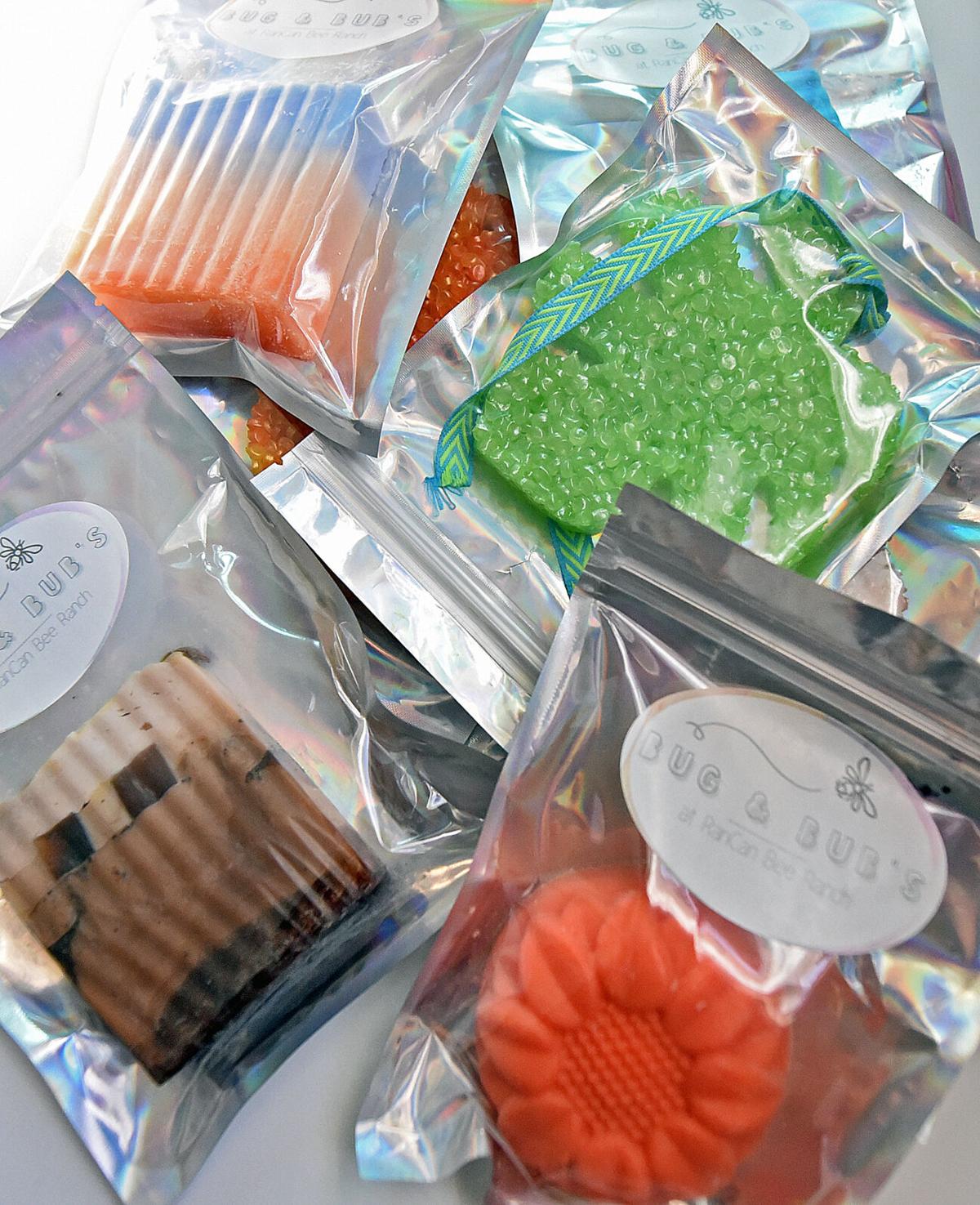 An assortment of molded freshies from Bug and Bub's.

MALVERN – Freshies sold by Bug & Bub’s are made with aroma beads, scented oils, and a selection of colors. Other ingredients, as described by 4-year-old Bug, include something sparkly, some sprinkles, and kisses.

Among her duties, Bug – a.k.a. Caileigh Connell – puts in drops of scented oil and adds color to aroma beads. She enjoys all the tasks involved with making freshies, she said.

Pregnant with her second child, Lindsay Connell was looking for a craft project to occupy her daughter during their isolation in the early weeks of the COVID-19 pandemic in Alabama. The project became a little business making freshies – named for the family nicknames given to Caileigh and her younger brother, Samuel.

“I thought they were great but I made them with my kids so I was biased,” Connell said of the freshies. “When we first started, we really just made big batches of whatever she wanted to do.”

But people responded by buying them.

For the unfamiliar, a freshie is an air freshener made from tiny aroma beads. Scented oils are added to the beads, which are then stored in Mason jars to cure until the scents are fully absorbed. Colors are also added. The beads are poured into cookie-cutter molds and baked so the beads will stick together to keep their shapes. From there, it’s just a matter of hanging your freshie from your vehicle’s rearview mirror or wherever else you want the scent. They last up to three or four weeks or even three to four months depending on the fragrance.

Connell, who works at Rituals, started making soaps when she was pregnant with Caileigh, using honey from her beekeeping parents. Connell still makes soaps, but Caileigh can’t help as much because of the high temperatures used in the process.

“She’d pick out smells and she’d pick out colors and give me ideas but couldn’t really touch, and she wanted to touch,” Connell said. “I’m a Pinterest junkie, and these freshies started popping up on Pinterest.”

Unlike soap, the freshies only have one hot part in the process. After some research, Connell ordered supplies. With businesses hurting during the pandemic, it was important to Connell to buy from companies based in the U.S. The smaller the supplier, the better, she said.

“We started doing it and she loved it,” Connell said of Caileigh. “She likes to shake the beads – that’s her favorite part. She’ll put the oils in. We let her use a little dropper because I learned very quickly not to let her pour. She will just pour the whole thing. So she puts drops in there and puts little kisses in it, close it and then shake them all up and she gets excited.”

The aroma beads are actually more like a plastic than a wax bead and have a higher melting point – an important aspect for a freshie to survive an Alabama summer hanging in a car windshield.

Caileigh’s younger brother, Samuel, was born in April 2020 and is now 9 months old. Known affectionately as “Bub,” Samuel supervises the mother-daughter activity from a safe distance.

When she and her husband, Dylan, discussed business names, they chose Bug & Bub’s since the small business was for the children anyway.

Small freshies sell for $5 while larger ones go for $8. Custom designs can be added for an additional $2. People typically place orders through the Bug & Bub’s Facebook page.

Along with seasonal smells during the holidays, the freshies come in scents that have become customer favorites such as the citrus-inspired Butt Naked or the Victoria’s Secret-like scent Love Spell. There’s also Beach House, Honeydew Melon and Fruit Slices. Or, you could go with Froot Loops, Blue Volcano, Blueberry Muffin, and New Car.

And then there’s Caileigh’s favorite – Monkey Fart. It smells like candy, Caileigh said.

“It smells super strong,” she said.

PennyWise Episode 5: How to Prioritize Your Debt Payments

Why masks could still be necessary in 2022

Why masks could still be necessary in 2022

The best dog breeds for families with kids

The best dog breeds for families with kids

The old-world craft of cast iron takes new forms in the latest exhibit at the Wiregrass Museum of Art.

The sixth annual Adam Deese Boston Butt and Rib Sale will be held in the parking lot of the old southside Kmart property (now Ollie’s) on Thursday, Feb. 25, through Saturday, Feb. 27.

Hearts honor those with dementia and their caregivers

Paper hearts hang along a fence behind First United Methodist Church in Dothan, lining a small section of Burdeshaw Street with a kaleidoscope…

Ash Wednesday begins a season of repentance for Christians around the world. They will fast and give up things they love in order to focus on …

Lindsay Connell and her daughter Caileigh, 4, pour ingredients into a mold to make a freshie inside of their home on Feb. 8.

An assortment of molded freshies from Bug and Bub's.