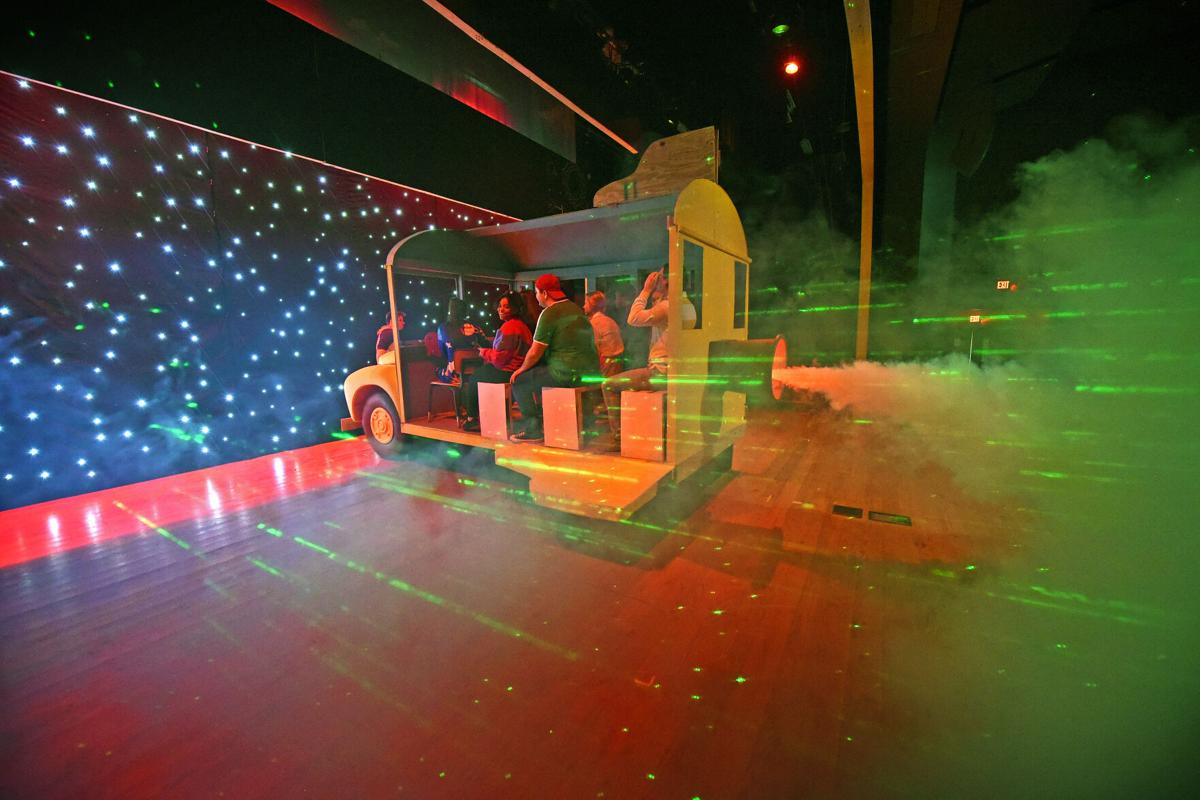 Members of the Wallace Community College’s theater department rehearse for the musical, “The Magic School Bus” on Tuesday. 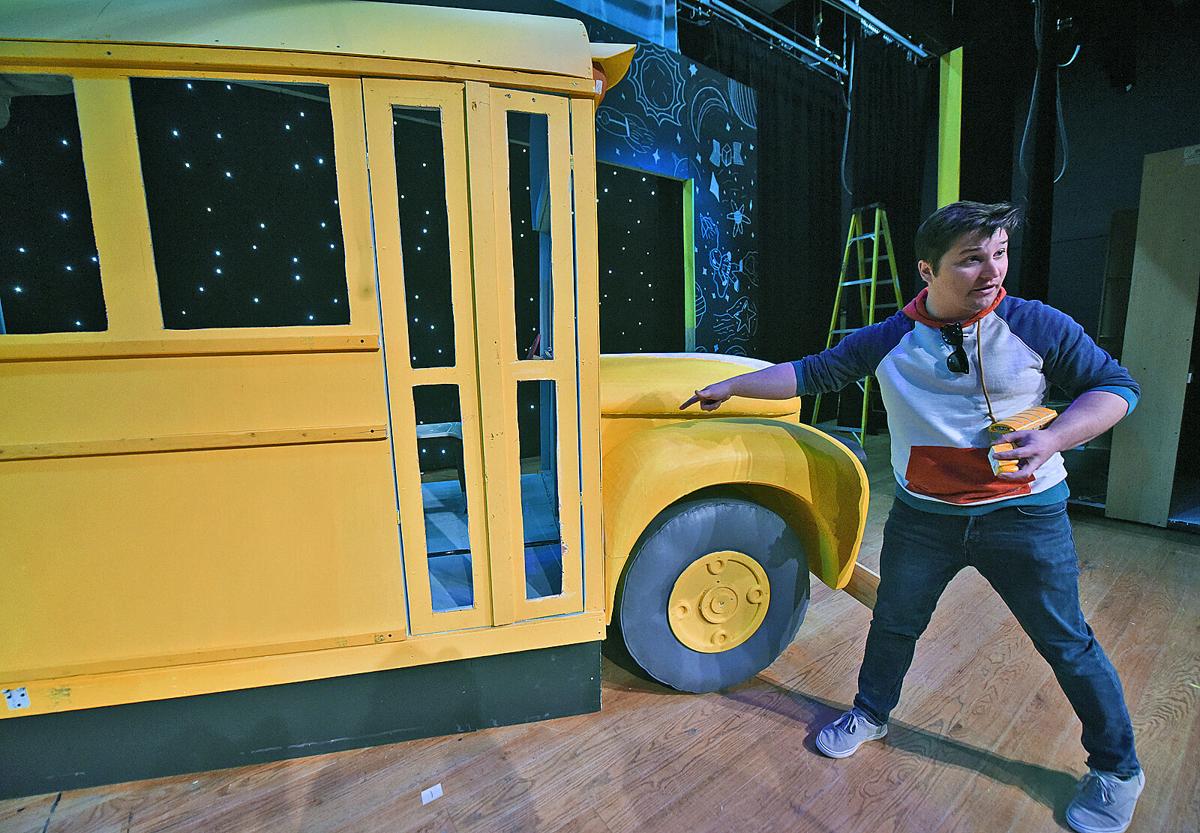 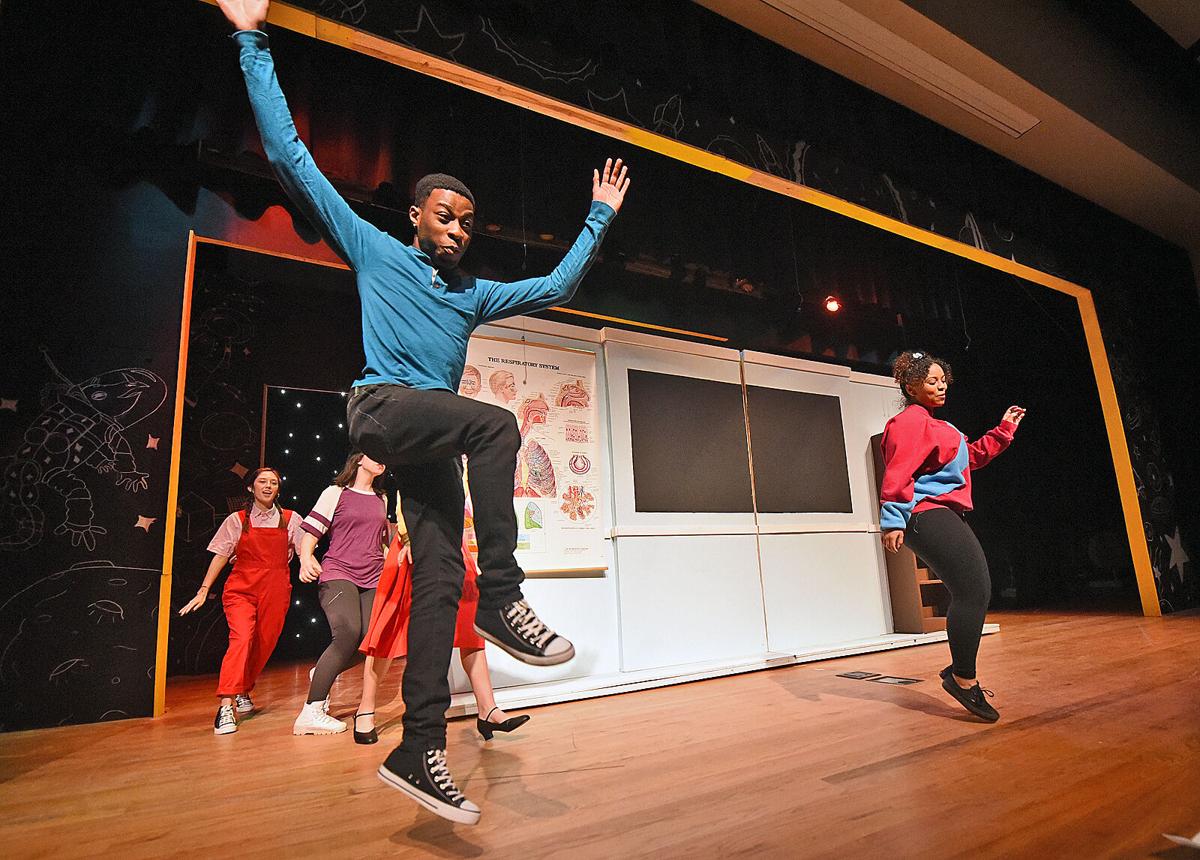 Members of the Wallace Community College’s theater department rehearse for the musical, “The Magic School Bus,” inside of the Bencze Theater on Tuesday.

When the house lights go down and “The Magic School Bus” makes its debut this week at Wallace Community College in Dothan, there will be set pieces built with a mix of old-school carpentry, free-hand artistry, and 3D printing ingenuity.

The front of the school bus for one was created in large part with 3D printers purchased by the theater department. The curved fenders, bumpers and hood, as well as the amber lights, headlights, and hubcaps, were all printed in smaller pieces and then put together like jigsaw puzzles. They were bonded, sanded, and painted by students to give the finished look.

One fender took more than a week just to print with multiple printers.

Producing set pieces with 3D printers opens up a new realm of possibilities for theater programs like the one at Wallace, said Zac West, who is serving as the technical director for “The Magic School Bus.” West has worked with Wallace theater director Charles Sirmon in the past creating elaborate costumes and set design for productions. The 3D printers allowed a new approach to set design at the community college.

Based on the books and animated television series, “The Magic School Bus” takes young audiences on an educational journey with Ms. Frizzle’s class as their school bus transforms into a rocket ship for the ultimate field trip into space.

Tickets are $5 for students and $10 for general admission with performances on Nov. 18 and Nov. 19 at 7 p.m. and Nov. 20 at 2 p.m. and 7 p.m. at the Bencze Theater inside Cherry Hall on the Wallace Community College Dothan campus. Tickets can be purchased at www.wallace.edu.

A 3D printer uses materials – typically heated plastics – to create a three-dimensional object one layer at a time, according to the U.S. Department of Energy. A 3D blueprint for the object is created with computer-aided design software. With the Wallace 3D printers, a jump drive containing the computer blueprint is plugged into the printer and a nozzle deposits layer after layer onto a glass platform. Each layer solidifies before the next layer is printed directly on top of it. The process continues until the object is fully printed.

Such printers have come down in price since they first came out. Smaller tabletop printers like the ones at Wallace can run from $500 to $1,000.

Making the pieces for “The Magic School Bus” started in late July.

First, West had to print a scale model (which took five hours), and from there he scaled up using 3D software to program the printers for the larger pieces needed to make the bus.

While it can take hours or days to print an object, West said the printers free up theater and art students to work on other things for a production. Plus, he said, it allows the theater department to easily create multiple items that all need to look the same.

The completed school bus on the stage in Bencze Theater will actual pivot in a circle as it “transforms” from a school bus to rocket ship, with water-based stage smoke spewing from a rear engine, a starry backdrop of lighting and a series of proscenium arches framing the stage with freehand drawings by Wallace freshman Ashiah Brown.

Wallace theater director Charles Sirmon said using 3D printing is one way the theater department is trying to expand its technical theater arts program. Sirmon said the department used money from past ticket sales to buy the printers. Students, he said, are learning new skills and using math skills they may have never thought they’d use otherwise.

Sirmon said more and more students are expressing an interest in learning the technical side of theater set design.

Audrey Huff, a Wallace sophomore, got into theater after seeing the department’s production of “Cinderella” and was so impressed with the costuming and set design that she wanted to be a part of it. Not only has she worked on the set, she’s also playing one of the “Magic School Bus” students.

“I thought it was really cool being able to see everything in a bunch of little pieces, and honestly getting printed and it coming from nothing, and then everybody doing their part and putting it all together,” Huff said. “It’s just so cool how with the help of everybody we had nothing and now we have this.”

The architect trying to finish the Sagrada Familia after 138 years

The architect trying to finish the Sagrada Familia after 138 years

Trio of planets to join the moon on Dec. 10

Trio of planets to join the moon on Dec. 10

Dothan’s Southeast Health no longer aids victims of sexual assault by providing rape kits at its hospital. In a statement, it blamed a shortag…

Landmark Park gives visitors a glimpse of what life would have been like in the Wiregrass in 1900, at the turn of the 20th century.

Members of the Wallace Community College’s theater department rehearse for the musical, “The Magic School Bus” on Tuesday.

Members of the Wallace Community College’s theater department rehearse for the musical, “The Magic School Bus,” inside of the Bencze Theater on Tuesday.