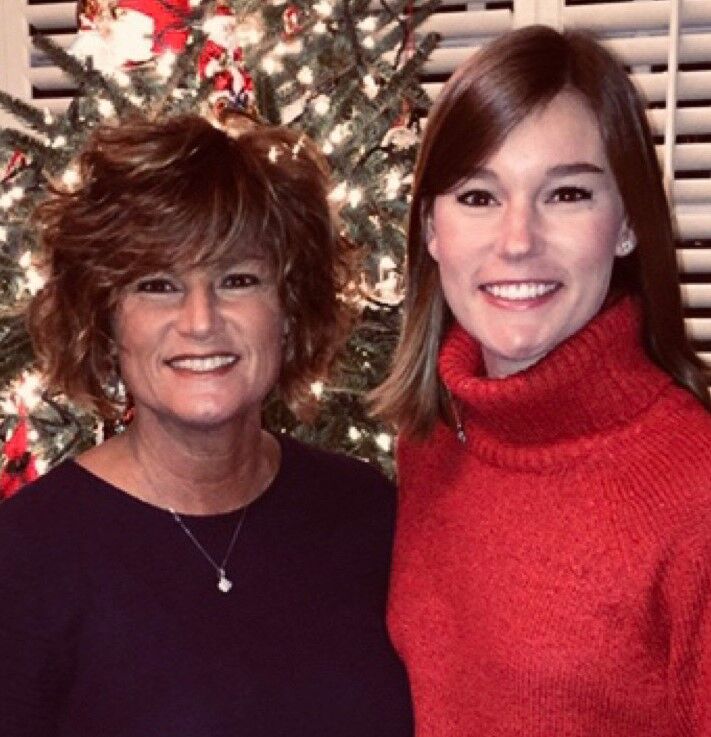 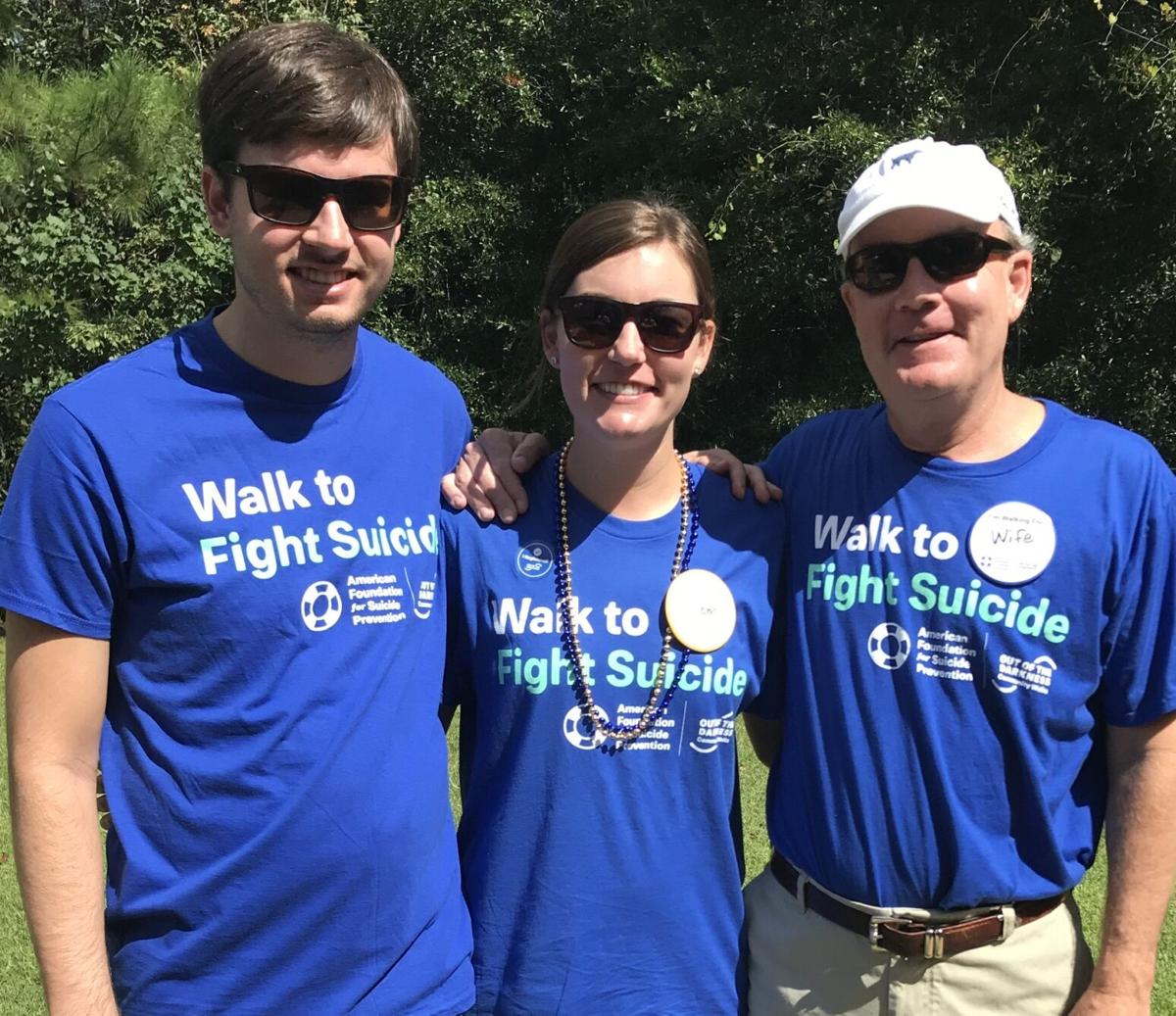 Madison Blount with her brother, William Blount, and her father, Bill Blount III.

Her father had been in and out of assisted living, and her father-in-law was diagnosed with terminal cancer. As the full-time elementary school teacher dealt with those challenges, her anxiety descended into depression.

It was a struggle the 57-year-old lost to suicide about eight months later.

Her daughter, Madison Blount, says people have described suicide as like a feeling of being in a burning building.

“You’re either going to burn alive or you’re going to jump,” Madison said.

Sometimes people feel like taking their life is the only way to remove that pain.

When Justin Barfield, a family friend who lost his wife Blayne to suicide on March 12, 2015, approached Madison about being part of a foundation he was starting to help people going through similar struggles, she leapt at the opportunity.

Madison wants people to know that if they’re struggling with suicidal thoughts, they’re not alone. The foundation she helped organize is holding a fundraiser this Saturday in downtown Dothan to raise awareness for suicide prevention and to help people learn more about mental health disorders, emotional distress, and other contributors.

The goal and mission of the Blayne Hardy Barfield Foundation is to aid in the reduction and prevention of suicide while promoting mental health awareness. A big part of that is removing the stigma often associated with mental illness.

The changes Cindy went through in early 2017 indicated she had an anxiety disorder – a medical condition as real as diabetes or heart disease.

Depression is a condition in which a person feels sad, hopeless, unmotivated, or discouraged. It often causes a lack of interest in activities he or she used to look forward to.

Madison said her mother possessed a bubbly personality with a loving and caring disposition. She was a member of First Baptist Church where she was active in the choir, children’s ministry, and Barbara Cook’s Sunday School Class.

“My mom was a very energetic person,” Madison said. “She had a very loud laugh.”

She taught in the Dothan city school system for 34 years and was passionate about her job and about making sure that those children had a chance to learn.

Madison said Cindy felt like “God put her on this earth to help those children.”

When her father-in-law died in March 2017, Cindy began to notice changes in herself. Madison said Cindy was 18 when her mother died from cancer, and watching someone else she loved die from cancer likely rekindled those memories.

“She was open about it,” Madison said. “She didn’t really understand why, but she knew that she didn’t feel like herself.”

Cindy sought treatment, but finding the right doctor and medication for an anxiety disorder can take time.

“She kept having to get it changed because nothing seemed to be working,” Madison said.

Madison said Cindy was at school one day when the principal called her husband to come and get her.

“She (Cindy) just kind of had had enough,” Madison said. “I think she was so overwhelmed with how she was feeling. She couldn’t give 110 percent at work, like she always does.”

She didn’t go back to work after that.

“I think that feeling of not being able to give it all she had, I think that really hurt her,” Madison said. “It really put her into a major depression.”

Cindy no longer found enjoyment in things she loved to do, like going to the beach. When she went one time and ended up coming right back home, “that’s when we kind of knew,” Madison said.

“She became kind of a different person, and that’s just part of what depression can do to you,” Madison said. “She became so ashamed of how she felt. When she admitted that she was having thoughts of suicide, we were shocked. I knew she was feeling down and I knew she was not herself and I knew there was severe anxiety. It was not just in her head, it was physical. You could see her just anxious, not be able to calm down.”

Cindy’s family tried to help. “We were all with her through all of this,” Madison said.

But it wasn’t enough.

“Suicide is part of my mom’s story, but it doesn’t define her life,” Madison said.

Grief is a process, Madison said, and being on the foundation’s board “helps me to feel like I’m doing something that’s making a difference.”

WHAT: The 2nd annual “BHB Bash”

WHERE: The Plant, 308 N. Saint Andrews St. in downtown Dothan

WHY: Proceeds will benefit local agencies that support the Blayne Hardy Barfield Foundation’s mission to promote the importance of mental health and the awareness of suicide prevention

ENTERTAINMENT: Los Locos, Brett Stafford Smith, and Glory Days will be on stage

TICKET OPTIONS: General admission tickets are $10, one kid 10 and under free with each paid ticket

ACTIVITIES: Inflatables, Bobert the Balloon Guy, face painting, corn hole and more. Various items will be up for silent auction including a 3-night vacation on 30A, a Friday night rental of The Grand on Foster Street, local art, a turkey hunt, a boat cruise, etc. T-shirts and koozies will be for sale. Food trucks including Dothan Ice Cream, Tikiz Shaved Ice, and Wok n Soul will be on site.

DONATIONS: If you are unable to attend the event but would like to make a donation, go to www.bhbfoundation.org

A Georgia man caused chaos in Dothan when he went on a crime rampage early Wednesday morning that culminated into a police standoff on Denton Road.

Police arrested a Dothan woman for using an acquaintance’s information to take out $20,000 in loans to pay off her student loan debt.

MIDLAND CITY — A man and woman are charged with murder in the death of a Montgomery woman found dead near a Dale County bridge.

GENEVA—Multiple law enforcement agencies partnered Tuesday to arrest more than 30 people on drug-related charges in and around Geneva County, …

A Dothan man was arrested for using his car to strike his ex-girlfriend’s car as she tried to leave.

A Dothan man was nabbed by police after using a torch to burn down his roommate’s door.

A plan to guide and devise strategies for development of Dothan’s Highway 84 East corridor has been set in motion.

A Dothan lawyer is hoping to take her expertise to the circuit court as judge representing Houston and Henry counties.

Three killed in I-10 wreck in Holmes County

Three people were killed Wednesday morning in a one-vehicle accident on Interstate 10 in Holmes County.

A Geneva man is dead after a vehicle he was in struck a tree in Dale County.

Madison Blount with her brother, William Blount, and her father, Bill Blount III.