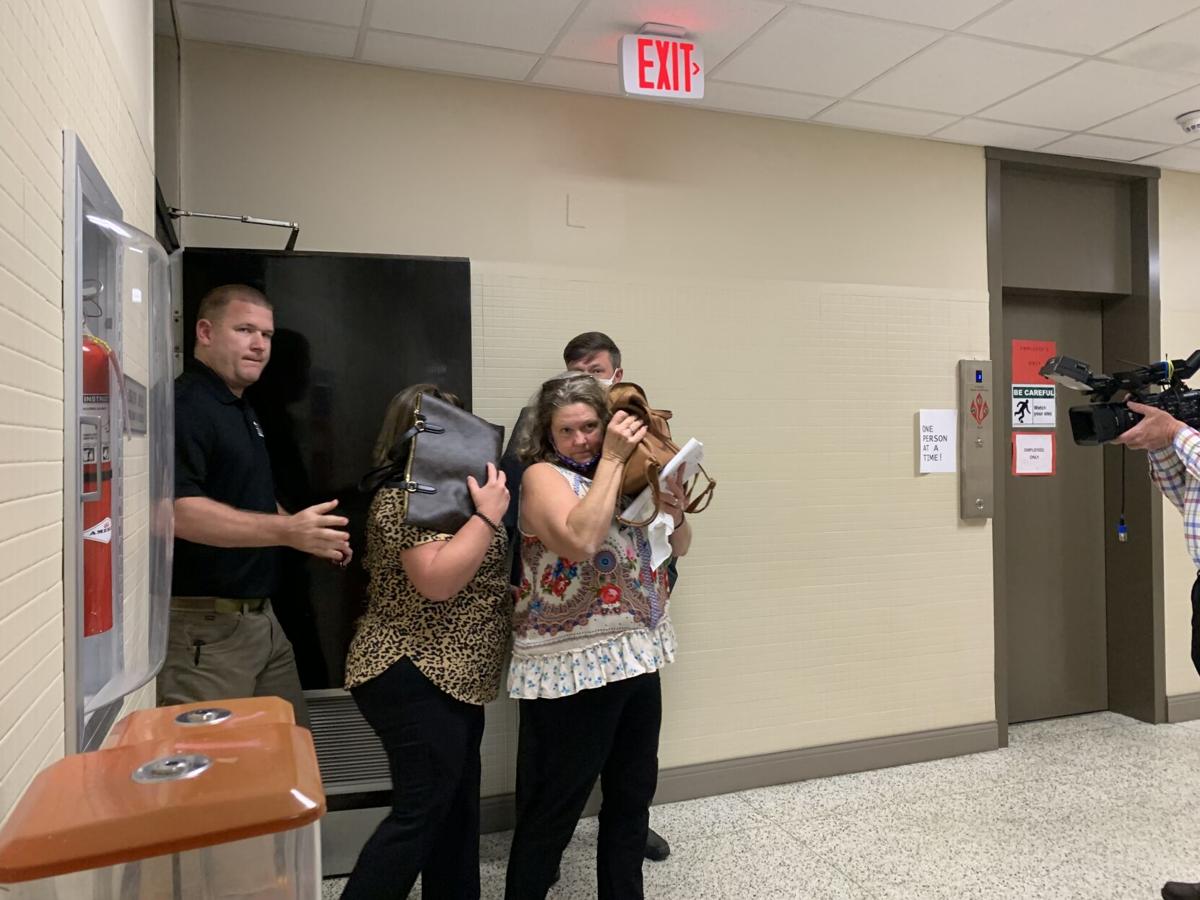 Brandy Murrah is seen shielding her face with her purse while her mother blocks her from a television camera as she is escorted from a Dale County courtroom following her sentencing hearing. 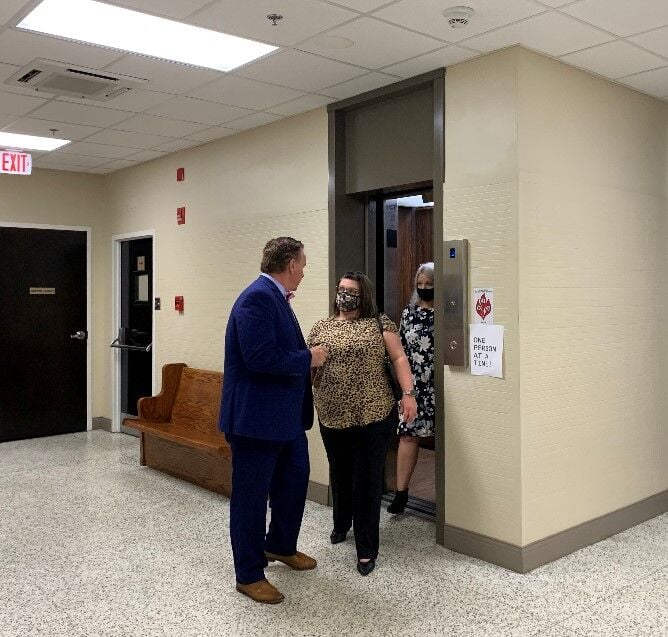 Brandy Murrah, center, is seen getting off an elevator at the Dale County Courthouse with her attorney David Harrison prior to a sentencing hearing on Thursday.

OZARK – Witnesses painted different pictures of Brandy Murrah during a Thursday sentencing hearing at the Dale County Courthouse. Parents said she stood by callously while their children were kept from them due to drug test reports that Murrah falsified. Murrah’s current employers described her as a hard worker who was dependable and caring.

Murrah’s attorney, David Harrison, argued she should get community corrections or probation over prison.

In the end, Judge William Filmore decided Murrah, the former owner of an Ozark lab test collection company, will spend 15 years in prison after hearing testimony from those who said she falsified lab reports that led to their children being taken away.

Murrah pleaded guilty in September, agreeing to 15 years on a felony charge of perjury and 12 months on each of 16 misdemeanor counts of forgery to run concurrently.

“I know I did wrong,” Murrah told the judge before he announced his decision. “I’ve done a lot of things wrong in my life… I’m sorry for anyone I ever hurt. I really did not do this intentionally to ever hurt anyone.”

District Attorney Kirke Adams said Murrah should go to prison for the suffering she caused.

“She has committed a fraud upon the whole court system,” Adams said.

Murrah was arrested by Ozark police in 2019 on charges she falsified the results of drug screenings handled by her lab, A&J Lab Collections, which was providing drug-screen reports and paternity tests to the Dale County Department of Human Resources.

The perjury charge came out of a court hearing where Murrah testified about the drug test results on a father who was trying to retain custody of his children. The forgery charges stem from falsified reports that had never actually been processed and confirmed by the doctor listed.

Jennifer Severs of Troy was in a custody battle with her ex-husband when Murrah collected hair follicle samples for drug screenings on the family as part of the custody case. The test showed Severs was positive for drugs even though Severs said she doesn’t use any drugs. Additional tests were negative, but Severs said it still took months before she was finally reunited with her children because the Department of Human Resources used the original test results. It was Severs who actually contacted a doctor listed on Murrah’s report only to learn that the doctor had never done the screening. She then contacted the Ozark Police Department.

Severs said the experience scarred both her and her children.

In 2017, Grace Locke of Newton had her two children taken from her due to her drug use. She eventually entered rehab following an arrest. By 2019, Locke said she was clean and wanted to be reunited with her two older children after giving birth to her third child. But when she met with her case workers from the Department of Human Resources in Dale County to talk about a plan to regain custody, she received the news that her latest drug test had come back positive for methamphetamine and her baby’s test showed exposure. Her 3-month-old baby was taken from her during the meeting.

She was tested again with negative results, but her baby was taken away from her for nearly three weeks.

“I don’t understand why anybody would ever do that to any family, any children, for no reason,” Locke said.

Are aliens not coming to Earth because of the cost?

Are aliens not coming to Earth because of the cost?

What is that mysterious 'blinking' object in space?

What is that mysterious 'blinking' object in space?

A body deputies found in the woods near Newton last week has been identified as a Montgomery woman.

Three years ago, a Dothan woman’s life was upended when her former boss accused her of stealing venue deposits from his business. Now, she wan…

A Dothan man was arrested for intentionally striking a woman with his car.

OPP – A head-on collision involving a commercial vehicle claimed the life of an Opp woman here on Tuesday.

Dothan man gets 5 years for possessing guns with felon status

A U.S. district judge has sentenced a Dothan man to five years in federal prison for possessing firearms after a felony conviction.

ASHFORD — An Ashford man has been arrested for a Wednesday night shooting that sent one to the hospital.

5 sent to hospital in three-vehicle crash near Cottonwood Corners

A Dothan man has been charged with the attempted murder of his cousin, who remains in the hospital in critical condition.

An assistant district attorney for Houston and Henry counties is running for circuit judge.

Brandy Murrah is seen shielding her face with her purse while her mother blocks her from a television camera as she is escorted from a Dale County courtroom following her sentencing hearing.

Brandy Murrah, center, is seen getting off an elevator at the Dale County Courthouse with her attorney David Harrison prior to a sentencing hearing on Thursday.