Get our local education coverage delivered directly to your inbox. 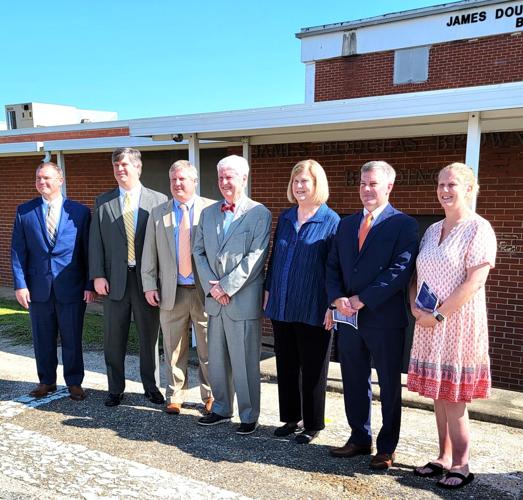 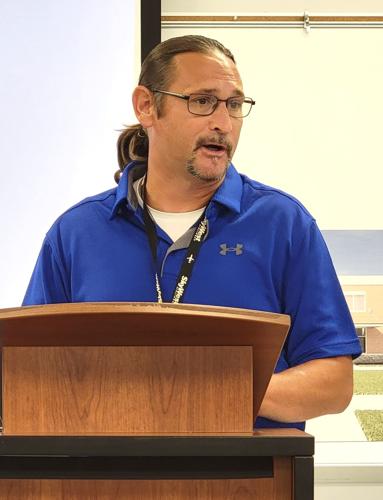 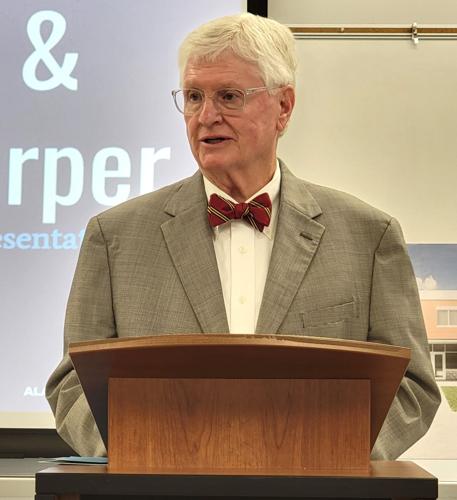 OZARK — A $5 million revitalization project for the historic Brown Building on the Alabama Aviation College Campus in Ozark officially kicked off Thursday.

Educators, civic leaders, and elected officials joined the family of the late James Douglas Brown Sr., a two-term former mayor of Ozark for whom the building is named, to officially celebrate the start of a revitalization project on the building built more than 60 years ago.

Those present at the ceremony Thursday included Brown’s daughter, Tina Brown Harper; her husband, Charlie Harper; their sons, Chris and Charles Harper; their daughter, Katheryne Lancaster; and Todd Lancaster. “The vision that your father and grandfather had for this community is special,” Enterprise State Community College and Alabama Aviation College President Danny Long told the family members.

“We are so humbled by what this undertaking represents and that our family is still part of the college,” Brown’s son-in-law, Charlie Harper, said. “We’re grateful for the continued recognition of Mr. Brown and his work,” Harper said. “The college has been a significant part of all our lives here in the Wiregrass. It has changed lives. Douglas would be so proud to see how the college has grown.”

The Alabama Aviation College has a long history of meeting industry needs, dating back to 1954 with the establishment of Fort Rucker as the Army Aviation Center, said Long. Originally named the Alabama Institute for Aviation Technology, the college began with one brick building, set next to Blackwell Airport.

Long said the building was designed as a combination maintenance hangar, classroom, and administration building. “It was an idea conceived by the city of Ozark to address the existing shortage of trained and skilled aviation technicians through adult education classes at night,” he said.

It was operated by the Ozark City School system until 1962 when it was absorbed into the state’s vocational and technical education program and became supported through state and federal funds. Also in 1962, the Federal Aviation Administration gave formal recognition to the courses taught at the school, which led to approval for veterans training under the G.I Bill.

An open house for the aviation school was held on Aug. 28, 1960 in conjunction with the dedication of Blackwell Airport by the city of Ozark. The first classes were held on Oct. 3, 1960 with 188 students enrolled. Brown is largely responsible for the aviation college’s existence, Long said. “Almost 70 years ago, his was a vision to meet the workforce demands of this area.”

“We look at these buildings and this campus as our home,” said Chris Henderson, a graduate of the aviation college who now serves as aviation maintenance division co-chairman and an instructor at the school. “I can’t think of enough words to express my gratitude for the decision to save and revitalize this building and I’m sure many past graduates and instructors feel the same way I do. It’s more than just a building to me and to the many alumni that passed through its doors over many years.

“Keeping this building a part of our campus is so vitally important to me and others who have passed through these doors,” Henderson said. “This is where I began my journey in the aviation maintenance industry, first as a student and now as an instructor.”

Henderson described “grabbing a quick power nap” after working third shift at the nearby aircraft maintenance company before attending classes at the aviation college an hour later. He graduated in 2002, returned as an adjunct instructor in 2006 and became fulltime in 2008. “And all the classes I taught were in the Brown Building,” he said.

“I’ve been a part of this college in some capacity for going on 20 years,” he said. “I have a lot of fond memories centered around the Brown Building and this campus, as do hundreds of students who have passed through those doors and who continue to pass through those doors.”

Get our local education coverage delivered directly to your inbox.

Behind the Headlines: Investigating the Catholic Diocese of Buffalo

AIDS in Kenya: Homabay County, where fish are traded for sex

AIDS in Kenya: Homabay County, where fish are traded for sex