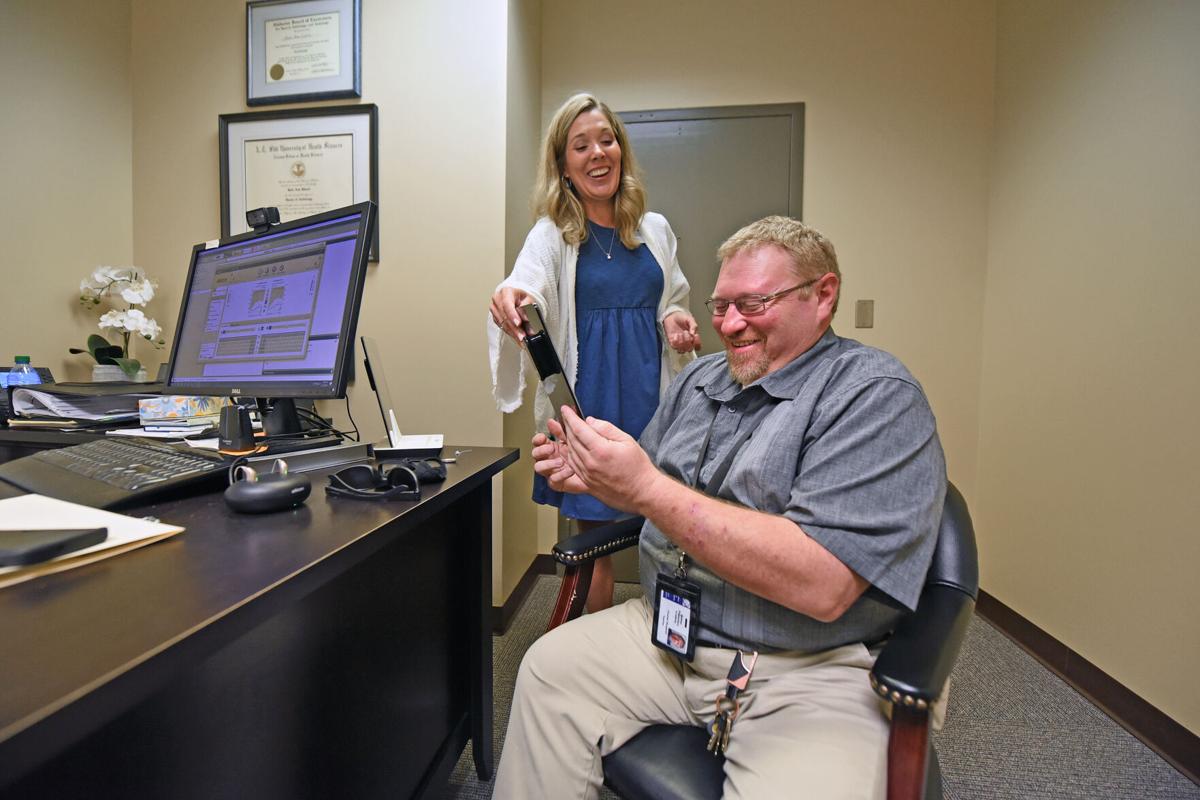 Audiologist Julie Ann Rikard shares a laugh with Charles Wingfield after he receives his new hearing aids on Tuesday. 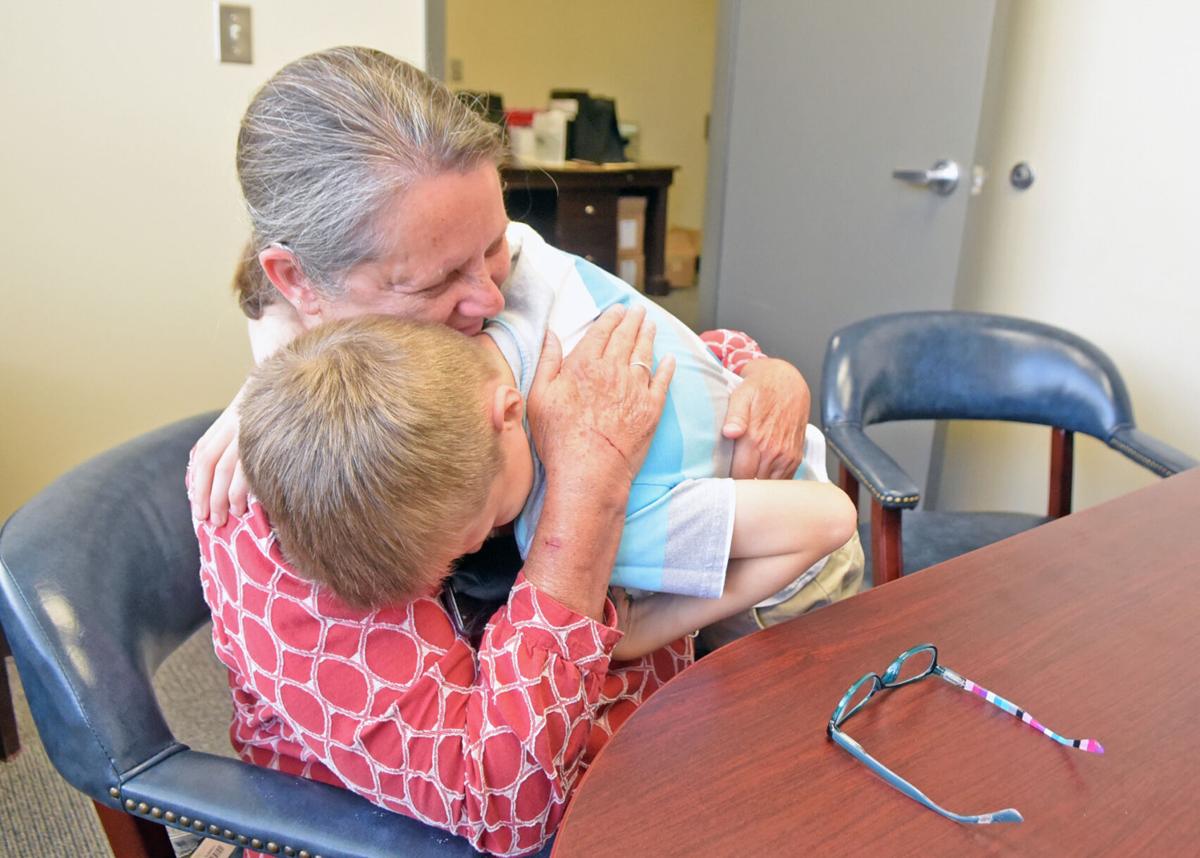 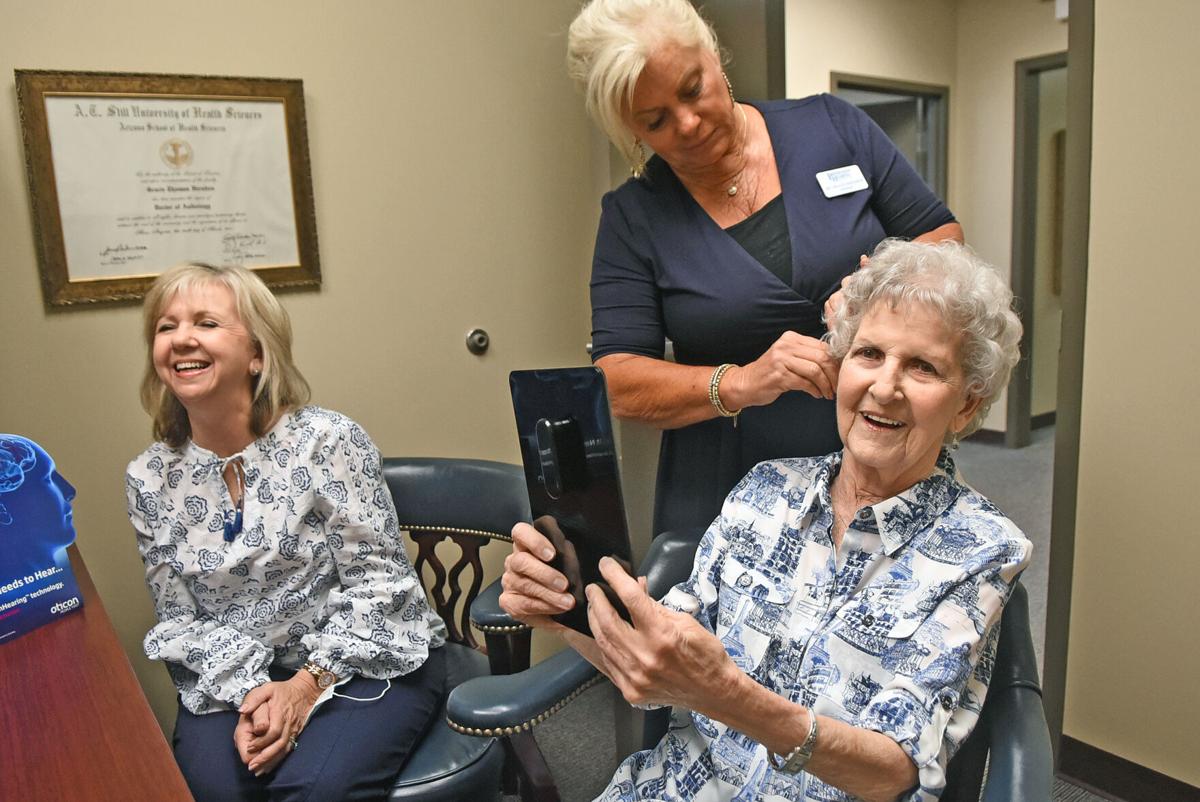 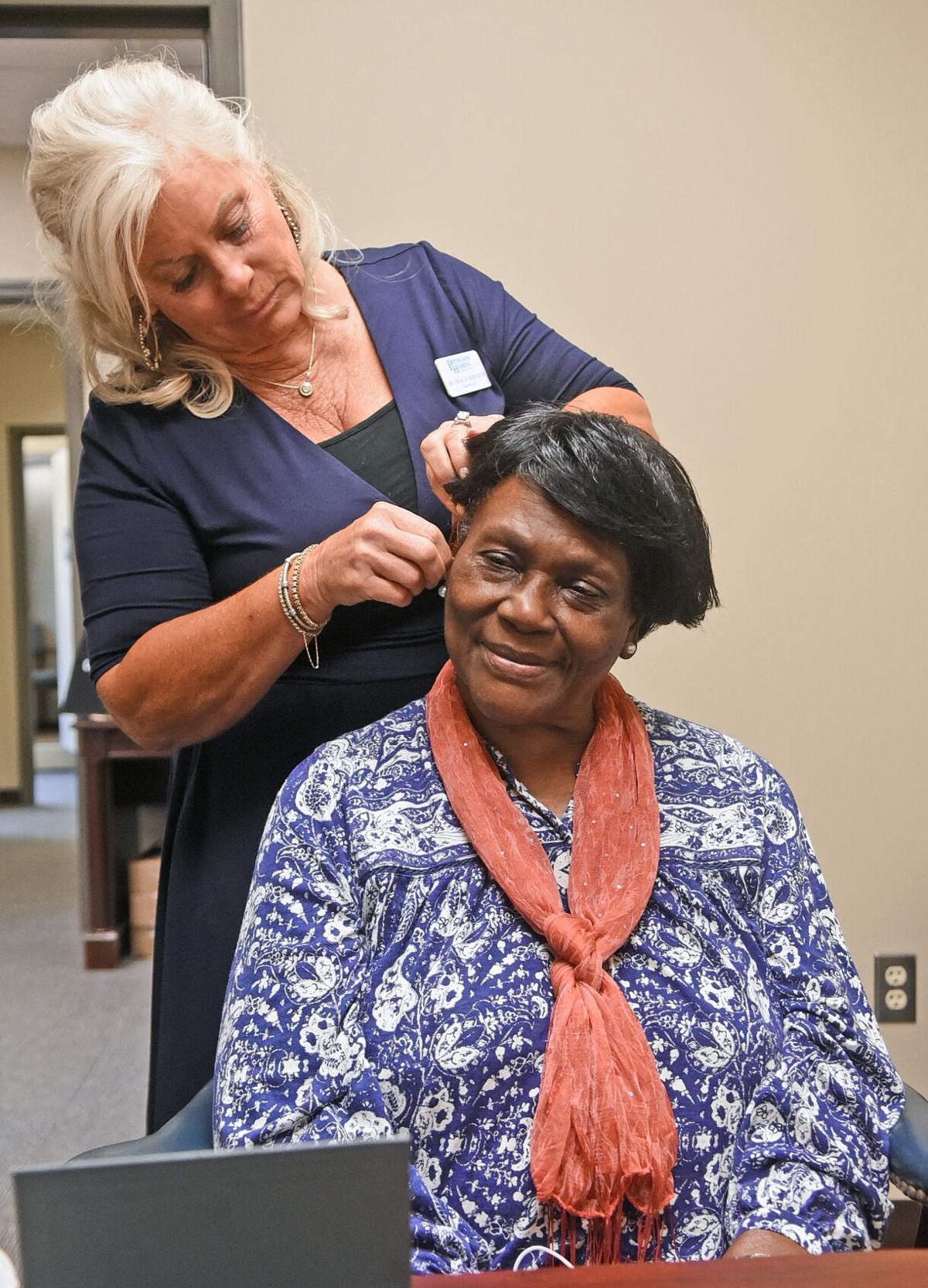 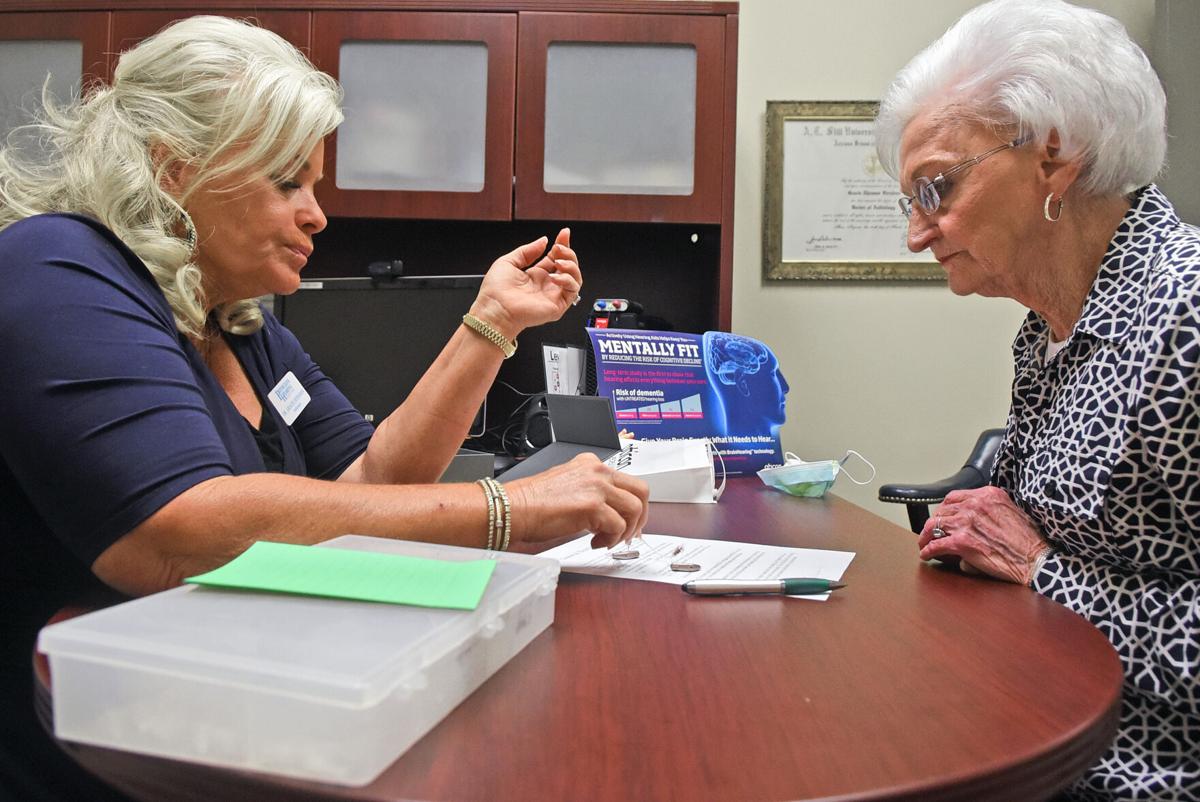 Audiologist Gracie Herndon shows Miriam McKinney how to use her new hearing aids at Physicians Hearing Center on Tuesday. 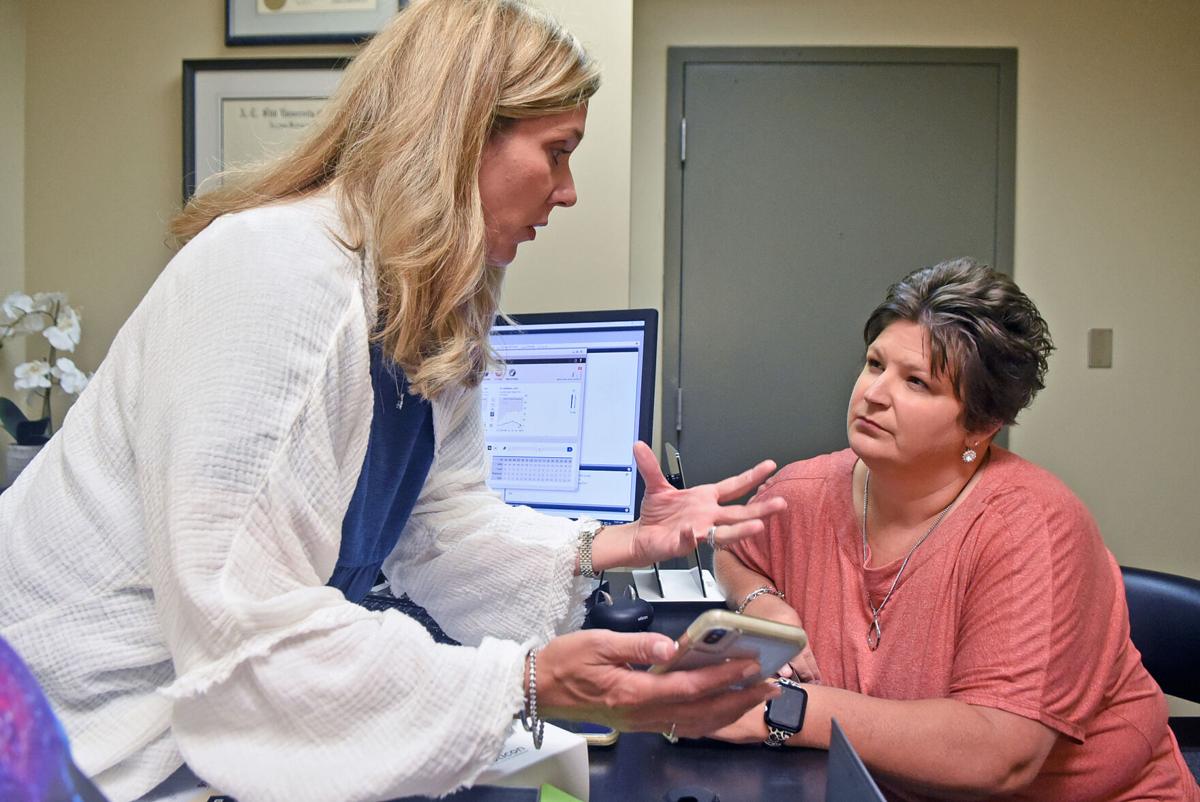 Audiologist Julie Ann Rikard talks with Amy Bell on how to use her smart phone to adjust her new hearing aids.

Sherline Hudson became emotional before she even got her hearing aids.

Miriam McKinney arrived an hour early just to make sure she was on time.

Charles Wingfield was amazed at the sound of voices from the other room.

Minnie Stovall was relieved by what she couldn’t hear.

And Wanda Dollar may finally be able to watch television past 8 p.m.

Six Wiregrass residents all received a free set of hearing devices on Tuesday as the 2021 Physicians Hearing Center and Dothan Eagle hearing aid contest came to an end. The contest, which had 36 entries this year, has been going on for more than 20 years, and contestants either wrote essays nominating themselves or were nominated by someone else.

Sherline Hudson’s grandchildren, who live with her, know to talk to her on her left side since her hearing loss is worse in her right ear than her left ear.

“It’s just been gradual over the last few years, and it’s something you really don’t pay attention to,” Hudson, 64, said. “You do realize there are certain things you can’t hear, like when my grandkids are talking to me. They know they have to sit more on the left side than my right side.”

Like many people, price was a factor in Hudson not getting hearing aids before. Devices can cost from $2,000 to $7,000 for a set.

“I really didn’t realize how extreme the hearing loss was until she did the test on me,” Hudson said.

Miriam McKinney, 86, has had several hearing tests since she began losing her hearing about five years ago.

“I just never could afford them, and I kept hoping they’d come down,” she said.

Crowds are her biggest challenge. In church, she can’t hear anything unless the preacher is speaking directly into the microphone.

“Any sounds around me, I don’t hear,” McKinney said. “I hear noise, but I don’t know what they’re saying.”

During her hearing evaluation at Physicians Hearing Center, McKinney said she didn’t want to give up the demo set they put on her.

“It was like night and day,” she said. “I could hear; there was no background noise or anything. It was just clear as could be… It was like daylight when she put those in my ears.”

At 38, Wingfield is younger than the typical person who needs hearing aids. He’s a seventh-grade math teacher at Dothan Preparatory Academy and a soccer coach. He had always wanted to be a teacher, but didn’t enter the profession until a few years ago. That’s when he started noticing his hearing loss.

Wingfield had never even had a hearing test until he entered this year’s contest. He was missing out on high frequency sounds – birds chirping, for example.

Hearing his students has been a challenge. To compensate, he learned to read lips, but the COVID-19 pandemic and the requirement to wear masks created a whole new challenge for Wingfield.

He’s not sure what caused his hearing loss. There’s no family history and he doesn’t recall being around noises loud enough to damage his hearing.

“I don’t think I did anything terrible; I didn’t attend a ton of concerts; I didn’t play music terribly loud,” Wingfield said.

Amy Bell, 42, said she and her family really began to notice her hearing loss in the past year, although her hearing test indicated that she likely had been losing her hearing since her 20s.

She struggled to hear her family talking, especially if they were in another room. But even if a speaker was only a short distance away, Bell found it hard to follow what they were saying.

“My husband and kids were telling me, ‘You know, you need to do something, you can’t hear,’” Bell said.

Gatherings with family or friends and church services are where Minnie Stovall is looking forward to hearing and listening.

Stovall, 80, developed tinnitus several years ago. Slowly but surely, her hearing worsened as the ringing in her ears grew louder. She worked in a factory for 23 years and feels like the loud machines there likely contributed to her hearing problems.

But when an audiologist turned Stovall’s hearing aids on, she could hear everything clearly except the ringing since hearing aids can mask the noise caused by tinnitus.

“When it first started, it was a big problem for me,” Stovall said.

Wanda Dollar, 84, began dealing with hearing loss about 12 years ago. She had has hearing aids, but the devices were so old, they were doing more harm than good, her daughter, Sheila Thomley, said. Dollar lives at Westside Terrace in Dothan, where her hearing loss prevents her from watching television past 8 p.m. because the volume has to be so loud it disturbs her roommate.

“She can’t enjoy TV or her music or anything,” Thomley said.

Dollar said her hearing loss made it difficult for her to socialize or even hear over the phone.

“You just don’t know,” Dollar said. “You go to a party or you go anywhere – restaurant – you can’t hear nobody across the table.”

Engineers create device that can levitate objects with sounds.

Engineers create device that can levitate objects with sounds.

Dothan man shoots at car in front of police, gets arrested

A Dothan man pulled up next to two dozen officers, shot up an unoccupied car, and was immediately arrested.

Dothan man found with radio tower stolen out of Florida

A Dothan man was found in possession of a mobile radio tower stolen from the Panama City area.

OZARK—An Ozark private investigator is in jail on sex charges after allegedly taking advantage of a female client.

A single-vehicle crash that occurred at 1:20 p.m. Thursday has claimed the life of a Eufaula man.

A Dothan man is being held on a $1 million bond after allegedly breaking into an acquaintance’s home to sexually assault her.

Wicksburg man shot wife, then himself in murder-suicide

A Wicksburg couple is dead after an apparent murder-suicide at their home Wednesday.

The vast majority of the 529 people who have died from COVID-19 since April 1 in Alabama were unvaccinated, according to the Alabama Departmen…

Audiologist Julie Ann Rikard shares a laugh with Charles Wingfield after he receives his new hearing aids on Tuesday.

Audiologist Gracie Herndon shows Miriam McKinney how to use her new hearing aids at Physicians Hearing Center on Tuesday.

Audiologist Julie Ann Rikard talks with Amy Bell on how to use her smart phone to adjust her new hearing aids.