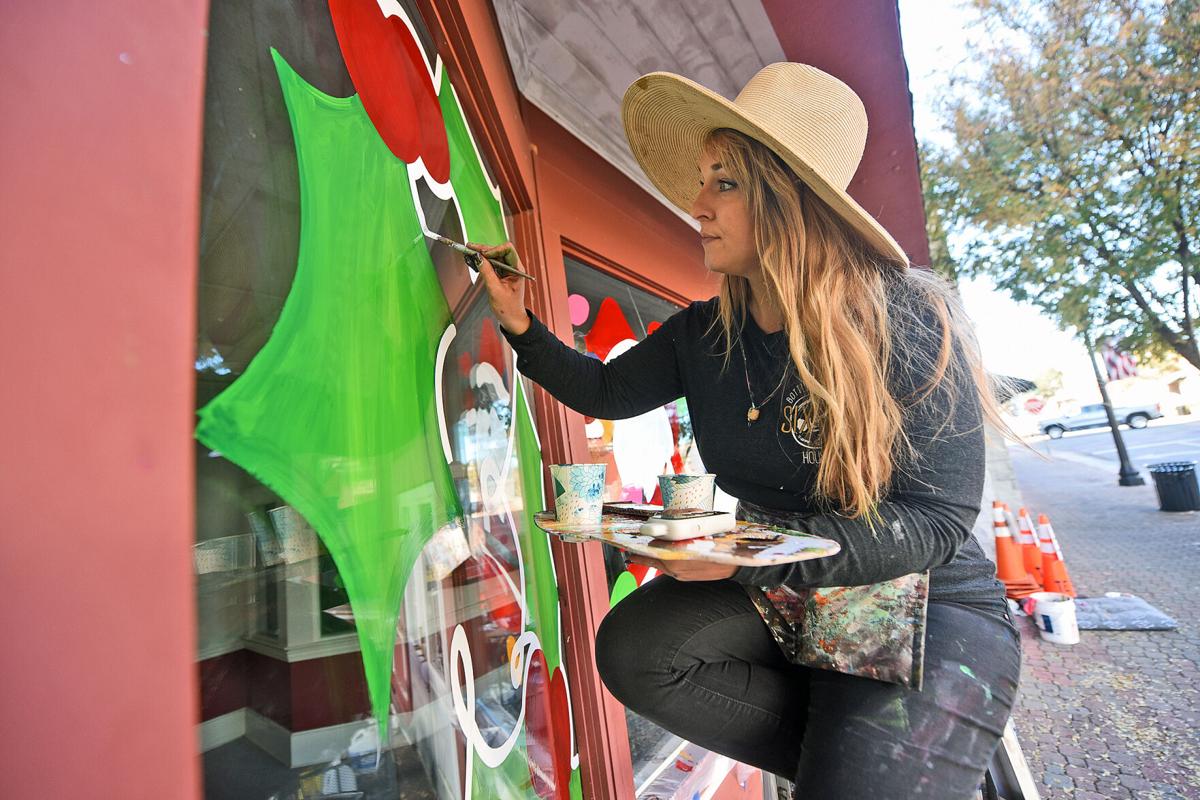 Katie Hughes of Eye Catchers Artworks paints a Christmas theme on a window in downtown Dothan on Nov. 19. 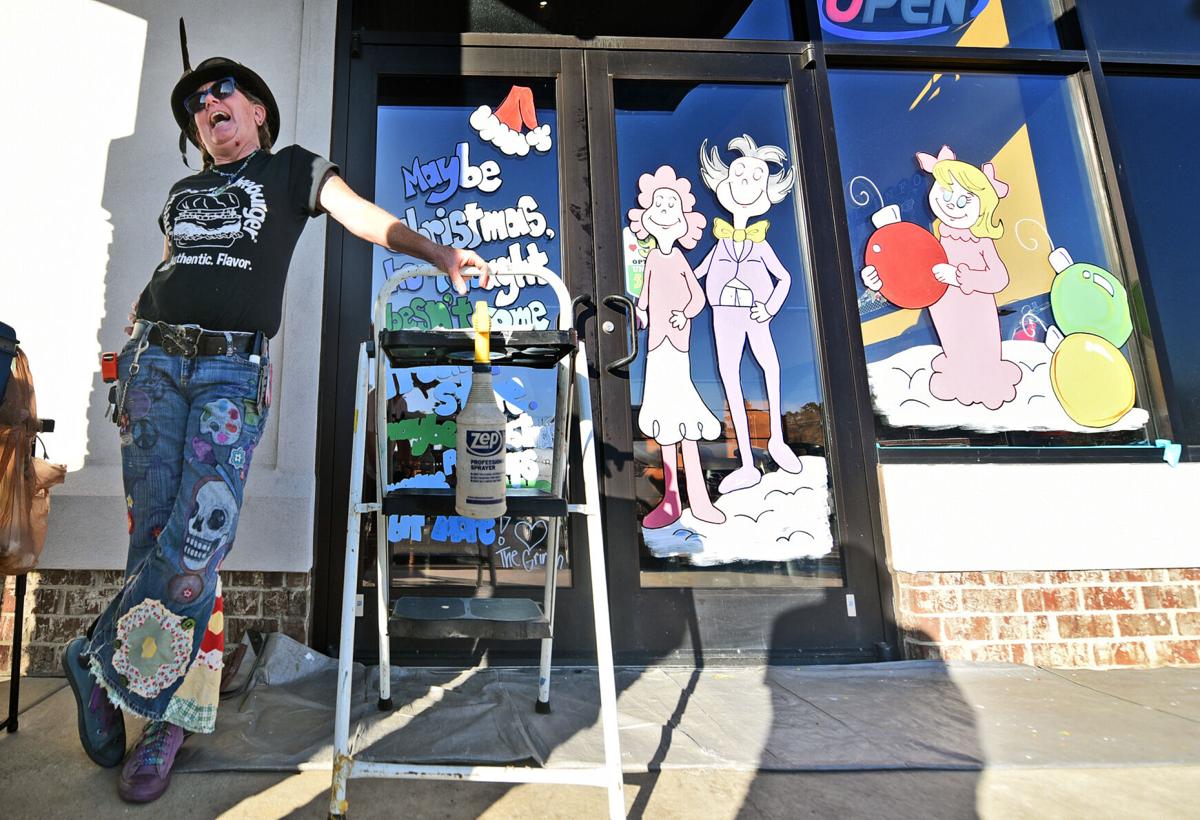 Melissa Rezabek of Off the Wallz Odd Ballz talks about her joy of painting windows on Nov. 17. 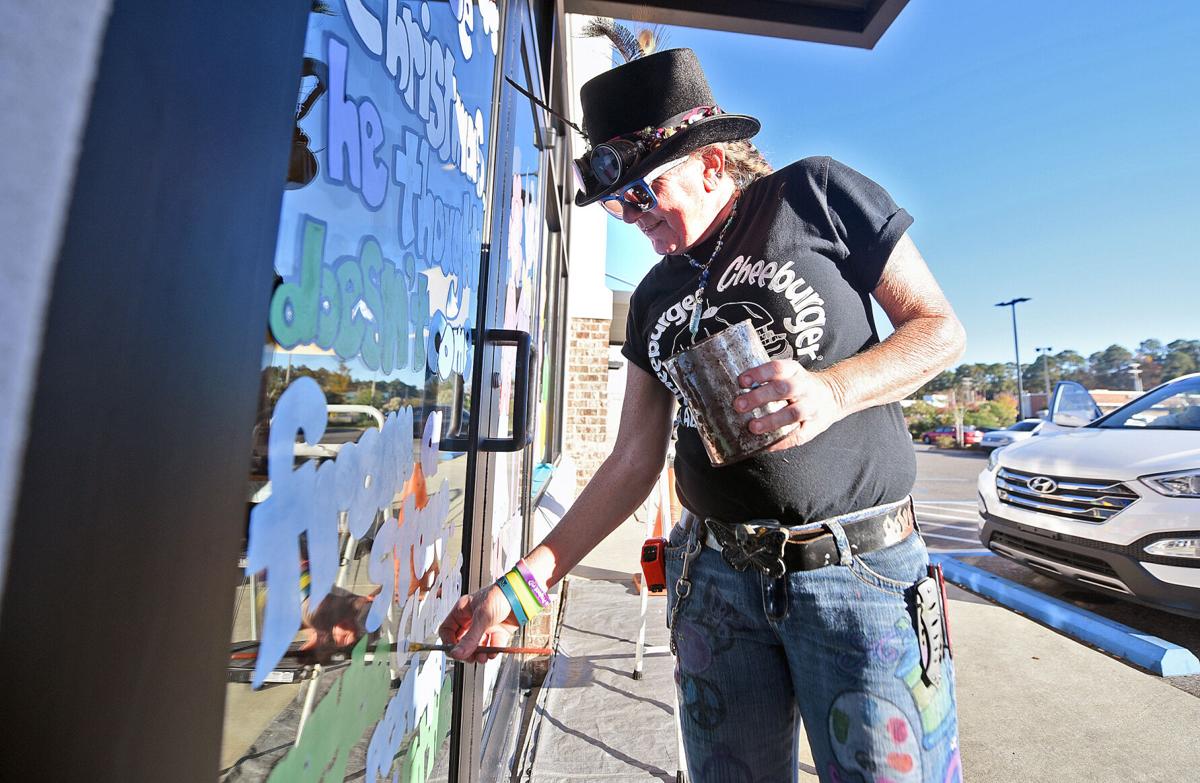 Melissa Rezabek of Off the Wallz Odd Ballz paints a Christmas-themed window at Barberitos in Dothan on Nov. 17.

Jack, her shepherd and Catahoula mix, stuck close to Hughes, but ventured out to sniff a delivery man or greet those who stopped to check out the large Christmas mural Hughes was painting on the windows of a building next to Wadlington Park in downtown Dothan.

“It is very relaxing and I like that I get to be outside,” said Hughes, an artist who operates under Eye Catchers Artworks. “A lot of times when I’m selling more artwork, I paint at home and it can be kind of lonely when you’re by yourself. But this, I get to socialize, I get to be in pretty weather.”

Hughes is just one of the local artists who paint seasonal window murals, and this year windows around the Wiregrass are full of holiday spirit as more merchants have turned to local artists to create colorful Christmas murals for their businesses.

Melissa Rezabek of Off the Wallz Odd Ballz has been painting and creating art pretty much her entire life. Rezabek has been painting window murals for local businesses for specialty holidays like Halloween and Christmas as well as seasonal murals. Her work fills the windows at Barberito’s in Dothan as well as Mr. Coffee Bean on Westgate Parkway and businesses in downtown Enterprise.

Dressed in painted jeans and a steampunk hat and goggles, Rezabek said painting the holiday murals is like coloring in an oversized coloring book. As an artist, she said she enjoys doing the window murals even for the social aspects of it.

At Barberito’s of U.S. Highway 84, Rezabek created a Whoville mural featuring Cindy Lou Who and her parents. Rezabek likes the colors of the characters and the memories they bring back.

Artists like Rezabek and Hughes use a high-quality exterior paint that won’t dry as quickly in the sun as well as special brushes that leave more paint on the glass.

If done right, a painted image will withstand the elements and could last for years.

The hard part comes when the holidays are over and the artists return to remove the murals from the window glass. Removal takes a lot of scraping with sharp knives. Both Hughes and Rezabek provide removal as part of the cost.

“By the time I’m done you won’t even know I’ve been there other than the memories,” Rezabek said.

Hughes’ mother used to paint window murals under the same Eye Catchers name that Hughes now uses for her own business. Painted window murals used to be more common but were replaced with vinyl signs. Hughes said interest has definitely picked back up in the last few years with people looking for a touch of nostalgia.

Since Halloween, Hughes has painted 34 window murals, including the ones down Foster Street on windows at Kiss My Axe, KBC, Stix & Cones and the building next to Wadlington Park, where an ice skating rink has been installed. Some of her murals are medium to large and some are really big – such as the one she did for the Ford dealership in Enterprise that features the Grinch driving a vintage Ford pickup pulling Santa in a sleigh.

“It’s always popular at Christmas, but this year has been a whole ‘nother level,” Hughes said.

The increased interest, she said, could end up keeping her busy throughout the year as merchants realize they don’t have to wait until Christmas. The demand for holiday murals is such now that all she can do is keep a “maybe” list of potential customers.

Hughes likes making her murals unique for whatever business she is doing them for. Her Stix & Cones mural features a red-nosed reindeer holding an ice cream cone while the Kiss My Axe mural features Santa throwing an axe at a target with a naughty list pinned to it.

Developing ideas for the window murals is a mixture of what the business owner wants and what Hughes comes up with on her own. She always recommends fewer and larger images for murals.

“I really do try to get the people to trust me as best I can, because it’s like a tattoo artist knows what he can do on skin,” Hughes said. “Sometimes people want real elaborate small stuff. Well, if you fill up a wall with small stuff it’s not as visible from the road when people pass to see it and it ends up making everything look cluttered.”

Hughes said she likes to meet people who enjoy the window murals. In the past, she has painted Christmas window murals in downtown Enterprise and encountered people who had specifically come out to see the windows just like people go out to look at Christmas lights.

“That was pretty cool because I do it for a living, but I don’t really think about how it’s like affecting other people’s moods,” Hughes said. “That made it feel more special.”

Skittles sells candy dispensing bed that retails for less than $2

Skittles sells candy dispensing bed that retails for less than $2

A Dothan capital murder suspect wanted in the 2020 shooting death of Christina Moore was arrested in Georgia by U.S. marshals Tuesday morning.

One arrest made in Pansey homicide

A woman faces capital murder charges as part of the homicide investigation stemming from a shooting in Pansey.

Katie Hughes of Eye Catchers Artworks paints a Christmas theme on a window in downtown Dothan on Nov. 19.

Melissa Rezabek of Off the Wallz Odd Ballz talks about her joy of painting windows on Nov. 17.

Melissa Rezabek of Off the Wallz Odd Ballz paints a Christmas-themed window at Barberitos in Dothan on Nov. 17.