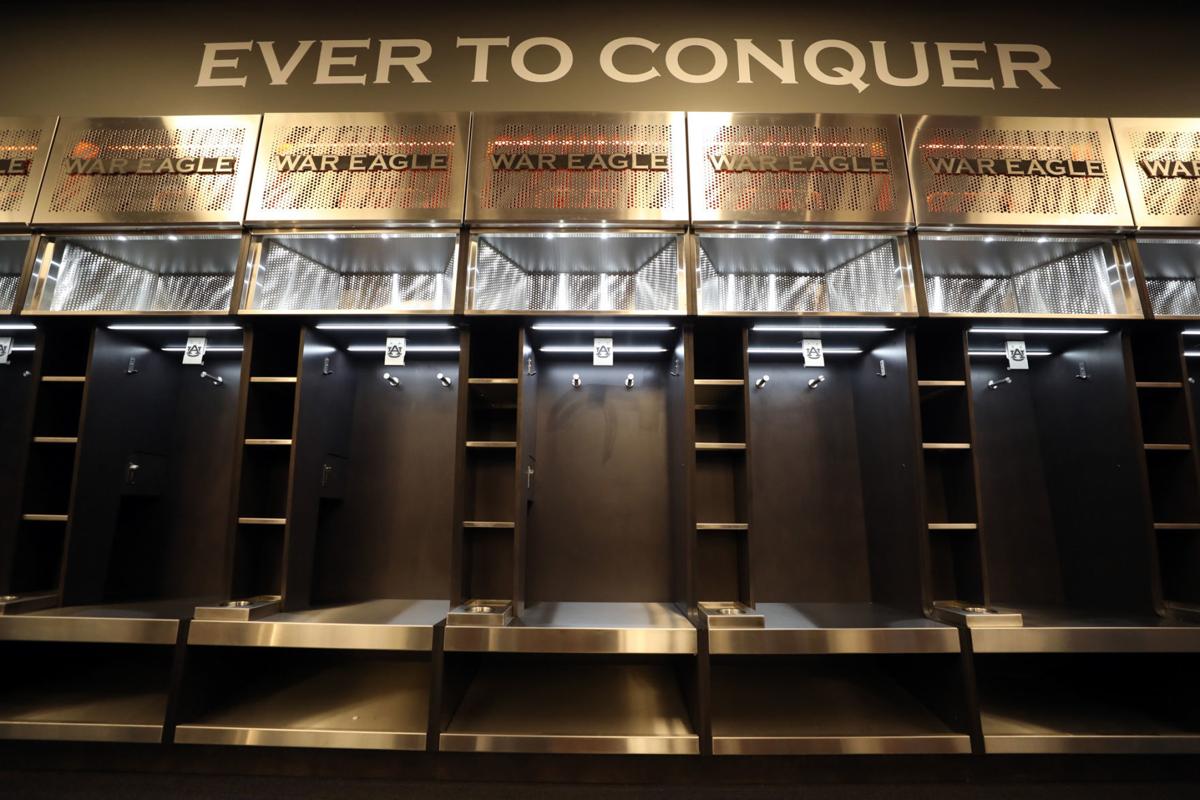 Auburn's empty football locker room, seen during a tour of the facility in August 2018, is thoroughly disinfecting hourly as part of the COVID-19 protocols. 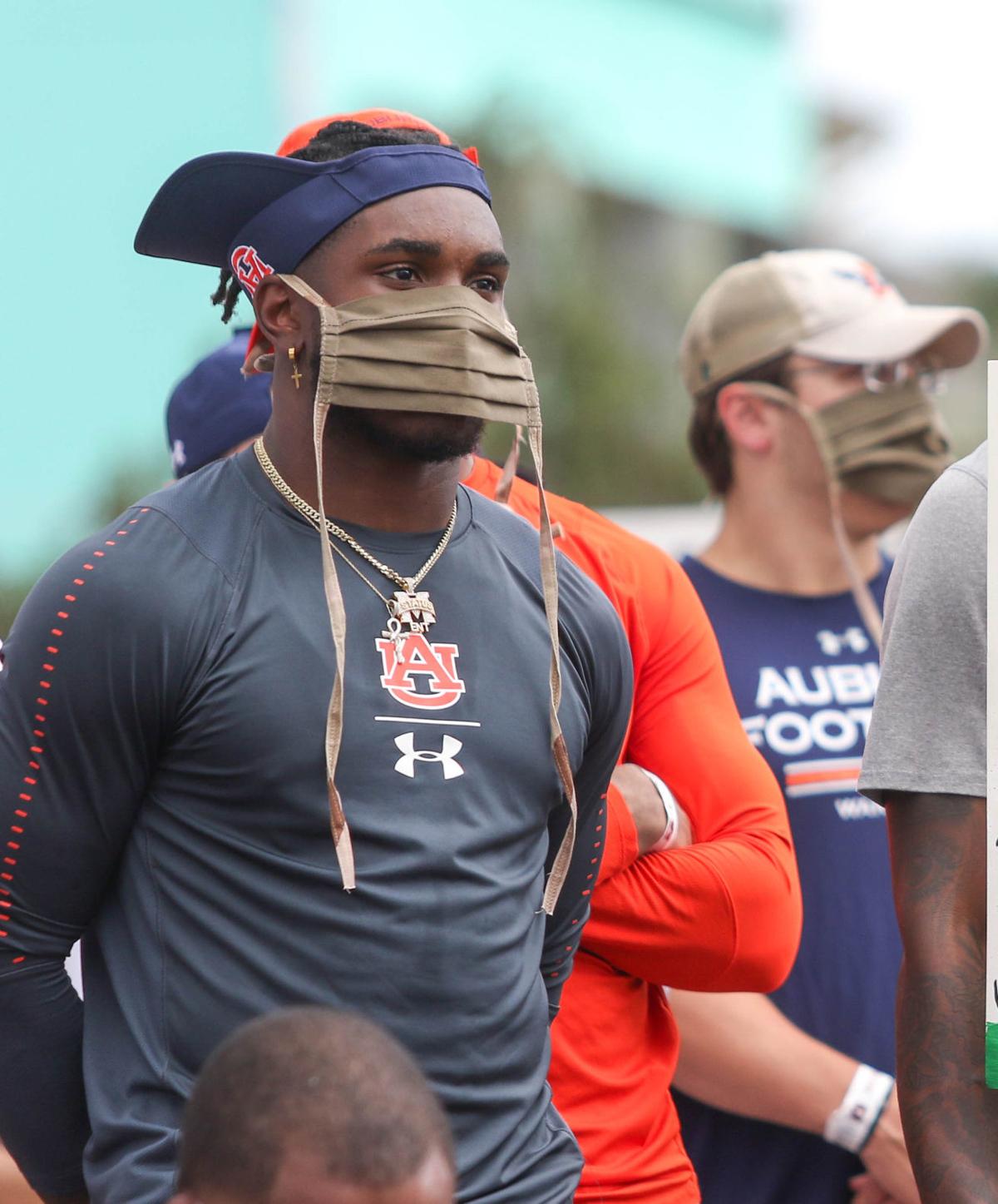 AUBURN — Coynis Miller could probably only laugh. He had to share it.

Auburn’s rising junior at defensive tackle hit retweet on a simple public service announcement last Thursday, as he was scrolling through his phone sometime between the rigorous contact tracing and the constant symptom testing that he faces every day on campus in the bubble with his football teammates.

“On behalf of every football player in America,” Clemson defensive lineman KJ Henry had conveyed on Twitter, “stop asking us if we’re having a season. We don’t know.”

It was a lighthearted exchange, but it still illustrates the distressing reality weighing on college football players across the country — and at Auburn — as the calendar inches closer to the start of the fall semester.

Auburn claims it has done ‘everything imaginable’ to keep the athletes safe as they’ve pushed through voluntary summer workouts for more than a month now, including sophisticated coronavirus antigen testing for players and staff, plus thorough disinfectant cleaning of the locker room, the residency halls, and other facilities.

But outside the walls of the Auburn athletics complex, coronavirus cases continue to soar, with effects felt just across town, where East Alabama Medical Center is straining to treat multiple patients hooked to ventilators and has a thinning percentage of hospital beds left open for patients in need.

The Auburn football team can only control what it can control, as the world around grips with the coronavirus pandemic. The Big Ten on Thursday announced its member programs would only play conference games this fall, if it plays at all. The ACC, expected to follow that lead per Stadium’s Brett McMurphy, could officially call off Auburn’s non-conference game with North Carolina in September if it makes the same move.

Or the SEC could call it off on its own. The league’s 14 athletics directors have been summoned to meet in Birmingham on Monday, according to Ross Dellinger of Sports Illustrated, in the wake of the Big Ten’s announcement and the move made by the Ivy League to call off all sports until January.

All of it was enough for Auburn quarterback Bo Nix to break his silence, elsewhere in that bubble. “Let’s play football,” Nix posted succinctly to Twitter on Thursday, surely seeing the dominos falling again around the country.

Auburn is doing its part to make it happen, internally. That testing and tracing is ongoing, detailed by a post to Auburn’s team website published Friday which revealed that the team’s locker room is disinfected hourly with an electrostatic sprayer, while painting the picture inside the bubble.

“We’re doing everything imaginable to make it a safe environment for them to work out and prepare to play,” Auburn team physician Michael Goodlett is quoted as saying.

Every player was tested for COVID-19 upon their return to campus for the workouts. Three players tested positive then. Auburn hasn’t publicly reported how many tests have come up positive since then, but Goodlett says there have only been a few positives and that the program has managed to isolate those infected and trace who they’ve been in contact with to do more precautionary testing. The positives are said to have been quarantined for 14 days while Auburn has performed further testing to rule out any cardiovascular damage.

“We haven’t had an overabundance of positives,” Goodlett said. “When we have had one, in every case it’s been limited to where maybe a roommate is also positive. But we’ve had no widespread clusters where one positive caused five cases or more.”

It’s those kinds of outbreaks that worry decision-makers — among players, among fans, among coaches and more — because every coronavirus case is another walking danger to people susceptible to the deadly virus.

And outside that locker room, getting deep-cleaned every hour, Auburn knows it can’t control what’s going to happen next.

Facing reality, the Tigers are simply doing their best.

Facing reality, they’re simply hoping for the best, too.

Auburn football added two new commitments for the class of 2021 over the weekend, both on the defensive line and both shoring up Rodney Garner…

AUBURN — Running back Malik Miller will not be returning to the Auburn football team this fall for his redshirt senior season.

Auburn's empty football locker room, seen during a tour of the facility in August 2018, is thoroughly disinfecting hourly as part of the COVID-19 protocols.