Alabama wide receiver John Metchie III (8) catches a pass and turns into the end zone for the game-winning score in the Tide’s 24-22 four-overtime win over Auburn at Jordan-Hare Stadium in late November. 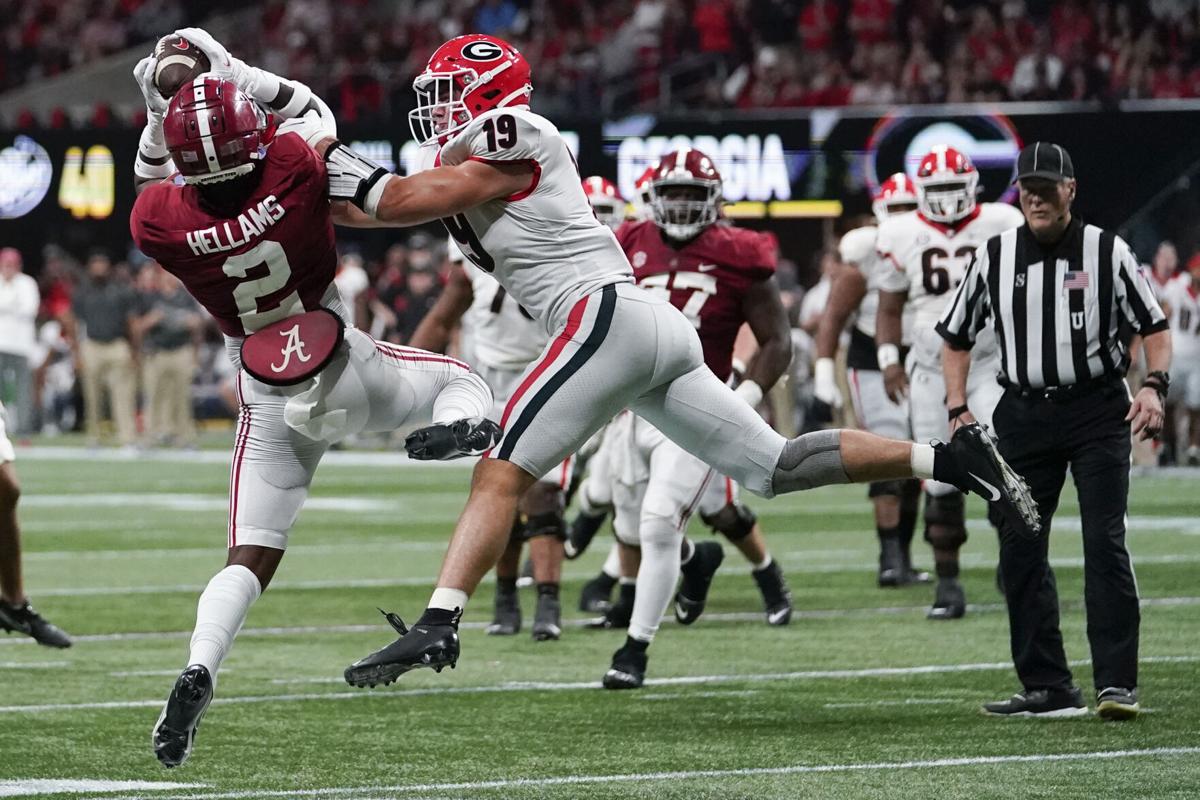 Alabama defensive back DeMarcco Hellams (2) picks off the ball intended for Georgia tight end Brock Bowers (19) during the SEC Championship Game in December. Hellams and teammate D.J. Dale announced plans on Friday to stay at Alabama.

Receiver John Metchie will enter the NFL Draft after hiring an agent, the William Morris Agency announced just before 4 p.m. CT. ESPN reported earlier Friday he was intending to forgo his fourth season for the professional ranks.

Metchie had 96 catches for 1,142 yards and eight touchdowns before tearing his ACL in the second quarter of the SEC title game win over Georgia. He first made his presence known as a sophomore catching 55 passes for 916 yards in Alabama’s national title-winning season.

He was the top returnee for 2021 and paired nicely with Williams, the Ohio State transfer. Metchie caught more of the short to intermediate routes, thus his catch count was 17 higher than Williams despite playing in two fewer games. The Canadian import had four 100-yard games, just missing his fifth when going down with his ACL injury with 97 yards on six catches in Atlanta.

Alabama will have a lot to replace without Metchie, Williams (79 catches, 1,572 yards) and Bolden (42 catches, 408 yards). Traeshon Holden is the top returning receiver currently on the roster with 21 receptions and 239 yards.

Alabama defensive lineman DJ Dale and safety DeMarcco Hellams have decided not to enter the 2022 NFL Draft and will return to Alabama for their senior seasons.

The two both cited wanting to win a national championship as part of the reason for wanting to return. Alabama lost in the college playoff national title game this past Monday to Georgia 33-18.

Dale made his announcement Friday in an Instagram post writing, “We didn’t end this season the way we wanted to and there is still work to be done.”

“When I chose to come to the University of Alabama, I had three main goals — get my degree, be a leader for my teammates and win multiple championships. I still need time to take care of all three, and I can only do so by staying one more year. I can’t leave now, knowing that I didn’t stay true to my goals.”

The decisions by the two Tide defensive players came after inside linebacker Henry To’o To’o, who like both was a junior and eligible to enter the NFL Draft, decided to return for his senior season.

Two other juniors on Alabama’s defense, linebacker Christian Harris and safety Jordan Battle, have until Monday to decide whether to enter the draft.

Dale, who played high school football at Clay-Chalkville in metro Birmingham, will enter 2022 as one of Alabama’s most experienced players. He is a three-year starter along a defensive line that will lose Phidarian Mathis to the NFL Draft this offseason.

Hellams, from Washington, D.C., became a starter late last season and continued in that role this season opposite Battle. The 6-foot-1, 208-pound Hellams earned 87 tackles this past season, including 54 solos, while also recording three interceptions and six pass break-ups. In 2020, he was in 62 tackles, 36 solos, and had three pass deflections but no interceptions.

A few weeks after celebrating a national championship, Jermaine Burton will join the Alabama revenge tour.

Alabama battles back to beat Missouri

The timeout hit right before the five minute mark in the second half, and the chants began.

The search for a cure to Alabama’s recent losing streak turned to individual meetings this week.

Alabama quarterback Bryce Young on Tuesday was named the 2021 winner of the Manning Award.

Alabama inside linebacker Christian Harris became the school’s sixth underclassmen to declare for the NFL draft.

Braxton Bradley, an 18-year-old student at Carroll High, got the surprise of a lifetime Thursday during a history class when University of Ala…

TUSCALOOSA — Alabama had a prime opportunity Wednesday to show it had the toughness coach Nate Oats has coveted.

INDIANAPOLIS — New names seem to appear in the NCAA transfer portal daily, leaving little doubt how different of an era we’re in of college football.

Alabama wide receiver John Metchie III (8) catches a pass and turns into the end zone for the game-winning score in the Tide’s 24-22 four-overtime win over Auburn at Jordan-Hare Stadium in late November.

Alabama defensive back DeMarcco Hellams (2) picks off the ball intended for Georgia tight end Brock Bowers (19) during the SEC Championship Game in December. Hellams and teammate D.J. Dale announced plans on Friday to stay at Alabama.